On June 8, 2019 a number of hate and patriot groups participated in a Yellow Vests Canada rally in downtown Hamilton, Ontario, including Soldiers of Odin, Wolves of Odin, Northern Guard, Canadian Nationalist Party, and Proud Boys.

1. We’re gathering what we can from #HamOnt today, but I wanted to share a few quick screencaps.

Here’s Soldiers of Odin with members of the white nationalist Canadian Nationalist Party.


If this seems excessive, that's because on June 1, 2019 the same Hamilton Yellow Vests, led by Lisa Thompson, held a rally in downtown Hamilton and were met with anti-fascist counter protesters. Sources, and social media, confirmed that the Hamilton YV's asked various chapters of Soldiers of Odin to provide "protection." What resulted was a charge attack on counter-protesters, with one person in attendance having their mask ripped off and glasses broken.

Nouns of Odin & NoWank Boys showed up for the #YellowVestsCanada rally in Hamilton today. they attacked counter-protesters, including one person who was forcibly unmasked & had their glasses broken. YV members were using FB yesterday to post threats to anti-fascists. @VestsCanada pic.twitter.com/8GmnReObwu
— Bob Nesta Makhno mistake🏴 (@GilletteMachNo) June 2, 2019 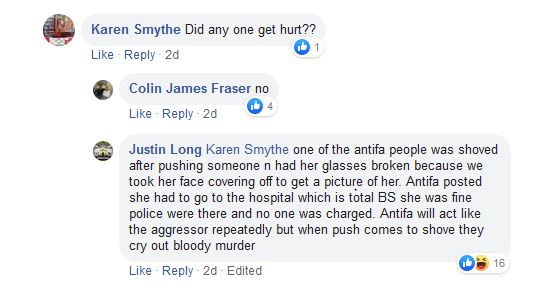 The Hamilton YV leader, Lisa Thompson, is pleased with herself.

Based on previous social media posts it seems this was pre-meditated, and SOO was there to act as enforcers: 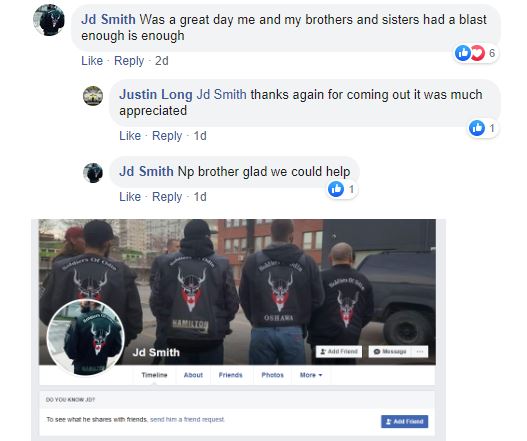 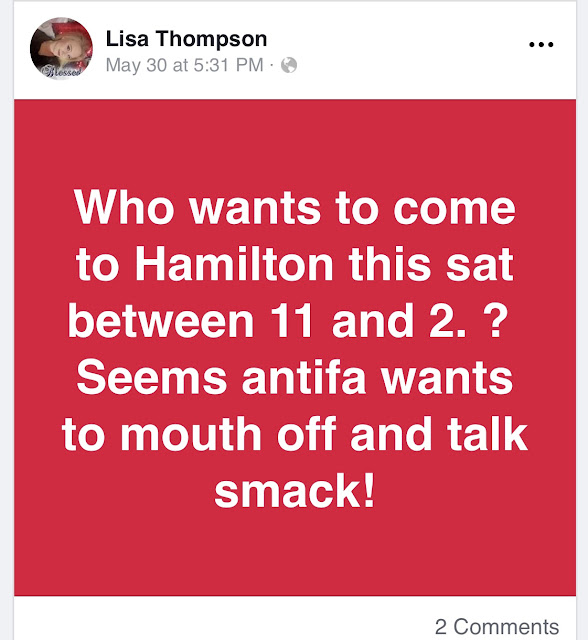 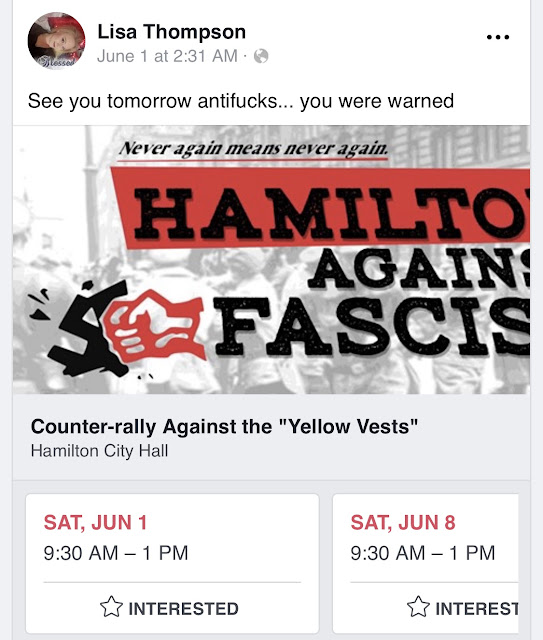 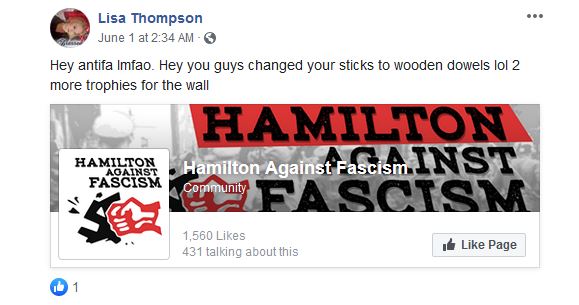 This even resulted in blanket threats for future stalking and attacks:

This brings us to today. Earlier this week we were tipped off that Hamilton YV's were planning on bringing out larger numbers, again as "security," but obviously because they were actually hoping for violence. Sick bunch.

Thompson's social media screeds are a clear indicator that she's looking for trouble.

i think she's upset? take a break, love, spend some time with your child, go for a walk with your dog, cook some good food for yourself, remember to breathe. have you tried yoga? pic.twitter.com/1fpPFNDcUX
— Bob Nesta Makhno mistake🏴 (@GilletteMachNo) June 6, 2019

This resulted in a large showing of the far-right, including Andre Chiasson of the Canadian Nationalist Party (who recently lit a Quran on fire at a Pegida rally with various hate group members,) Ed Jamnisek (of Northern Guard and C3,) Rick Boswick and Derek Storie of Pegida, Tim Kelly of the Proud Boys, and more, including Justin Long, who previously posed with Paul Fromm:

1. We’re gathering what we can from #HamOnt today, but I wanted to share a few quick screencaps.

Here’s Soldiers of Odin with members of the white nationalist Canadian Nationalist Party.


One person, wearing gloves, a helmet, and a protective vest, was removed by police, and held back by a man wearing a Wolves of Odin sweatshirt:

At least one guy was removed by cops. He wore a protective vest and a helmet, clearly looking for a fight. He was held back by another guy in a protective vest, whose sweatshirt says Wolves of Odin on the arm. pic.twitter.com/dWaeyBMZBd
— Yellow Vests Canada Exposed (@VestsCanada) June 8, 2019


They weren't without their meltdowns:


Derek Storie was his usual charming self, joking about throwing people in front of buses:


While Rick Boswick bragged that the cops are on their side, and Storie claiming that as soon as people hit the side walk it's "throw down time."

Also, that’s the same mask CNP member Andre Chiasson wore to the last PEGIDA rally, where he lit a Quran on fire.

There were some scuffles; a journalist and activist who was present intervened when a group of SOO rushed a female photographer. According to a post to Facebook, he was briefly detained and released. Despite this, and despite no video evidence to the contrary, Boswick/Storie and Wayne Peters claim to have his arrest on film. Peters shared "video" of it to his conspiratorial Yellow Vests-related group What's Up Canada. 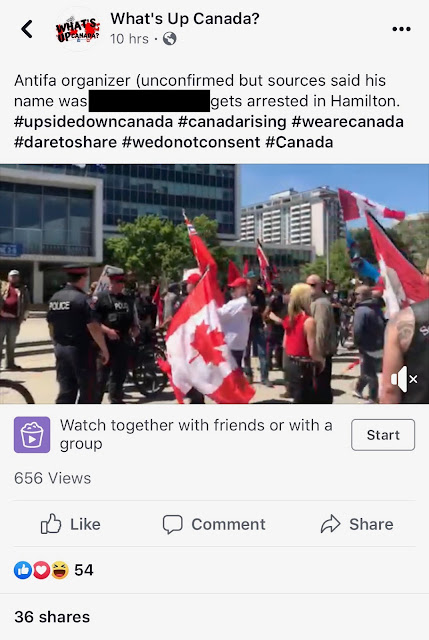 This is a developing story and will be updated as necessary.

Im 77yrs old & I wish I could join your group. We need thousands like you.