There has been more media coverage of the assaults that took place at the Pride event in Hamilton this past Saturday:

According to witnesses, yellow-vested protesters — who have been regularly staging gatherings on Saturdays at City Hall — along with religious extremists, converged on the annual Pride Hamilton event Saturday afternoon at Gage Park.

This led to numerous brawls and shouting matches. Several individuals were led away by police, but no charges laid.
....
Former Hamilton councillor Matthew Green said a group of Gage Park area residents — in support of the event — brought a 15-metre long black curtain to try to block attendees from seeing the homophobic signs.

He said last year's celebration — which he also attended — saw "a group of ultra-right religious people attending for three or four hours spewing vitriolic and hateful language ...
"This time they didn't come by themselves. They came with some of the yellow vest ... fascist people, dressed in combat gear and were there specifically to escalate into violence."
....
The City Hall protests and the one at Gage Park, he added, are attracting extremist right-wingers from outside the city.

"I think we have a very real and present problem ...

"We have people coming in from across the country seeing Hamilton as fertile ground for a new neo-Nazi movement. And the response politically has been lacklustre."

He said the police need to lay charges more often, rather than taking an approach he described as "holding the line, but not necessarily enforcing the law."

By Sunday ARC and others began trying identify the Christian extremists, Yellow Vesters, and Canadian Nationalist Party members who were present at this protest as well as an anti-Trans protest occurring in Vancouver at the same time which featured one of Max Bernier's PPC candidates with the Nouns of Odin providing "security."

Now thanks to an anonymous supporter, we have some high resolution images.

Probably the most aggressive and violent individual was the individual who on Facebook used the name "Might Guy": 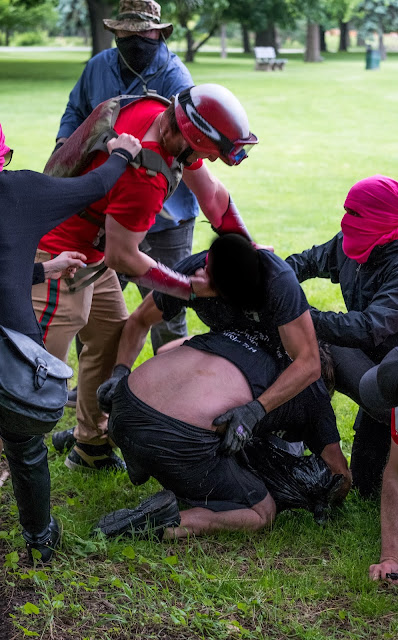 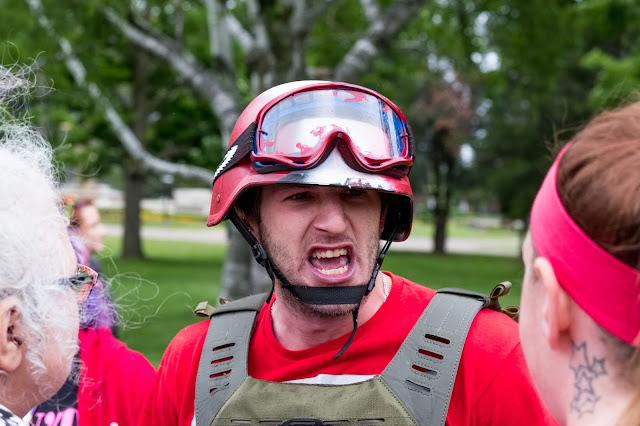 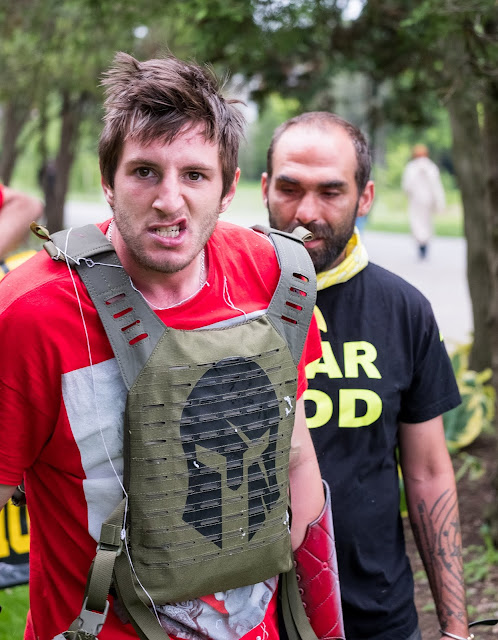 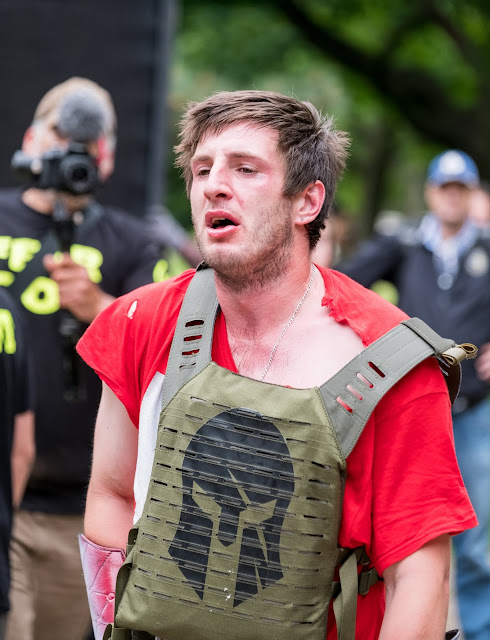 We believe that "Might Guy" the person that assaulted two people at Hamilton Pride has been identified. Chris (Christopher) Vanderweide of Kitchener, Ontario. #yellowvestscanada#cdnmedia@HamiltonPolice need to view the footage and look into this individual. pic.twitter.com/p0TquYnp4c
— Yellow Vests Canada Exposed (@VestsCanada) June 17, 2019

UPDATE: His real name looks like it may be Ylli Radovicka: 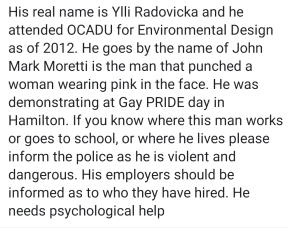 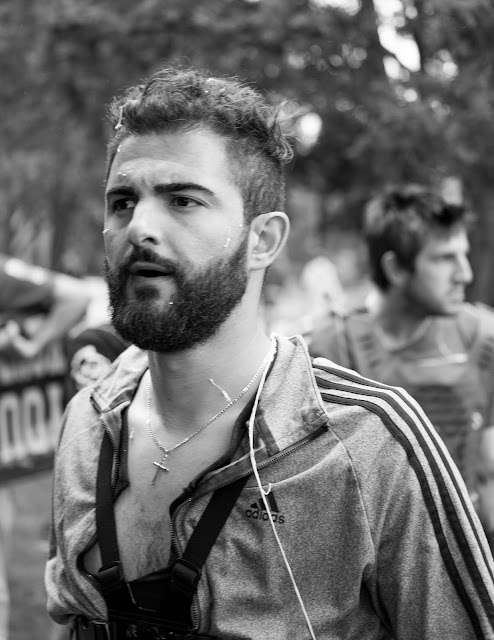 Hate "preacher" Philip Ness-Thomas loudly accused the counter-protesters of engaging in violence as his own members assaulted them: 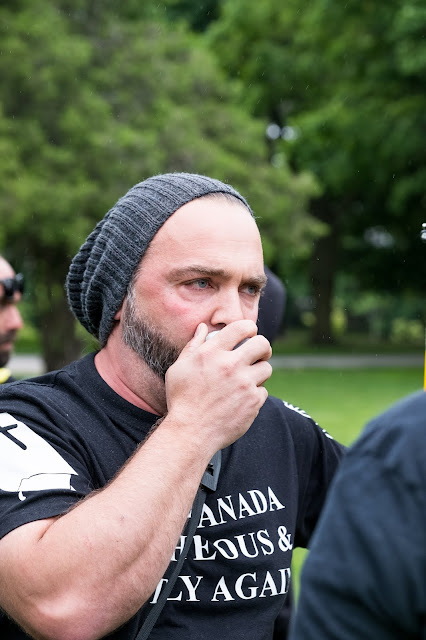 Rick Boswick and Derek Storie provided very useful coverage of the attack, though they actually seem to believe that is supports their claim of being victimized (it decidedly does not): 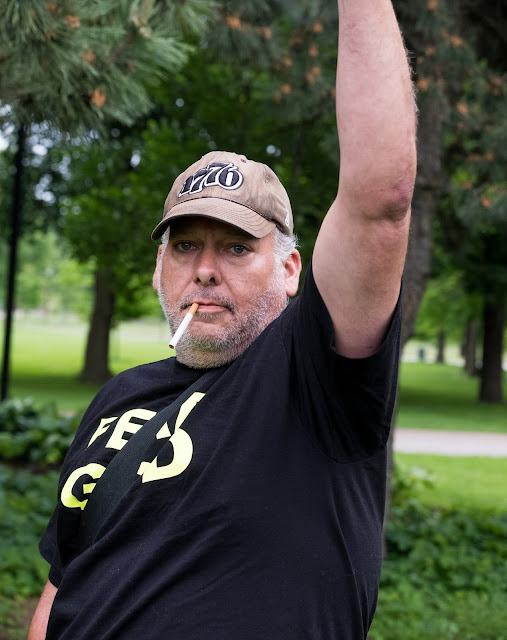 Now ARC would like to ask readers to help identify other members.

For example there are these two individuals (UPDATE: Guy in white t-shirt goes by the name Tomek Skii): 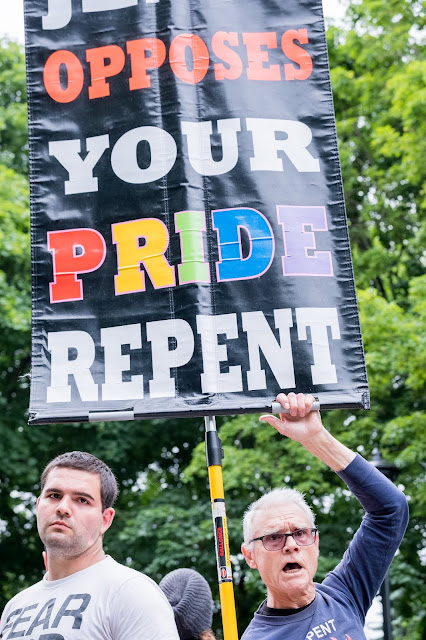 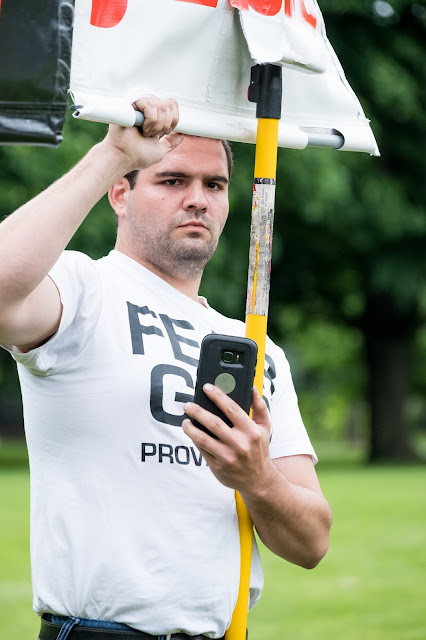 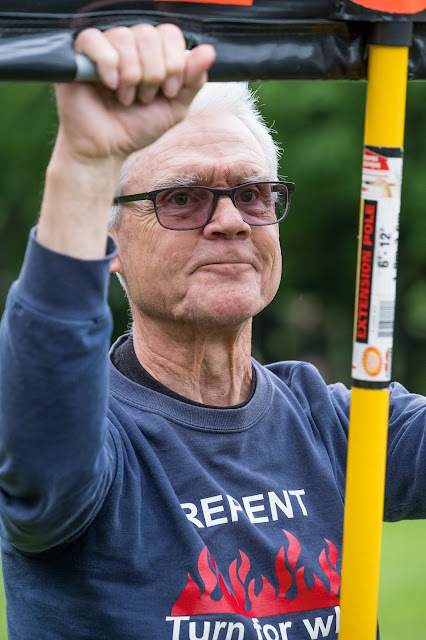 This dude who looks like he's going to blow a gasket (UPDATE: Fabian Castillo): 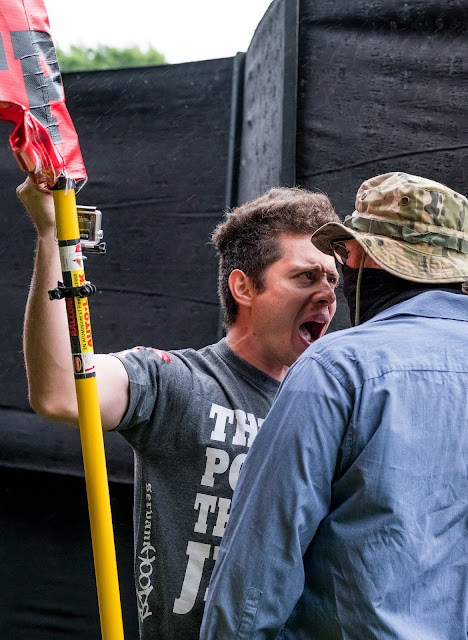 This lady in a hoodie auditioning as an extra for "The Nun": 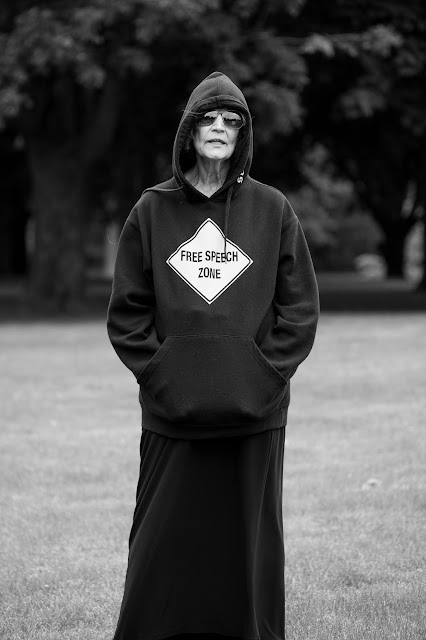 UPDATE: Goth Granny (which would be an awesome name for an actual grandma or an industrial metal band) has been identified as Darlene Burgess: 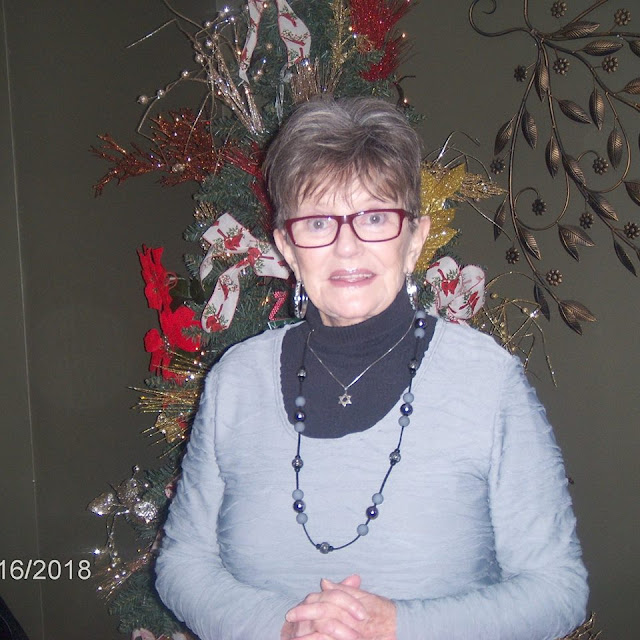 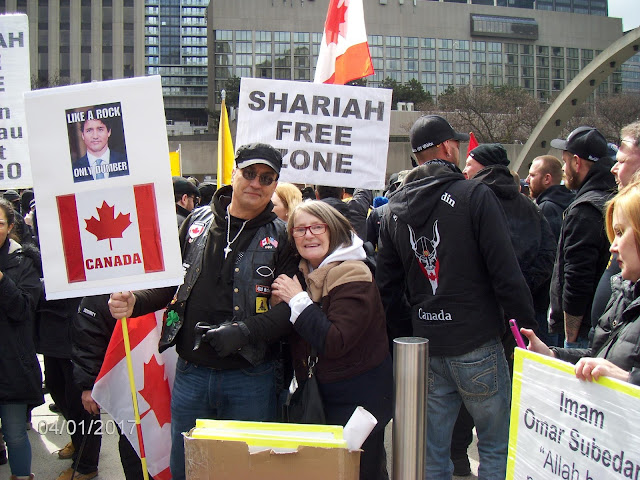 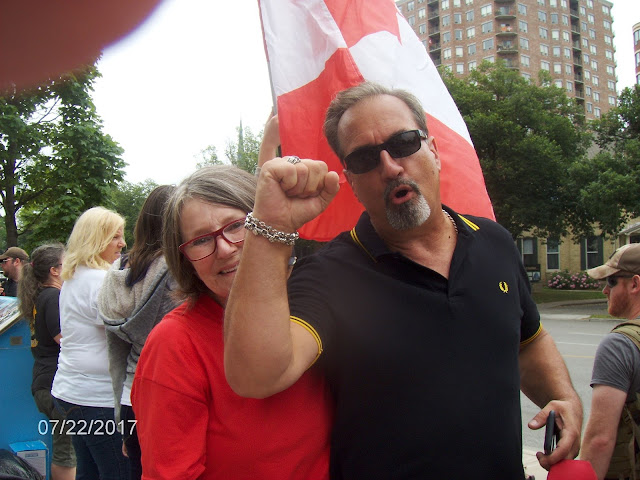 Burgess also seems to be suffering from a serious case of cognitive dissonance: 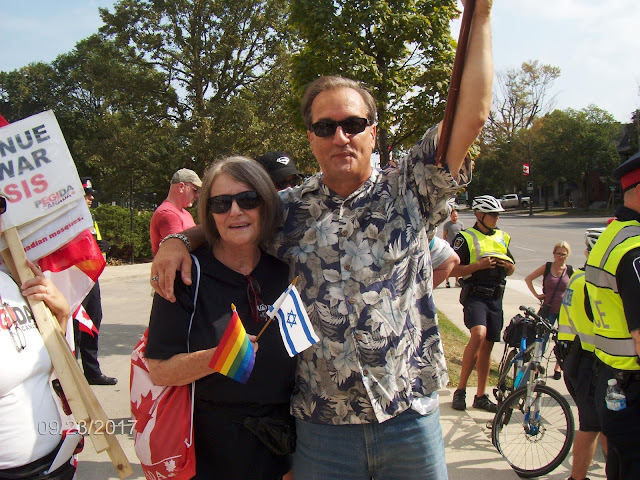 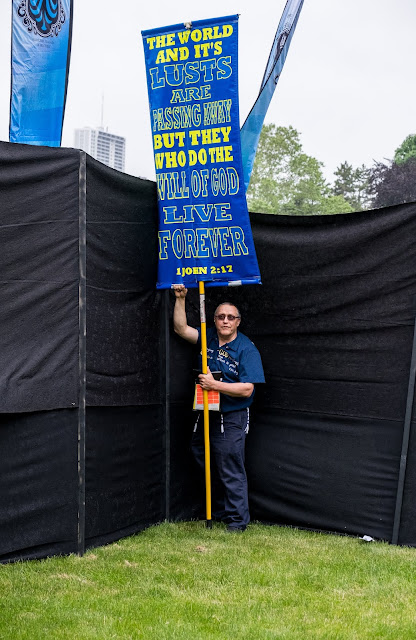 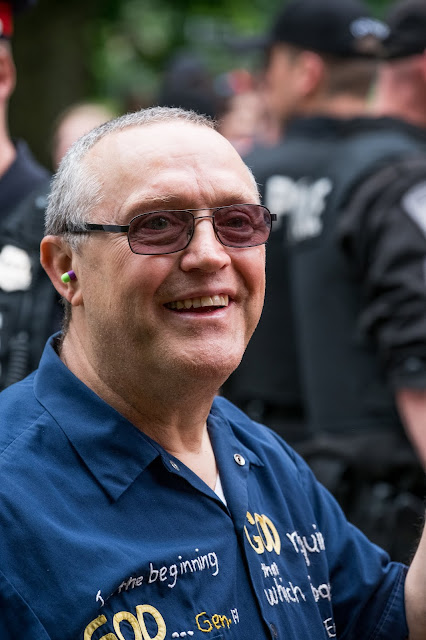 I thought only cowards wear masks?

UPDATE: No name yet, but this seems to be the guy:

And this guy who is just happy someone invited him to something: 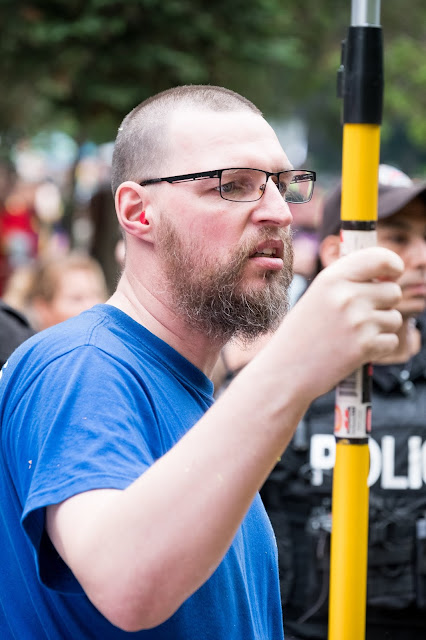 We also have representatives from the Canadian Nationalist Party who helpfully identify themselves by their cheap shirts: 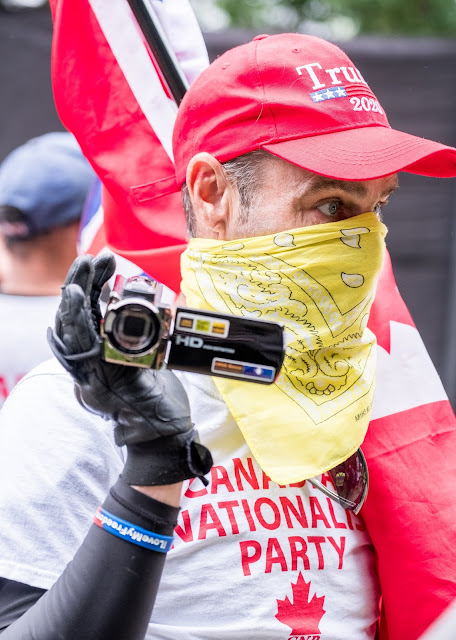 
These are all people we need to identify. One other CNP member whom we don't have a high definition photo of is this fella whom we may have a partial ID on: 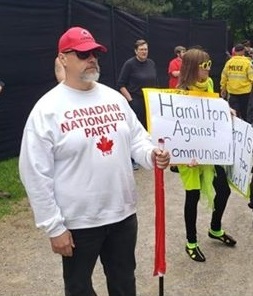 According to a video posted on the CNP YouTube channel promoting (you won't be shocked) the Yellow Vest movement, the character above idenities himself as Gus:

So folks, let's do some work, shall we?

I'm not about to hold my breath, but hope springs eternal

UPDATE: More folks that I didn't catch the first time.

"Lawrence" is ubiquitous at these sort of events. Here he is being taken into custody, though it seems he was released soon after.

No mention made of the "masks"worn by the "others"

Also very strange to hear that none of the phones had sound,so no conversation to base opinion on

Thank you for your work