Ron Banerjee: "Let's get into a big fight right inside the Eaton's Centre." Attack After Pegida Rally Looks Pre-meditated

We're still going over the events that occurred after yesterday's Pegida rally. Ron Banerjee who was also in attendance (though we didn't know it at the time) posted a grainy video of an attack inside a Toronto mall:


We later learned that the mall was the Eaton's Centre.

Later in the evening Rick Boswick and Derek Storie alluded to other coverage of the event in which they admit to committing assaults in the guise of a "citizen's arrest."


That video was posted on Boswick's YouTube channel and it doesn't make them look good. 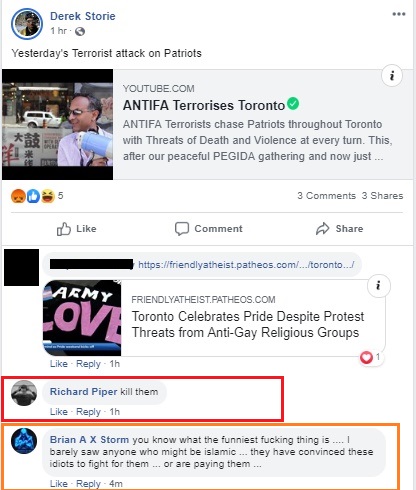 I've cut out most of the walking (there's a lot of walking) but kept in the relevant details including:

It is hard to view this as anything but pre-meditated at this point:


And of course, they are happy as pig in shit: 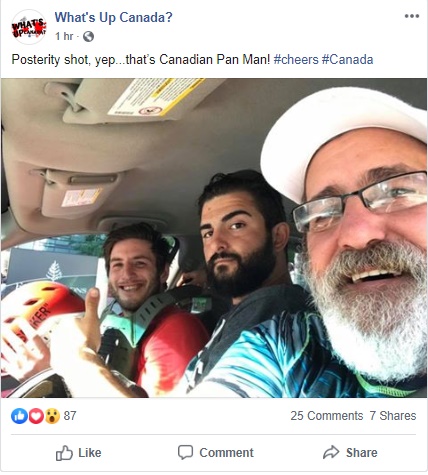 UPDATE 1: More indication from the video that the far-right were planning on assaulting counter-protesters:

UPDATE 2: Seems that some of the Nouns of Odin, aside from Chris Vanderweide decided not to attend the Pegida rally due to animosity towards some people involved.

Annette Morrison is the "alpha" or "queen" of the Wolves of Odin (because 1. they all need ridiculous, self-aggrandizing titles and 2. none of these groups are especially original). We also learned that Chris Vanderweide appears to have deleted his Facebook profile which we find especially interesting.

UPDATE 3: We have a statement from the man who was taken to the hospital.


As is visible from the video and security footage, all I had done was usher families away from the Nazis within the centre, and got suckerpunched after picking up one of the signs they dropped. I did not make any effort to fight back, instead allowing the attack on camera to unfold. You can clearly see me stop Ylli Radovicka (AKA John Moretti) from utilizing the sharpened metal pole he had used as a weapon on others by grabbing the weapon and refusing to let go.

What's not visible on video is Chris Vanderweide taking swings at passerby, including at a security guard's head which I stopped by reaching behind the guard and blocking the piece of wood with a cross he was carrying. That particular security guard thanked me for my actions.

Not only did I not engage in criminal conduct, but Radovicka, Vanderweide, Boswick, and the CNP had done so on camera whilst facing criminal trials for threatening journalists. As i stated before security brought in paramedics to check me over, Christ-inspired nonviolence towards evil has resulted in a theatrical victory against neo-Nazism. 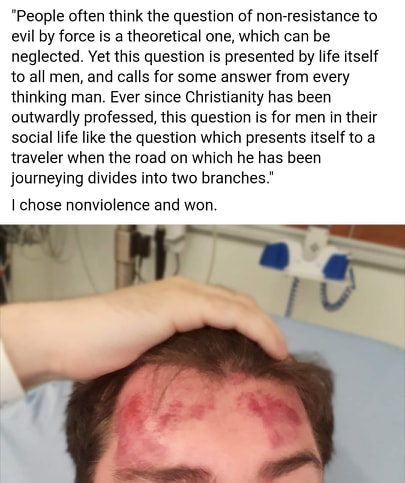