In light of PEGIDA Canada's Jenny Hill's failed attempt to crowdfund for her $11,000 judgment, we thought it prudent to bring to the public's attention another PEGIDA related GoFundMe that deserves similar attention and action.

Yellow Vests Canada members, PEGIDA supporters, general hatemongers, and self-professed "Domestic War Reporters" Rick Boswick and Derek Storie also have a GoFundMe campaign to fund their "Facts vs. Feelings" podcast. (Note: we are unclear how they reconcile this name with the fact that they are driven entirely by their emotional response to people who are different from them, such as women who don't want to be pregnant, LGBTQA+ folk, and Muslims.) At least Boswick has moved on from being the VP of the Canadian Combat Coalition.

Special thanks to the National Observer for covering this from a more mainstream angle. We were happy to work closely with them on the piece. You can read it here.

I asked about Kevin Johnston's GoFundMe, which he set up after losing a $2.5M defamation suit (GoFundMe took it down). Did you know Canada's alt-right frequently use crowdfunding to raise $$ to spread hate? Many pose as journalists

Let's break down some recent episodes of Facts vs. Feelings where they give a platform to hate groups, Islamophobes, and neo-Nazis.


2) In support of anti-Muslim hate group the World Coalition Against Islam. Also in this video is footage from Islamophobe Kevin J. Johnston who still faces hate crime charges.

3) An interview with noted neo-nazi and white supremacist Paul Fromm. The discussion centered on what they feel is the "persecution" of James Sears, of the racist, anti-Semitic and misogynist Your Ward News, and his hate crime charges. It should be noted that Hamilton law enforcement is also investigating Fromm as a result of his distribution, and agreement with, the Christchurch shooter's manifesto.

4) The pair use footage from alt-right white nationalist Lauren Southern.


5) They were interviewed by white nationalist Faith Goldy.


7) They harassed people, Westboro style, in Ottawa during Winterpride.

The pair recently appeared on a Facebook live with Winnipeg Alternative Media/Todd MacDougall, an "alternative" news Facebook page run by a Proud Boy that claims to be libertarian but is really just an alt-right, super budget version of what Boswick and Storie do. Now that's saying something.

Anyway, they appeared on MacDougall's "show," and confirmed they are unemployed drifters, after complaining that ARC has called them... unemployed drifters. Aren't these the same people who complain about how refugees aren't contributing to our economy?

They also admitted to exploiting their indigenous heritage to deny the claims that they're Nazis. (You can still hate Muslims and be indigenous.)


More to come on WAM and MacDougall at a later date.

Boswick and their friend Cory Scott are now potentially facing charges for uttering threats, due to this video, where they threatened an anti-racist activist and journalist with violence. 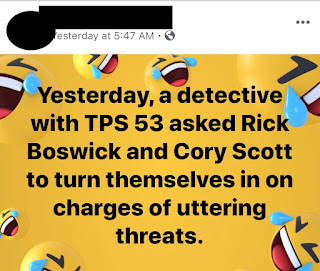 They also stalked and harassed this individual outside of the Brampton courthouse:

#YellowVestsCanada / PEGIDA members (& assoc w other hate grps) Boswick and Storie stalked and harassed @kbmetcalf as he was leaving the Brampton courthouse, due to his lawsuit against Islamophobe Kevin J. Johnston, separate from his hate crime charges. /1#cdnmedia #cdnpoli pic.twitter.com/DnEdS0fevT
— Yellow Vests Canada Exposed (@VestsCanada) May 11, 2019


GoFundMe needs to remove this campaign, and stop allowing hate groups to crowd source on their platform. Please report this campaign to GoFundMe, citing the information provided.

Please report this campaign for violating their terms of service.

their "indigenous heritage" is extremely dubious, and most likely tied into one of the fake metis groups that sprang up in the last decade. Most of them are white racists who want to poach, and don't want to pay taxes on their darts.