Old Is New Again: Some Members of Far-Right Attempt To Have Ideological Opponents, Media, and Politicians Jailed

Ladies and gentlemen, I give you the "apex" of far-right "patriot" journalism in Canada:


Yep, this is a clip of a drunken Rick Boswick, Derek Storie, and Corey/Kory.... Something-or-Other (I genuinely can't be bothered to look up his last name) defaming a journalist who has already been assaulted by the far-right, complaining about the violence they claim to be subjected to, and talking about bringing paintball guns loaded with glass marbles to shoot at counter-protesters.

In any case, the boys here have been rather busy. On weekends they organize Poorly attended Yellow Vest protests on an overpass outside Toronto. They also found themselves the focus of a national news story when, in their Yellow Vest attire, they heckled PM Justin Trudeau and Toronto mayor John Tory during a news conference concerning affordable housing: 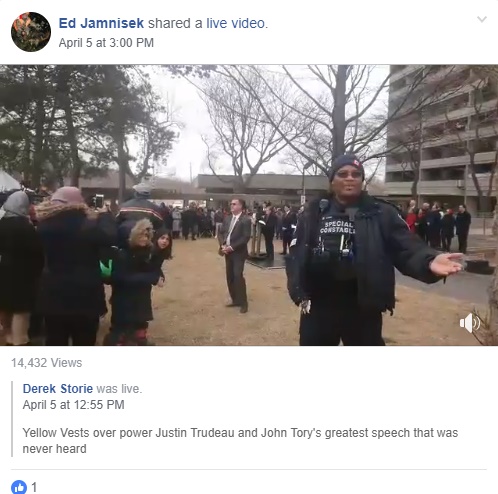 As a bit of an aside, I'm not sure complaining about being called white supremacists then going ton to complain about minorities and the persecution of white people (in addition to the New World Order conspiracy theories) really help your case much:

However, the Pegida protest in Toronto on March 23 is what has Boswick and Storie all riled up, especially this tweet from John Tory:

It should be noted that the Pegida Canada rally came hot on the heels of the murder of 50 Muslim worshipers in Christchurch, New Zealand. A couple of days prior to the Pegida Canada rally in Toronto, Faith Goldy and her drones appeared at an anti-racism rally and memorial for the Christchurch victims intent on antagonizing the attendees; Bowswick and Storie came after Goldy's group left.

In fact, both the Pegida Canada rally and the harassment of the memorial were discussed when Goldy interviewed both Boswick and Storie.

Before I post this though, a brief open letter to Faith Goldy.

Hi Faith. May I call you Faith?

You and I need to talk about life choices.

For example, you went from someone who interviewed the now leader of Her Majesty's Official Opposition and, perhaps, future Prime Minister of Canada to being kicked off most social media platforms as a white nationalist and interviewing two unemployed drifters during one of their moments of sobriety while they ranted on about New World Order conspiracy theories.

In the dark hours of the evening, and you experience the Dark Night of the Soul when you can't sleep and find yourself staring at the ceiling, do you ever wonder where it all went wrong Faith?


Boswick and Storie present a narrative of the Pegida members being the victims of unprovoked attacks on March 23. While it certainly was a raucous event with Pegida members outnumbered by 10 to 1, the story isn't really quite as clear cut as the two make it out to be:


Still, this particular bug has really gotten up their butts.

In the they posted where they are heckling Trudeau and Tory, you probably heard Boswick, Storie, or both talking about some sort of legal challenge. They discuss it in slightly more detail at one point:

That's right. They think they can prosecute Tory for a tweet and destroy "antifa" because.... freedom I guess: 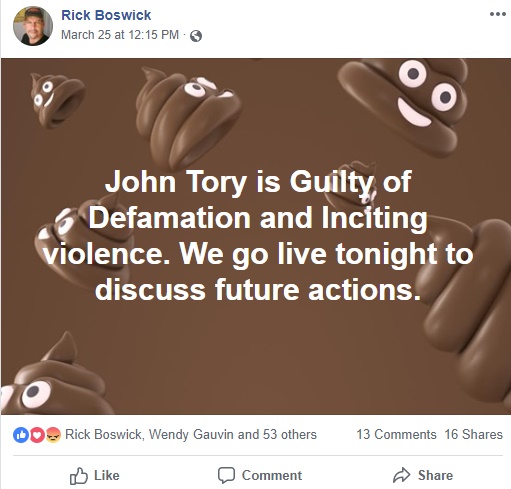 So, how does that work? George Soros pays in cash or does he have to write individual checks? The logistics seems rather impractical. And $19 is a very specific number which makes me curious whose fevered dream it originated from.

None of this is especially new. In fact none of it is new. ARC has been threatened with lawsuits and arrests throughout the existence of this blog including a recent threat from Kevin "No Show" Goudrean and CCC leader Dan Dubois for, you know.... posting exactly what they say and write.

Others have also jumped on the bandwagon lately. For example the anti-immigrant, anti-Muslim, conspiracy theory promoters in the III% militia are currently crowd sourcing for a deformation suit. 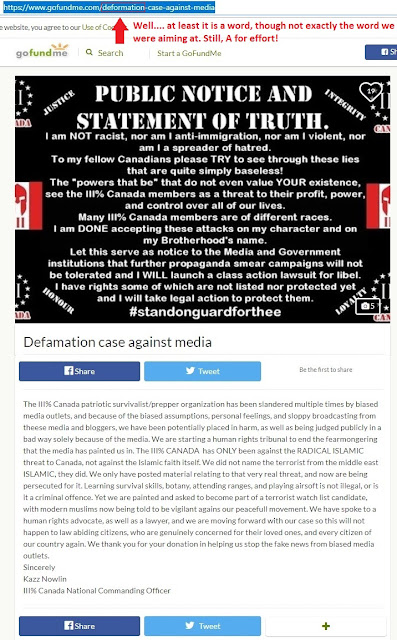 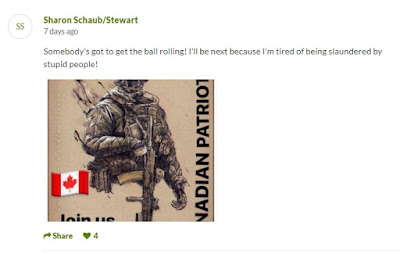 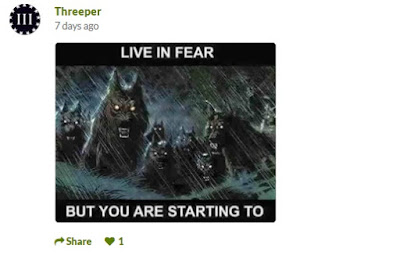 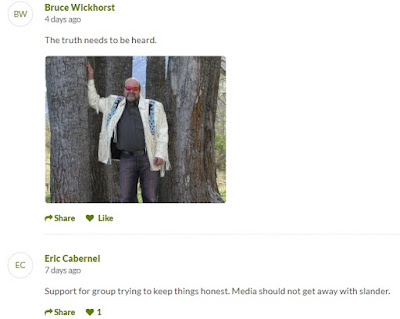 I know. Petty, especially considering my own frequent spelling errors on this blog. What can I say? I'm quite comfortable as a hypocrite in this matter.

My favorite part though is when I read the missive that Kazz posted: 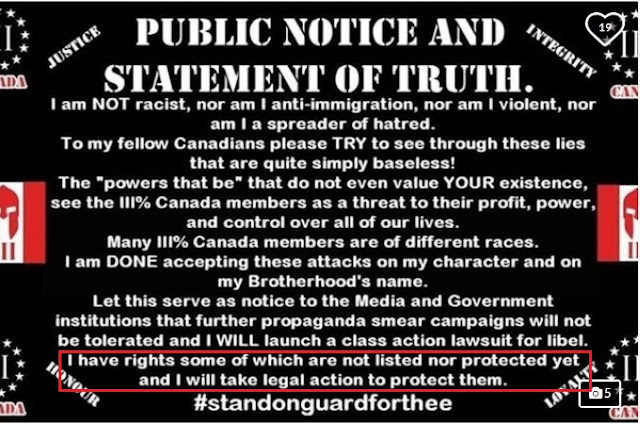 "I have rights some of which are not listed nor protected and yet I will take legal action to protect them."

What does that even mean?

In Edmonton Yellow Vest leader Jeff Sharpe, a man who willingly marched with hate groups referring to immigrants and refugees as "third world sewage and parasites" is also threatening counter-protesters who call him and the hate groups he associates with out: 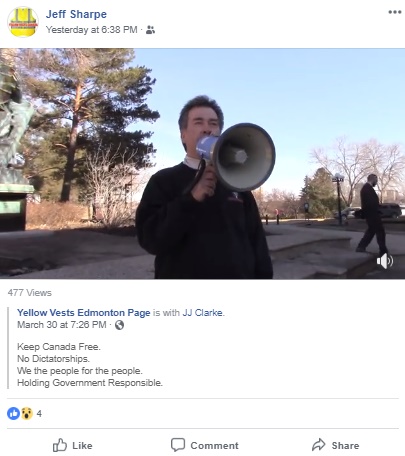 By the way, does Jeff seem a bit more unhinged than usual lately?


Rick is certainly on board: 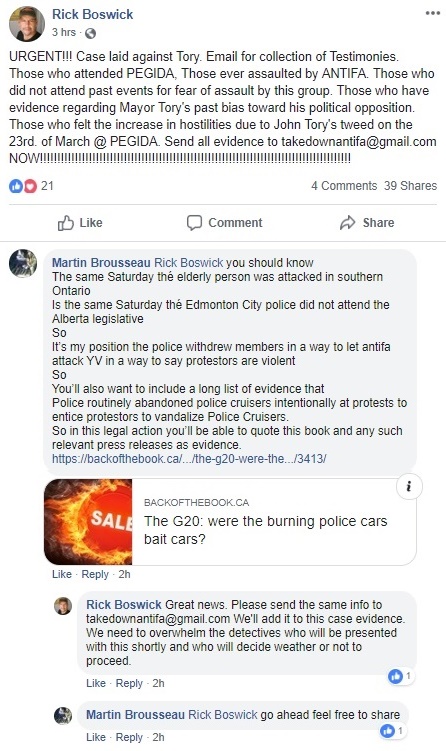 Now please understand that Boswick and Storie aren't only engaged in this quixotic effort on social media. Oh no.

In fact both of them went to Toronto City Hall to arrest Tory:

Imagine if a black Canadian attempted to do this and then ignored security when asked to stop filming. The person would be surrounded, tased, and taken into custody in very short order.

Rick and Derek however were permitted to leave:


Now while the pair have their supporters, there are others who are much more critical of their efforts.

And I'm just going to say this now. If, by comparison, Ron Banerjee is a voice of reason, you might also have to re-evaluate your life decisions (I'm still looking at you too Faith): 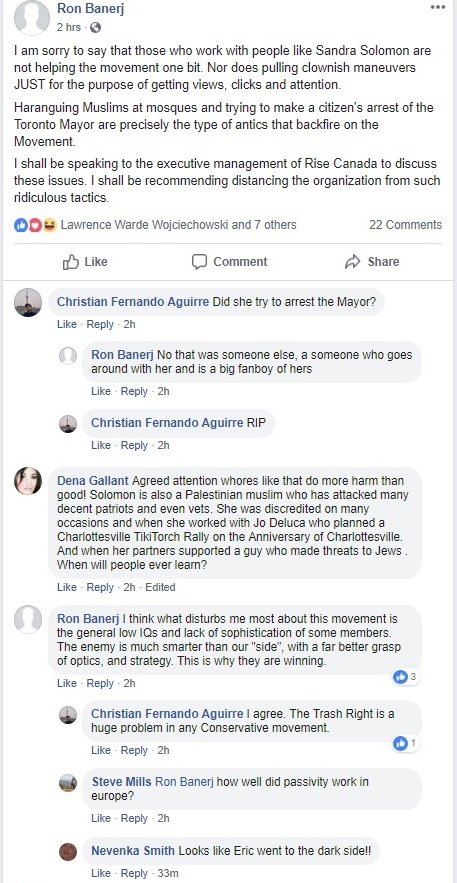 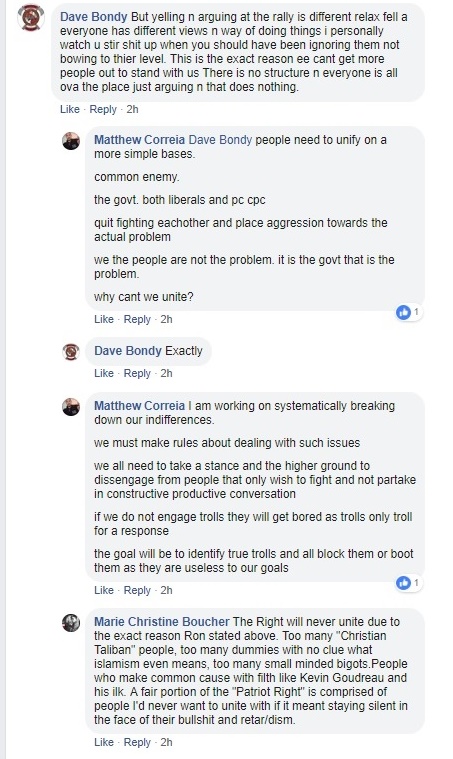 Banerjee sums it all with a shout out to ARC: 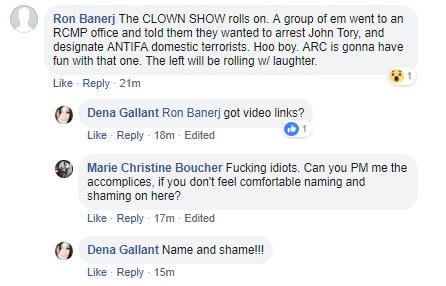 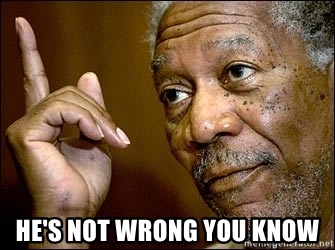 
Shine on you crazy diamonds.