Pat and Jay Rollin' Part: 2 Like the Hunger Games But Not

Pat King and Jay Riedel have been touring the country under their “Rollin With Pat & Jay” banner, hosting “town halls” in various towns in western Canada and, currently, Ontario. YVCE have largely ignored them, save for one tweetstorm of their Drayton Valley, AB town hall where a number of ridiculous claims were made:

I noticed this today, and realized we’ve been neglecting Pat King and Jay Riedel, and their “town halls” across SK and AB (so far.) /1#YellowVestsCanada #cdnpoli pic.twitter.com/BwwtLBW1dd
— Yellow Vests Canada Exposed (@VestsCanada) March 31, 2019 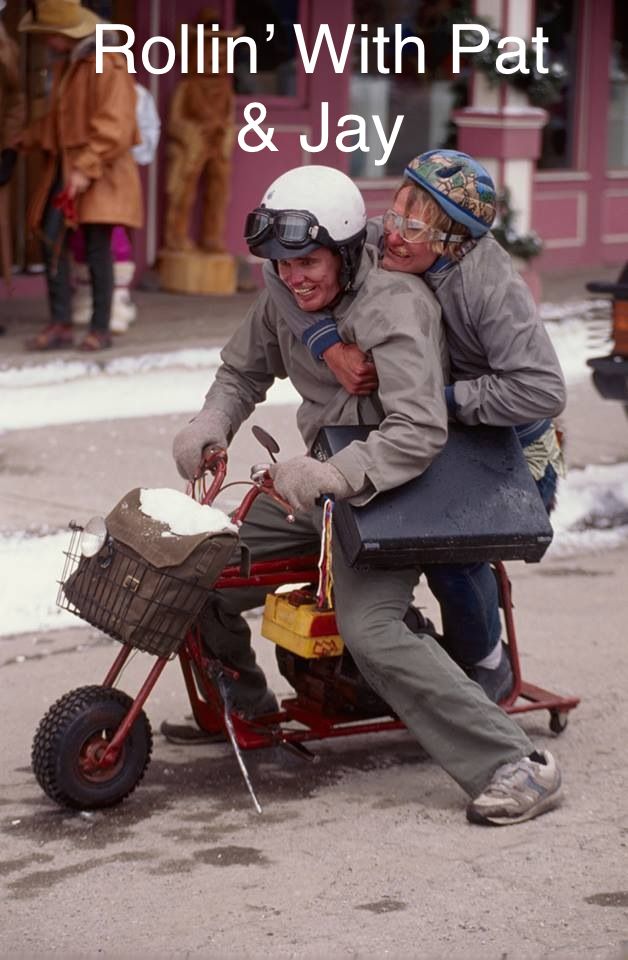 We figured they weren’t entirely worth spending much more time on. That is, until one of our Twitter followers started contacting Ontario legions, requesting they review their bookings. Legions in Arnprior, Finch, and Cornwall were canceled, and the good folks behind this campaign began receiving a barrage of messages on their social media accounts from the kids(oh we’ll get to that). So, in true YVCE fashion, we said “fuck these guys” and got busy.

CBC interviewed King and Riedel Harry and Lloyd about the cancellations, during which Riedel live streamed the entire interaction. We’ve provided a more journalistic debunking of some of the claims made in their live feed(link), however we figured we aren’t done.


Firstly, King claims that the mainstream media has failed to report on what a success the United We Roll Yellow Vest Convoy to Ottawa was. The media did report on it, extremely favourably given the circumstances (such as Northern Guard, Canadian Combat Coalition, and white nationalist symbolism being present) but I would hardly call 200 people on Parliament Hill a “success.” Beaver Tails on the Rideau have longer lineups. We were there; we know. 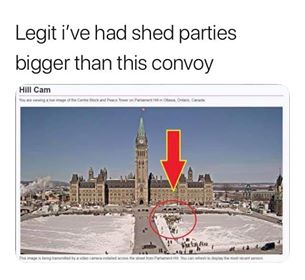 Secondly, Pat uses Christy, his new girlfriend that he met on the convoy who has kids of color, as a defense against being racist. Imagine in 2019 still using people of colour in your life as a defense against racism. Except they’re sharing Islamophobic and anti-Muslim memes on their Facebook, which is a more specific racism towards middle eastern, south Asian and black people. 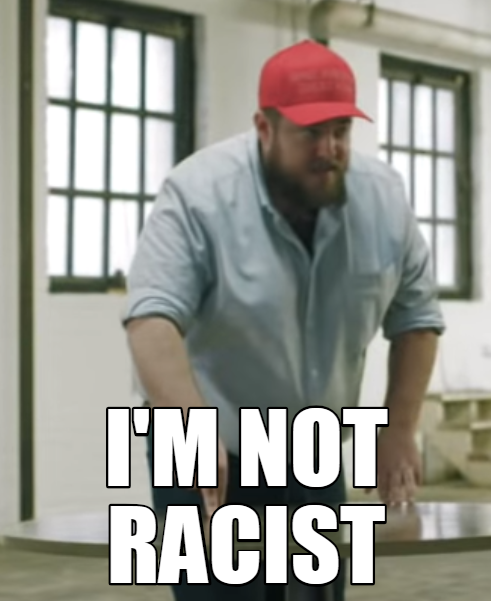 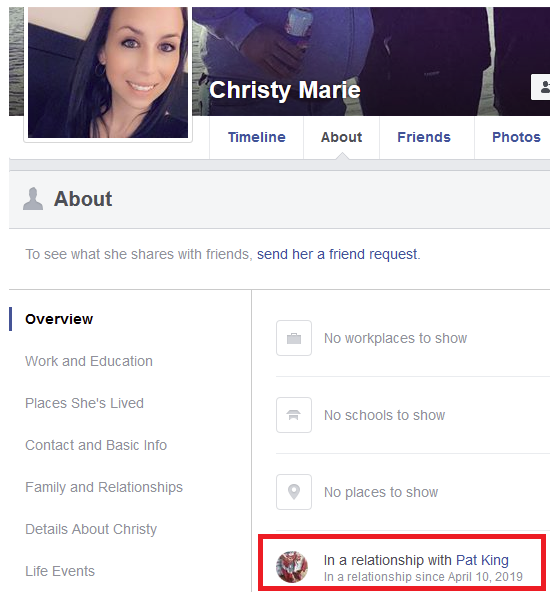 Whether Pat is or isn’t racist is irrelevant for this point, but I find it really disgusting that he’s propping up the children of a woman that he’s only been dating for a short period of time as evidence that he isn’t racist.

In the video Pat and Jay pass a man asking for money. He claims to be a homeless veteran. Pat hugged the man and they gave him some money. Now obviously there is nothing wrong with an interaction like this, however I take issue with the fact that it was live streamed to make Harry and Lloyd look like good guys. This is exploitation, pure and simple and given Pat’s propping up of his girlfriend’s children that seems to be par for the course.

Another thing worth mentioning is the dynamic between Harry and Lloyd and their followers. Many of their followers refer to Pat and Jay as dad, and themselves as kids, which is a little weird, and almost cult-like. 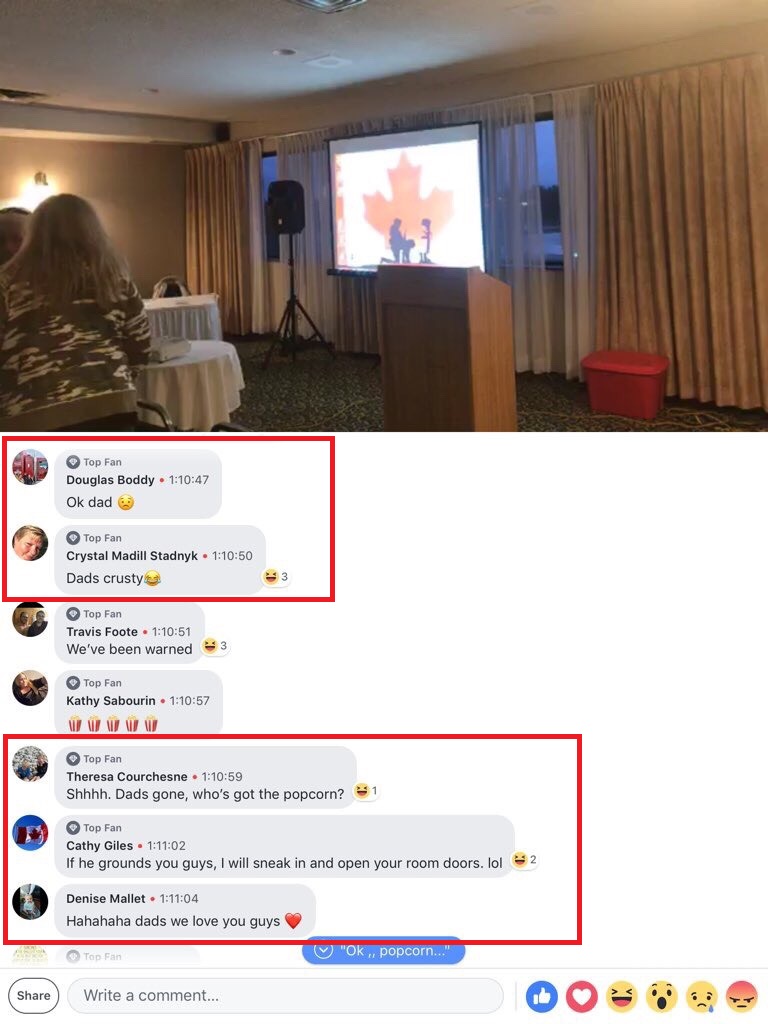 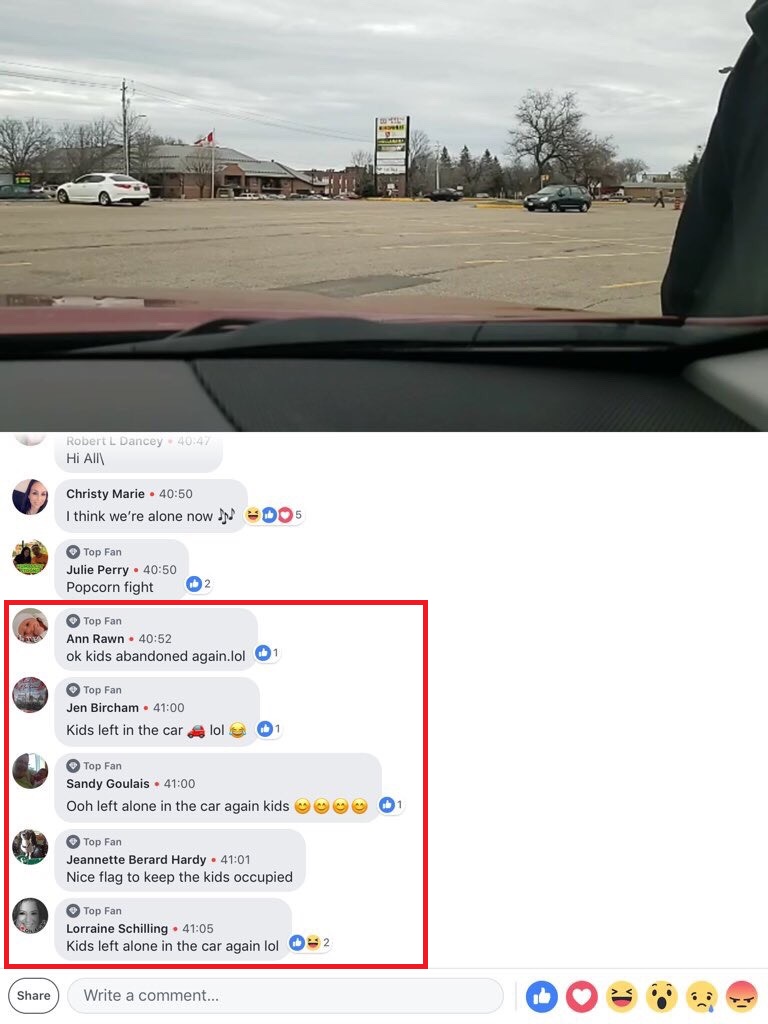 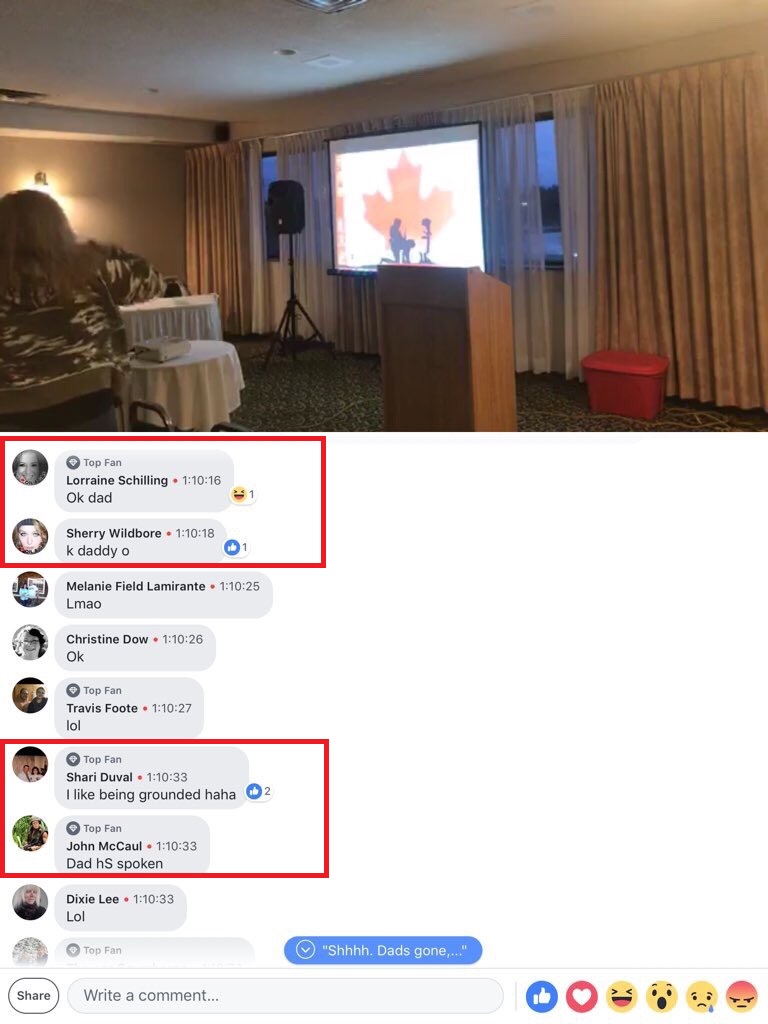 Here are just a few examples but they do this all the time and it’s really creepy.

Harry and LLoyd have claimed that they are trying to create a healthy dialogue and want people to have conversations with them yet are known for blocking people that criticize them. They also want people to show up at their events for discussion, but I have to ask, what difference does that make where the conversation is had if the criticism is valid? Being in a room full of people that are hostile towards dissension is meant to intimidate, but I think the biggest reason for this is that it’s a lot harder to fact check someone in real time.

They attempted to advertise their town hall in a Facebook group called What’s Up Arnprior?, and after receiving a ton of backlash they deleted the post. Sure sounds like they’re interested in a dialog. One of the likely reasons the thread was deleted is that they were caught blatantly lying. It was mentioned that they were a part of the yellow vest movement which they denied. 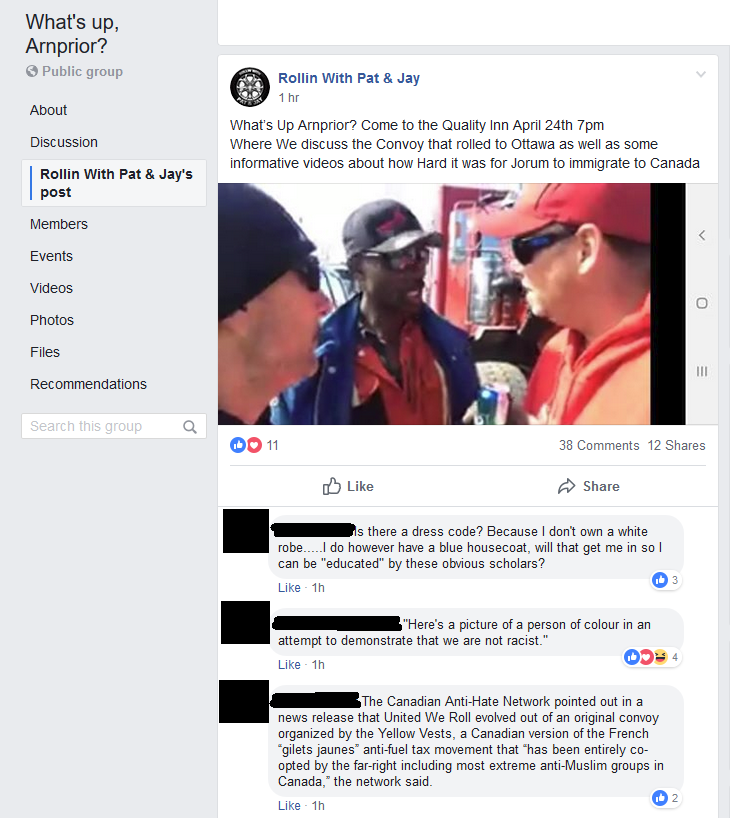 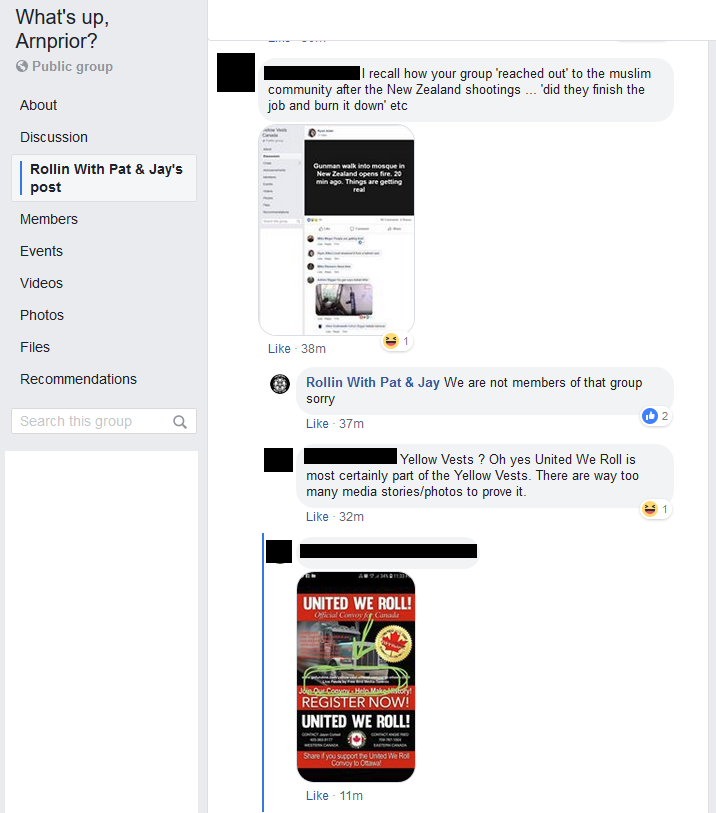 If they’re so proud, why the lie? Also, why would it be a problem if they were in the yellow vest movement, if YVC aren’t racist?

One of the funniest things that Pat says in their town halls, is that the UN will turn Canada into something like the hunger games.
https://www.facebook.com/RollinWithPatandJay/videos/2354296651516854/
Around 2:34:00

Harry and Lloyd insist that they’re touring the country to spread the truth and they do their research yet when we research them it’s blatantly obvious that they don’t understand what the truth is. I truly believe Pat King is one of the biggest bullshitters in the yellow vests movement, which is a really high bar, but I stand by that assessment.

If you want a take down of their town halls (specifically Arnprior) that's is better than anything we could write, check out this opinion column from Inside Ottawa Valley. https://tinyurl.com/yyq7c6m7
Posted by Yellow Vests Canada Exposed at 17:54