While trying to piece together media reports and accounts from ARC supporters of the Your Ward News sentencing hearing this morning, one word keeps coming to mind: circus.

Your Ward News' Editor in Chief, James Sears, and Publisher, LeRoy St. Germaine, were found guilty in January of willfully promoting hatred against Jews and women under S319(2) of the criminal code. In the lead-up to today's hearing, Sears likened himself to Christ and seemed to relish the idea of being led away in cuffs on Greek Orthodox Good Friday. He also claimed he would (checks notes) bring his "posse of black folks" with him, and would attempt to "reason with the Judge."

Spoiler: no "posse" was in attendance, and certainly no successful "reasoning" occurred.

Crown Attorney Erica Whitford presented thorough submissions relying on extensive research of existing case law that referenced many, if not all, hate crimes cases that have resulted in a custodial sentence in Canada. She called for the maximum sentence of 6 months per count, for a total of 1 year, to be served consecutively. In addition, she asked for 3 years probation, with strict conditions that would prohibit Sears from publishing within that period. The sentence, she argued, must serve both as a denunciation of the hate speech that occurred, as well as a deterrent for future incidents of said hate speech. CP24 reported that she also referenced multiple victim and community impact statements that read, in part:

"By delivering Your Ward News to our door, they were saying there was nowhere to feel safe."

"Hate speech strikes at the heart of Canadian values. The glorification of violence against women made them feel vulnerable, retraumatized some, and tended to hurt the cause of equality overall."


Sears' attorney, Dean Embry, conceded that Your Ward News did devolve into hate speech, and called it "repugnant," however, he argued that the publication was not "created with the sole purpose of spreading genocidal thought," and, amazingly, insisted that the Crown had failed to prove that YWN had, in fact, caused any actual harm. According to reports, he insisted that the total sentence should be no more than 2-4 months called for a four-month conditional sentence and added that the Judge cannot sentence based on "theoretical harm." He also claimed that barring Sears from publishing anything for 3 years was too broad.

The proceedings started to go off the rails when Sears was given the opportunity to speak. He had prepared a 62-page "allocution," that he claimed would take at least an hour to deliver. Judge Blouin instructed him, repeatedly, to stick to issues pertaining only to sentencing, however, he still apparently managed to take up 20 minutes of the court's time. Here's a sampling of what he said: 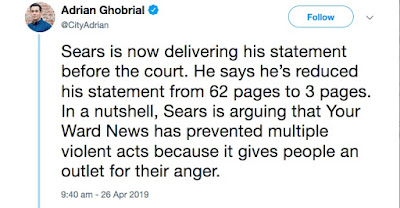 CTV quotes Sears as saying, "I'm approached on a regular basis by angry men, and sometimes women, that Your Ward News gave them a voice when no one else would. Several men have told me that, because of our publication, they did not commit violence."

He also apparently brought a blind man to court who he presented before the Judge as an example of someone who was "saved" from committing an act of violence against the doctor who blinded him. YWN, he claimed, gave this man a "release valve" for his rage and he now spends his time handing out copies of the publication on street corners.

Perhaps most interestingly, Sears thanked a woman named "Grace," who is supposedly one of his publication's strongest financial backers. He said she flew in from Japan to be present at the sentencing.

UPDATE 1: We have confirmed that "Grace" from Japan is, in fact, Holocaust denier Grace Eki-Oyama, who, at one point, vacationed with Paul Fromm in Cuba.

After calling the Crown racist, he, according to CTV, tried to reason with the Judge, stating that "We're just trying to open a discussion. His Honour cannot take one side of a religious debate or one side of a political debate."

He then goes on to contradict himself and engage in his trademarked grandstanding: 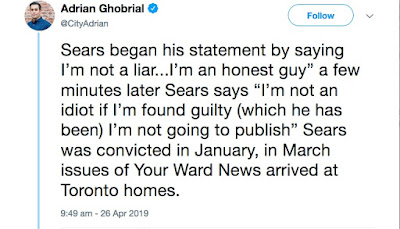 Despite not having his promised "posse" with him, media have reported that about 15 supporters of the publication were in attendance. So far, ARC has identified the usual suspects, including Paul Fromm, Bahman Yazdanfar, Lawrence McCurry, Arthur Smitherman, and the woman we previously identified as a long-time court attender, dating back to the Zundel trials. We are working to identify some others, and expect to have an updated list soon.

Judge Blouin is taking a month to review the sentencing submissions, including the victim impact statements, which apparently were only delivered to him last night. Sears is expected to be sentenced on May 31st.

St. Germaine has a longer reprieve as the court needs to wait for the submission of his pre-sentencing report. (We assume the press is referring to the Gladue Report). St. Germaine's sentencing is scheduled for July 15th.

Your Ward News contributor, Lawrence McCurry, uploaded a video of yesterday's media scrum with James Sears and his friend Jonathan, who is the blind man Sears claims his paper "saved" from committing an act of violence. For the sake of transparency, I'll make clear that I edited out the beginning where McCurry tries to get Warren Kinsella and Bernie Farber to comment. He claims they were not present to see justice done, but to "represent the globalist position and ideology to the controlled corporate media who have not been honest in the way they have reported on this story from the very start." He then goes on to show a media clip used by a mainstream news outlet to illustrate how the press manipulates things. The bulk of his video, however, is unedited footage of Sears' media scrum, which is what I've included here. Sears sticks to his talking points from his "allocution" about YWN being a release valve, that he is a law-abiding citizen who was trying to open a discussion, and then digs in to his plans for a constitutional challenge over his conviction and pending sentence. Paul Fromm chimes in and compares Sears to James Joyce! I'll let the rest speak for itself, however, I will add a WARNING that there is some graphic language regarding rape: