ARC would like you to meet Darik Horn. Here he is getting settled in at a Canadian Anti-Hate Network event in Newmarket, Ontario this week: 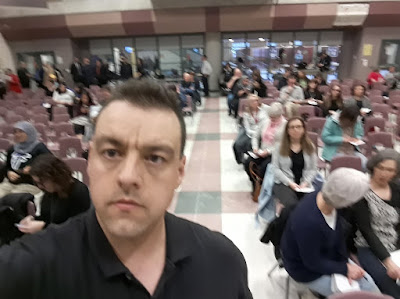 Darik has a lot going for him compared to many of his colleagues. For one thing, he's book smart. Or should I say, computer smart. According to his LinkedIn profile, he has a Bachelor of Mathematics degree in Computer Science from the University of Waterloo with a Minor in Information Systems, Business, Economics and Human Resources from Wilfrid Laurier University. His recent work history is a bit patchy, but he spent 4 years at Navtech, now NAVBLUE, a company that specializes in aviation operations software. He's also been with BrightBlock, and appears to be the brains behind DBAN (Darik's Boot and Nuke), a very well respected open-source project that securely wipes hard drives. 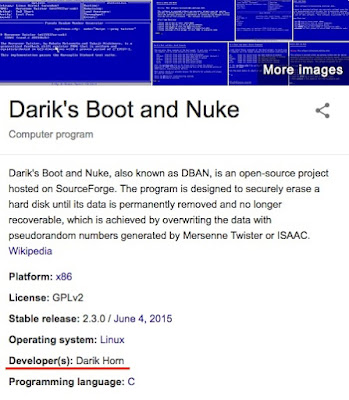 Darik tries to be a helpful guy both online and off, and he looks out for his friends, like Paul Fromm: 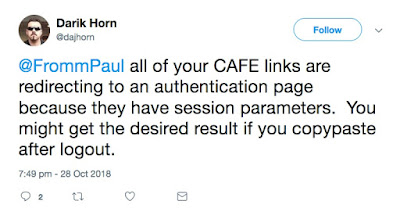 Despite giving this advice in October 2018,  Fromm has yet to fix the problem. It's quite possible he doesn't understand it as you can't teach an old dog new tricks and all that.

Last year, Darik was quite taken with Faith Goldy, who was just banned from Facebook and Instagram. During her mayoral election campaign, he followed her around and was very concerned that she was barred from debates: 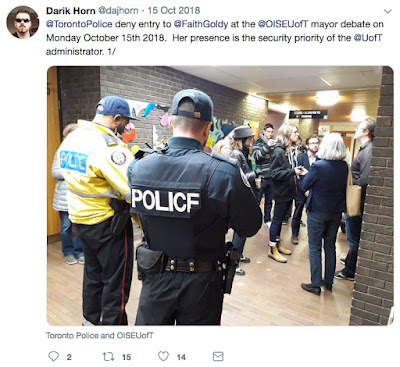 He also canvassed with her, and is pictured here with other campaign volunteers outside Queen's Park: 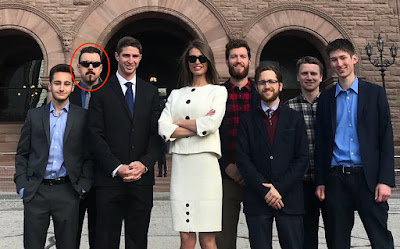 Needless to say, he felt she'd make a top-notch mayor who would do away with pesky bike lanes, stop making pro-lifers feel like second class citizens, and other such lovely things: 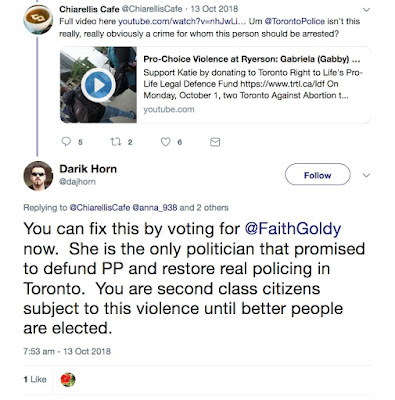 Since the end of Goldy's mayoral campaign, he's jumped on Team Bernier with a vengeance. He spent significant time volunteering for Robert Geurts, the PPC candidate in the recent York-Simcoe by-election. Again, he focused on being, above all else, helpful, and insanely law-abiding. He volunteered to carpool PPC supporters to a rally, and was very concerned about someone removing campaign signs. He followed them, but refused to jaywalk: 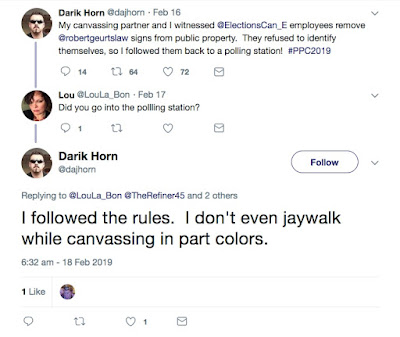 Most recently, he was concerned about the MAGA hat dude at the PEGIDA rally in Toronto in late March, which he evidently attended. You can read a bit about the rally here, and PEGIDA's recent legal troubles here. 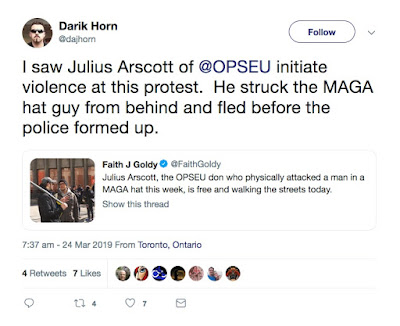 With such a helpful attitude, and concern for others, I suppose it's not a complete surprise that he would want to help children as well. His LinkedIn profile shows he's been a Colony Leader with Scouts Canada, Shining Waters Council, South Lake Simcoe, for over three-and-a-half years: 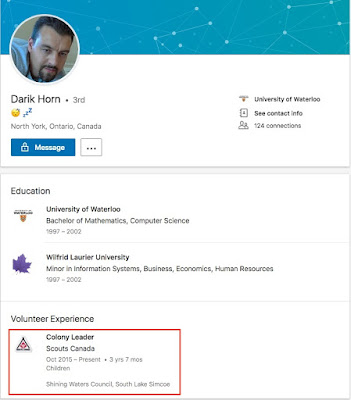 This past Christmas, he marched in the Newmarket Santa Claus Parade with his Scout group: 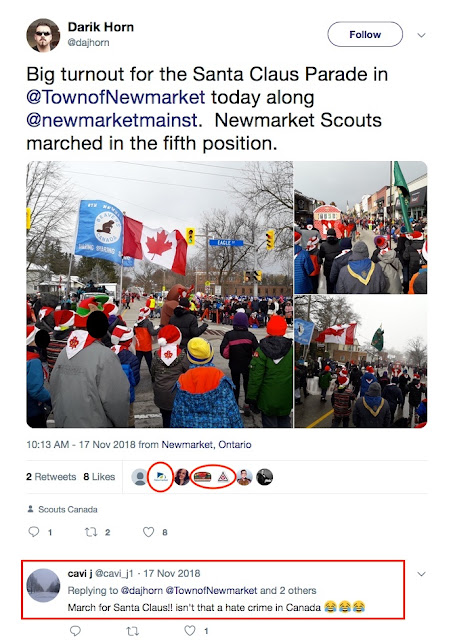 Note that this Tweet was liked by Scouts Canada, Battlefields Council, which is a Scouts collective for Hamilton and other towns in Niagara Region, and the City of Newmarket.

Just last week, it appears he took a Cubs group to a woodworking workshop: 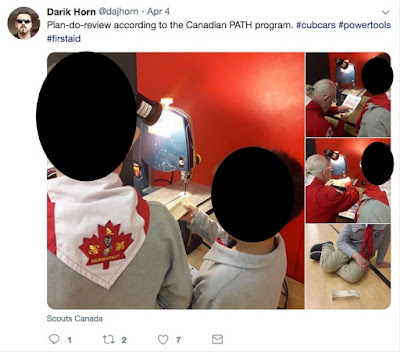 Oh yeah, and because he's so helpful, he also organized an event at the Aurora Gun Club on November 7th, 2018, for the older boys, and volunteered to do more of the same: 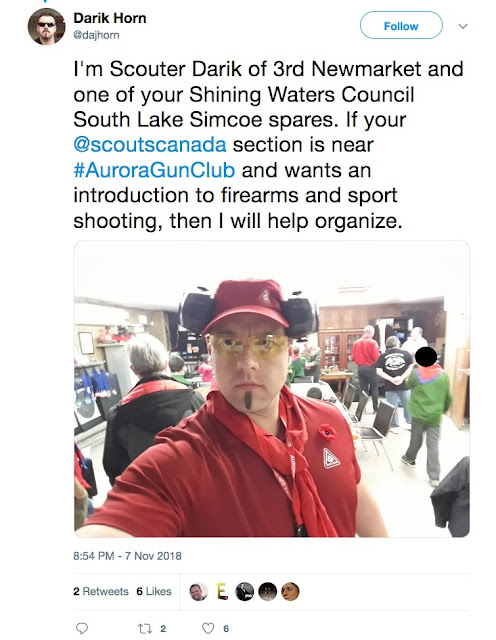 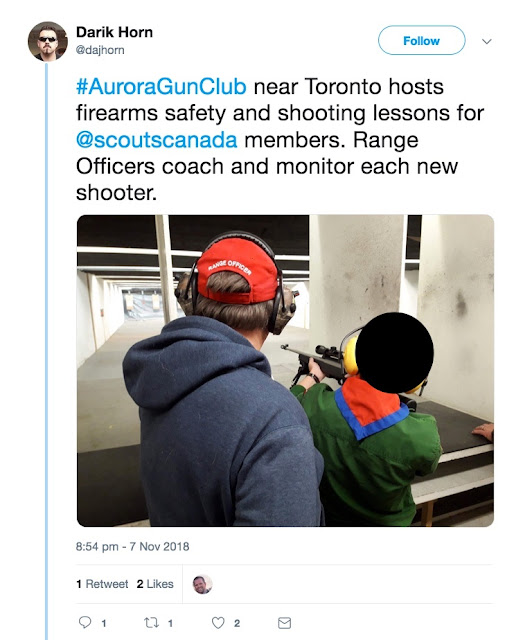 Interestingly, Scouts Canada didn't "like" that, or any of these other Tweets.

Apparently "natural focus" only comes from learning to use a deadly weapon: 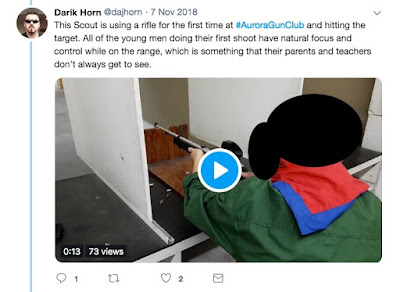 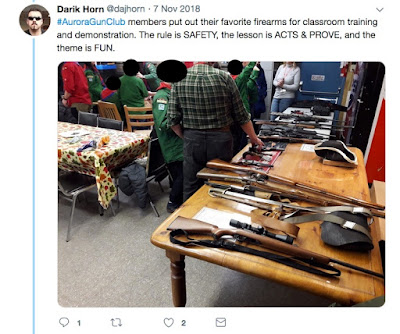 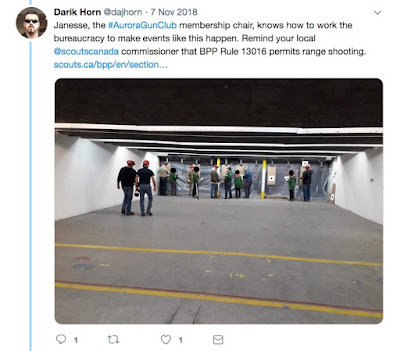 The link in the above Tweet didn't work, but with some digging, I found Scouts Canada BPP Rule 13016: 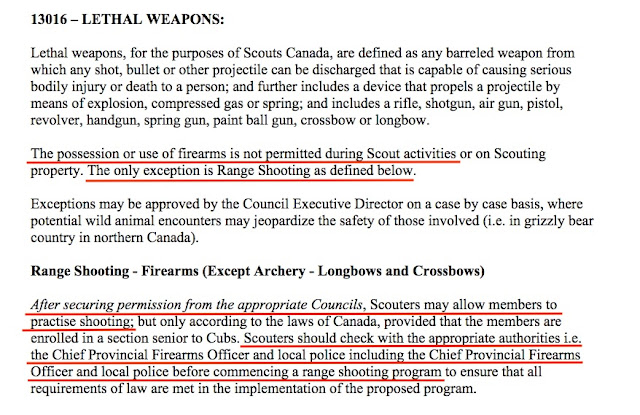 It is unclear whether Darik himself, or "Janesse," the Aurora Gun Club membership chair, spoke to the "appropriate [Scout] Councils, the Chief Provincial Firearms Officer, and local police to approve an application for one of Faith Goldy's canvassers to take a bunch of children to a gun range.

Speaking of rules, since Darik likes them so much, it is rather amazing that he is a Colony Leader in the first place given their in-depth vetting process, which includes an interview, reference check, two police background checks, training, and an annual signed Code of Conduct: 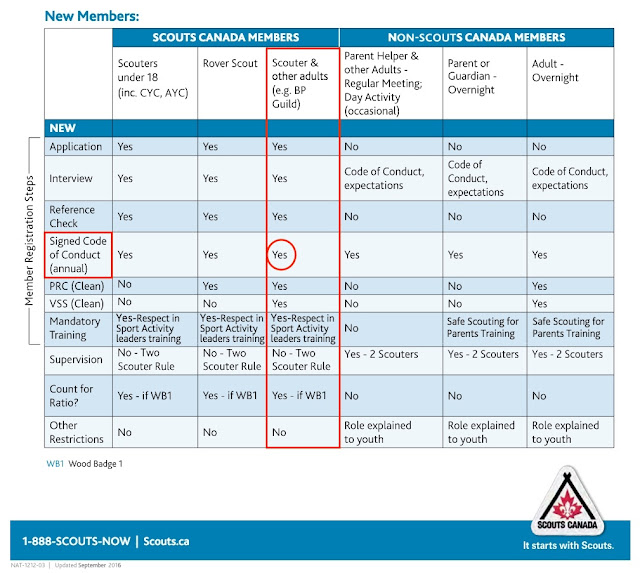 The signed Code of Conduct is a very detailed document outlining how adults are supposed to behave and there are careful limits placed on adult-child interactions. While I want to make clear that ARC has no evidence at this time that Darik has behaved inappropriately in one-on-one interactions with Scouts, I believe that associating with and supporting notorious white supremacists should fall under the section where adult Scouts must inform Scouts Canada of "any concern related to youth safety that may impact [their] ability to participate in Scouts activities." Particularly, I'm concerned about a white supremacist's ability to "treat everyone with fairness, respect and dignity," "challenge behaviour or attitudes that are inconsistent with Scouting values," or "use positive discipline, promoting good behaviour by guiding youth towards positive solutions." I am also concerned he could behave in ways that could be misinterpreted, as outlined in the Code, or "ignore or trivialize abuse, harassment, bullying, hazing or bad behaviour." 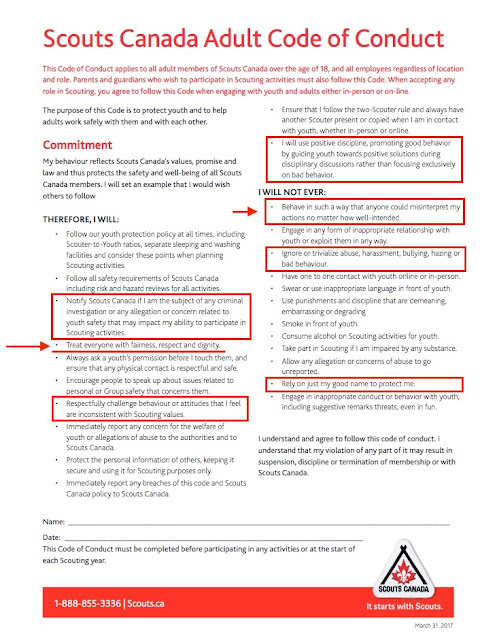 Beyond the Code, I would feel, and I imagine many parents of Scouts would feel, more than a small amount of discomfort about my child being guided and shaped by a man who thinks Faith Goldy is the best choice for mayor. And regardless of how I may or may not feel about range shooting, I absolutely would NOT want my child to learn these skills either directly, or through and event organized by, a man who thinks nothing of helping Paul Fromm, who recently stated he agrees with 95% of the Christchurch shooter's manifesto.

Given that Darik Horn has somewhat attempted to fly under the radar, I'm willing to believe that Scouts Canada was unaware of his beliefs or affiliations. However, now that this information is being brought to light, it is up to them to make an important choice. Will they tell Scouts that white supremacists are welcome, as long as they're helpful and behave themselves, or does treating "everyone with fairness, respect, and dignity," include creating a safe environment for all children free of any potential white supremacist influences?

Scouts Canada declined to comment, however, we received the following email from the Aurora Gun Club:


We were made aware of your article today, and appreciate the opportunity to correct the record.

Mr. Horn did not organize this event, and was not part of the process in any way. He, along with other adults attended as observers. The event was organized by the Scout Leaders for this group, and was approved after going through a rigorous approval process, as per their policy, with Scouts Canada. Scouts learning firearm safety has been a practice observed for generations.

As a licensed range, we work closely with the Chief Firearms Officer and other governmental officials to ensure we meet or exceed all requirements for visitors.

As a club, we believe unequivocally in the equal rights of all people. It is our policy and our practice to never use race, religion, place of origin, sexual orientation, gender, or any other such factor in approving new members. The diverse tapestry of our members reflects that view.

We can not comment the views of any individual,  and have no knowledge of Mr. Horn’s views or beliefs.

Excellent work as always. Darik was also one of the people kicked out of the Toronto mayoral anti-poverty debate audience, which descended into chaos when he and other Goldy drones started shouting "Let Faith Debate" and attempted to perform a citizens arrest of a man they claimed had manhandled a woman (the police didn't agree). He also creeps on various Twitter accounts critical of Goldy and other bigots. Given his technical knowledge, it would be interesting to know if he has been involved in backroom work for Goldy or the PPC.