Everyone else is talking about Talya Davidson, so I figured we should, too

On August 12th, 28-year-old Toronto resident, Talya Davidson, was videotaped hurling racist insults and spitting on a man in Nathan Phillips Square while holding a sign supporting CPC leader, Andrew Scheer. She was subsequently arrested and charged with one count of assault and 3 counts of assaulting a police officer.

The video, taken by her victim, Farhan Rana, quickly went viral and many people condemned the behaviour, including Scheer himself. 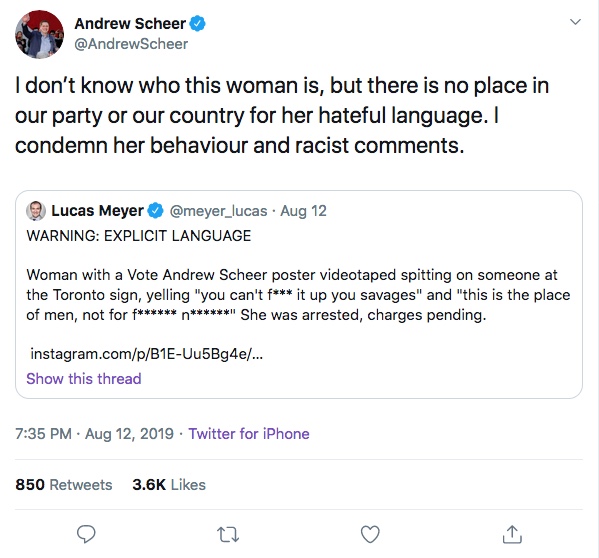 However, people quickly realized something wasn't right. When they dug into her history, it became clear she did not have the type of social media footprint one would expect of an overt racist. Davidson, who is originally from South Africa, seems to have an affinity for Latin American cultures. She claims to have studied at both the University of Guelph and UBC, worked as a journalist in Guadalajara, and has an interesting blog of stories based on her life and travels. She recently participated in a literary event hosted by Carolyn Bennet, and has a YouTube channel of her efforts to learn the guitar. 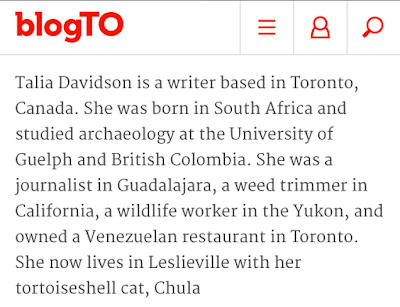 As eagerly reported by The Post Millennial, (more on them later), Davidson declares her political interests as being substantially left of centre on her couchsurfing profile. 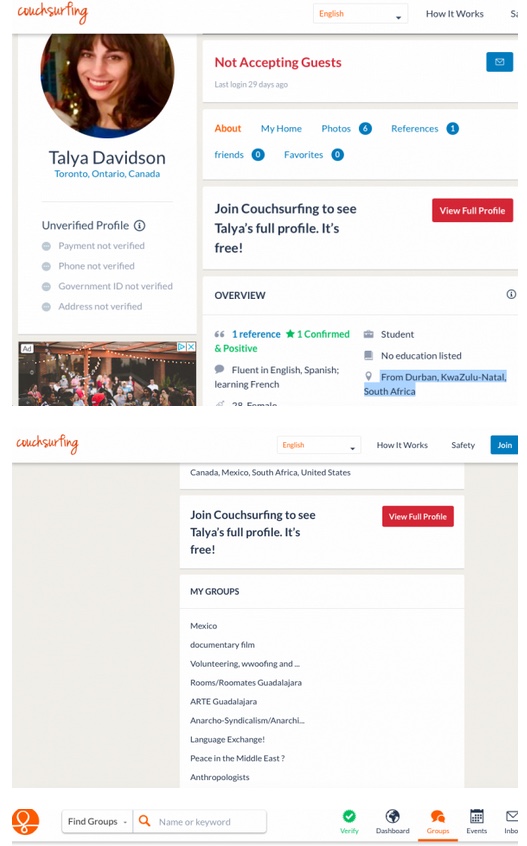 Judging by Davidson's accomplishments, she is smart and driven. At the age of 25, she opened a Venezuelan restaurant called El Arepazo with her then boyfriend, Luis Vega, in Kensington Market. It did quite well for a while and even won a Now Magazine award in 2017. 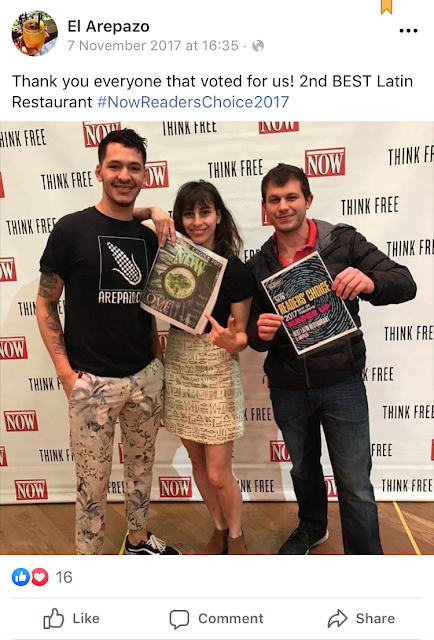 Vega, however, was a bit of a hothead and got into the news for his own viral video of assaulting a graffiti artist outside his restaurant in 2015. Apparently he was attempting to make a citizen's arrest.


In addition to assault, he also decided to badmouth his suppliers online, and at one point used Talya's Now Magazine account to do so. This comment garnered a response claiming that Vega is homophobic and that anyone who is LGBTQ, or considers themselves an ally, should boycott El Arepazo. Davidson did not appreciate all of this and asked Now to remove Vega's comment. 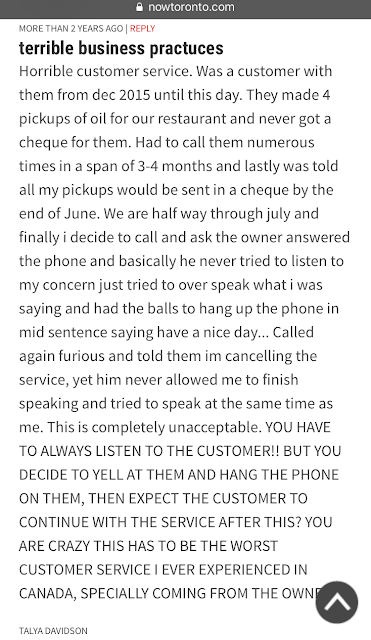 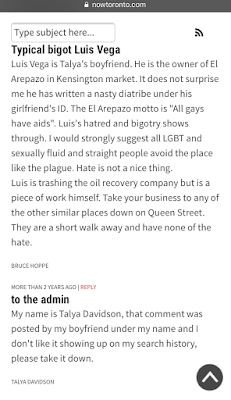 The most controversial post I found of hers was another Now comment where she compares the hijab to a bra. My first take on it was admittedly not favourable, but upon reflection I can see that while it is awkward, it wasn't intended to cause harm.

So, how does a bright, driven, left-leaning person who is concerned with her social media footprint end up hurling racist insults and writing stuff like this on Facebook? 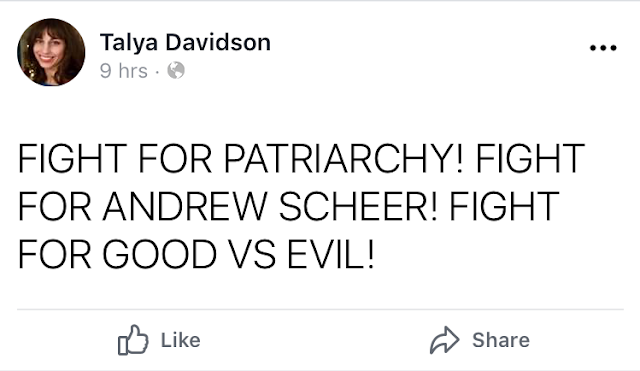 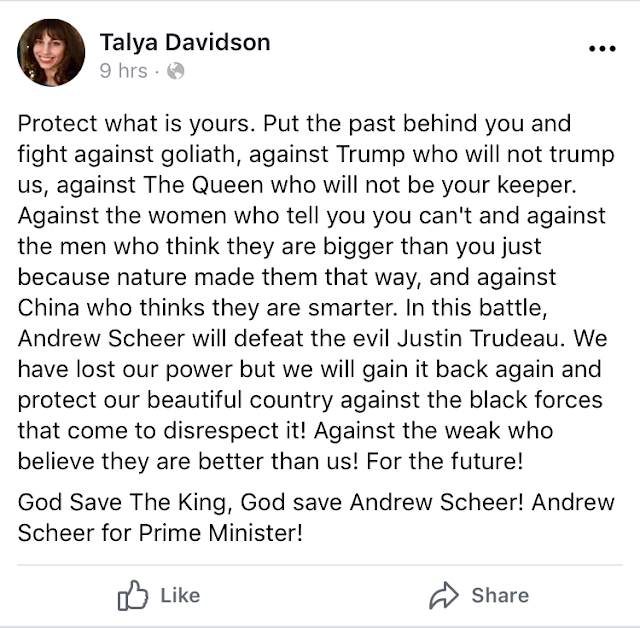 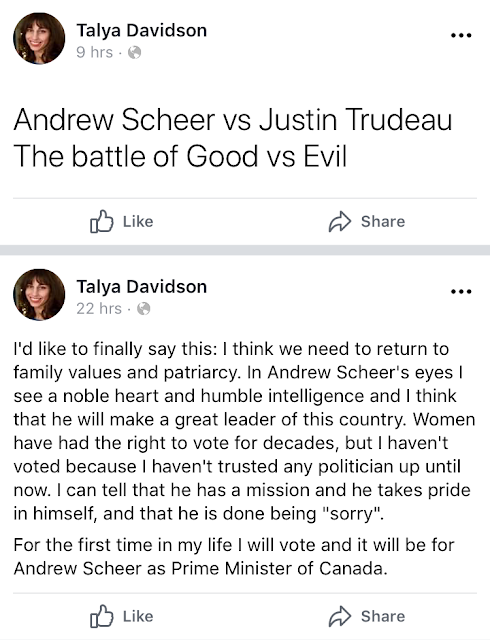 As expected by many, Davidson was ordered by the court to have a psychiatric evaluation at CAMH, and for the moment, that is the extent of the answers the public has about the case.

Certain media outlets -- mainstream and otherwise -- and racist extremists jumped on this story between the video going viral and Davidson's transfer to CAMH. What follows are but a few screenshots of an avalanche of stomach-churning Tweets from people who were determined to mould the story to their liking.

First up is Paul Fromm. Before much was known about Davidson beyond the viral video, Fromm claimed that, despite all evidence to the contrary, there was no hate, no crime, and most certainly no hate crime here. It was just "bad manners," and, of course, it is really our diverse society that's at fault. 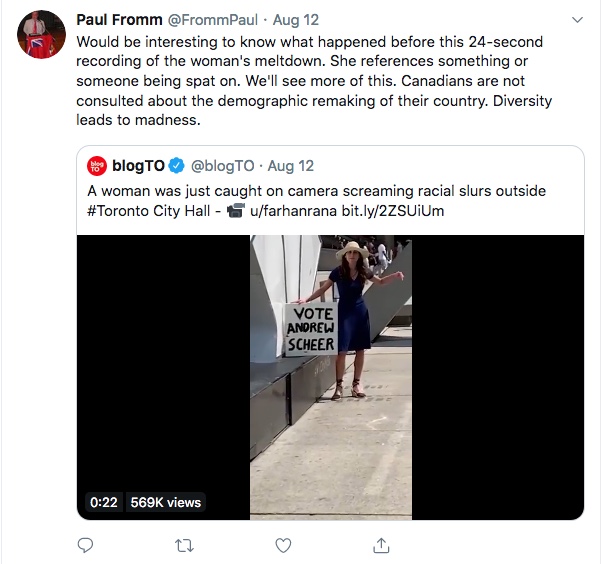 But once people started digging in, things got really out of hand, starting with supposedly mainstream publications, like The National Post, that ran a headline quoting Michelle Rempel saying the attack was staged. 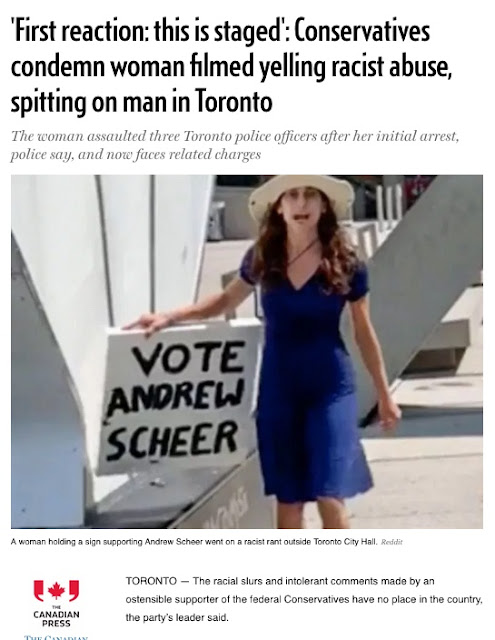 The article does condemn Davidson's actions, but the headline fans the conspiracy theory flames that this was a hoax. Others went much farther, including The Post Millennial who blamed the mainstream press for falling for an elaborate trick. 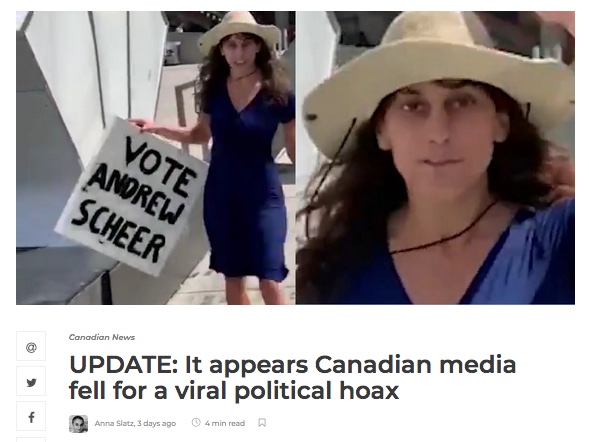 Ezra Levant jumped on the hoax bandwagon too, because of course he did. This is apparently what passes for "telling the other side of the story." 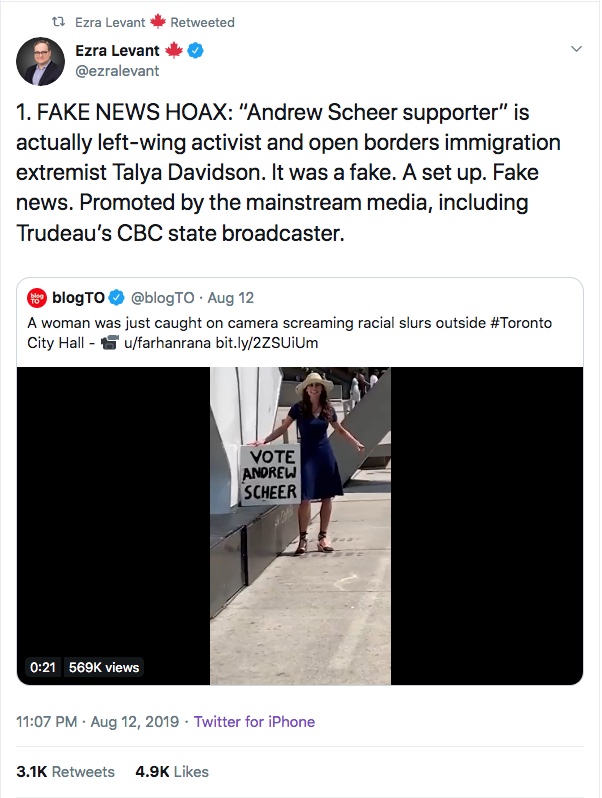 And then there is Faith Goldy's fan club, I.D. Canada. Apparently, we need to "wake up." 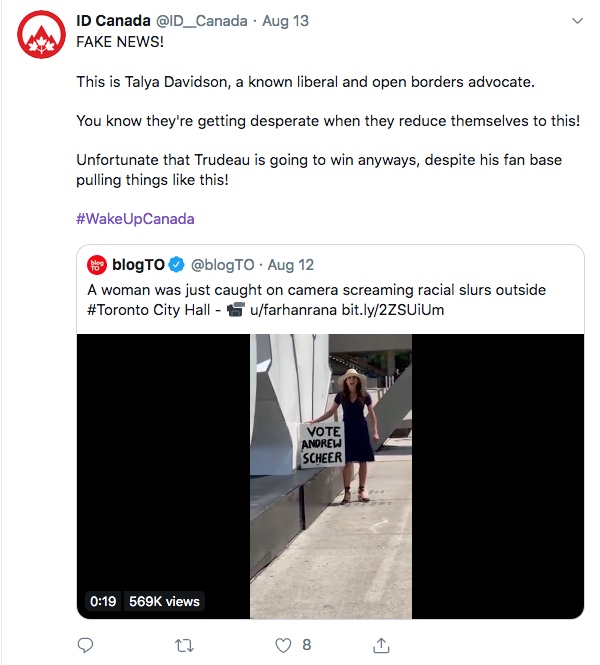 The articles, Tweets and posts promoting the hoax narrative were unrelenting. They were nauseating to read because they added another layer of insult to Rana's experience by claiming he was either to blame, or in on the conspiracy with Davidson. 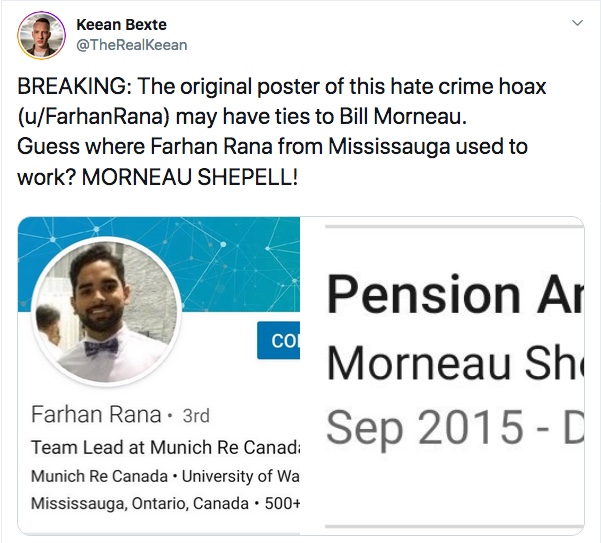 The racist attack Rana experienced was very real, and I cannot imagine how seeing Tweets like Bexte's made him feel. Davidson will be back in court on September 12th. Here's hoping the discussion around this case will become more productive and compassionate soon.