When it comes to right-wing media in Canada "The Post Millennial" has become an increasingly important source cited by conservative politicians, conservative pundits, your angry uncle insisting taxation is theft during Thanksgiving dinner, the lady who shows up to Parliament Hill at 1:00 am to scream at tourists about chem trails, and the numerous online sites this blog monitors. Although touting itself as a news source, the reality seems to be that it is by and large a propaganda network that helps to promote conspiracy theories and right wing talking points.

On August 22 Emma McIntosh of "The National Observer" (click here to support them financially) published a story that profiles the editor of "The Post Millennial" Cosmin Dzsurdzsa who readers might know best as Lindsay Shepherd's boo:

THREAD: My latest file is a look at how a guy who worked for a blog that promoted racists became an editor at a national news outlet called The Post Millennial. Let's dive in. https://t.co/VeTWjAKEy3 #cdnpoli #elxn2019
— Emma McIntosh (@EmmaMci) August 22, 2019

In the article McIntosh traced Dzsurdzsa's career working for a pro-Putin "Russian Insider" and before then as a creative director and correspondent with "Free Bird Media" which some people may have first heard about regarding a controversy involving an Ontario Progressive Conservative candidate:

“Before Dzsurdzsa was hired at the Post Millennial, he also worked for websites that promoted racism and peddled pro-Kremlin content ...

Dzsurdzsa’s work with both Russia Insider and Free Bird Media was detailed in a PressProgress article in May 2018.” 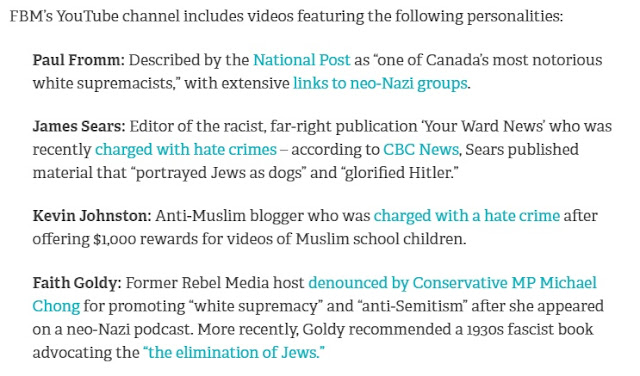 ARC has discussed FBM a number of times, though my personal favourite article was the pissing match between Ronny Cameron and FBM's Alex Van Hamme:
Anti-Racist Canada, putting the "c" in classy headlines since 2007.

I would be remiss if I didn't mention that Dzsurdzsa deigned to turn his eye toward this lil' blog on the Interweb on at least one occasion:

But at the same time Emma McIntosh was looking into Cosmin Dzsurdzsa, ARC happened to be looking at another figure within "The Post Millennial" universe: 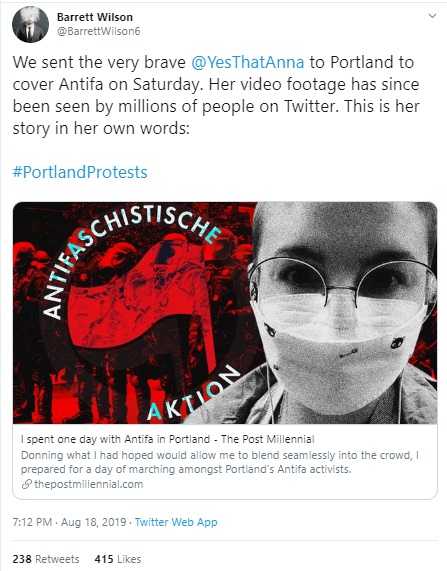 Anna Slatz has been writing for "The Post Millennial" for 7 months. Though she suggests her politics run to the left, her articles seemed focused on critiquing progressive activists, politicians, and academics as well her more recent preoccupation with the very troubled (and perhaps mentally ill) Jessica Yaniv. Slatz was also the writer who promoted the conspiracy theory that the Talya Davidson story, which ARC commented on last week, was a Liberal plot to damage the Conservative Party prior to the election:

More recently Slatz was in Portland, Oregon ostensibly to report on the Patriot Prayer protest and massive counter-protest pushing the narrative that "antifa" were a violent and uncontrollable mob, a narrative that Andy Ngo certainly approved of: 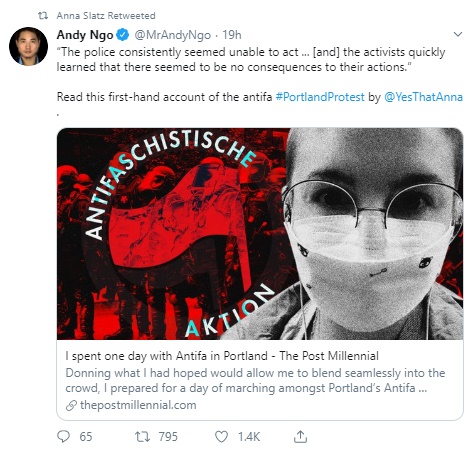 That being said we've know Ngo to play fast and loose with the truth so.... maybe take his praise with a grain of salt?

Stop me if I'm being paranoid, but I'm starting to get the feeling that this Andy Ngo fellow might be telling a few porky pies pic.twitter.com/XnCMzmFybR
— Free Chelsea Manning (@CranBoonitz) August 19, 2019

Also, I saw that scuffle go down right in front of me (Andy Ngo wasn’t there), and the cameras started rolling after Based Spartan walked through the throng taking swings at people. They chased him out. Martyring this guy isn’t gonna do you any favors.
— Andy Campbell (@AndyBCampbell) August 19, 2019

It is prior to Slatz's involvement with "The Post Millennial" that is of interest to this writer however: 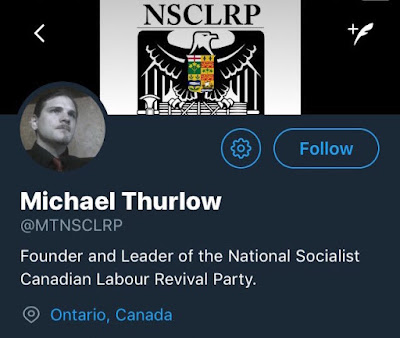 Michael Thurlow is a spectacularly marginal figure even for the far right in Canada. ARC has only written about him once and that was in relation to.... wait for it.... a pissing match with Kevin "No Show" Goudreau (see a pattern here folks?).  However there was a moment in early 2018 when Thurlow's National Socialist Labour Revival Party made the mainstream news: 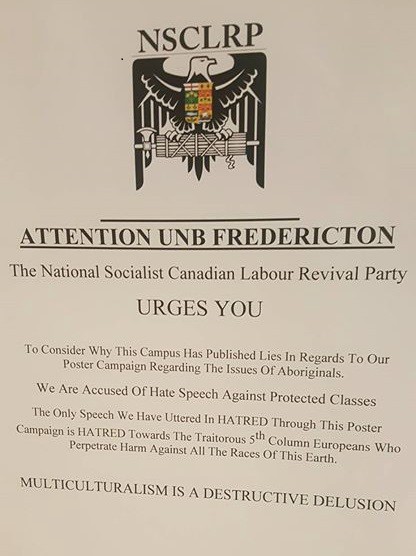 Don't worry though. Thurlow isn't a Nazi according to Jonathan Kay:

Except that he is TOTALLY a Nazi: 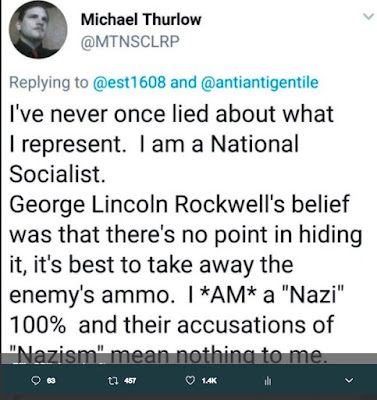 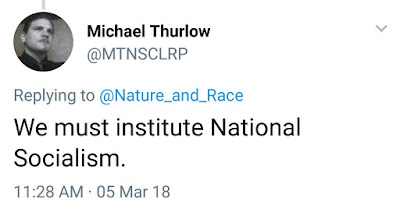 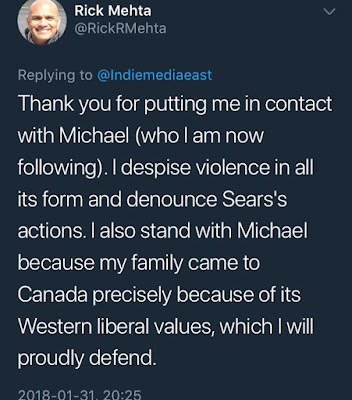 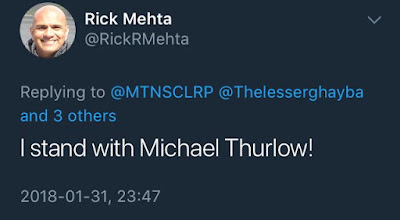 It is at this point that Anna Slatz, who once went by the name Anna de Luca, comes in. At the time Thurlow's flyers were being posted around the UNB campus, Slatz was the editor-in-chief of the student newspaper, "The Baron" which is a position she appears to have held for less than a month by that point. In that position, Slatz published an op-ed by Thurlow as well as an uncritical interview where none of his racist statements were challenged.
Slatz defended her decision to provide a Nazi (and yes Jonathan, Thurlow is a Nazi) with a forum to disseminate his message that among other things, Jews preyed on non-Jewish girls for example, on her belief in "unfettered freedom of speech and expression." 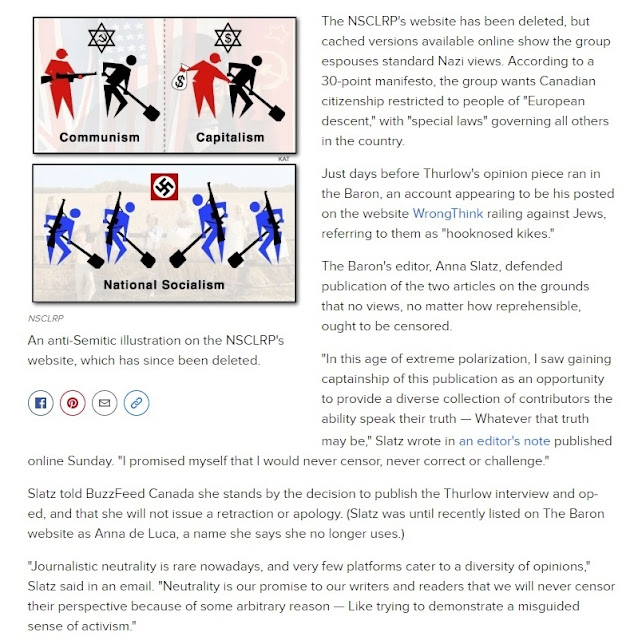 She double-downed when challenged in an email from CANADALAND:


“So you are saying editorial roles have to remain static across every single publication?” De Luca writes in an email to CANADALAND, when asked if she knew that editorial judgement was part of her job description. “Ah, no wonder I’m in so much trouble with you folks! Because somewhere I missed in my job description where it told me to be biased and only publish content certain people agreed with.”

De Luca also tells CANADALAND that she is “not groovy” being told what her job should include.

“I see my role as constituting a single thing: publishing. I will help writers develop their thoughts, and offer some minor criticism when asked to do so,” De Luca says. “I want to see articles go up, people debate and engage with them, and that process of deliberation lead to new articles that then repeat the cycle. IE: Dialogue!”

Suffice it to say Ms. Slatz had (perhaps has) no idea what journalism actually is:

People may be entitled to their opinions, but those opinions are not entitled to respect. That’s earned. It’s up to journalists to question what they’re told, not simply repeat it because it’s someone’s “truth.”

By the end of the same month she had become editor-in-chief of "The Baron" Slatz was fired and the Board of Directors issued and apology:

We apologize that The Baron published articles that gave voice to harmful & hateful ideas & opinions this week. We are working to remove this content from our account as part of our commitment to editorial accountability. Full statement: https://t.co/HYm8D6RAxy)
— The Baron (@thebaronsj) February 1, 2018

That was a thing.

Also a thing was her L. Ron Hubbard apologia: 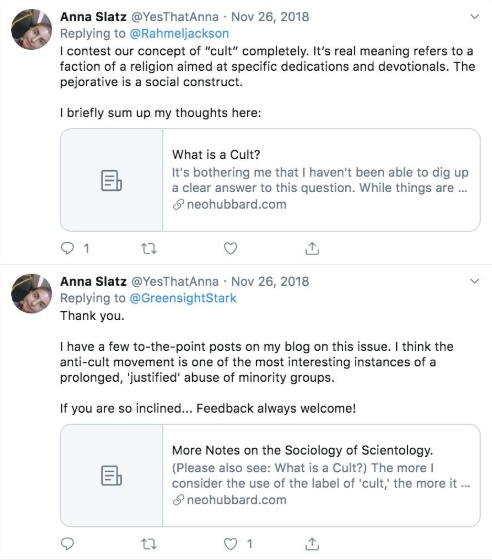 Though she appears to have taken down the website it can be found via the Wayback Machine. Not many articles are accessible via the archived web pages, but I did find this one rather interesting: 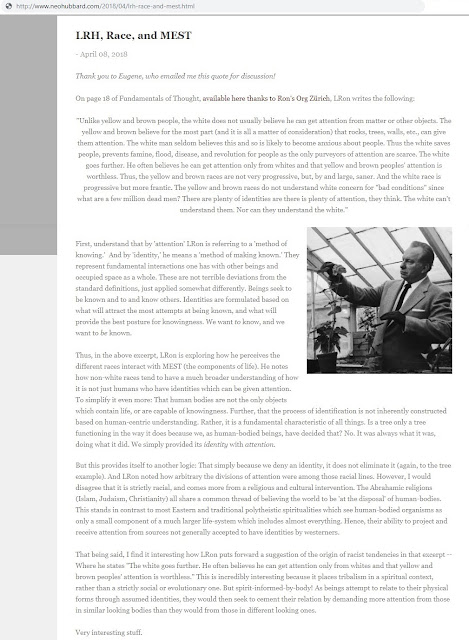 Hey, I'm as interested in new religious movements as the next guy, but Scientology seems a bit.... I don't know....

In any case, this ladies and gentlemen is Anna Slatz (aka Anna de Luca), another luminous figure in "The Post Millennial" universe.
Posted by Nosferatu200 at 12:32