Cameron vs. Van Hamme: Battle of the Douchebags

Not a particularly classy title for this article, but I believe that most readers will find it apropos.

I think we can all accurately define Ronny Cameron as a white supremacist at this point, right? 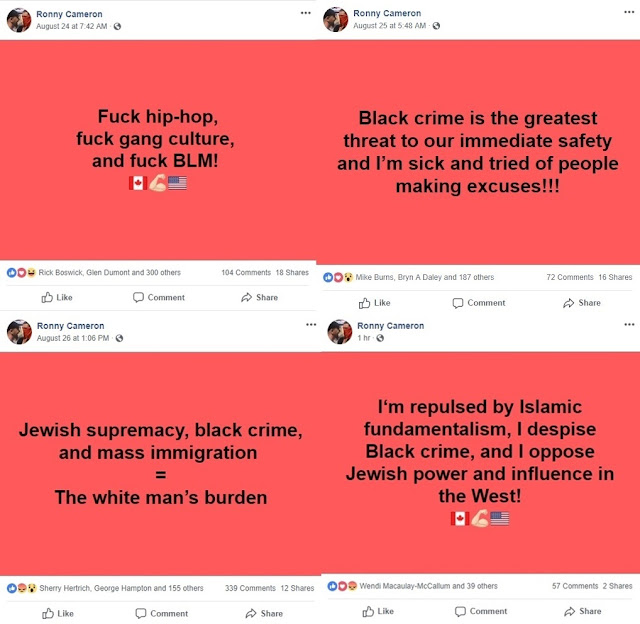 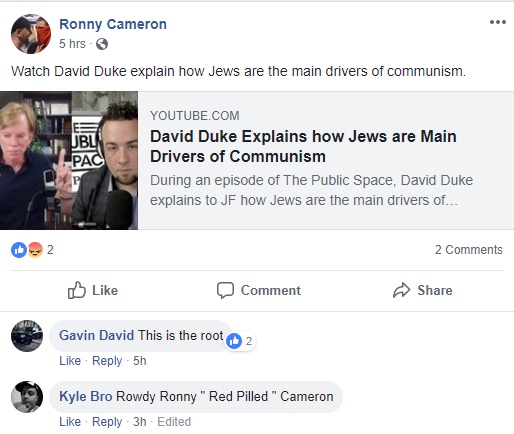 None of this is of particular surprise given the trajectory Cameron has been on the last year of course. What is new-ish is Cameron's apparent belief that he is the font of knowledge on a broad range of scholarship, including anthropology and human evolution: 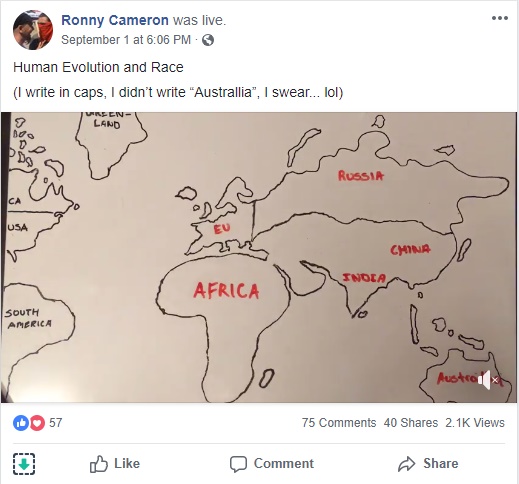 Full disclosure here. This writer has a particular passion for this subject having a background in history, sociology, and anthropology. Suffice it to say that this was especially painful for me to watch because Ronny Cameron is really a blithering idiot who really doesn't understand the topic he is covering but who has started to present himself as an authority on all the subjects he talks about. This particular video, which I won't subject ARC readers to, is filled with misrepresentations, falsehoods, and pseudo-science that would give even the most patient person a headache. Honestly, I think Erich von Däniken might be a more credible and knowledgeable scholar by comparison, and he is a fraudulent hack.

After watching the entire video (because I'm a damn masochist apparently) I had only four words enter into my mind which appropriate encapsulated my thoughts:

No me thinking Ronny an idiot shouldn't come as a surprise to anyone, but more and more people who might be considered alt-right -- even if they don't consider themselves to be alt-right -- have come to the same conclusion.

With Steven Myatt moving to Alberta (yeah, that's a thing) and Ronny needing to be in conflict with someone, it didn't take long for him to find someone else to beef with: 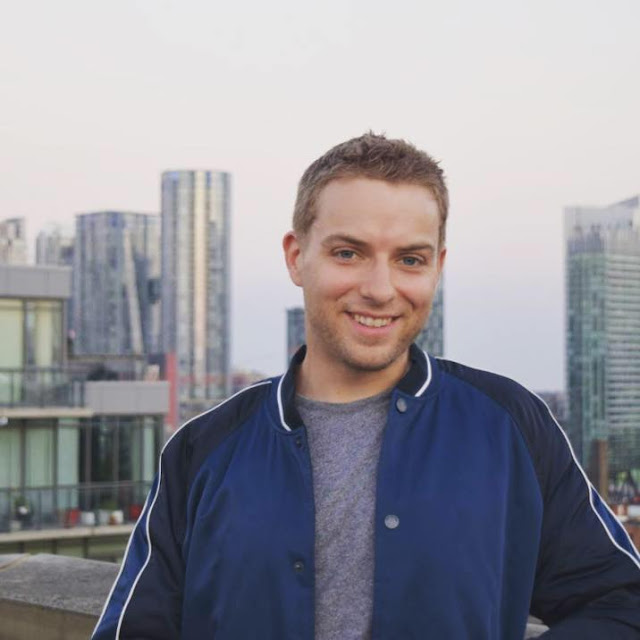 Alex Van Hamme runs Free Bird Media and has links to folks like Faith Goldy, Paul Fromm, and James Sears. While ARC regulars are likely well aware of who he is, others might remember him from these stories that came out during the Ontario election:


A couple of days ago, Van Hamme found himself in a dialogue with Cameron who was using an alternate Facebook profile: 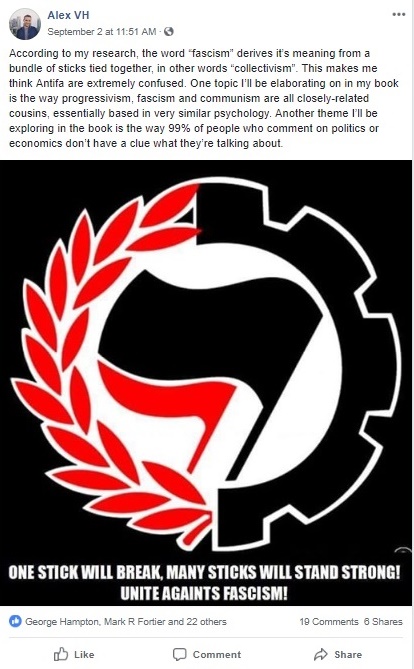 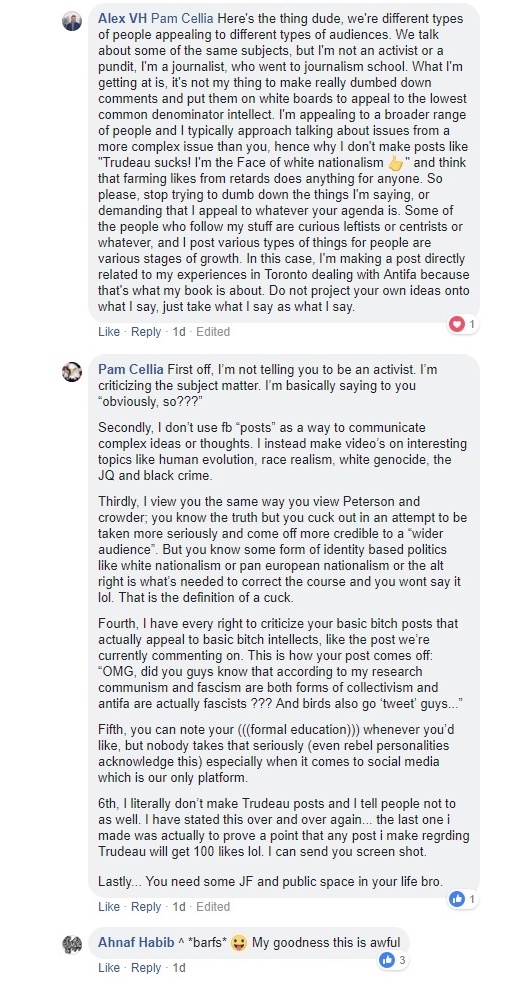 It's clear that Van Hamme had been annoyed with Ronny for some time and this exchange seems to have been the straw that broke the camel's back since soon after he posted a video slamming Ronny as an idiot:

Van Hamme certainly has a bit of an ego himself based on how he characterizes himself, and I'm not sure I'd be so uppity in touting my journalistic credentials if I considered an interview with "Dimitri the Lover" to be a significant coup:

Still, it's hard to argue with Van Hamme's characterization of Ronny.

It wasn't long before Ronny caught wind of the video. He responded in a dignified, measured, mature, manner befitting his self-proclaimed status as the face of white nationalism in Canada.

And by dignified, measured, and mature, I mean an hour and forty-minute profane dis track because Ronny gotta Ronny.

The video is too long to post in its entirety so I have currently cut it into 14 clips. I may very well come back to the this article at a later date to edit for the juicy stuff, but I'm tired and cranky so I'm making you sift through it all if you have the stomach. My personal favorite part though was when Ronny started bragging about his 130 IQ based on an online IQ test. I'm sure many readers have done these tests as well. I've done several in the past for shits and giggles and my IQ ranges from 120 to 250 based on these tests. Now a 120 IQ might not be out of the question, but I am not so arrogant to believe I have a 250 IQ. Suffice it to say I have come to question the scientific rigor of IQ tests that my mother shares on Facebook:

I know, I know. Massive overkill. I just couldn't bring myself to spend the necessary time to edit this properly.

Later, Van Hamme replied to Ronny's missive with an offer to a debate on the topic of Ronny's choice.... so long as he can afford to pay for the privilege:

Jesus, it's sometimes hard to figure out who the least likable person is during these beefs because they really are all the absolute worst.

So Ronny is stupid white trash (and he is), yet alex is a moderator on Goudreau's Canadian Nationalist Front...yeah.. got it.