Well, the past week has certainly been interesting if you are interested in fringe alt-right Toronto mayoral candidates:

Looking forward to @marksaunderstps @TPSOperations & @JohnTory being loud & clear that police are not permitted to campaign in uniform (for anyone, but especially for Nazi sympathizers) and that these guys were out of line in so many ways. Waiting eagerly... #TOpoli #ONpoli pic.twitter.com/y6h6FyuKiO
— Rima Berns-McGown (@beyrima) August 28, 2018

The TPS subsequently claimed that they didn't know who Goldy was and only appeared at her event because of a report that there could be "possible trouble" which is pretty vague, but.... sure, let's go with that:

Toronto Police's response to cops posing for photos with white nationalist Faith Goldy. IMO at the very least concerned citizens could argue that for a law enf org big on "building trust," more discipline needed around these acts. No just, "not my problem" https://t.co/ZxUWe4BrEx
— Steven Zhou (@stevenzzhou) August 28, 2018

Dear @TorontoPolice, since you regret Faith Goldy tweeting photo of her and Div23 officers as if they support her, will you at least be asking Goldy to remove the tweet/photo from her feed?
— Steven Zhou (@stevenzzhou) August 28, 2018

For her part, Goldy decided to lash out at a group that ARC is proudly associated with:


It seems that Faith Goldy has been deep sixing some of her past social media posts (eg: promoting the "white genocide" myth) and denying things that she has said and written in an effort to sanitize her image (good luck with that). Despite appearing on a neo-Nazi podcast, hanging out with members of Students For Western Civilization, and promoting the far-right antisemites in ID Canada (formerly Generation Identity Canada), Goldy appears to have come to the conclusion that her electability in one of the most diverse cities in the world might hit a bit of a roadblock should more than half the population realize she can't stand them. To that end, the woman who casually discusses "the JQ" in interviews has even found some Jewish-Canadians who are willing to associate with her: 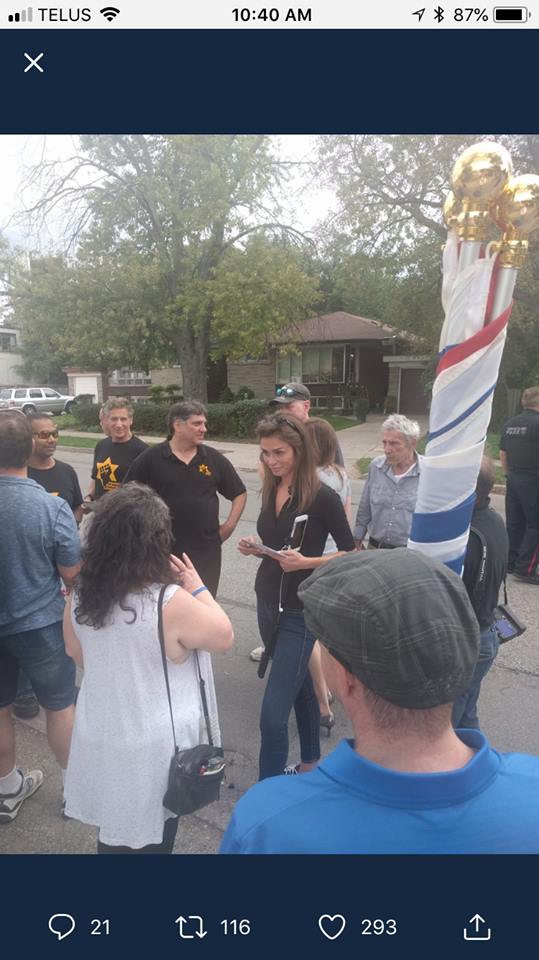 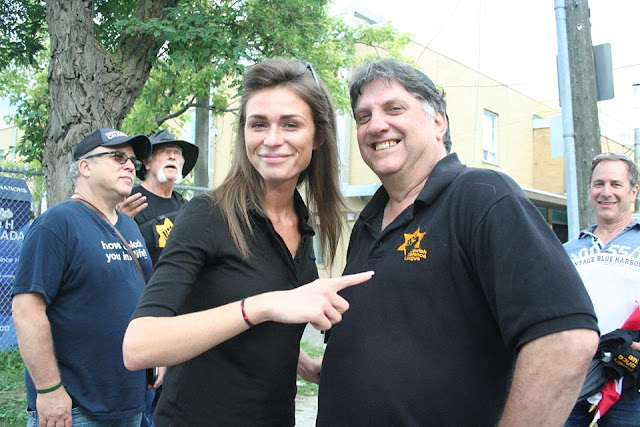 Now I can't be entirely certain, but it looks like this might be near the B'nai Brith headquarters where Palestinian supporters were protesting how the organization has characterized the Canadian Union of Postal Workers (CUPW) and the Palestinian Postal Services Workers Union (PPSWU). Others arrived to counter-protest, including some well-known (at least to ARC and ARC readers) Islamophobes as well as members of the JDL. Two of those individuals were Mary Forrest and Laura Lee who have spoken at a number of Islamophobic rallies:


At one point they discuss the necessity of what Laura refers to as a "snitch line" to report Muslim-Canadians who's children wear hijabs. In this section I make some editorial comments:


And not surprising, they loves them their Faith Goldy who arrived later:


None of this comes as a surprise, however the next clip is especially disturbing in how they casually talk about engaging in politically-based murder:


This rhetoric (as well as continuing to suggest the actions of the man who used a van to murder people in Toronto was really inspired by Islam despite being demonstrably false) also isn't a surprise. ARC has reported time and time again about threats being made against political figures as well as individuals on the far right promoting the elimination of people they consider "traitors".... that being people who legally advocate for or enact through the democratic process policies the far-right authoritarians don't agree with:

The fact that Rick Boswick doesn't seem to understand that the "Night of the Long Knives" involved Nazis killing rival Nazis aside, the violent rhetoric seems to be ramping up online. For example, Proud Boys Canada seems to think that genocide is an effective means of keeping uppity minorities in check: 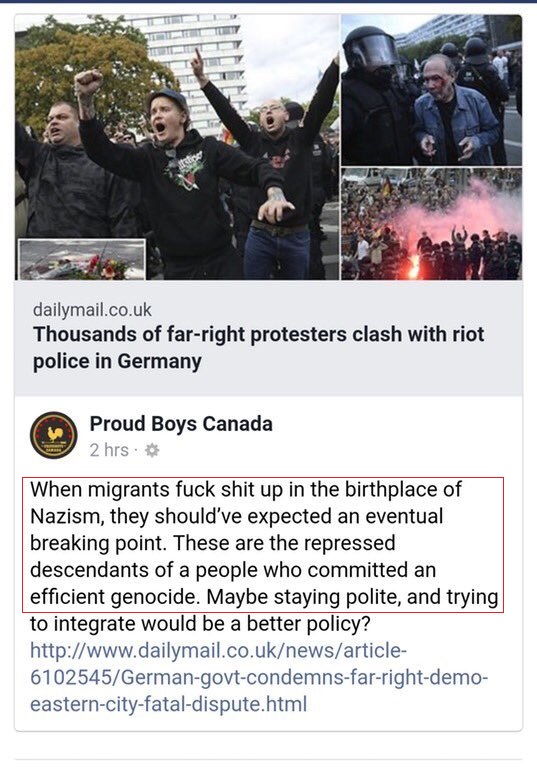 And Lynn Redden who heckled both Prime Minister Trudeau at a town hall in London and Iqra Khalid at an anti-racism event in Toronto helps get the killing boner of her followers up with a bit of conspiratorial Viagra: 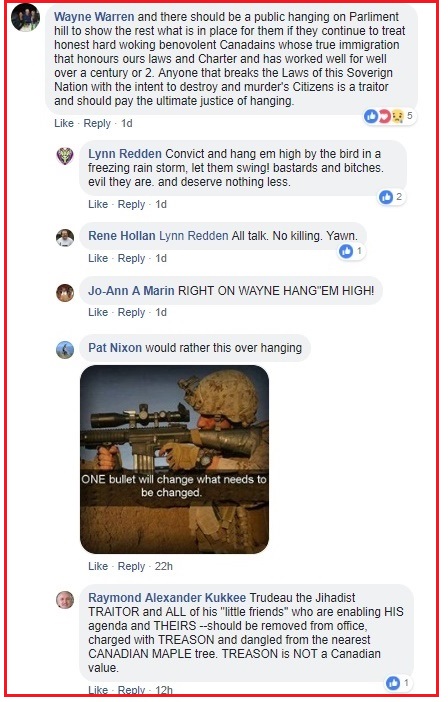 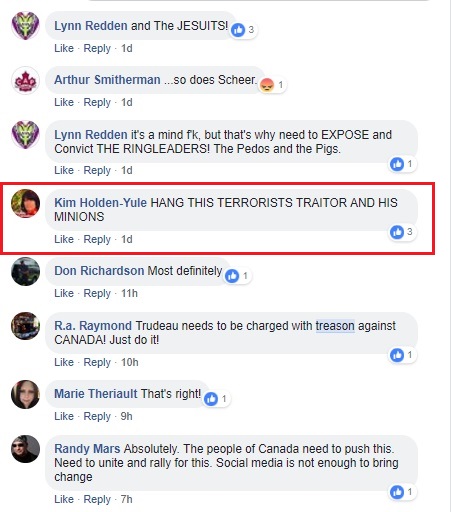 This brings me to the big reveal which won't exactly be revelatory to anyone paying attention. Despite the claims of these people and groups to be "patriots" of advocating what they claim to be Canadian culture -- Western values such as democracy, free speech, religious freedom, equality, and other such platitudes -- these people really are authoritarian fascists who don't give a damn about Western cultural values. In fact, democracy is simply a hindrance if it doesn't go their way: 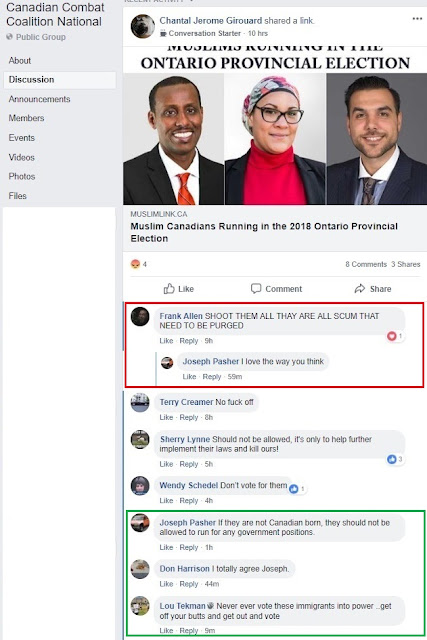 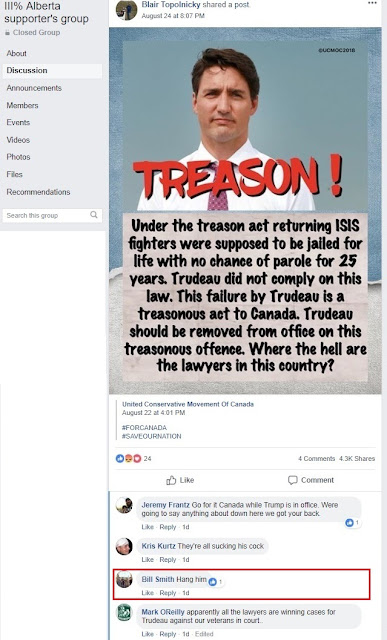 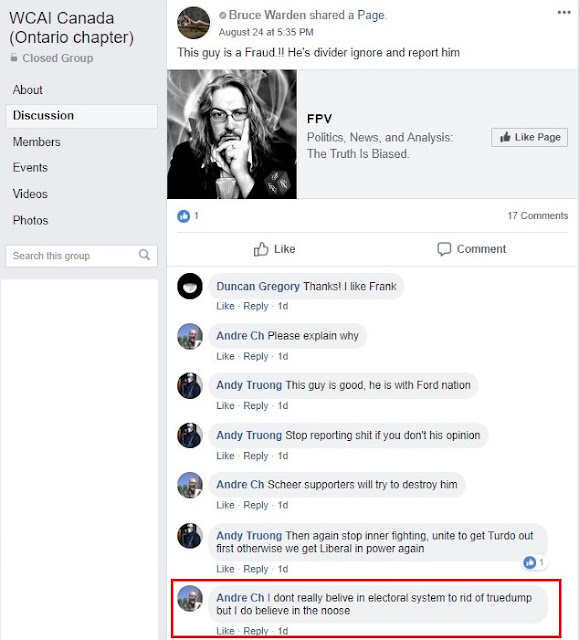