It also attracted the haters: 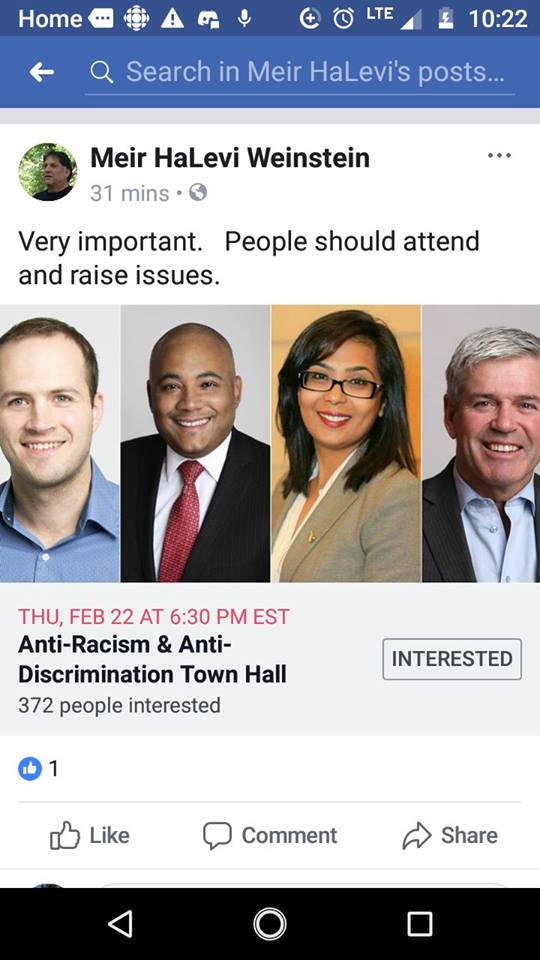 There are a few first hand accounts of what occurred when the Islamophobes and racists, who were in the minority but did not govern themselves in a manner that the majority did, disrupted the event.

Those present who are known to ARC include Meir Weinstein of the Jewish Defence League, 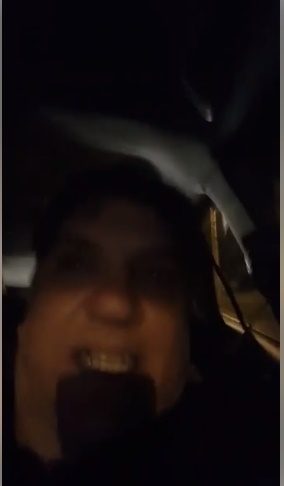 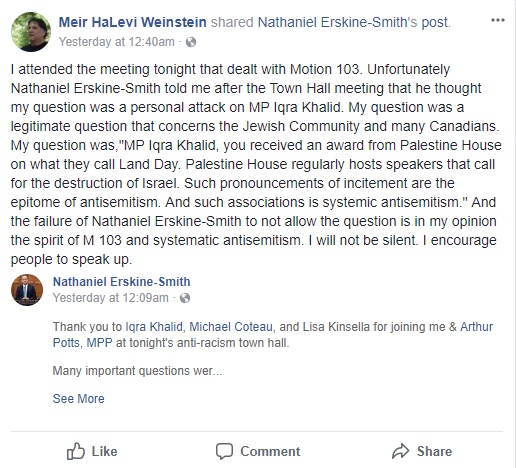 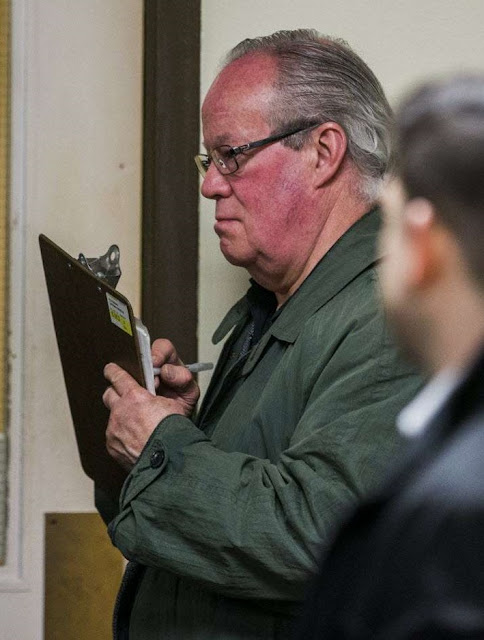 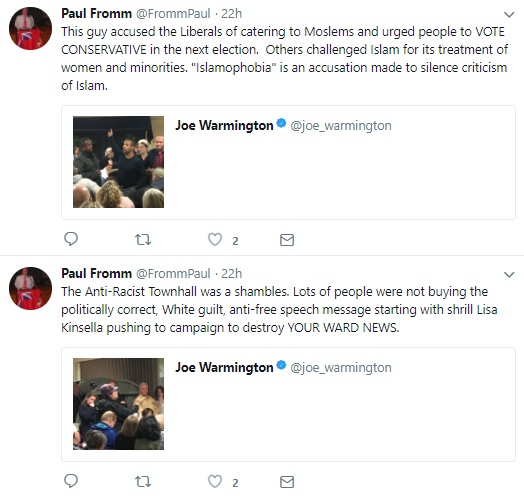 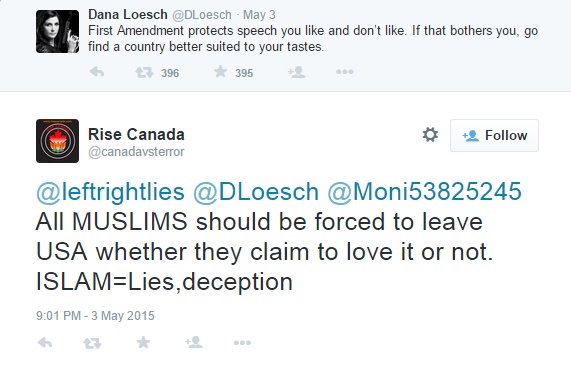 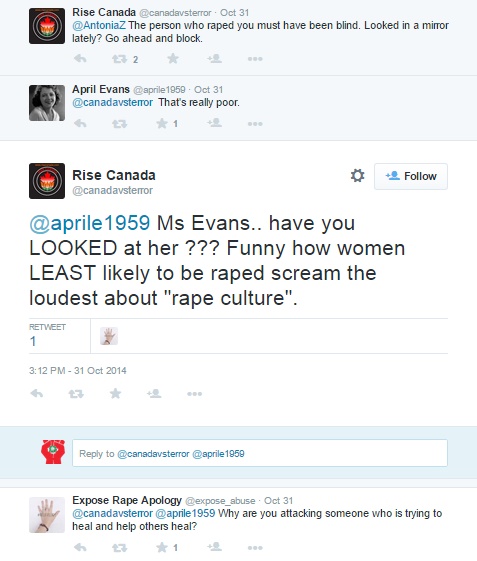 Lynn Redden who leads the unintentionally ironic Suffragettes Against Silence and who has attended a host of anti-Muslim events including the recent Ottawa protest and who made headlines heckling Trudeau at a town hall in London, 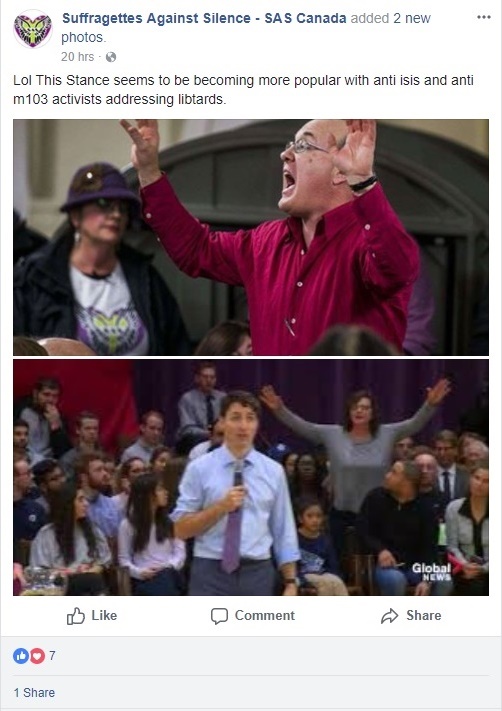 Eric Brazau who has a very long history of anti-Muslim agitation and who's criminal record includes assault,

And Lawrence who is associated with the Proud Boys and JDL; he is also seen frequently at anti-Muslim protests and has made threats directed towards a number of female anti-fascists: 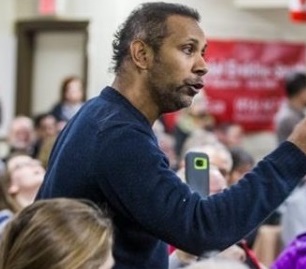 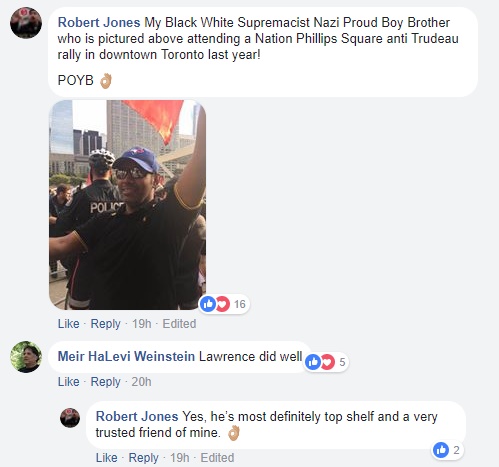 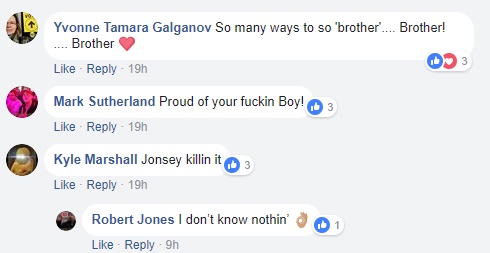 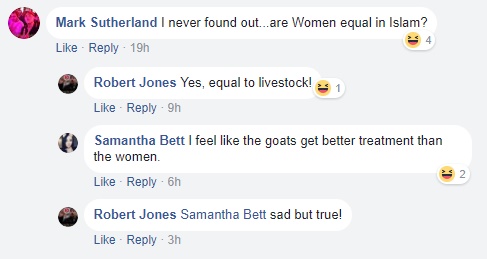 One of those who wrote a report on the event was Warren Kinsella. ARC would invite readers to click on the following link to see his account:

THE NIGHT THE PIGS ATTACKED A MUSLIM WOMAN IN A CHURCH

The other, which ARC received permission to republish, was provided by our friends with East Enders Against Racism who received the following:

Last night. Not going to mince words. It was rough.

At least an hour before the event began, the fascists started to stagger in. A few easily recognized, like Paul Fromm, Lynn Redden, Eric Brazau, and Meir Weinstein. Also in attendance, a collection of those who rally with them, including Lawrence, known for his instability, repeated explicit threats of violence, and quick escalation. They also brought some new photographers to support their doxing habits. It was a who’s who of racists, with one notable exception. James Sears was not spotted.

The student group began with a land acknowledgment. The opening comments framed the conversation around recent examples of overt racism in the GTA, such as the hate graffiti at the lifeguard station. EEAR was acknowledged for all the work done organizing and mobilizing locally. The rules were set. Those in attendance with questions should raise their hands, wait for a staffer or volunteer to come to them with a pen and a card to write on, write their question down, and it would be brought up to the panel. EEAR was acknowledged in the opening comments for all the work done organizing and mobilizing locally. Lisa Kinsella spoke about the history of the fight against Your Ward News.

It took very little time for things to fall apart. Racists began interrupting, interjecting, and disrupting almost immediately. A few rude voices at the start when Nathaniel Erskine-Smith was speaking, and escalating to shout over Iqra Khalid when she took to the mic. Initially, attempts to [prevent] this were kept light by the panel, asking politely for respect of the rules, sending a staffer to gently tell them to settle down, occasionally offering a snap comeback (one highlight was when a racist loudly commented that it was “better when the races were separated”) and MP Coteau responded smoothly, “Well, then we would all be Indigenous here, wouldn’t we,” and the room erupted in cheers.) But it was mostly a gong show. Ultimately, allowing any platform to fascists was shown again as a failing proposition.

I wish I could say the discussion had been more fruitful. But the truth is there was no way for it to be so. In a room a quarter full of overt racists who want nothing more than to recast themselves simultaneously as heroes and as victims, how can a productive conversation be held at all? They reject the very premise of racism, institutional or individual. They reject any conversation or question that begins from the simple acceptance of the fact that racism exists. Because of this, some questions were skirted around deliberately. Most notably, in the time the event was setting up and people arriving, the devastating verdict came in the Tina Fontaine case that saw another Indigenous woman denied justice. A question framed on this was put to the panel on how we can address systemic racism in judicial appointments and jury selection. The question, however, was not read in full. It left out the Fontaine verdict entirely. No context was offered for why the question was raised. I watched the faces as the questions were being reviewed and could tell from the expression that the news of the verdict was coming to them for the first time. Given the volatility of the room, I believe omitting the terrible reality of the verdict was intended to try to avoid any further escalations. But again – if we can’t confront and speak about the truths of racism at an anti-racism event, what, I ask, is the point at all?

The two moments that most honestly framed the evening were these. The racist disruptors, while appalling in every way, were overt and present enough that the panel was shaken, as were many in the community. As upsetting as it is to witness them, it is often also a call to action for many to challenge them. The other was an Indigenous woman who managed to get the mic at the close and spoke passionately about the raw and horrible truth of Canada’s continued theft of Indigenous children. She did not hesitate to speak the word “genocide.” So the night was bookmarked by the spectrum of racism – on the one side, those who deliberately spread it and wish to further entrench it, on the other, its devastating impacts.

I won’t throw the panel entirely under the bus. I will first recognize the grace and courage of Iqra Khalid, who bravely walked into a room that certainly included people who have sent her hateful comments and threats. She spoke warmly about our collective strength, values of compassion and understanding, and didn’t waiver, even when being attacked from the floor for being a Muslim woman. I will also acknowledge Michael Coteau, who at various points spoke both with the firmest opposition heard last night to the racist infiltrators, and also about some specific issues of importance in combating institutional racism, including the deliberate data gaps that allow racism to go undocumented, the destruction of carding data, and the underemployment of racialized people. I will gratefully acknowledge the clergy and the predominantly Black congregation of the church for allowing the event there at all. I will also recognize that the intent of the evening as organized by Nathaniel Erskine-Smith with support from Arthur Potts was a good one.

But the impact is more important that intent. Always.

A third account comes from the ever so classy bigot Lynn Redden which I think sort of puts her and her supporters in context: 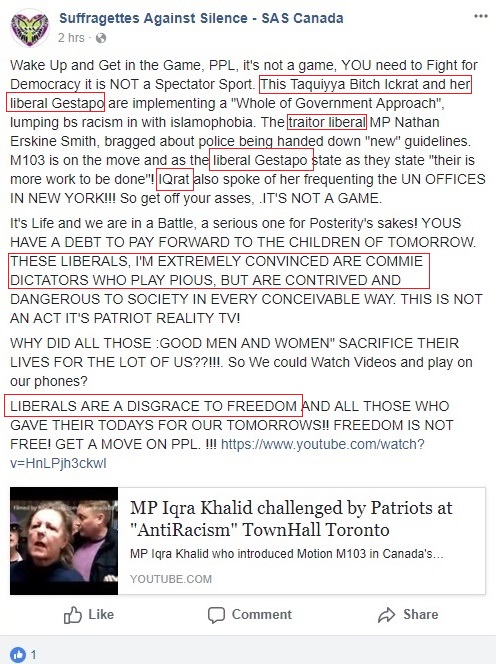 The only press that covered the story was the "Toronto Sun" and though Joe Warmington did acknowledge the poor behavior of the Islamophobes, he couldn't resist the, "there were bad people on both sides" canard because some of the anti-racists and anti-fascists in part because some of the participants who recognized Paul Fromm told him to "fuck off."

Truth be told, I'm of a mind to think that is how Paulie should be greeted by anyone who happens to see him, but what do I know?

Some of the Islamophobes took video of the event so the reader can determine if "both sides" should warrant criticism. The following are clips from a video taken by Weinstein:

Redden also posted links to the Weinstein video as well as one by Banerjee. Her comments as well as those of her supporters continue to be most enlightening concerning her motives:

This event should provide yet another reason why anti-racists/anti-fascists shouldn't engage with bigots as the bigots have absolutely no desire to engage in a civil discussion. They are there to disrupt as, in a rare bit of honesty, Kevin "No Show" Goudreau demonstrates: 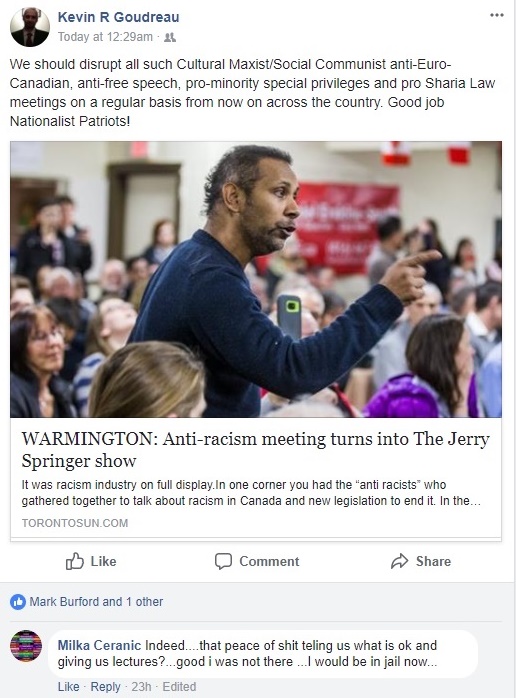