So ARC readers may remember that an article primarily focused on the reaction to the hijab story in Toronto also included some information on Shawn Le Guerrier. Le Guerrier had been arrested earlier last year for his involvement in a number of mosque attacks in Ottawa as well as assaulting a police officer. In the story published on January 21 ARC noted that Le Guerrier had been active on VK, a Russian-based social media site that has become popular in some far right circles due to the.... shall I say less stringent restrictions regarding hate propaganda: 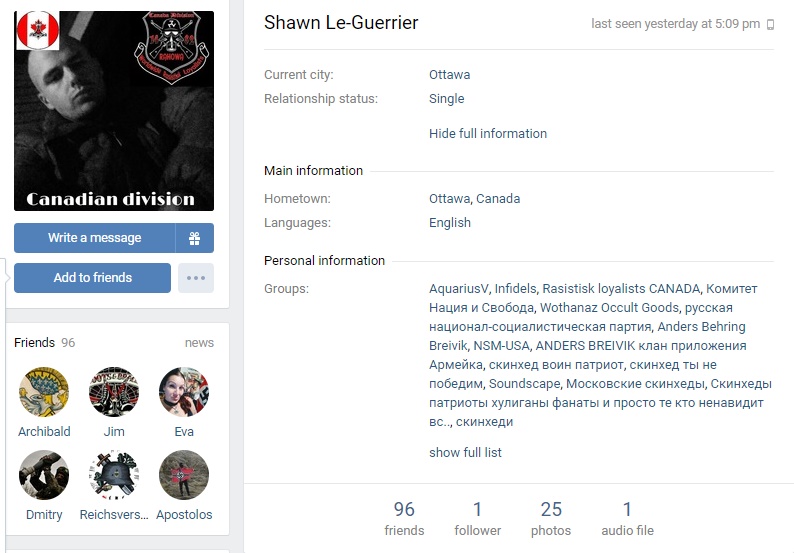 For example, some of Le Guerrier's posts included the following: 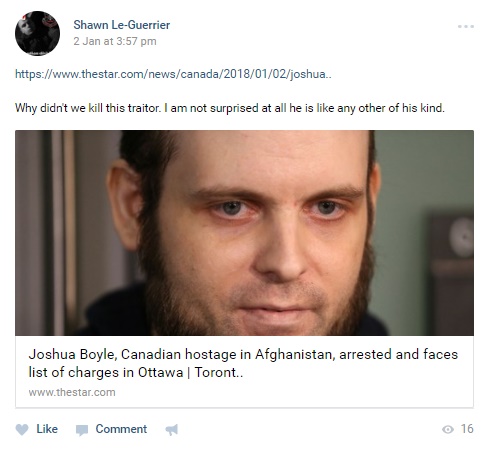 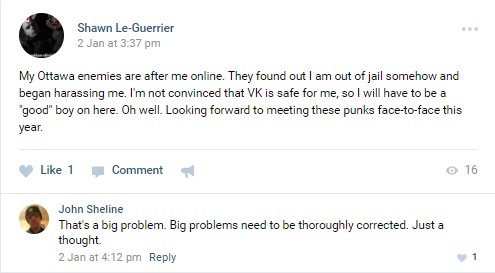 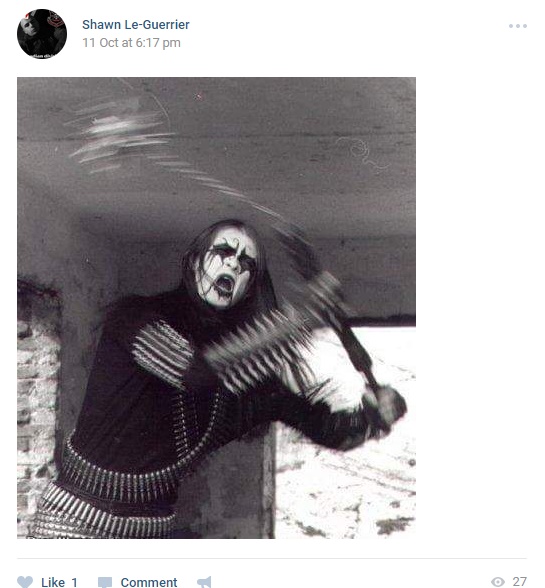 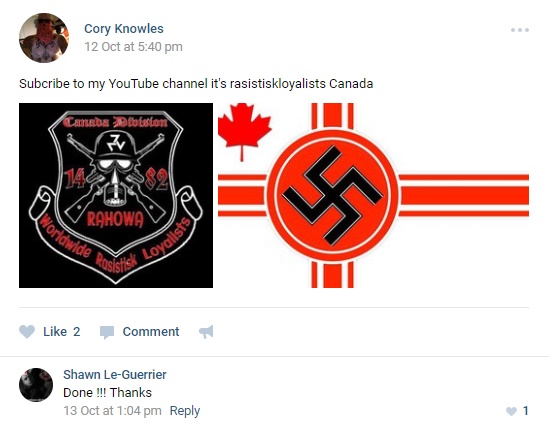 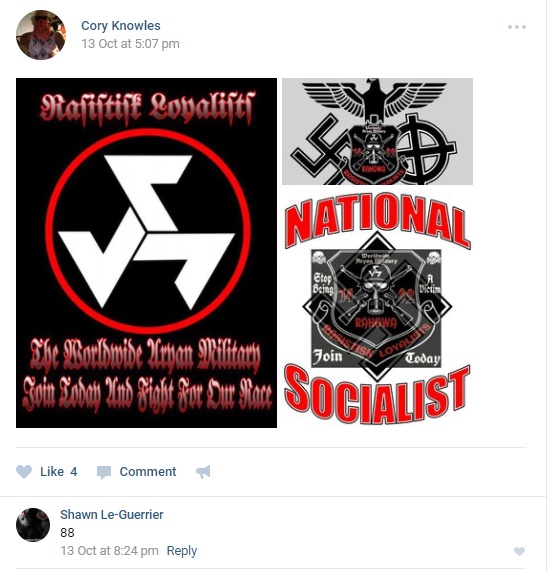 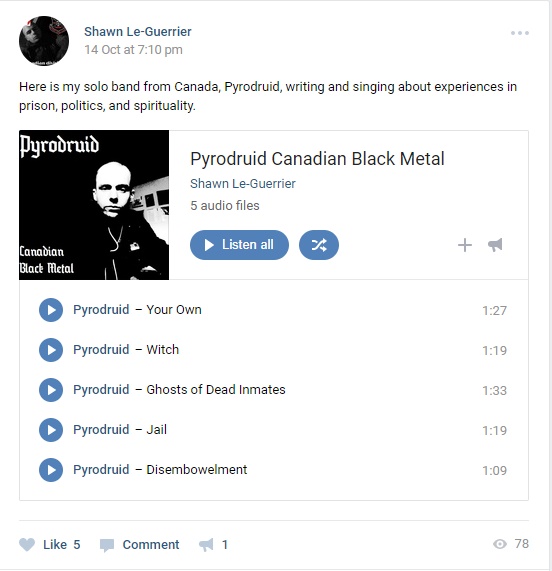 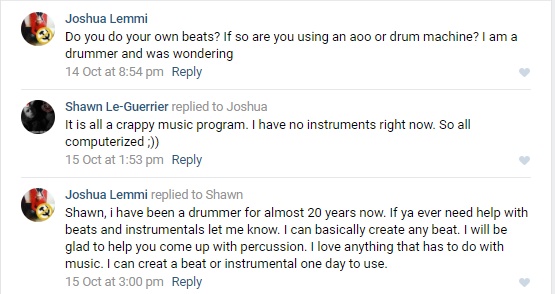 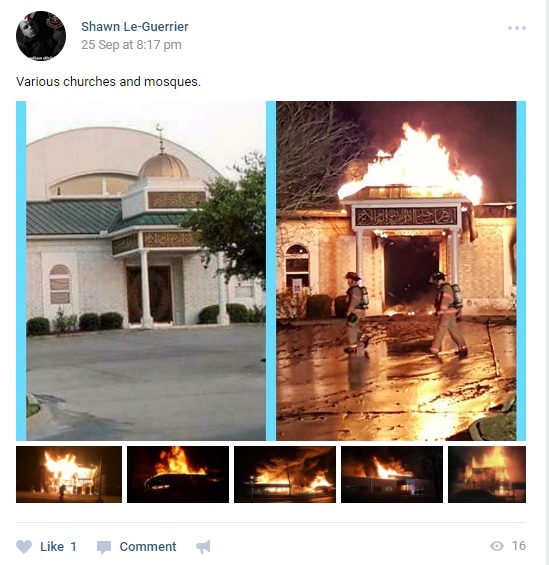 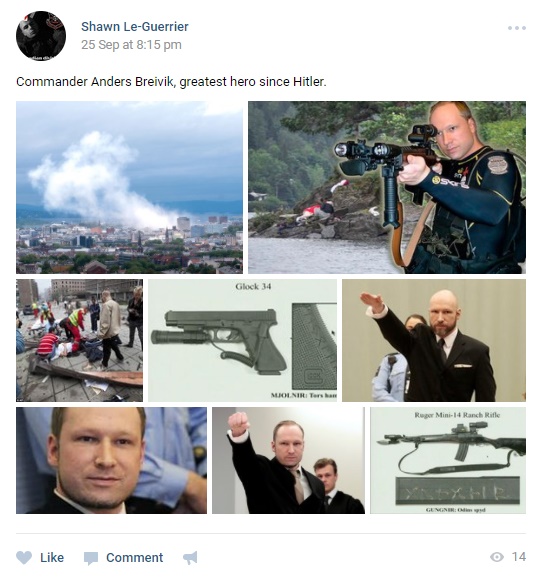 Well it seems that the msm has decided to pick up the story as well, though I can't help but noticing there doesn't appear to have been any credit given to lil' ol ARC:

....
Shawn Le Guerrier, 28, was charged with wilfully promoting hatred, uttering threats and several counts of mischief in connection with the attacks on April 12 and April 25 at the Islam Care Centre on Somerset Street West and the Ottawa Mosque on Northwestern Avenue. He was also charged with two counts of assaulting a police officer, resisting arrest and several counts of violating his release conditions.

According to court records, Le Guerrier called 911 himself to report the first incident on April 12, saying that he had smashed windows at the Islam Care Centre on Somerset Street and the Ottawa Mosque on Northwestern Avenue. He told the dispatcher he was in a “dissociative state” — a psychiatric term indicating a detachment from reality. Le Guerrier was arrested and released the next day with orders he stay away from both locations.

On April 19, a small fire was set at the rear of the centre and police later found Le Guerrier’s fingerprints on a piece of canvas found at the scene.

Then, on April 25, Le Guerrier was in a Bank Street bar and bought a beer for woman he had met. When he found out she was Jewish, however, he began berating her with anti-Semitic comments and making Nazi salutes. Police were called and pepper-sprayed Le Guerrier, but he was able to escape and ran to the nearby Islam Care Centre and again hurled a rock through a window.

At his trial on Dec. 18, Le Guerrier pleaded not guilty to all charges and was found not criminally responsible for his actions by Justice Robert Graydon.

The revelations concerning Le Guerrier’s online activities may very well prove to be a factor in where the Ontario Review Board decides he will be staying for the foreseeable future:


At Le Guerrier’s trial, both the Crown and the defence urged Judge Graydon to deliver a not criminally responsible verdict. Two psychiatric reports — one done privately for Le Guerrier and one ordered by the court — were submitted as evidence, but ordered sealed by the judge. Le Guerrier’s lawyer at the trial, Carol-Lynne Saad, would not comment on the case.

A not criminally responsible finding means Le Guerrier’s existing bail conditions stay in effect, including that he stay away from the mosque and the Islam Centre, and that he not possess weapons. His fate is now in the hands of the Ontario Review Board, a panel made up of experts, including judges, psychiatrists and other mental health professionals. The board reviews the case and can issue orders ranging from detaining the person in hospital, releasing them with certain restrictions and privileges, all the way to issuing an absolute discharge if the board finds “the accused is not a significant threat to the safety of the public.” The board can’t, however, order Le Guerrier to undergo treatment.

Le Guerrier’s review board hearing is on Feb. 20 at the Royal Ottawa Mental Health Centre. Le Guerrier was an inpatient at The Royal at the time of his trial. Graydon ruled that he was to live either at The Royal or with his parents until the review board makes its decision on his fate.