So, About Those Laura Loomer Legal Costs.....

It has been a while since ARC posted a story concerning Ezra Levant and "Rebel Media." In some ways they seem to have recovered from the disastrous spring and summer of 2017; the anti-Semitic rants of Gavin McInnes, Laura Southern and Faith Goldy dancing around the edges of white nationalism (Goldy herself appears to have definitively taken the plunge into white nationalist after her Charlottesville experience), the scandal in which Levant agreed to pay what he  referred to as "hush money" (his words), and other incidents that were significant body blows. As a result a number of high profile "Rebel Media" personalities left either because they didn't want to be associated with the brand any longer, appeared to have had "creative disagreements" with Levant, or they were fired. The latest to go appears to be EDL founder Tommy Robinson (born Stephen Christopher Yaxley) who has now, "gone independent":


We might perhaps speculate as to the reasons for this departure:

This is what Levant told Robertson: “Lauren Southern, Jack Posobiec, we had our differences, but you’ll notice that they have been positive since they left us … do you see how smart they are … they may have grievances with me … they’re not actually saying there’ve been problems, they’re not grumbling publicly because that would be against … their contractual duties to me”. Mildly threatening. Then came the crunch.

“I am prepared to give you and Caolan a very nominal sum to sign a second confidentiality agreement. So don’t go down that road … launch yourselves as independent … be totally positive like Lauren Southern … ‘Hi guys, we had a great run at the Rebel, but now we’re doing something even better … we’re going independent, we’re gonna do whatever we want. We’re gonna do this, we’re gonna do that’. Don’t even mention the Rebel”.

Now let’s look at what Lennon told his followers yesterday. “Now, I’m going independent … that’s right, I’ve decided to leave the Rebel to go out and do it for myself … no more paywall and I’ll be my own boss … I’m going to have total freedom to cover the stories that matter to everyone … you’re going to be hearing a lot more from me. This is just the beginning”. It was his decision, he’s being totally positive. Well, maybe.

The problem for Lennon is not only the hint of a forced smile at the end of that video, but also the tape of Ezra Levant describing more or less the same thing when he was sacking Robertson. What is worse for Lennon is the time at which this parting of the ways has occurred: he is in the middle of what could be a disastrously expensive legal action against the Police, and may still be hit with one or more contempt charges. 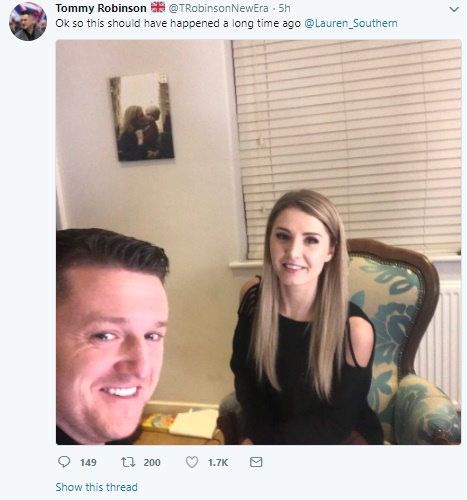 But let's go back where I mentioned the "Rebel Media" personalities who have since left Mr. Levant's services and look specifically at one Laura Loomer.

ARC posted a story on Loomer before concerning a feud between herself and another alt-right personality into which Lauren Southern (and to a much lesser extent Faith Goldy) stepped in. Loomer wasn't with "Rebel Media" for long but for a brief time she was one of the most visible of Levant's hires. In June 2017, Loomer stormed the stage at a "Shakespeare in the Park" performance of Shakespeare's "Julius Caesar" at the Delacorte Theater in New York. The staging had recently become controversial because, adapting the play to a more modern setting, the character Julius Caesar was portrayed by an actor with a similar look to the current occupant of the White House. Despite previously having the same role played by an African-American actor when Mr. Obama was in office, conservatives were enraged and demanded the play be shut down, Ms. Loomer amongst them:

The person who filmed this is Jack Posobiec who had also briefly worked for "Rebel Media" which began to suggest that this wasn't exactly a spontaneous act of righteous indignation, a feeling further confirmed when it appeared that Ezra Levant had already purchased the domain name, "FreeLaura.com" six hours before Loomer acted.

Be that as it may, Loomer's stunt did have financial repercussions for her personally. The website Levant created was, in part, to solicit donations to help Ms. Loomer in her legal defence.

Which now brings me, finally, to the purpose of this article. Did Laura Loomer receive that money?

ARC received the following from a reader. The focus was on what is being called "Bloodsports" which is acting as another tool for alt-right recruitment (a great story can be found here):

The main guy hosting these is Andy Warski, who says he is from Toronto-ish. He was some Youtuber who pushed skeptic / anti-SJW stuff before this I guess. Basically what they are are "debates," mostly between white nationalists and some other right-wing Youtuber (sometimes it's been a leftist), which usually don't have a clue what they're getting into. Guests include Richard Spencer, Mike Enoch, Jared Taylor, and more. They use Youtube Superchat's format, which allows people to pay to have their messages stickied in the chatroom and steer the conversation. White nationalists decided to pay a lot to him to incentive letting them go on, so Andy Warski (who claims to be a moderate) makes thousands of dollars reading messages like "White power" and "it's okay to be a Nazi" and just replies "wow thanks for the contribution." As the Counter-Currents [an "alt-right" white supremacist website] article puts it, "Warski’s normie fans are getting a serious crash course in White Nationalism."

Obviously it's way too much to watch (hours-long videos every other day or so) but if it comes up in the future you'll know. There's already been some Canada-related info revealed on it, like Laura Loomer talking about how Ezra defrauds donors.

I found that last sentence to be especially interesting so I decided to take a look at this particular video. This is the part that the reader is referring to:

Now the hosts of this online Youtube chat use some pretty strong language that this writer will not repeat considering Ezra "Free Speech For Me But Not For Thee" Levant's especially litigious nature. I would also add that Ms. Loomer doesn't seem to have a problem playing fast and loose with the truth, and she does say that her legal fees were paid for by Levant.

But if there WERE additional monies collected.... and I'm not saying there were or were not.... then where did the rest of it go?