I grew up on the prairies close to the Manitoba and Saskatchewan border. Growing up I was keenly aware that bigotry and active discrimination against FNIM was not only accepted, it was expected and often enforced. For example my white friends who got drunk and got into their cars to drive home were stopped by the police, but were driven home to the waiting arms of their parents with a stern finger wag at worst (they were "good boys" after all). My First Nations friends who got drunk and tried to walk home were stopped by the police and either thrown in the drunk tank and charged with public intoxication or they were driven kilometers out of town and told to "walk it off."

Restaurants refused to serve First Nations customers and landlords refused to rent to First Nations families, and businesses refused to hire First Nations people.  "Jokes" were told about how it was perfectly legal to run over "Indians" walking on the side of the road. In one story a friend told me, she had made friends with a First Nations girl and invited her over to a pool party. When her step-father came home to see a First Nations teenager visiting his home, he kicked the girl out of the pool and told his step-daughter to, "never bring a filthy Indian into his home again."

There's a reason why the prairies have been referred to as the Alabama of Canada and Saskatchewan as Mississippi North.

"I didn't think it was wrong to degrade my Indigenous classmates, friends and neighbours.

Which brings me to recent acquittal of Gerald Stanley, a Saskatchewan farmer who shot Colten Boushie: 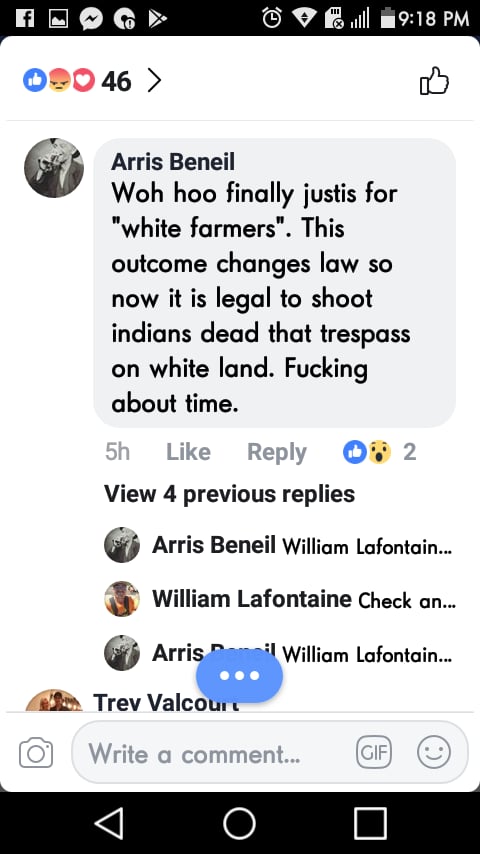 The circumstances behind the shooting aren't entirely clear, but given Gerald Stanley's own statements it is difficult to fathom how the verdict can be considered in any way just, which isn't also to say also sadly not unexpected.

For everyone who didn't attend the #StanleyTrial, this is as close as you're going to get to knowing what happened to Colten #Boushie that day.    https://t.co/lniKN6rd3e
— Terry Glavin (@TerryGlavin) February 10, 2018


Still, it is a kick in the teeth.

Also expected are those folks on the right who are celebrating the verdict. In their mind Boushie and his friends were trespassing, armed (there was evidently a rifle in the vehicle), and trying to steal from the property. Boushie's friends have another story of course but that is all academic now.

I could post reactions of the right from a number of different sites, but the Facebook groups "Canadians Against the NDP and Liberals (Information & Facts)" will serve as a representative sample since the same language and responses are found elsewhere. Before doing so, and as a bit of a contrast, I thought I would first provide comments found on the group concerning the Bundy standoff in Oregon when armed members of the Cliven Bundy family and their allies trespassed on government property, commandeered (i.e. stole) trucks from the property, and drove from the property into town with relative impunity intimidating locals: 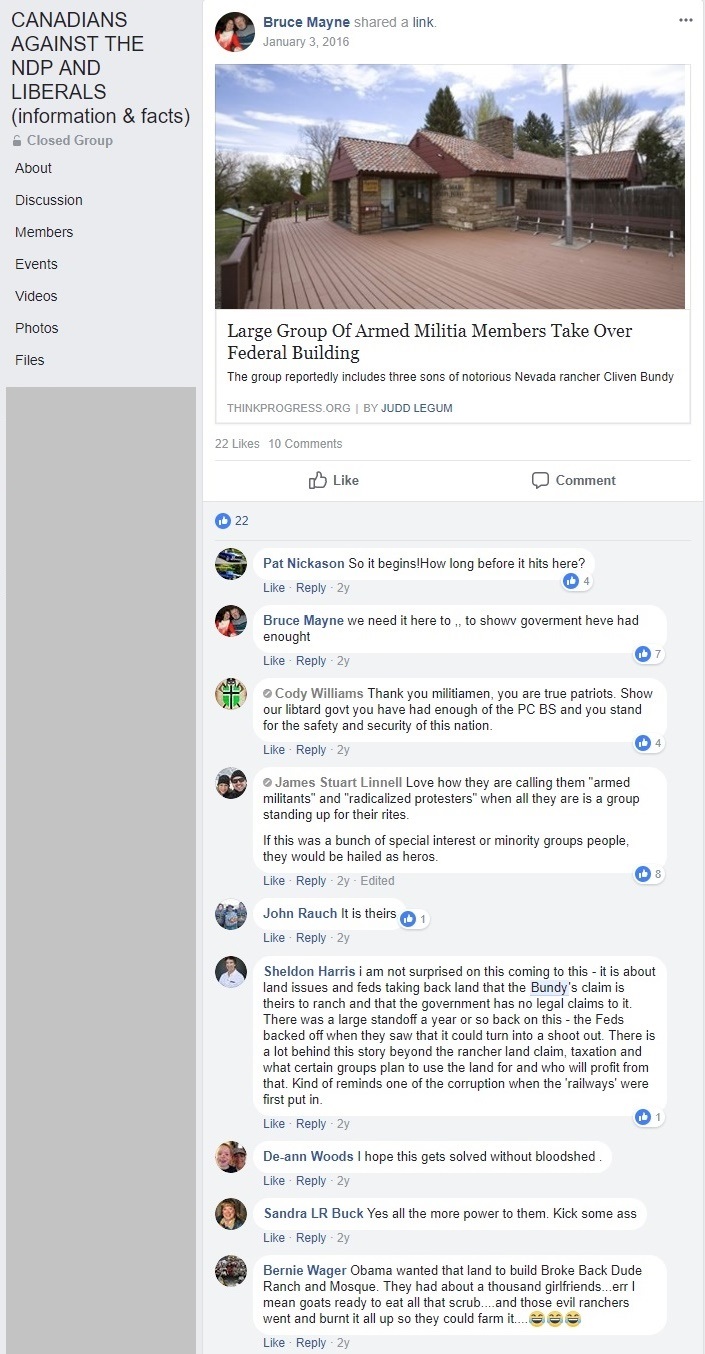 When LaVoy Finicum, one of their members who was armed and reaching for his weapon after being stopped by the police, was killed, the reaction of those posting on "Canadians Against the NDP and Liberals (Information & Facts)" responded as such:

Lets now contrast these reactions to those regarding the acquittal of Stanley and the death of Boushie: 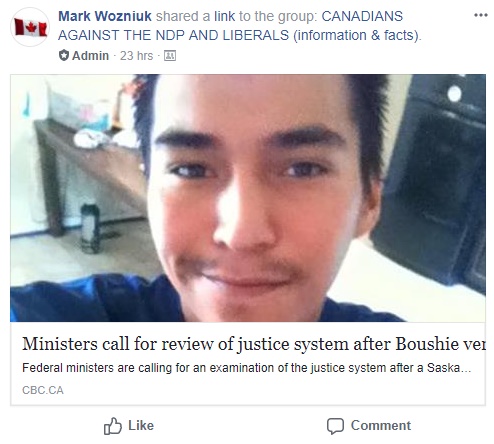 And please note the references to "shit hole" countries, riffs on the "Make America Great Again" slogan, and complaints about the "real" oppression being directed at "old stock Canadians": 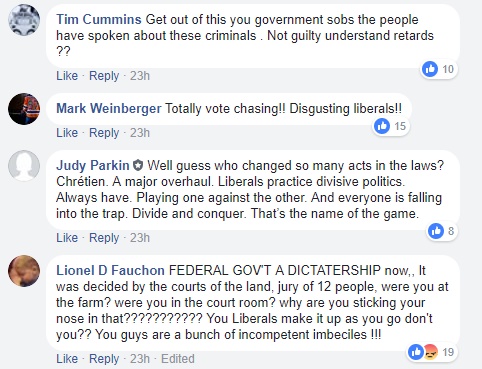 That would be a hard no Richard:

"The argument has taken root in online debate around the trial of Gerald Stanley, the man accused of killing Boushie, and it’s hard to say what’s more astounding: the ignorance underlying it, or the arrogance it implies."https://t.co/KdAJGOoDdl
— Lenard Monkman (@LenardMonkman1) February 9, 2018 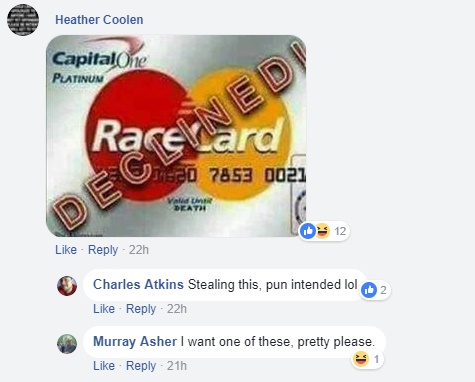 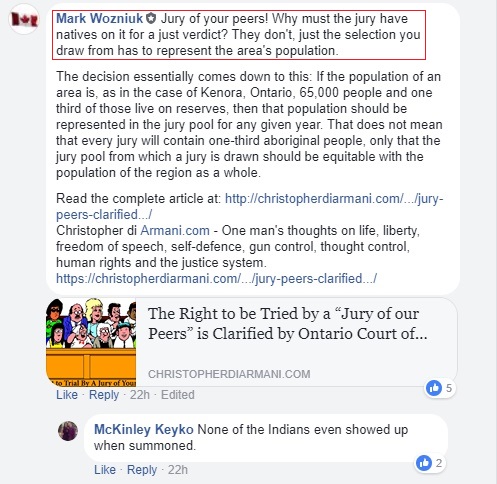 In response, I'm just going to put this here:

Don't forget: "Each time a person who appeared to be Indigenous took his or her turn, a single word emanated from the defence bench: challenge...which by definition requires... The final result appeared to be an all-white jury" https://t.co/2ejgtKvdow
— Denise Balkissoon (@balkissoon) February 10, 2018 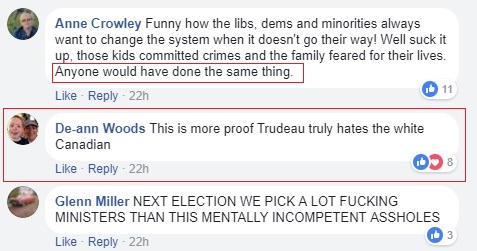 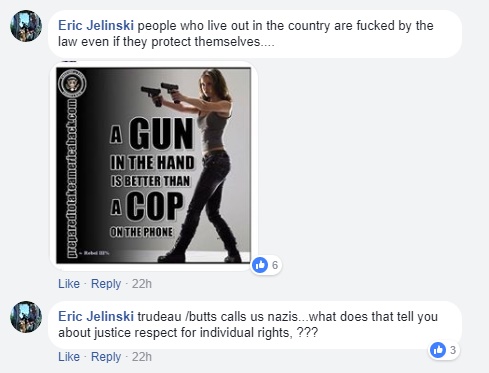 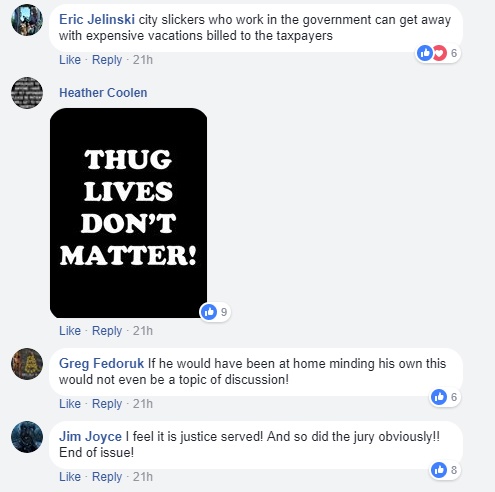 Is that so Darrin?

If this doesn’t fill our minds with rage and our hearts with despair, then it tells us a lot about who we really are., writes columnist @ShreeParadkar. https://t.co/WCPZdTsnai
— TorontoStar (@TorontoStar) February 11, 2018 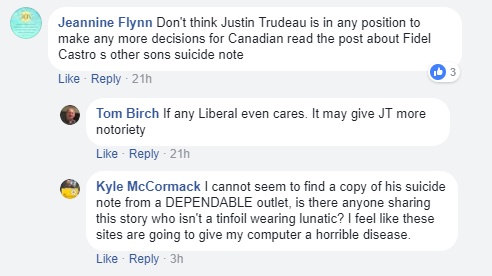 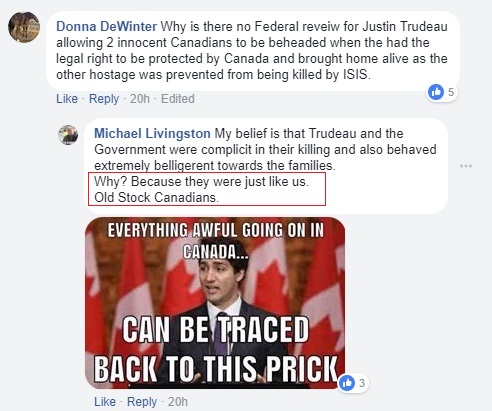 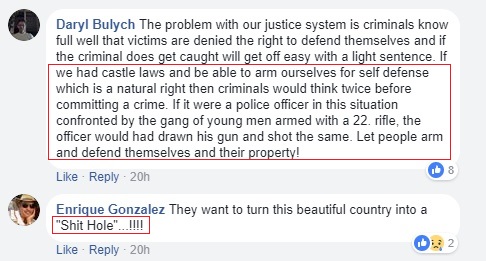 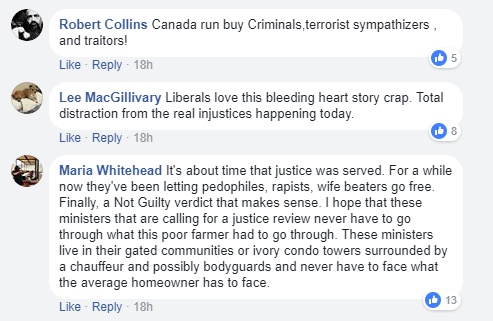 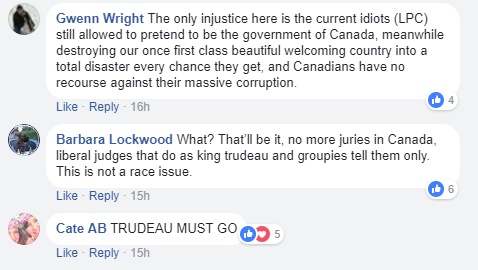 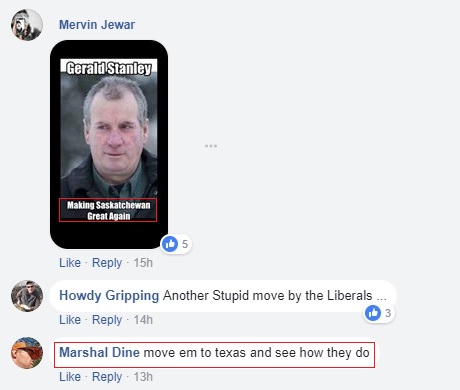 "White privilege does exist and, for me, it will always be defined as having the confidence to stand on second base even when you're out." -Chris Murphy, lawyer for Colten Boushie's family https://t.co/mGJ8Alfhwy
— Garth Mullins (@garthmullins) February 11, 2018

So if the farmer that caught Fildebrandt committing illegal acts like poaching and trespassing on his property had shot Fildebrandt because he was threatened by the shotgun he was carrying, do we really think the farmer would have been found not guilty of killing him? #Boushie
— Brian LaBelle (@brianlabelle) February 10, 2018


As I said, these are representative of the views on the sites ARC monitors. There are some people, a lot of people in fact, in Saskatchewan who are disgusted and ashamed because of this verdict.

I just wish there were more.
Posted by Kurt Phillips at 20:11