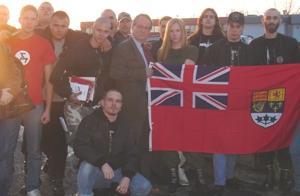 There’s a new group of young folks in Calgary who call themselves “The Aryan Guard.” The name may be a little in-your-face and dramatic, but these folks have acted responsibly staging a peaceful protest against “anti-racists,” leafleting about uncontrolled immigration, and, most recently, protesting against Moslem women being allowed to vote disguised in burkas.

Fifty years ago, these young people would be praised for taking and interest and expressing their views, rather than devoting themselves to partying and hell raising.

Not so! What they get is a stern warning from chief Alberta thought cop Charlach Mackintosh, threatening them: “Although freedom of speech is a treasured part of our Canadian heritage, that freedom does not extend to expressions of hatred, contempt and discrimination against another person or a group. I have a message to those who use the pretext of protesting the legal rights of Muslim women dressed in burkas to vote as a means for promoting racism and religious discrimination - such discrimination is illegal under Alberta's human rights legislation.” (Edmonton Journal, October 23, 2007) --- Paul Fromm (Stormfront: 10-25-2007)

Shall we take a look at this statement in a little more depth?

Fifty years ago, these young people would be praised for taking and interest and expressing their views, rather than devoting themselves to partying and hell raising.


Is Fromm praising nine Aryan Guard members assaulting three customers at a convenience store in the Forestlawn area of Calgary? How about ethnic intimidation on the C Train in the city? Seems like a lot of hell raising to us, and we haven’t even begun writing about the various criminal convictions and charges (incidentally, during the protest that Fromm is writing about, Dallas Price had to scurry away when Kyle McKee was arrested on outstanding warrants because he too had outstanding warrants so it’s nice to see just how respectable these people are). There’s the Aryan Guard sex scandal where a drunken Kyle McKee hooked up with a married woman after he had a fight with his pregnant girlfriend (who was 16 when she became pregnant in the first place). Underage drinking? Sex with underage girls? It doesn’t sound like these are boys we would want around our little girls. An email we received, along with pictures, concerning some members (edited for spelling and grammar):

I’ll just send you the links to the pictures. The girl who’s account this is with the brown hair is in grade 9. She is 14 I think and that guy, Rob, is like 20 or something and then with Dallas who’s, like, well older than us anyways – he’s 19 maybe. Those girls are in grade 9 and they are druggies. [link to picture 1 removed] That guy’s Rob. He’s in that picture with Dallas (the one from the paper) and this is Dallas getting drunk with S*****. [link to picture 2 removed] I don’t know if that’s any help because I don’t know if you want to post pictures of 14 year olds on your site but block out there face or something…. She’s not white power though. She just likes to suck their cocks. Also this guys a skinhead too but I forgot his name. [link to picture 3 removed] He lives in Calgary but he’s in high school I think. For sure Rob and Dallas aren’t [in high school] and Rob is like 20 something. S***** is ************ on ****** if you want to see later if you got more pictures.

And then, of course, there's this: 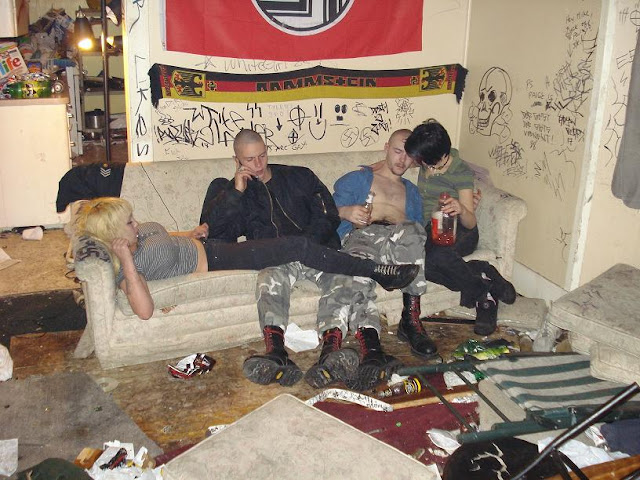 Are these the kinds of people that Paul Fromm wishes to present as being respectable individuals? At best, Fromm is a terrible judge of character. At worst, we’ll leave the reader to determine what that could be.

While we’re on the topic of Paul Fromm and the Aryan Guard, we might as well talk about the term “neo-nazi.” Here’s Fromm’s take on the term:

I don’t consider myself a “White supremacist” or “neo-Nazi.” My followers and supporters are opponents of the Canada’s anti-European immigration policies and supporters of free speech. Paul Fromm (Stormfront: 12-12-2007)

I've met a few older generation National Socialists from Europe and strong believers in Hitler like Terry Tremaine. I've never met anyone, other than trolls or cops, who call themselves "neo-Nazis", or as Farber pronounces it, "not-sees." Actually, I'm told that, even in Europe, the old National Socialists did not like the word Nazi. --- Paul Fromm (Stormfront: 11-13-2007)

Fromm is correct. We’ve never heard of anyone self identifying as a neo-nazi and that includes Fromm’s supporters. What many do identify themselves as, such as Terry Tremaine and Thomas Trenerry, are National Socialists. Nazis. Not “neo” of course. However, unless they were alive prior to and during World War Two and were actually members of Hitler’s movement, they really aren’t Nazis. They belong to a more recent, newer reactionary movement. They’re “new” Nazis. Neo-nazis.

Paul Fromm has said he has never met a neo-nazi. Take a look at the first photo in this article Paul. Let us introduce to real life, sieg heiling, neo-nazis. 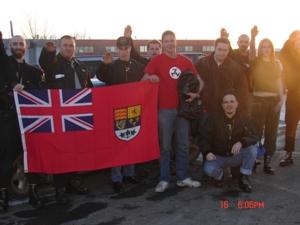