Alternate title 2: "'No Show' Claims to Have Minions"

It is very clear that the WCAI rally that was supposed to be the biggest show on the Canadian white nationalist, white supremacist, Islamophobic, and antisemitic calendar before being cancelled then proceeding (sort of) resulted in such a crushing humiliation (much like the American counterpart yesterday) instead continued to expose the deep personality conflicts between members of groups of this far-right movement. There has been so much fighting prior to and since the failed Toronto rally that it really is hard to know exactly where to start.

Prior to the day of the event, Ronny Cameron posted a lengthy video that was really an extended beef. He attacks the usual suspects: Ron Banerjee, Dan Dubois and the Canadian Combat Coalition (really, such a stupid name), Andrew Scheer, the JDL and Jews in general while promoting various conspiracy theories, and a few others. There was one person who I was genuinely surprised to see him go after because there had been no indication of animosity prior to the video: 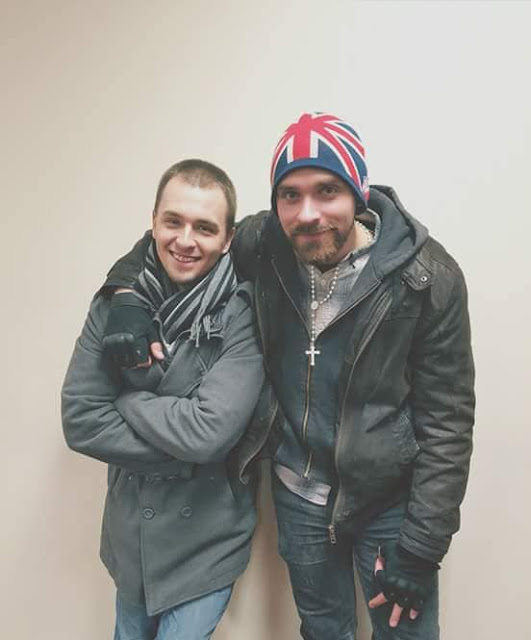 Cameron claims that his issue is with Myatt's ridiculous efforts launch a class action law suit against Justin Trudeau, suing him for treason (because he really thinks that's how it works). ARC has followed Myatt's efforts for a while:


While Cameron is actually correct on ridiculing the law suit effort and questioning the finances, is also seems very clear in the video however is that there might also just a bit of jealousy:

The reason for all this is speculation, but I can't help wonder if part of the problem for Ronny is that he has had so much difficulty as an "influencer" raising money for himself while a lot of people have donated to Myatt's legal efforts despite there being no transparency.

But it is out there now.

After the video, Myatt tried to make a joke out of it all: 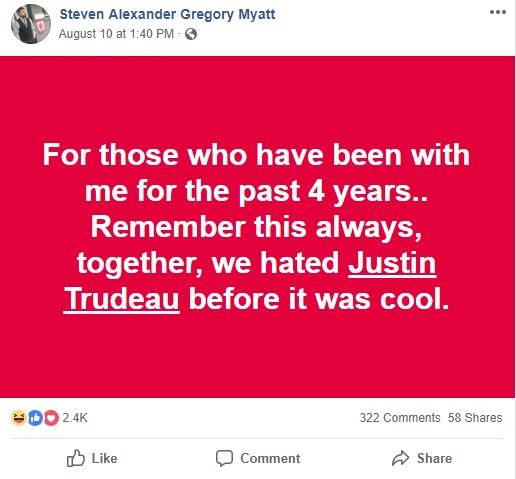 That resulted in this: 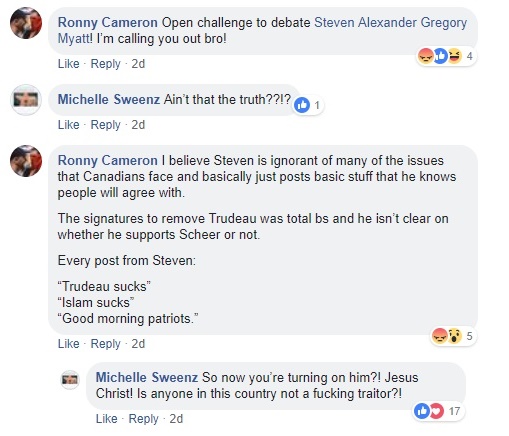 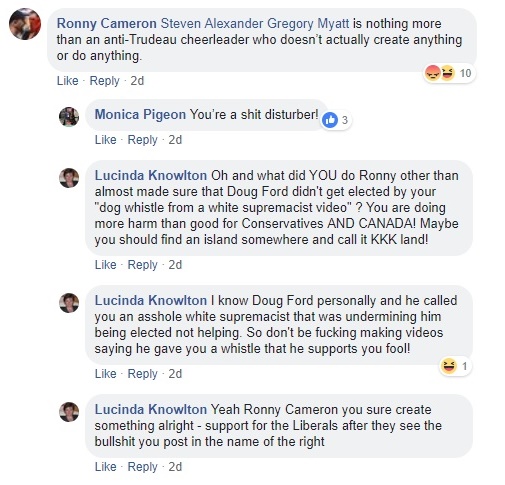 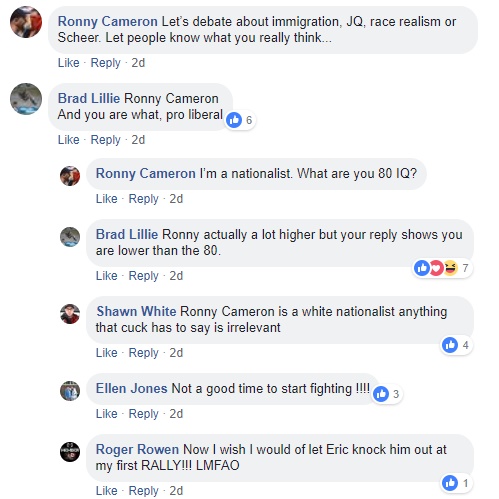 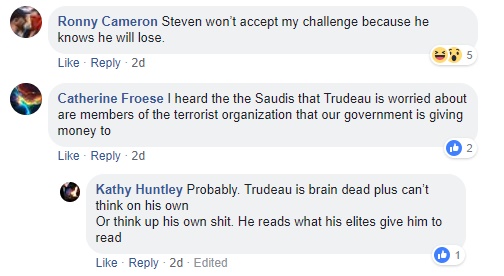 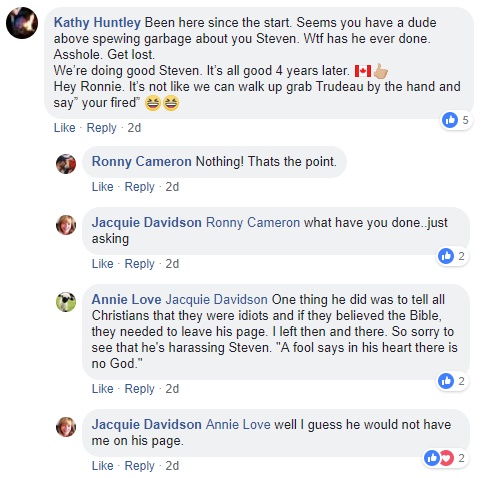 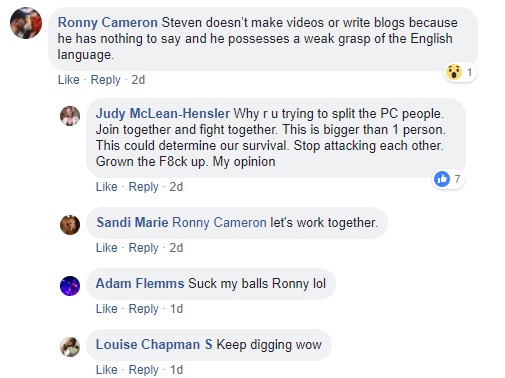 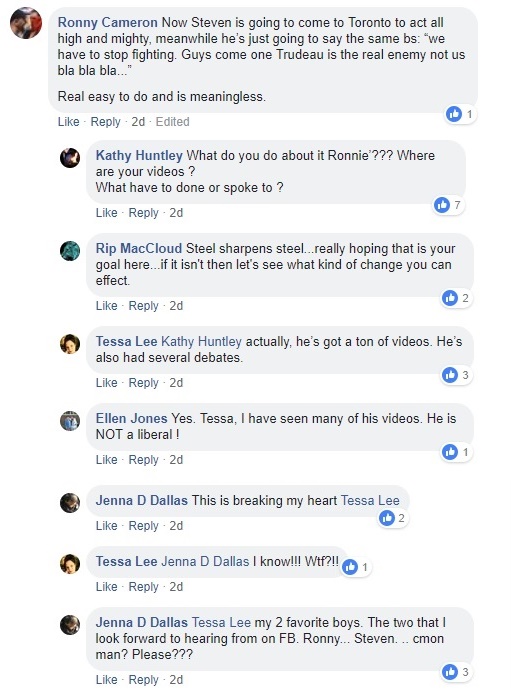 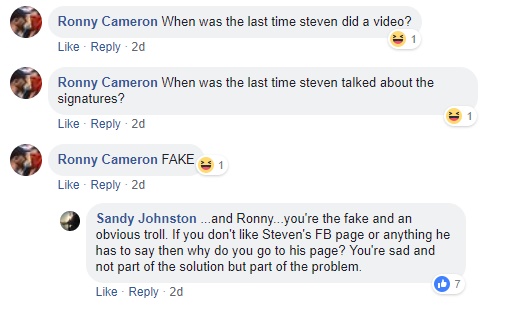 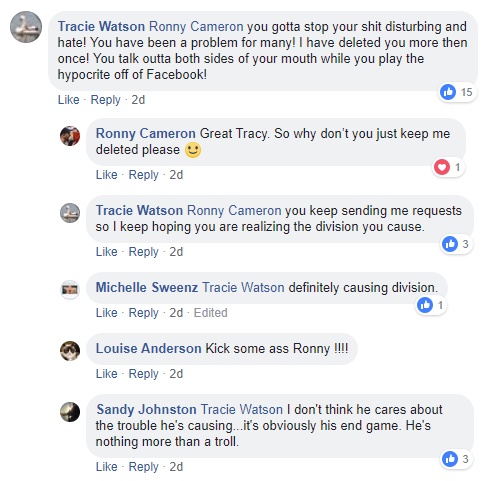 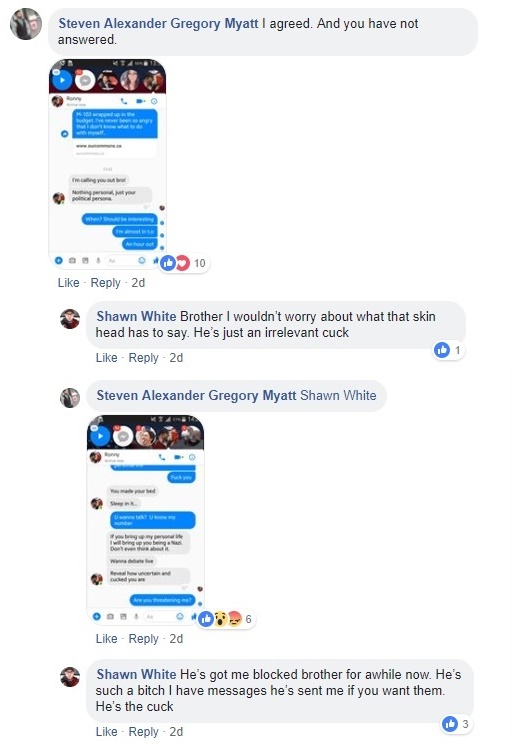 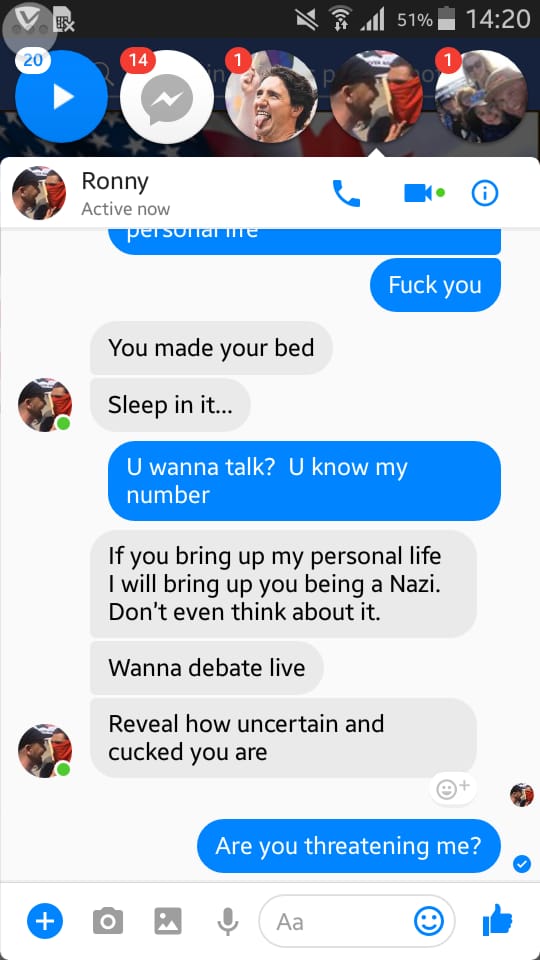 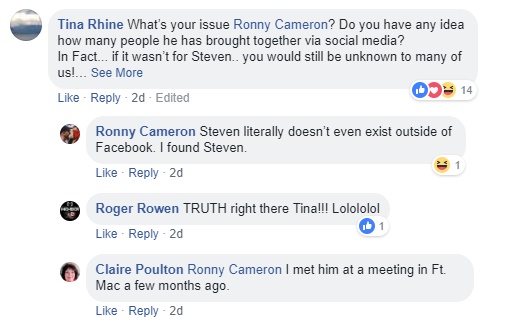 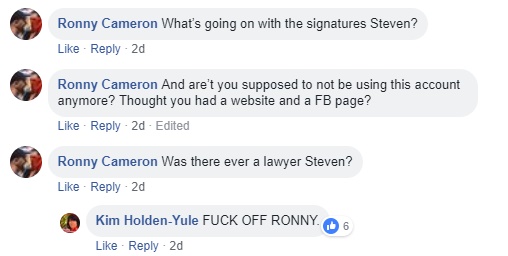 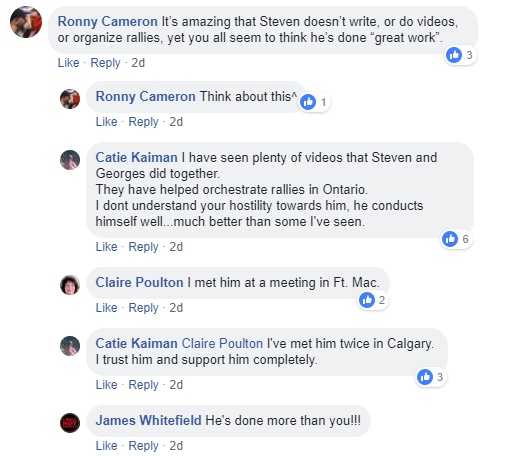 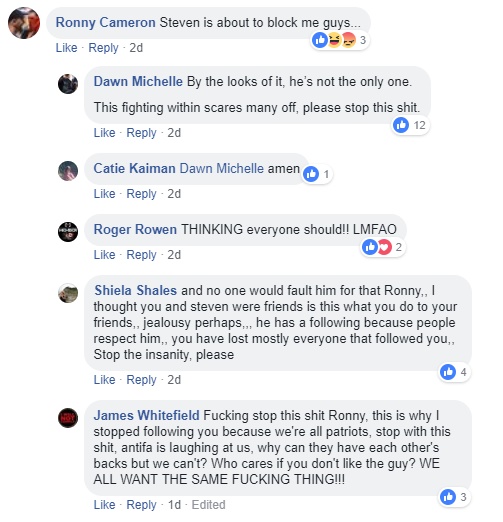 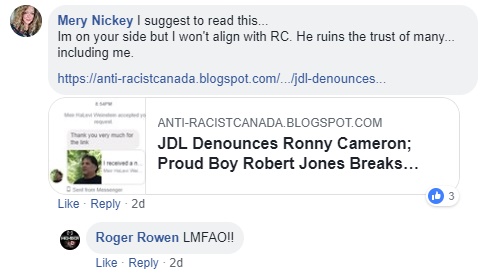 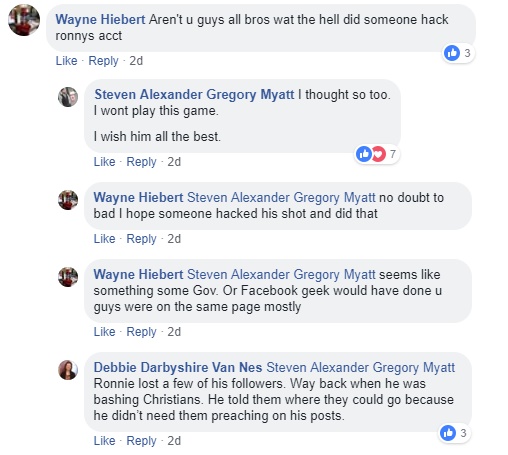 There was of course a great deal more. Most of the people on Myatt's page backed him while those commenting on Cameron's video supported his views. 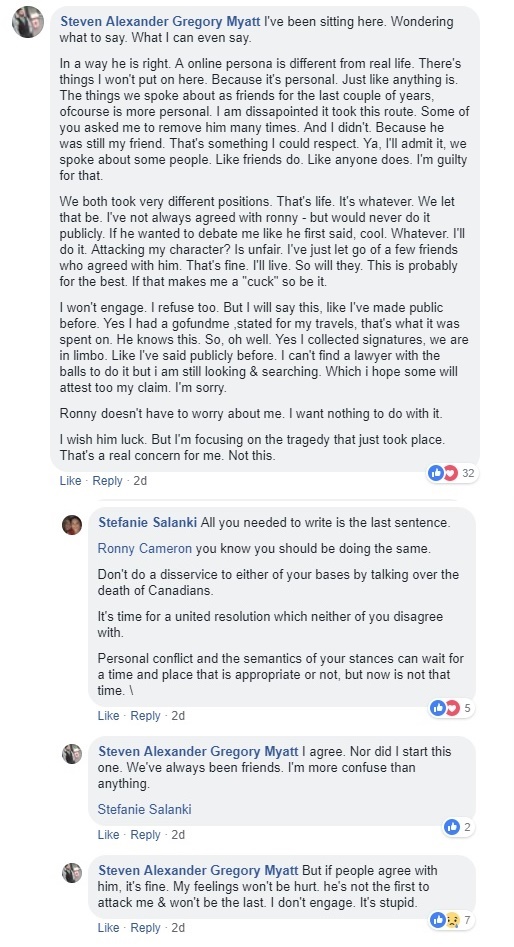 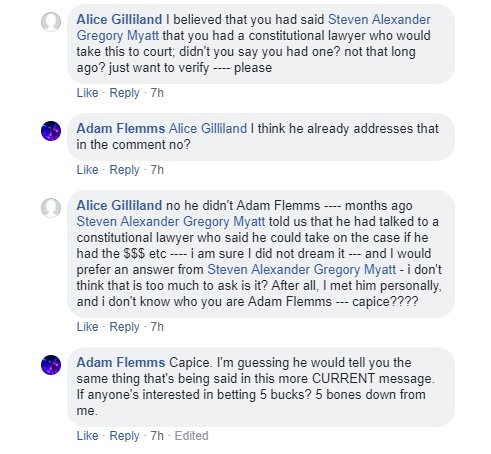 In some ways his promotion of the WCAI Toronto rally was the harbinger of its collapse. I mean, it is hard to claim you aren't a pack of white supremacists when you have a guy with a swazi tattooed on his chest. This was addressed the evening of August 11 when one of the few participants discussed it with Duke Willis:


A drunk, barely coherent, but not yet entirely belligerent Kevin Goudreau then called in and gave a rambling interview (here in two parts):

He posted this soon after his interview with Willis:

And then he posted these: 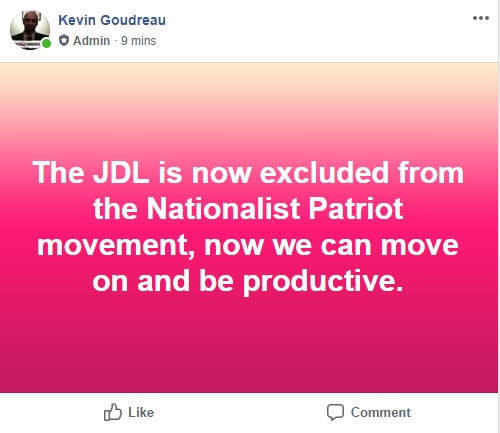 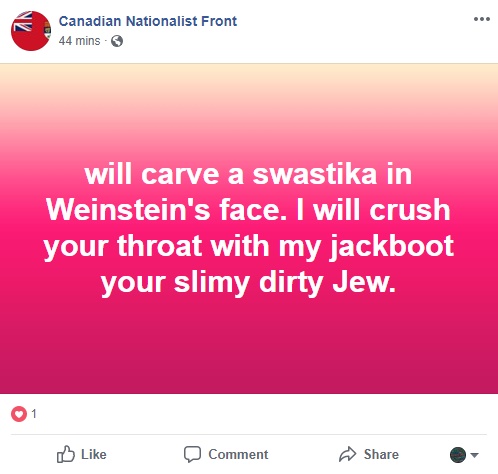 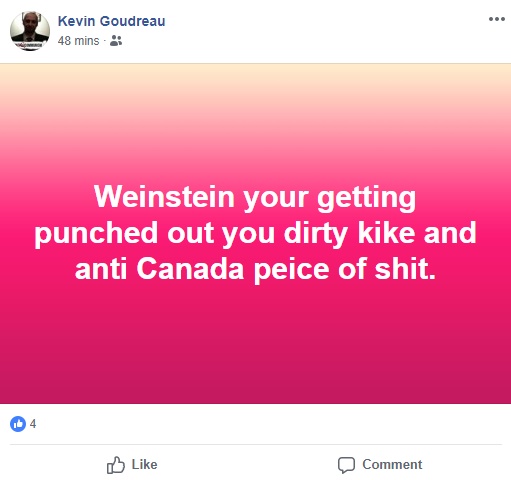 ARC posted these screen shots and the video the evening of August 11 after the rally that "No Show" is upset no one attended but who himself did not show up. They have all subsequently been deleted. The next day though he posted another video wearing an ill-fitted suit because he thinks it makes him look more professional and proceeded to threaten the JDL, Ron Banerjee, a member of the Northern Guard, and others saying that when he sees them next he's going to knock them out since he styles himself as the toughest man in the country.... those who know him well have difficulty holding back their laughter when they listen to Goudreau when he acts tough:


As of this morning, this video too has been deleted, but not before John Marleau (formerly of the Aryan Guard and Blood & Honour in Calgary) and Cory Knowles of the New Brunswich Blood & Honour decided to comment: