Well, we're 20 minutes in right now and here is what we have.

Despite the WCAI cancelling because someone hurt Joey Deluca's feelings, an estimated 500 counter-protesters arrived to show the Islamophobes, antisemites, and racists that they aren't welcome in the city. This photo is from about 10 or 15 minutes prior to the beginning of the rally:


And here is what showed up:

Wow... even if more do show up, what a pathetic scene.

"Fash are here," someone yells, add people drift towards the police cordon. The ppl with the loudspeaker stay put near the stage, intent on having a positive display of solidarity
— neville park (@neville_park) August 11, 2018

It looks like the counter-protesters are enjoying themselves as well:

On the other side, the fascists are feeling a bit uneasy:

I suspect though that the counter-protesters aren't very concerned about Sandra and Ed showing up:

While all of this was going on Sandra, Ed, and the very few other Islamophobes fled into a building because people were saying mean things to them:


And then this happened:

Oh someone else showed up (they were immediately rushed) pic.twitter.com/E956nXWFeM
— neville park (@neville_park) August 11, 2018

They sent the horses through. A cop kicked a guy out of the way, not even sure if they were a protester pic.twitter.com/Er9LK8TwmV
— neville park (@neville_park) August 11, 2018

They use horses because they're like fucking tanks and you WILL get trampled (one person almost did).
— neville park (@neville_park) August 11, 2018

Not for nothing but the #torontopolice on horseback are really good at protecting the city permit office. #Toronto #TOpoli #onpoli #Antifa #WhiteSupremacist #WhiteNationalism #proudboys #neonazis @ARCCollective pic.twitter.com/kkGjXInqRC
— pen_devil (@pen_devil) August 11, 2018

In the meantime, Sandra is having a hissy fit and her fellow Islamophobes are engaging in conspiracy theories while endorsing Faith Goldy for mayor believing that she and Doug Ford have control over Canadian immigration policies.:

There is going to be an interfaith prayer at the corner of the stage, organizers are gathering people to make a protective circle.
— neville park (@neville_park) August 11, 2018


"We want to prove vividly that they are incorrect, that we can stand side by side and value each other, even though we may see the world through very different eyes" pic.twitter.com/NDoyEFNtcL
— neville park (@neville_park) August 11, 2018


People echo the speakers' words, OWS-style. Everyone does their very best with the Arabic (Bismilla rahmani rahim... https://t.co/SrKAZFrKRs)

"Now you're all Muslim" she jokes afterwards. Lols all round pic.twitter.com/izoBeIa1je
— neville park (@neville_park) August 11, 2018

Now we are being led in a version of the Aleynu - sung, partly in English and in Hebrew. Wish I could have transcribed. pic.twitter.com/NcgOt1143f
— neville park (@neville_park) August 11, 2018

As things appear to have settled down, I'm going to go out for a while. If anything happens between now and my return I'll be sure to update the blog.

In the meantime, don't give away the homeworld.

Toronto, Saturday, August 11, 2018 -- Hundreds of anti-racists gathered at Nathan Phillips Square in downtown Toronto in anticipation of a possible far-right racist rally. The Worldwide Coalition Against Islam (WCAI) had publicly promised a large demonstration on the anniversary of the Charlottesville 2017 Unite The Right demonstration which resulted in the killing of anti-racist Heather Heyer by a neo-Nazi protester.

However, due to a combination of infighting and fear of a concerted anti-fascist counter-demo, the WCAI announced a cancellation of their demo. Some of these far-right boneheads wanted to concentrate on hating just Muslims, while others wanted a big tent racist approach, to include open hatred of Jews, refugees and other targeted groups.

More details of the far-right in-fighting is described in these reports by Anti-Racist Canada:


In a blatant lie, the WCAI organizers tried to claim they were simply "postponing" their demonstration due to a Bollywood festival in the square. There was no scheduled festival, although the many South Asian anti-racists present for the demo had a great time speculating about possible anti-racist Bollywood dance routines and song lyrics (all involving Shah Rukh Khan for some reason).

At the high-point of the anti-racist demo, upwards of 300 people had gathered in the square, ready to confront and chase away any racists and Islamophobes who were promising to show up, despite the official cancellation.

There were random far-right people who showed up, in groups of 1 or 2, who were confronted and chased away. And, the publicity-seeking Islamophobe, Sandra Solomon, made literally a 3-second appearance with two supporters, before running away in fear of the protesters.

Dozens of Toronto police, likely over 100, mobilized to protect an empty protest zone intended for the racists who might show up. That did not prevent the police from attacking protesters, including the arrest of at least one comrade, as well as an attempted dispersal by police horses.

Nonetheless, the spirit of the anti-racist protesters -- which included people who traveled from Montreal, Ottawa, Kingston, Hamilton and beyond -- was determined and exuberant. In the past year there have been at least six small far-right gatherings in Toronto's iconic Nathan Phillips Square (always confronted by anti-racists) and today's anti-racist mobilization was widely acknowledged to be the largest so far.

Today's protest in Toronto was also a tangible gesture of solidarity and support for anti-racist/anti-fascist comrades mobilizing in both Charlottesville and Washington this weekend against the racist alt-right. 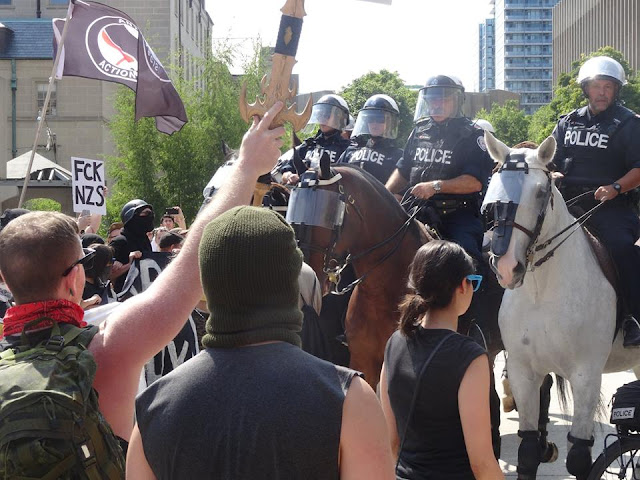 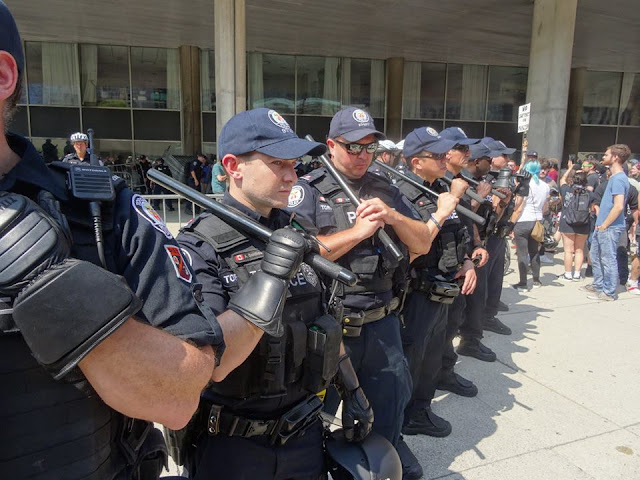 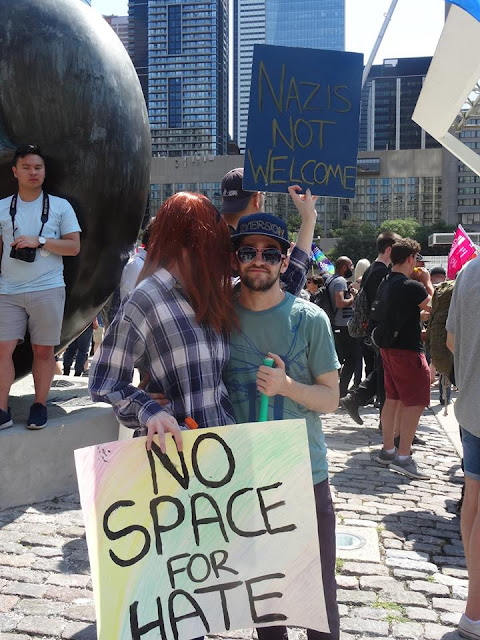 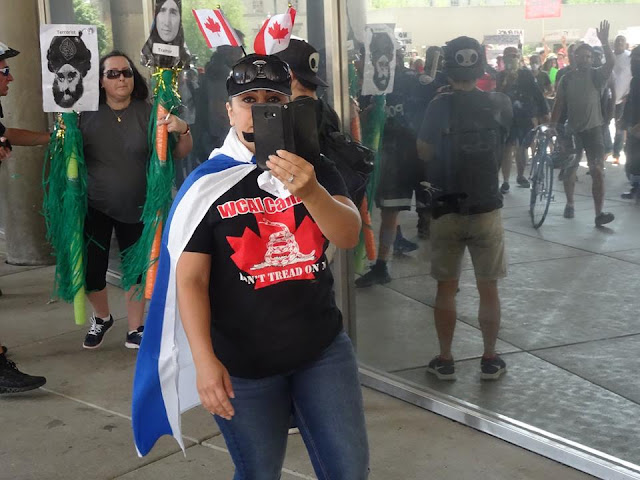 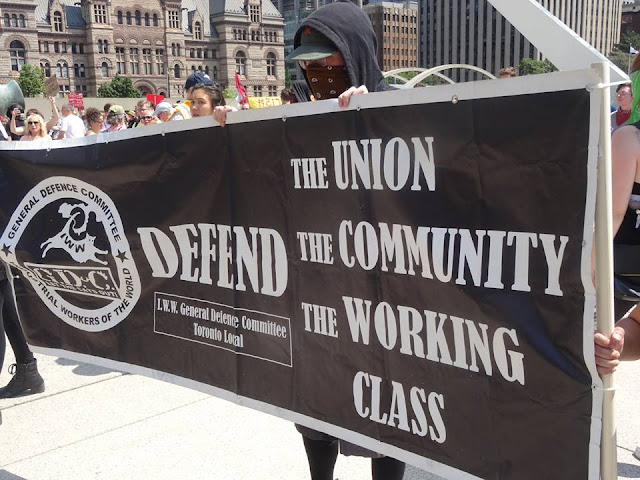 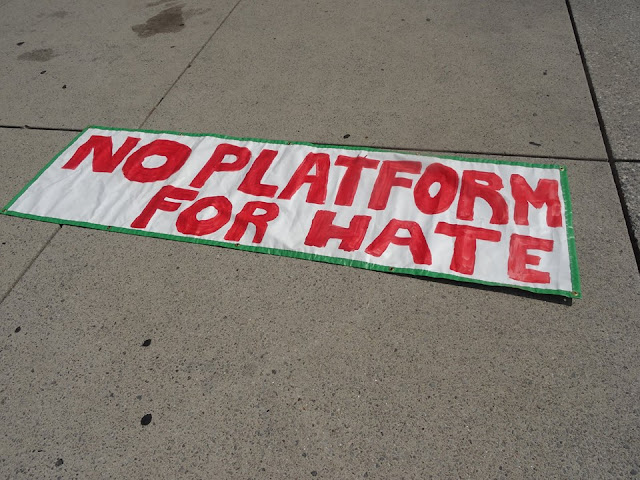 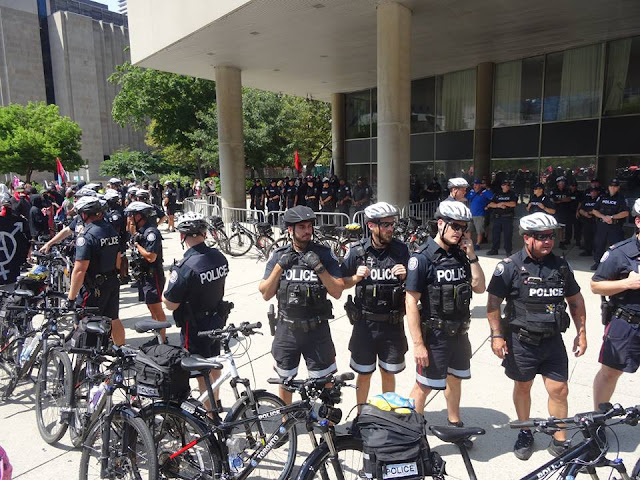 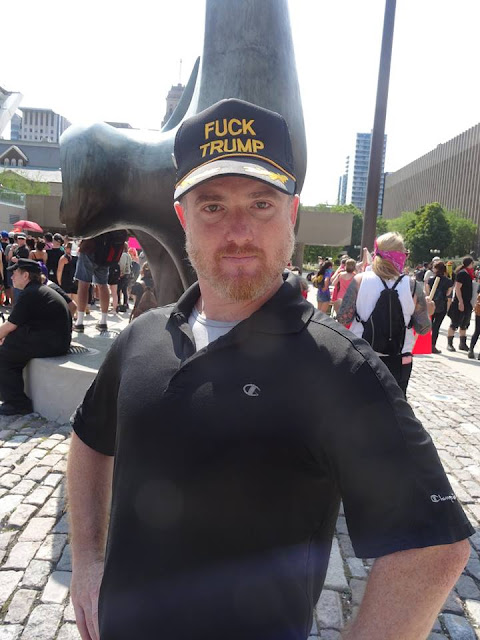 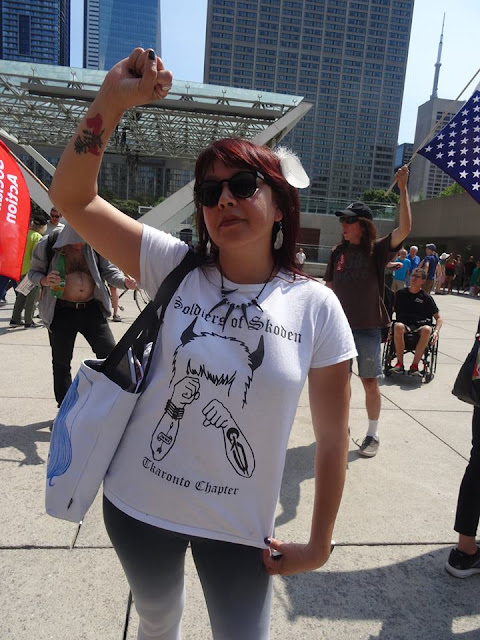 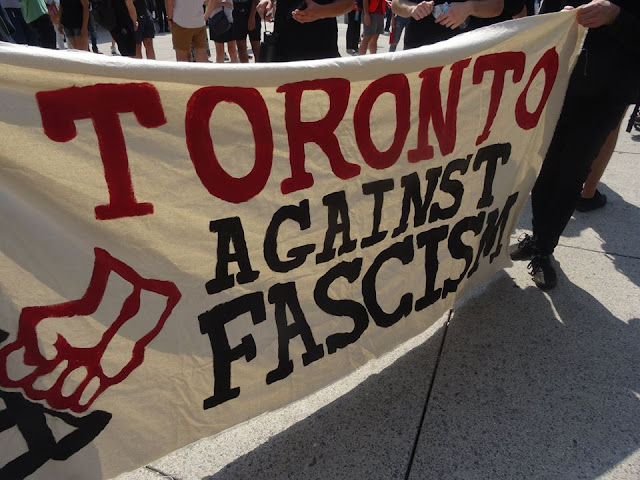 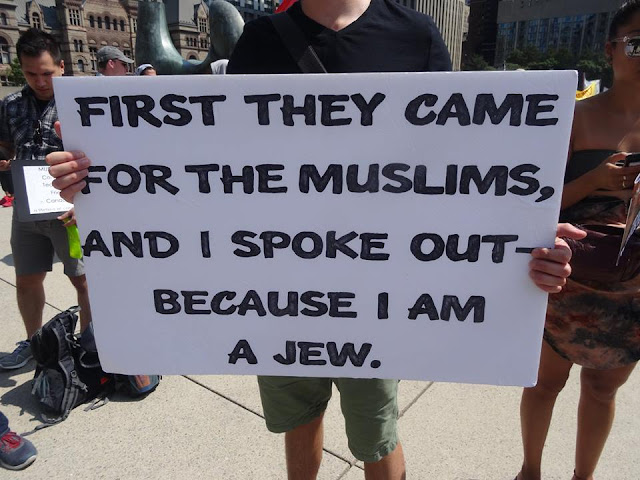 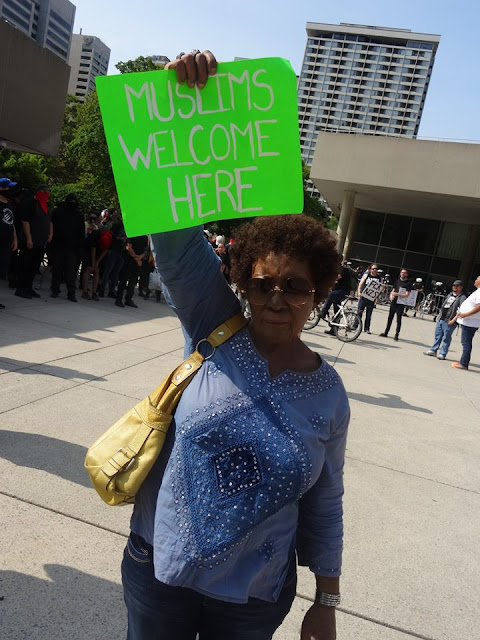 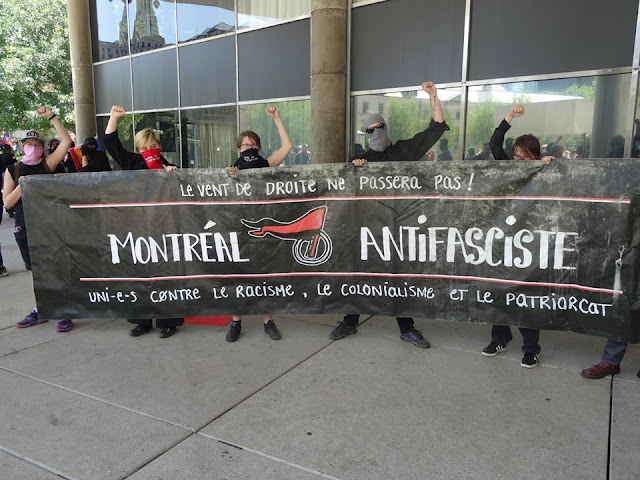 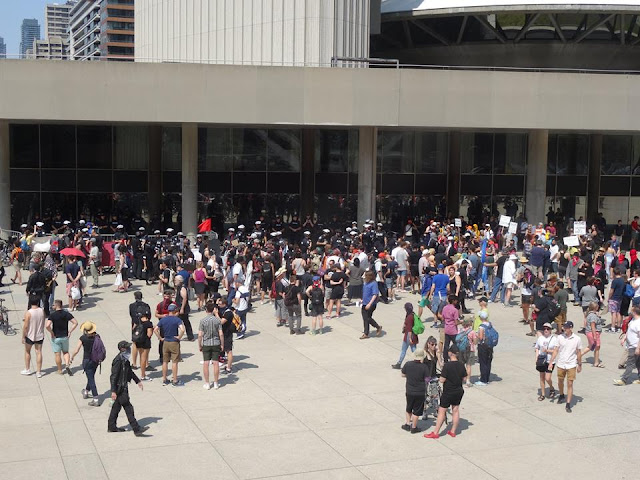 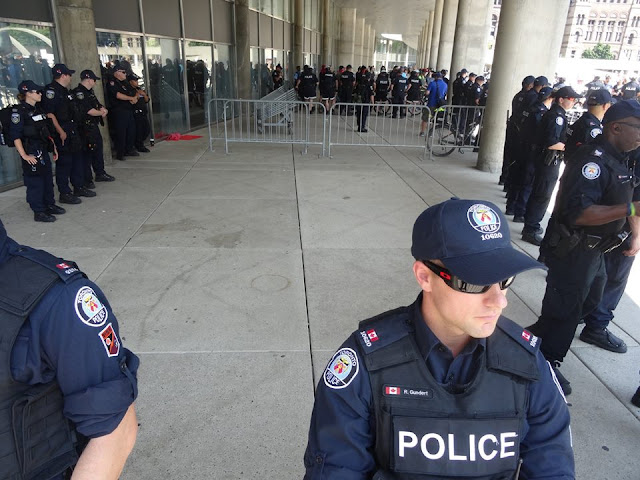 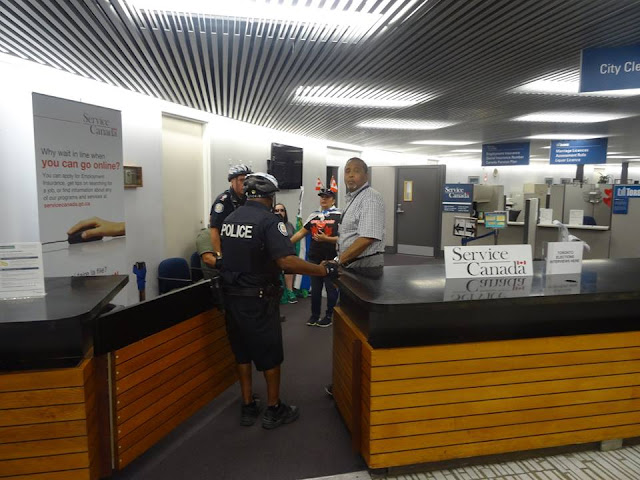 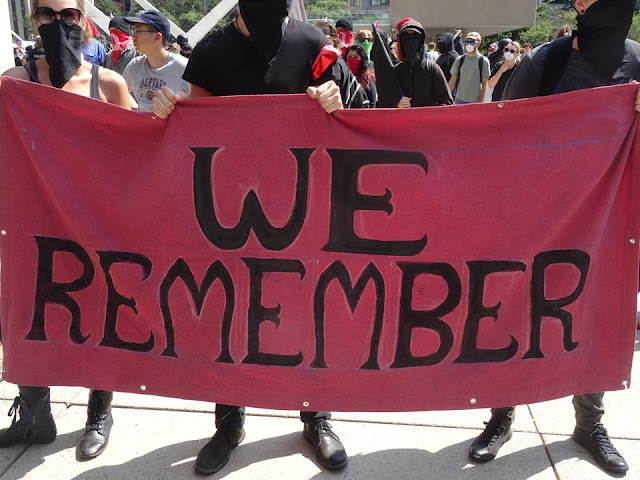 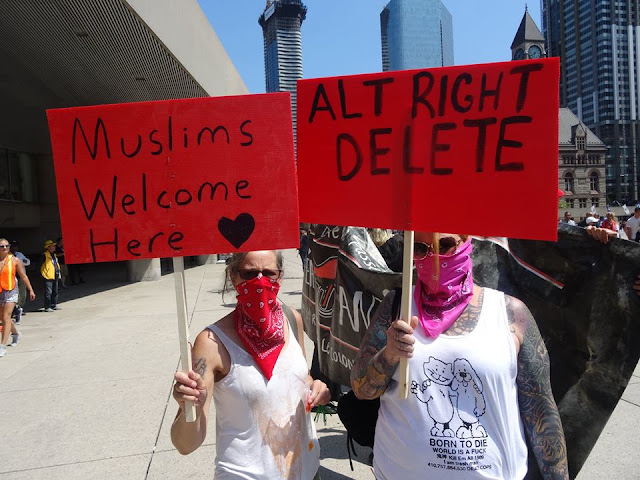 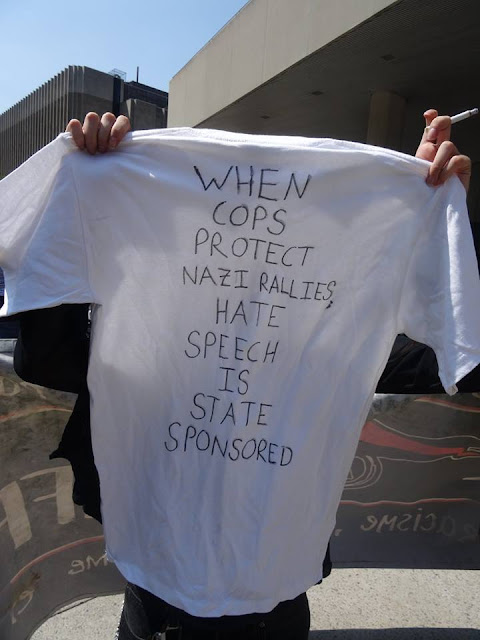 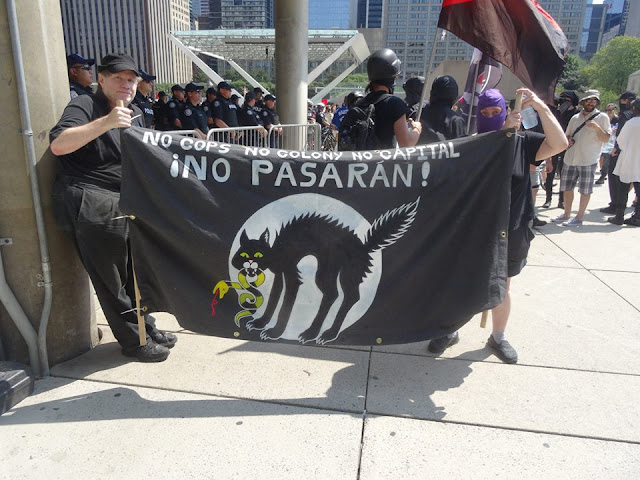 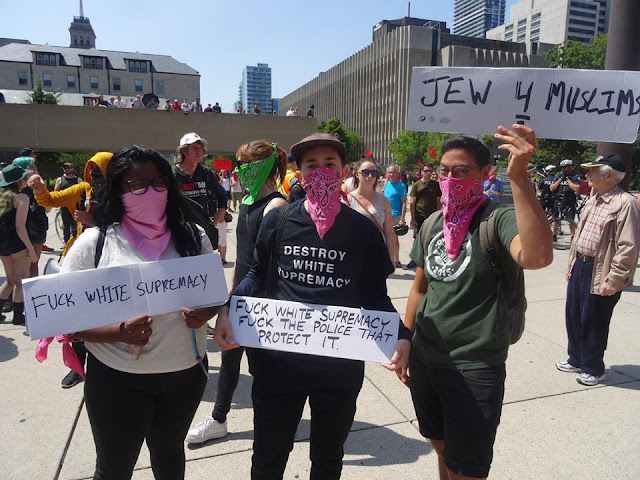 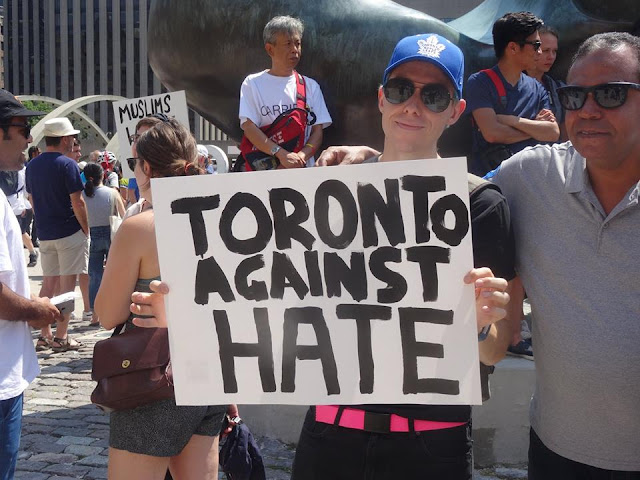 UPDATE 2: Evidently Sandra Solomon's group wasn't the only one that showed up. This guy for example:

Less than a handful of fascist demonstrators did show up independent from Solomon's group and were surrounded and shouted down by antifascists. One of them wore a shirt saying "Krakow" and looks like this. pic.twitter.com/AGt5u8lc7E
— Steven Zhou (@stevenzzhou) August 11, 2018

A suspected provocateur, who kept getting in people's faces, riiight under the cops' noses. pic.twitter.com/lDBh9ZuWDn
— Liam Toshio Morris (@Liam_Tosh) August 11, 2018


We later learned what might be the name of this person:


However they were just as ineffective as Solomon.
Posted by Nosferatu200 at 12:32

Gotta love that Sandra's like "I'm wearing my Isreali flag! I'm not a Nazi!" then pans to her newfound friend beside her (at about 1:56 into the hissy fit video) who says "We gotta vote them out! Vote out all of the Je...uh...Liberals! Vote Conservative!"