So, do you all remember when the Soldiers of Odin tried to intimidate homeless people in Nanaimo but were outnumbered significantly by people opposing them? At the time, the SoO claimed that they were merely providing "security" and that their intentions were not violent or confrontational.

Today they decided to dispense with that pretense:

A Soldiers of Odin group in Nanaimo, B. C., is threatening to clear a homeless encampment by force this weekend pic.twitter.com/MITpzKOVtT
— James Keller (@ByJamesKeller) August 17, 2018

The Facebook group page appears to have been deleted since the news of the SoO plans have emerged.

The suggestion regarding child sex trafficking is interesting; I'm not certain if they are suggesting that the people in the camp are guilty of or victims of trafficking (in general vulnerable people are far more likely to be the victims of crimes, sometimes committed against them by people who society might consider "good" because they aren't homeless). The claim may be true, or it may simply be a justification to do something that the SoO wants to do anyways. The problem is that groups such as the SoO always seem to use the specter of "child trafficking" or "pedophile rings controlled by powerful people" to make their potential lawlessness seem noble. We've seen this with the Pizzagate conspiracy and the more recent QAnon craziness that is being disseminated online. It can be traced back at least as far as the satanic ritual abuse panic of the 1980s and early 90s that resulted in a number of false allegations that put a lot of innocent people in prison for a time and which, perhaps not coincidentally, coincided with the rise of the religious rights whose members believed in a literal heaven and hell and that the forces of darkness were temporally active.

The point is that these folks seems to be especially credulous when it comes to conspiracy theories.

Speaking of which, here's the latest from "Beau" Welling of the Alberta III% militia: 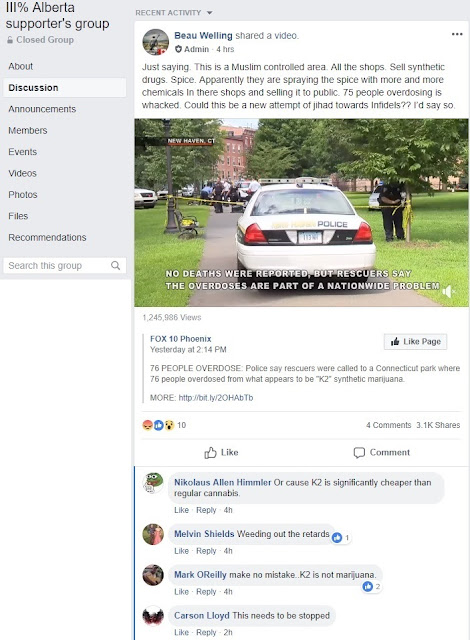 I looked up demographics for New Haven, Connecticut where the story originated. I have no idea where Welling came up with the idea that the overdoses occurred in a "Muslim controlled area" but given what I was able to find, I might have to question his claim: 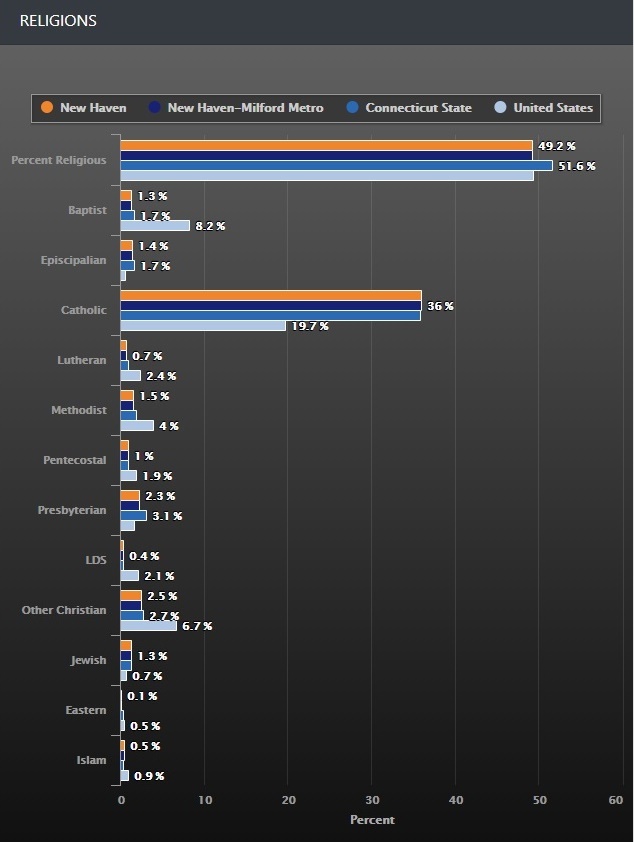 What Welling is claiming is one of the newer Islamophobic conspiracy theories that has started finding a home on far-right social media; "Muslims" are behind the opioid crisis. Basically we're at the point where if something bad happens, Muslims are being blamed. I've pointed out in the past that the Fort Mac forest fire was, and still is, being claimed as a Jihadist conspiracy. The current crop of forest and prairie fires are being offered as definitive proof that Muslims are attacking the country: 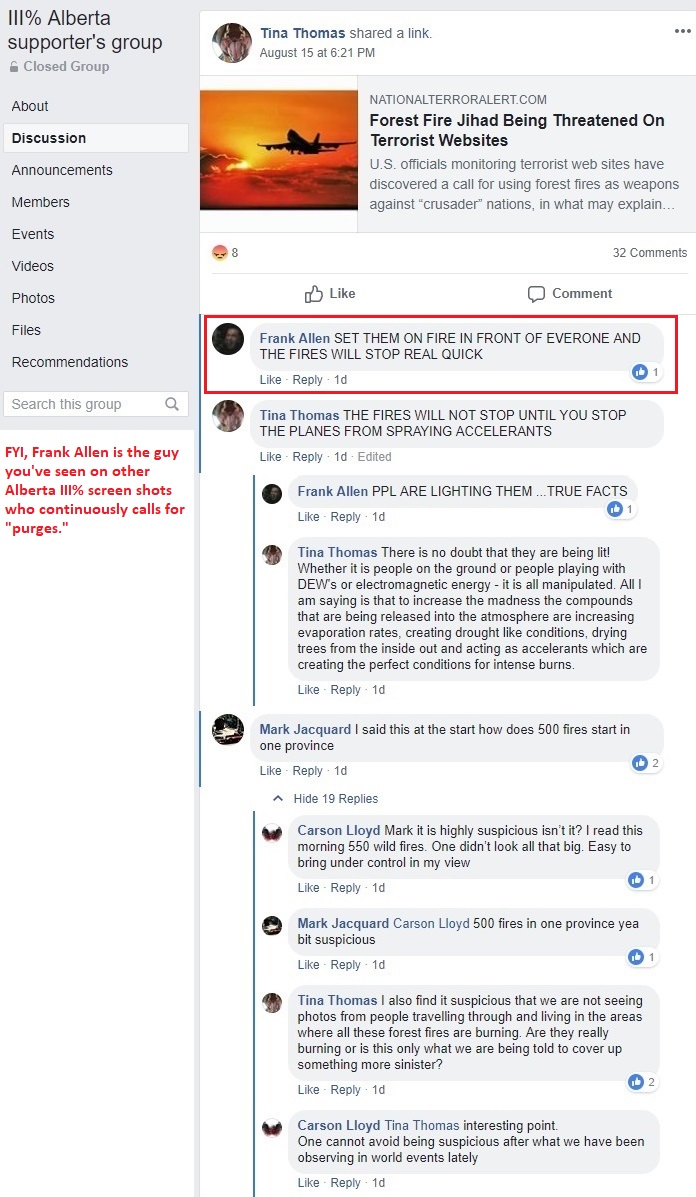 It's funny. When presented with evidence that the increase in fires is in part the result of climate change based on the research of climate scientists and that such fires had been predicted to increase in frequency and intensity decades ago, these people will ignore that evidence and claim that it is some sort of wealth redistribution conspiracy, the scientists are corrupt, or something else along these lines. They would much rather believe that the fires are a result of Jihadists working with the NWO and using H.A.A.R.P to control the weather in order to take away their guns.... or something along those lines.

Of course, there is a sliver of truth in that while a lot are started by natural occurrences, many of these fires are started by people. Most of those are not nefarious per se (the largest fire in California was started as a result of sparks from a flat tire), however a number of them are started through negligence; ignoring fire bans, driving ATVs on dry trails, not fully putting out camp fires, or perhaps throwing cigarette butts out a car window. There are also legitimate examples of arson that occurs. In fact, one of those accused of starting one forest fire appears to be a proponent of the QAnon conspiracy. That all being said, there is no evidence that groups of Jihadists are traveling around the continent dropping fires like a pyromaniac Johnny Appleseed.

Then again, evidence isn't really important. It's the "feeling" that is crucial and if you feel hatred towards another people, then all sorts of things become justified.

That's why it is becoming increasingly difficult to laugh at conspiracy theorists when those unfounded conspiracies are serving to radicalize more of them: 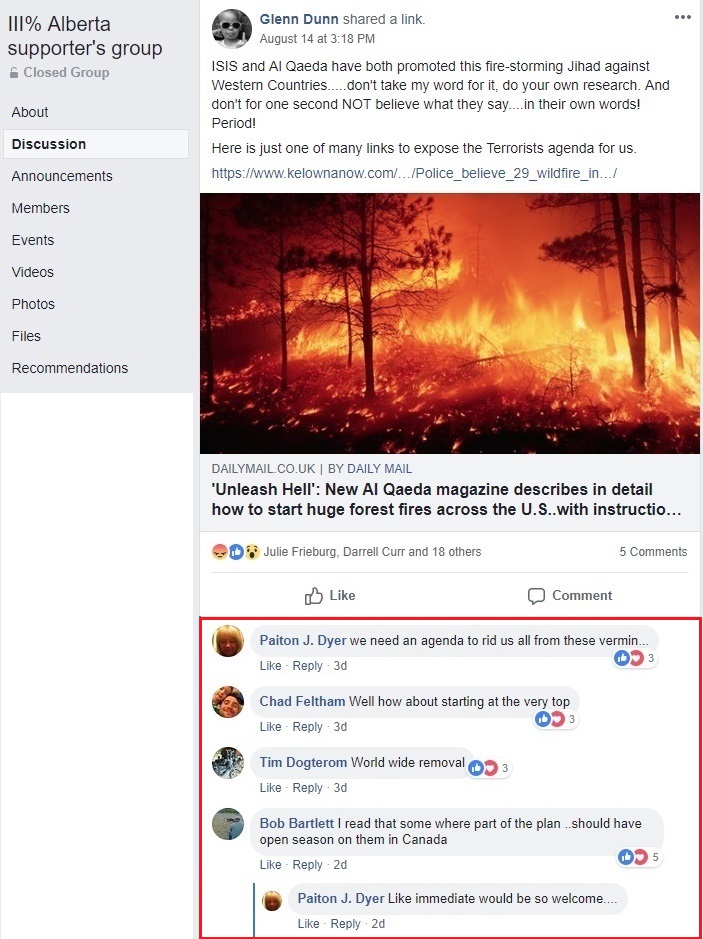 Beau, that lard brained threeper thinks everything is a Muslim conspiracy. What is really scary, is he is the brightest of the bunch.