It has been a busy day as ARC has learned from Paul Fromm that Arthur Topham has been arrested: 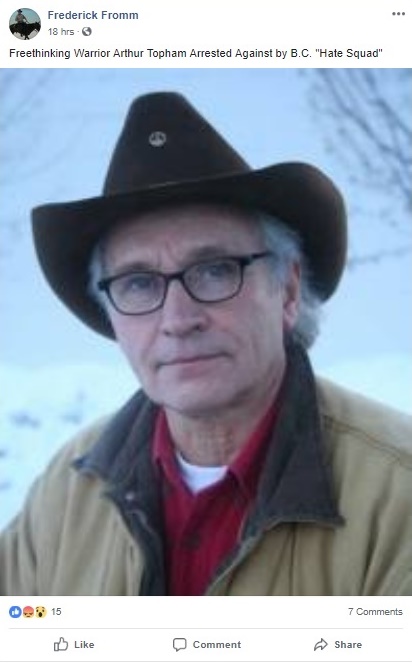 Topham was prosecuted and convicted for promoting hate online back in November 2015. He eventually launched a Charter challenge in 2016 however he lost his appeal and was sentenced on March 13:


A B.C. man convicted of an anti-semitic hate crime has been kicked off the internet, but Arthur Topham won't serve any jail time.

Following a trial in Quesnel in 2015, a jury convicted Topham of one count of communicating online statements that wilfully promoted hatred against Jewish people.

He could have faced up to two years in jail.

According to Paulie who wrote the following on his blog, Topham was taken into custody this past Monday:


The thought police’s campaign to silence Arthur Topham entirely ratcheted up a notch this past Monday. Returning with his wife Shasta from his placer mining claims, August 6, Arthur was arrested outside his rural property near Quesnel, British Columbia. His wife who is severely disabled was made to stay in a camper outside their home., Arthur was taken to the town jail, until a warrant arrived for the police to enter his property. “They absconded with my computers and flash drives,” the former publisher of Radical Press (until 2009 a tabloid and then a website) told CAFE in an exclusive interview tonight.

Arthur faces a charge of breach of probation. Having been convicted in 2016 on one count of violating Canada’s notorious “hate law” — Sec. 319 of the Criminal Code — and acquitted on another, Mr. Topham was given a six months suspended sentence and two years prohibition of publishing anything critical of Jews on the Internet. He heads to court on October 16. Without his computers, Mr. Topham has gone silent on the Internet. 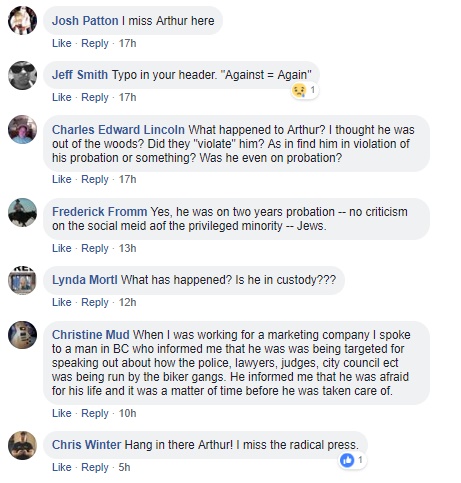 It's been a bad week for Islamophobes and antisemites.
Posted by Nosferatu200 at 19:12