Originally scheduled for March 10, Arthur Topham's sentencing was moved to tomorrow. In the meantime, Topham has been in preparation advising folks that he would be taking down his website and that anyone wishing to do so should take the time to collect as much information from it as possible.

Rather than being humbled or even mildly apologetic, Topham is still the nasty old antisemite he was before the whole house came crashing down on him, though to be fair we never once expected any form of contrition: 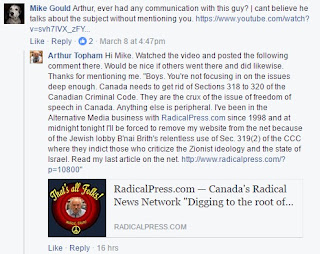 That last part is of some interest. Since the previous government stripped Section 13 from the Human Rights Act, it has been more of a challenge dealing with online bigots, however the Criminal Code statutes regarding Hate Crimes still exist, albeit infrequently enforced. Paulie himself stated that the next target should the elimination of Sec. 318, 319, and 320 of the Criminal Code. Topham, one of the few in recent years who was tried under the Hate Crimes statute, is keen to end those statutes as well:

In other news, while Topham is soon to be sentenced, Freeman con artist and former Stormfront member who was for years in correspondence with a neo-Nazi Dean Clifford has been released from prison after having served approximately 14 months of his three year sentence. This likely takes into account the time he served prior to his sentencing. 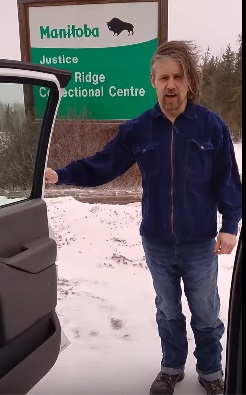 This is a.... well.... it's a new look for the Wolverdean. Less "faux rugged jack of all trades, rebel with a cause", and more "hobo without a shotgun due to lifetime weapons ban imposed by the Crown."

We suspect that Clifford will be chafe under the requirement of answering to a parole officer and will be under some pretty strict conditions during said parole, though this is speculation on my part. Also speculation is that he plans on picking up right where he left off because #winning and even more #winning:

Taking bets. Is Clifford going to admit to his gullible followers that he was released because, like most criminals in Canada, he had served 1/3 of his sentence, or claim that his Freeman hocus pocus forced the Crown's hand, thus proving him correct all along?