McKee was released from detention in Regina shortly before May 26 (he was sighted at that time with Natalie S. near the University of Calgary). On June 1, Robert Reitmeier and Tyler Sturrup of the hated rival WEB were arrested for murder, one in which an investigation had been going on for months with no outward indication that it was going anywhere (though we do suspect that the police were building a strong case anyways). The subsequent destruction of WEB as a result of these arrests sure wouldn't be mourned by members of the Aryan Guard/Blood & Honour/Combat 18/ATB(?)/Oprah's Book Club/Westminster Kennel Club/Miss Georgia World, would it?

We're not saying anything, though we do find the timing to be especially interesting.

But now on to the reason for writing today.

Keeping in mind that a person is innocent unless proven to be guilty, it didn't come as a great surprise to learn that WEB founders Robert Reitmeier and Tyler Sturrup were arrested on murder charges. Certainly the two men were not strangers to violence (Reitmeier had been charged with attempted murder in 2006 and was shot by Roland Warwa in 2008 while Sturrup was the target of an attempted murder in the November IED attack), but the attraction to violence appears to be more pathological and not necessarily connected to his
racist views, though these tendencies do serve to make the manifestation of their racism far more dangerous to the general public.

Reitmeier's attraction to violence was evident on his Facebook profile where he routinely posted misogynistic "jokes" about assaulting and killing women, usually meeting with the approval of his Facebook friends. Before his last profile was deleted by the Facebook administrators, Reitmeier also had an album containing pictures of people who had been killed (some in terrible accidents and others murdered) in horrific ways or which celebrated the actions of the killers. One was struck by the callous nature of the jokes he was making concerning the mangled and bloodied bodies as well as the laudatory tone of his comments on those accused of terrible crimes.

At the time, we did take one screen shot, though we didn't publish it as it didn't fit any story we were working on at the time. Given recent events however it seems appropriate now. In this picture, Reitmeier and others comment approvingly of the actions of the Columbine killers (Reitmeier is posting as "Rivet Rob"): 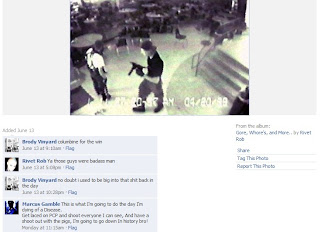 Marcus Gamble is also an associate of WEB.

Regardless of whether or not Reitmeier was involved in the death of Mark Mariani, and even if he didn't hold the racist views that he does, his attraction to violence and towards those who engage in it are indications of a rather disturbed mind.

If anything good can be said to come of a murder (and that is a stretch), it might be that the courts are now taking this threat seriously. Or so we hope:

Marcus Gamble is a pathetic drugged out scrawny kid who used to give himself tattoos with cigarrets when we was rejected from tattoo parlors. He's a stupid burnout to the point where even the Nazis wouldn't have accepted him to their youth brigades. WEB is the only group dumb enough to accept him. He's an embarrassment to the white race, let alone the human race. Even for the nazi cause, he's better off dying in a hole somewhere by himself, maybe taking his burnout girlfriend with him. This guy's lot too many brain cells to even be considered sane anymore. He belongs in an infirmary....ironically, the nazis themselves would have executed this individual.

There should be a rally to support the family or at least some of us should go sit in on the court date to show we will not stand for the boneheads and their violence!

If anyone sits back and really analyzes the WN/WP movement and things said by, thought by, ideas acted upon, etc, by them it's impossible to come to any other conclusion than that their existence as a social idea revolves around violence, negativity, death, conflict, genocide, oppression, etc. The WN/WP movement has created for itself a culture revolving around death and death worship - from the "martyrs" of days past to present. It can be seen in their idols, their ancestor worship, folk heroes, and even what some would consider the lowest of the totem pole - skinheads.

Sure, no doubt, they act as though this isn't the case and throw around words such as "preservation", "freedom", "culture", etc but the addiction to sociopathic ideas and tendencies in everything one can watch, read, or listen to thats WN / WP related is glaringly obvious.

They want civilization restored - yet by and large none of them have the creative or motivational ability to know what is or think or even ACT civilized.

They want freedom - but that freedom would for the most part only be secured by removing the rights and freedoms of others.

They believe "nature" is selective - but yet can't accept the fact that nature isn't governable by logic and that the tide of nature has for now moved against their interests.

Their love of death and its worship has been their undoing since time immemorial and it will continually be their undoing.

To deny this is to deny the sun rises in the east and sets in the west.

I find what's most disappointing about the WN/WP movements adherents is that many of them get so wrapped up and leave for themselves no other options. Somewhat akin to having a tiger by the tail. Many of them are motivated to change the world (albeit for the worse, of course) and their ambitions would be so much more put to good use if their dedication wasn't so encapsulated by hatred, ignorance, apathy, etc. Many of them could be a force for good - but alas, somewhere along the line their feelings went astray due to whatever forces are beyond reasonable control. It's unfortunate, it's sad, and it's depressing to see life wasted in such endeavors. But, I suppose - and this is up for debate by many people - but not by me *wink* - that God's logic works in ways we will never understand, in opposites, in hurtful times, events, conflicts, beliefs, etc.

Hopefully, in time, the death addicts and the violent prone will realize the value in human life. In the case of the two above murder suspects - it looks as though they will have many, many, many long years to consider this.

This can be said of all races, ideological movements, etc.

LMAO!
Not that you should really worry because he's useless and more than likely retarded from his drinking and getting his head beaten in for running his stupid mouth, but "Brody Vinyard" (who is going by Brody O'Connor on fb right now) is ACTUALLY a loser named Brody Townsend..
He's a ginger kid with no life and thinks he's hardcore and a wanna be skinhead..

Looks like anyone who is in part of WN or WP gorps just use it as an excuse to be a bunch of sick fucks their is no differences between them and some asshole who shoots up a play ground.

One thing that has always enraged me about neo-nazis is their claims that they are "superior" and that "Nazism still lives. What they fail to explain in a satisfactory manner, is why are they generally unemployable and either working low-end jobs or on welfare, being white trash and accomplishing the sum of zero with their lives (Craig Cobb comes to mind), and why their oh-so-great ideology is now only found on a small group of fringe ruffians like themselves, and why most people are repulsed by it. I can only figure that the illusion of strength and victimhood is the only things they have going for them, and they are damned if they are going to give them up.

In addition, the original Nazis were huge fans of death, destruction, torture and mass murder, so not much change here with the riff raff who admire a regime that barely lasted 12 years and both committed and aided and abetted some of the worst crimes in human history.

Does anyone know the identity of the bonehead that was recently in the news for being raped in a Calgary jail?

This is a fairly old article, but Dustyn Johnson, noted in the picture, is now living in Regina, Sask.

Marcus Gamble is scheduled for court today May 2/14. He will attempt to claim his innocence in the June 2013 sever beating of this at the time girlfriend.

Dustin is now back in Regina Sask. Working as a roofer.