Revisionism: It Ain't Just For the Holocaust (Part II)

We sort of get a kick out of how boneheads try to change historical realities when they become inconvenient.

The German Occupation of Greece began in April 1941 after a the Italians had been defeated by the Greek army in October 1940. The resulting occupation led to the death of some 300,000 civilians in the Greater Athens area alone due to the famine caused in large part by the German requisitioning of food for the war effort. Not surprisingly, the Greeks who are fiercely independent were not at all fond of an occupying force controlling their country. Many men a women became partisans and engaged in a campaign of harassment and guerrilla-style warfare in an effort to try and force the Germans to leave. As a result, the Germans engaged in reprisal killings of unarmed civilians. Kommeno, Viannos, Kedros, Distomo, and Kalavryta are names that are burned into the collective memory of the Greek people.

On May 29, 2011, Stephen Harper (someone for whom most of the Collective have little love for) visited Kalavryta to pay homage to the people murdered by the Nazis. He was the first foreign head of government to visit the village and, regardless of what we think of Harper, it's hard for anyone to be critical of his gesture.

That is, unless, you're Paul Fromm who sees Harper's visit to Kalavryta as a nefarious attempt to curry favor with Israel. Because, you know, that makes perfect sense: 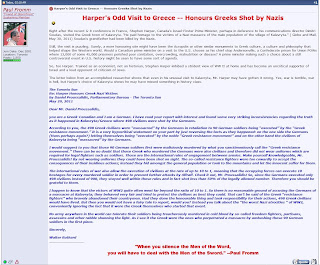 Had Paulie stopped at his own rant then it really wouldn't have been unusual and perhaps not even worth publishing on this blog. However, as one can read, he didn't stop at his own rant and instead included a letter from an "accomplished researcher" who provides one of the most bizarre revisionist histories that we have ever read online. There is SOOO much that one can focus on, but this little bit really made the jaw drop:


The international rules of war also allow the execution of civilians at the rate of up to 10 to 1, meaning that the occupying forces can execute 10 hostages for every murdered soldier in order to prevent further attacks by riffraff. Check it out, Mr. Proussalidis! So, since the Germans executed only 498 civilians instead of 900, they stayed well within those rules and in fact shot less than 50% of the legally allowed number. Therefore you should be grateful to them.

I happen to know that the victors of WW2 quite often went far beyond the ratio of 10 to 1. So there is no reasonable ground of accusing the Germans of a massacre at Kalavryta; they behaved very fair and tried to protect the civilians as best they could. That can’t be said of the Greek “resistance fighters” who bravely abandoned their countrymen. Had they done the honourable thing and took responsibility for their actions, 498 Greek civilians would have lived. But then you would not have a fairy tale to report, would you? Instead you talk about the “the worst Nazi atrocities “ of WW2, conveniently ignoring the fact that it were the Greek themselves who started that event.

No army anywhere in the world can tolerate their soldiers being treacherously murdered in cold blood by so-called freedom fighters, partisans, assassins and other rabble shunning the light. As I see it the Greek were the ones who perpetrated a massacre by ambushing those 90 German soldiers in the first place.
Yep. You read that. And he's actually serious.... we think.

It's funny how Paulie is so smug when he posted this, this, well.... this. Who needs a lesson in history? Paulie best stick to English (though we've seen how utterly he fails there as well).

Let's take a look at this, "accomplished researcher." It's interesting to note that Paulie, who is prone to handing out lofty titles (he's Canada's foremost free speech advocate and an immigration expert, dontchaknow?) can't even bring himself to call Walter Ruthard an historian. Only a researcher. When one Google's Ruthard's name, what one sees are his numerous posts wistfully remembering the Reich of his youth. That said, it seems fairly clear that Ruthard is a researcher in the sense that he knows how to cut and paste and post to webforums.

But more to the point. In what world does Paulie actually believe that soldiers are legally permitted to kill civilians in retaliation for the death of soldiers at the hands of partisans or guerrillas? Did he not actually bother to look this up before he posted it on Stormfront or his own Facebook profile?

You see, unlike Paulie, we do try to get our facts straight. As such, we contacted a friend who really IS an accomplished researcher. Who works for the UN in Europe. And is going to be attending law school in the field of international law.

After our friend stopped laughing at Ruthard's claims, this is what was kindly sent to us:

Paulie could have done the same, but then the truth wouldn't have fit the narrative he's trying to create.
Posted by Nosferatu200 at 17:50

In the interests of fairness it should be pointed out that most of the protections afforded to civilians you have cited came into being with the 1949 Geneva Conventions and not before. Thus many of the rules listed that are a part of international law today did not exist during World War 2 except as basic morality.

That said Mr Fromm's "prominent researcher" has his head firmly planted between his buttocks. There have never been guidelines allowing ratios of how many civilians can be killed for each soldier killed by irregular forces. Even the most cursory search on the interwebs turns this up.

Reprisals were allowed under international law prior to 1949 but only as punitive actions against another sovereign state who had broken international law. If you're occupying a country they cease to be sovereign. Thus the occupying nation loses any legitimate claim to armed reprisal as a response. Additionally at least two sections of the Hague Convention (S.46 and S.50) prohibit such reprisals and were used as the basis for prosecutions at Nuremberg. Even revisionist history sites like Furtherglory accept this as fact.

I don't know why Mr Fromm would be using an individual who's stance would be disputed by other historical revisionists as his intellectual back-up. Not exactly doing wonders for his credibility there.

Two minor corrections. Firstly it's Section 4 that of the Hague Convention of 1907 that contains the statutes used at Nuremberg, they're actually Articles 46 and 50, not actual sections. Secondly, in order to avoid accusations of twisting words Mr Fromm does not refer to Mr Ruthard as a "prominent researcher" but rather as an "accomplished researcher". He is accomplished at getting basic facts utterly wrong (ie his assertion that a 10:1 ratio of killing civilians as reprisal was enshrined anywhere in international convention) so I guess that description isn't totally wrong.

Fromm is such an idiot. Even a double facepalm can't express the amount of fail in his claims.

I also love how he "blames the victims" for the massacres, a common tactic used by racists, and then tries to make Nazi Germany the victim by claiming that they were fighting back.