"He Who Will Not Be Named" Bravely Takes Swipe At WN Detractors. Once They Can't Respond

We tried not to talk about him. We mean we tried really, really hard. But when you're given gold like this, how could we not share it with our readers?

Yes, Kevin Goudreau is at it again.

After being the subject of a great deal of mockery here and elsewhere, Goudreau disappeared for a few months. Perhaps he was in jail? Or in a mental health facility (again)? Or maybe he was engaged in planning the electoral conquest of the Canadian government and installing himself as the Canadian Führer (two of these scenarios, incidentally, are more likely than a third... try to guess which one that would be)? The long and the short of it though is that Goudreau had slinked off with his tail between his legs and hadn't posted on Stormfront for some time.

During the time he was gone, many of the people who had been having so much fun at his expense appear to be no longer members of Stormfront (in the case of Shawn Macdonald who, along with another Blood & Honour associate, seem to have had their accounts inactivated we presume at their request) or are currently otherwise indisposed (as in the case of Robert Reitmeier, for reasons obvious to our readers). Others just seem to be inactive and no longer participants on the racist forum.

So of course with this in mind Goudreau has returned to bravely give these ne'er-do-well a piece of his mind.... now that they can't respond: 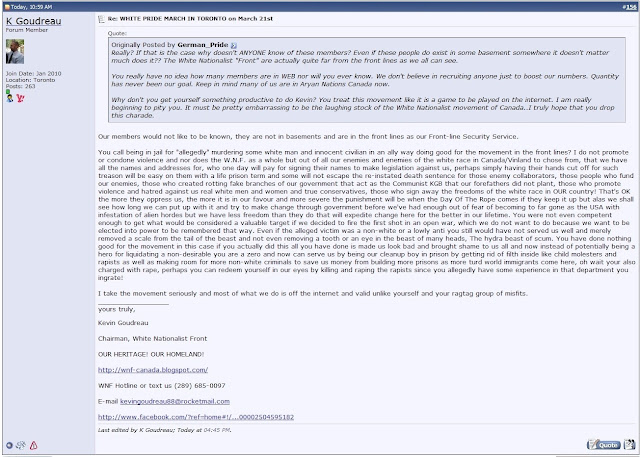 See! How could we not give this to you? It's a stream of consciousness that manages to out Dec Francis E. Dec himself!


Oh, we were foolish to believe that we could quit Kevin Goudreau cold turkey.

Does anyone know if there's a patch that might work for us?
Posted by Nosferatu200 at 21:32

I've always wondered if he's high on crack or some other hard drug when he decides to talk. There is no such thing as the WNF and he used to think he was Der Fuhrer and his girlfriend at the time, Eva Braun.

oh my goodness gracious what the fuck is wrong with him??

I see the boneheads have had the Canadian Red Ensign up for the past few days. Are they marking Canada Day by using Our old Flag?

I personal find their use of Our old Flag offensive. It is a part of Canada's Heritage and should belong to all Canadians.

The history of Our Flag is not compatible with their Confederate Rag, Celtic Cross Rag or their White Pride Rag. It is a disgrace to every thing that Canada is, when they use Our Flag.

Our Flag must be ripped from their hands, removed from their poles and torn from their jackets. Figuratively, because we are better than them.

We Must Reclaim Our old Flag before it degenerates further into a symbol of their hate.

Adopt The Canadian Red Ensign as a Anti-fascist symbol! Reclaim Our old Flag for all Canadians!

The Red Ensign is a reference to a time before the Canadian Charter of Right and Freedoms were created and Canada's link the Europe.

It's also the flag under which a lot of good men killed a lot of bad Nazis. Those good men who are still alive are likely pissed as hell that boneheads have claimed that flag as their own and, knowing some of those old soldiers as we do, would still be able to kick the shit out of said boneheads.

But to a lot of Canadians, that flag, with its Union Jack in the corner, is a symbol of racism. Italian, German and Japanese Canadians were interned under that flag, and don't even get me started on what that flag means to Quebeckers. Let's leave it in the past where it belongs, with other unfortunate relics of British imperialism. Canada has changed for the better, and so has its flag.