We had heard rumors for a number of months now concerning the murder of Mark Mariani but didn't have anything concrete. Today, however, two of the founders of the Aryan Guard offshoot WEB, Robert Reitmeier and Tyler Sturrup, were arrested for his murder:

Police say two people were taken into custody in the death of Mark Mariani, a 47-year-old who was attacked in an alley in the 1500 block of 16th Avenue N.W. in October of 2010.

The men's names have not been released because no charges have been laid yet.


Police say one was arrested in Edmonton and another in Calgary on Tuesday.

Earlier this month, police filmed a Crime Stoppers re-enactment of the killing and said they were searching for more witnesses.


At the time, they said they had three suspects who were in the area at the time of the death. 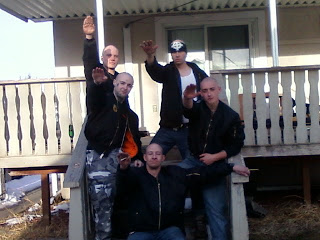 Sturrup and his then girlfriend were the victims of an attempted murder in November 2009. Kyle McKee, the founder of the Aryan Guard, was arrested after fleeing from the police. Attempted murder were dropped eventually though McKee did plead to lesser charges, including possession of bomb making materials.

We will update as information becomes available.

UPDATE 1: The msm have named Reitmeier and Sturrup, as well as their affiliation with WEB, in one of the more recent updates. WEB is called a, "white pride group" however, thus further white-washing (pun somewhat intended) the beliefs of groups such as WEB. They have never been about pride. The hatred and violence is their raison d'etre

UPDATE 2: Jason Devine was contacted for information in the previous article. The "Herald" still makes an error, stating that WEB was one of two racist groups in the city. In fact, there are three active groups we are aware of: WEB, the Aryan Guard/Blood & Honour/Combat 18, and Volksfront Alberta.

UPDATE 3: Some of their former friends, including John Marleau, have also started adding their $0.02 in the comments section of the "Sun" article.

UPDATE 4: According ton the CBC article, Reitmeier and Sturrup will be making a court appearance in June 8.
Posted by Kurt Phillips at 12:54

Holy shit! I'm sure you'll see this eventually but FYI this article has more details and pictures: http://www.calgaryherald.com/life/arrested+year+Calgary+murder+photos/4874133/story.html

it's this sort of headline that totally casts aside the "oh they are just harmless boneheads" argument...

RIP, WEB, we hardly knew ya.

Are they locals or did they arrive in Alta from somewhere else?

Reitmeier is basically a local. Sturrup is originally from Ontario. Likely Hamilton.

Lol look how scared rob is. Guess he was fresh out of alcohol courage.

Yes Sturrup is from Hamilton.

I might not be in Volksfront anymore, but don't attach VF to bullshit like this as this type of activity is not something they would condone.

Rob's baby was born this afternoon..

Sure, VF has never made threats, attacked, or done worse to anyone. Riiiiiiiight.

Fuck your goof ass click "anonymous" Your VF bitches are behind anything if its not a white victim. So dont say there not "condoning this shit" cause you know thats a lie and all you w.p goofs can eat a dick