Terry Tremaine is Appealing (Actually, CHRT is Appealing. Note Update. Then Point and Laugh At Us).

Well, not really appealing. In fact he's not at all attractive.

See what we did there? Funny? Eh? EH?

Bah! We long for the Golden Age of Comedy when a good knock-knock joke would delight theatres and all the great USO Shows Bob Hope was a part of!

Anyways, Tremaine is appealing the CHRT decision it would appear. 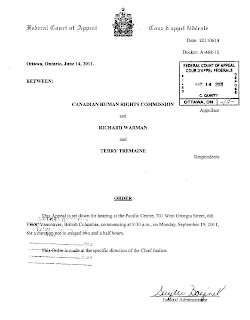 UPDATE: Hey, you know what would have been cool when we first published this article? If we had actually read it more carefully.

"Terry Tremaine is appealing"
- Well, now we all know your secret fetish lol :P. Sorry, I couldn't help it.

(said whilst pointing as per your request)

And very much deserved, Davegeek. ;)