It has been a while since ARC has discussed the seemingly marginally employed transient Steven Myatt, and I don't plan on going into a lot of detail. He's now living in Calgary and has unsurprisingly hooked up with local extremists, including the reactionary Yellow Vest protesters. Yesterday he posted the following urgent declaration: 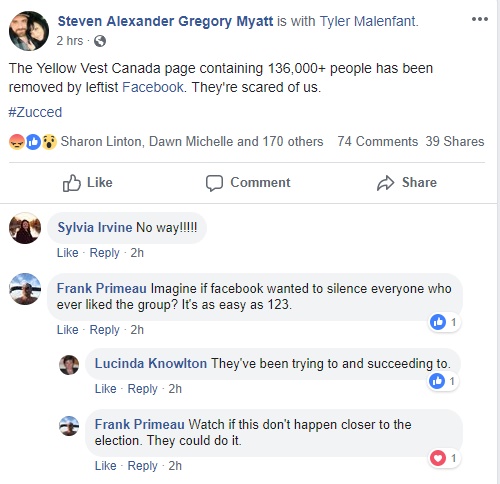 Scared? Well, perhaps but not exactly in the way that he might want to believe.

The Yellow Vesters have been the subject of numerous stories in the media of late focusing on the racism of much of the membership as well as the calls to violence:


Here are a few of the more tepid examples: 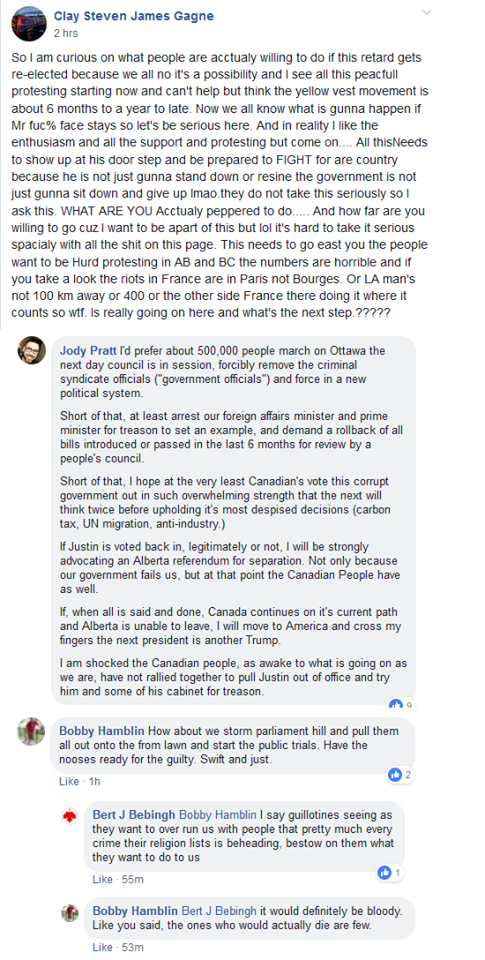 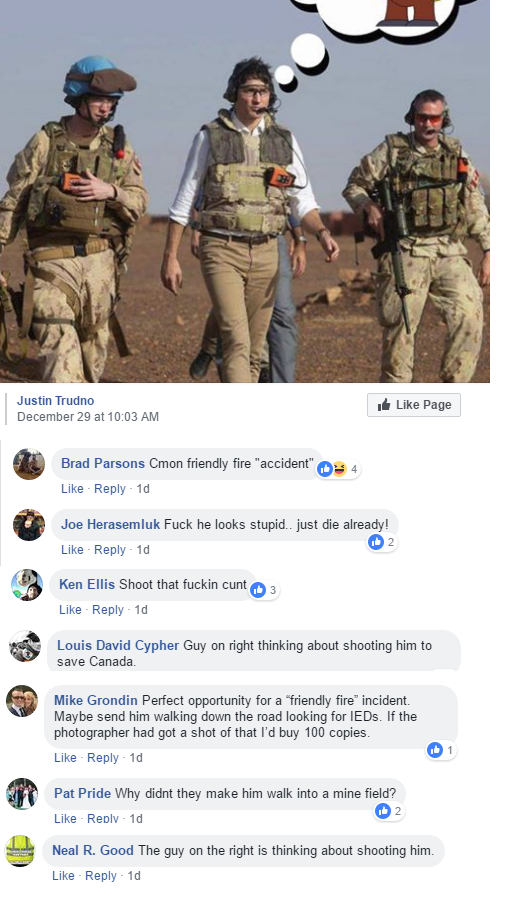 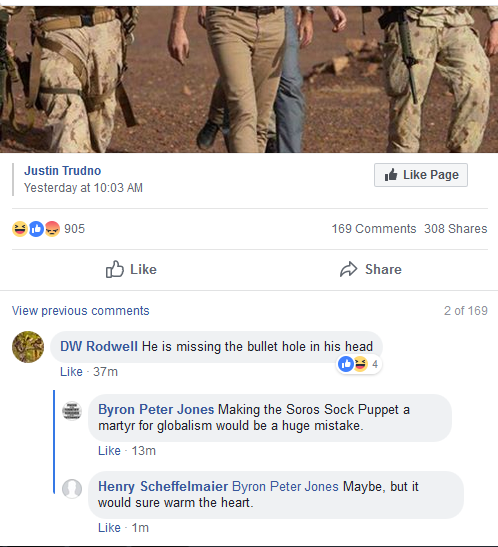 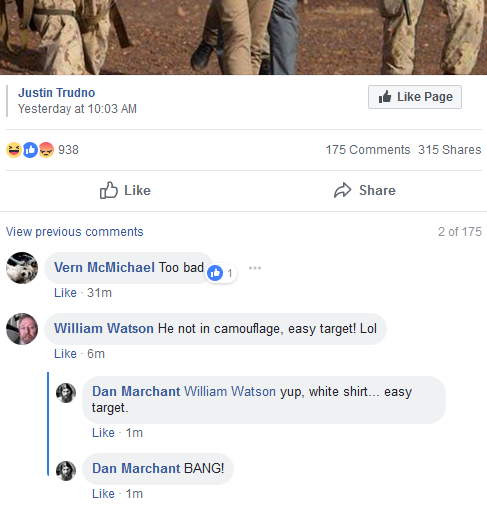 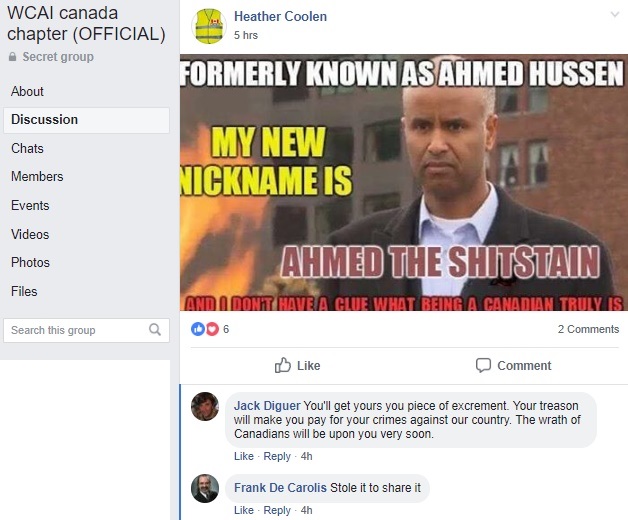 I could post a lot more, but I really think readers should (if they haven't already) check out Yellow Vests Canada Exposed which has been doing an incredible job of cataloging the ugliness from the various Yellow Vests Facebook groups that have sprung up in the country:


They certainly have the bad guys spooked: 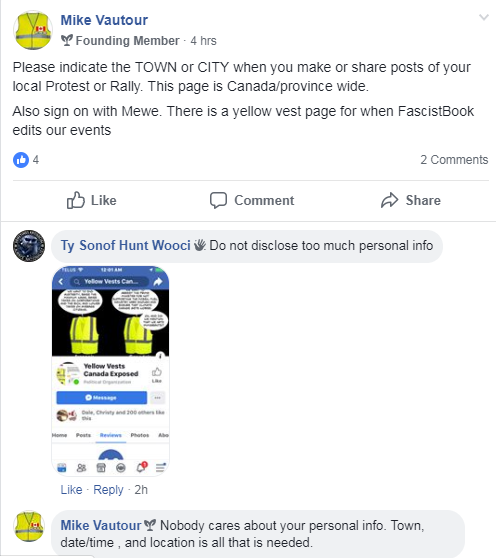 In any case getting back to Myatt, the reaction was as one would have expected: 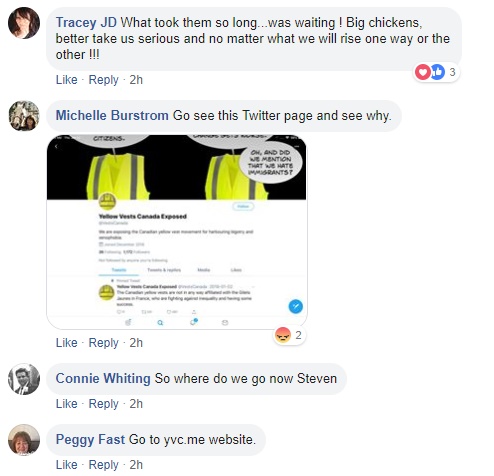 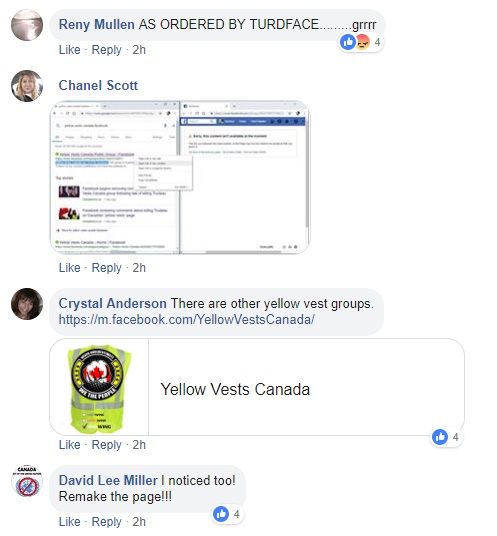 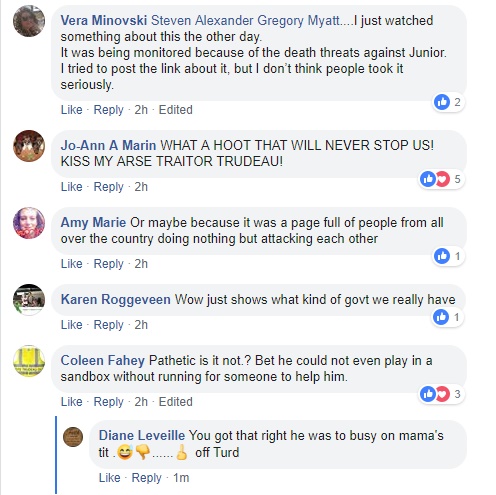 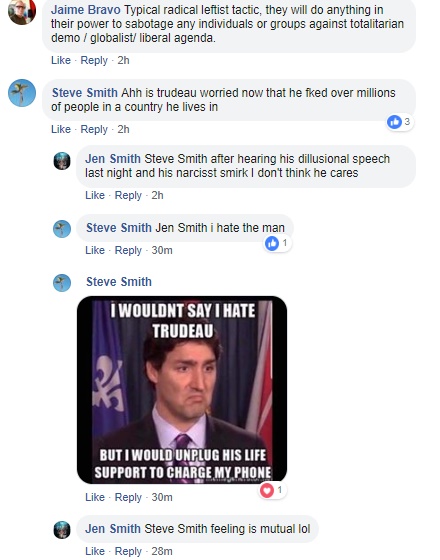 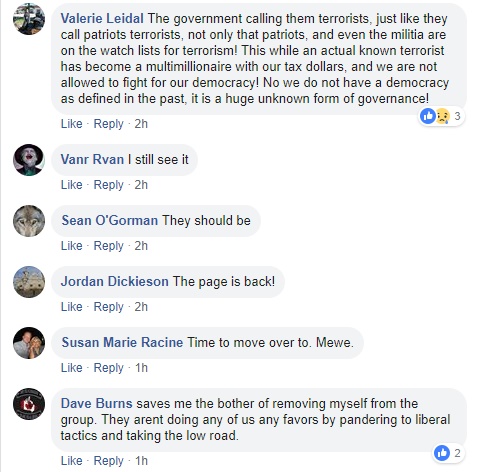 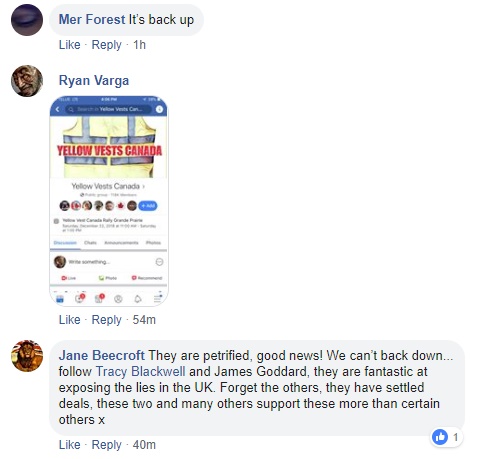 The Yellow Vests Canada page created and administered by Tyler Melenfant was indeed taken down.... for a time: 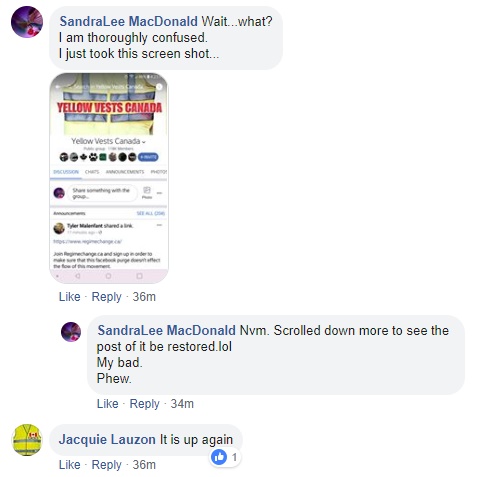 Sadly it didn't last too long:


While the main site was down, Malenfant was busy creating replacement groups, all of which look to have been deleted: 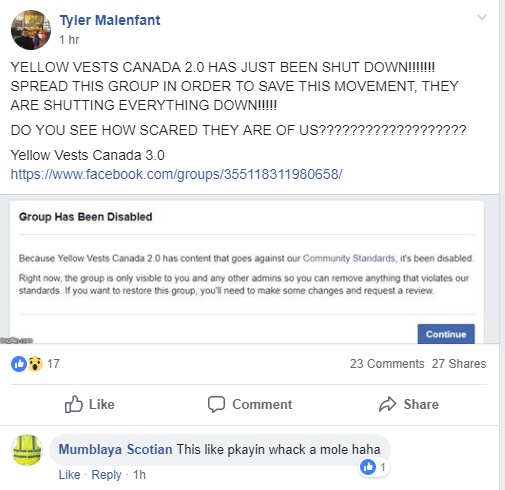 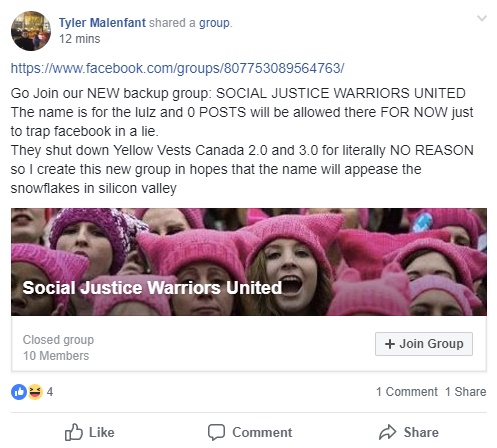 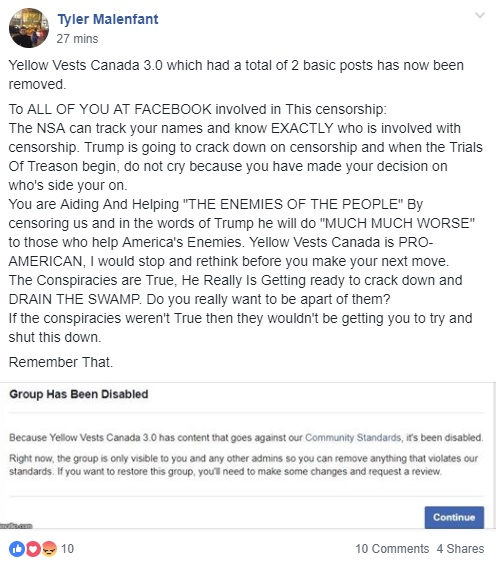 He thinks that the NSA is going to start arresting Facebook administrators for deleting posts and removing groups violating the Terms of Service of a private business for censorship and treason.

This represents the brain trust of the reactionary Yellow Vesters.

It is this post however that is the most telling: 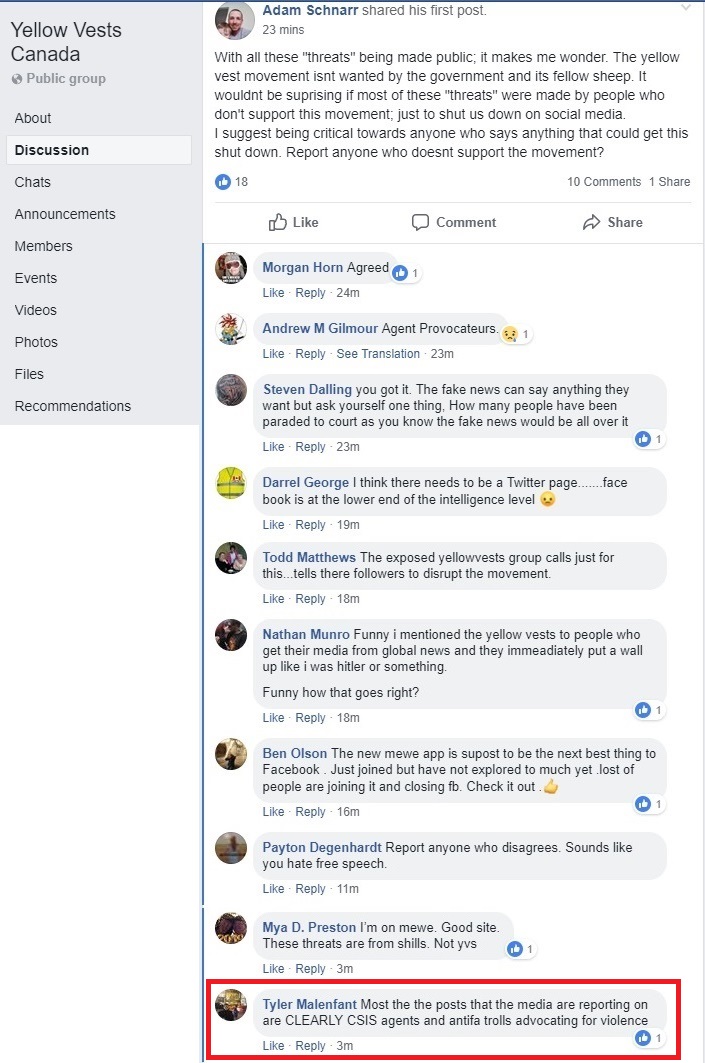 This thread in many ways encompasses the mindset of the entire "patriot" movement in Canada, the United States, and other countries where the far right is active.

When presented with clear examples of bigotry, members of these groups either:


I'm sure that many readers are both frustrated and dumbfounded when, presented with clear evidence that people who hold similar extremist views have committed horrible acts of violence, deny that it happened and continue to claim the left or "antifa" commit all of the violence. They have managed to rationalize away every act of violence committed by far-right extremists as either justified, not having happened, or ACTUALLY evidence of "antifa" violence, further confirming their biases and justifying their moral integrity.

This is a movement that never takes responsibility for the behavior of their members and supporters and always assign blame elsewhere.

1. Yesterday, I asked several moderators of the Yellow Vests Canada Facebook group, which has >100,000 members & has become a platform for talk of killing Trudeau, to comment. pic.twitter.com/lfA7t7FcFh
— Stewart Bell (@StewGlobal) January 11, 2019

2. One of them responded & I will post what he said in case it offers insights into what this group is about. He starts here by pointing the finger at Antifa. pic.twitter.com/77saT2UZDo
— Stewart Bell (@StewGlobal) January 11, 2019


3. Then he claims CSIS "may be" the posting the Trudeau death threats on the Yellow Vests Canada page. pic.twitter.com/R5c2eFzlKc
— Stewart Bell (@StewGlobal) January 11, 2019


4. He goes on to suggest CSIS has been infiltrated by treasonous elements. pic.twitter.com/SRBcGmcXYJ
— Stewart Bell (@StewGlobal) January 11, 2019


6. This is all according to this guy, who's name appears first on the main Yellow Vests Canada Facebook page's list of admins and moderators, for what its worth. pic.twitter.com/h7dx2H4cLY
— Stewart Bell (@StewGlobal) January 11, 2019

In some ways, it really is fascinating to watch is not also rather concerning.

But if there's one thing I've learned over the years is that members of these groups will turn on each other at the drop of a hat to save their own skins: 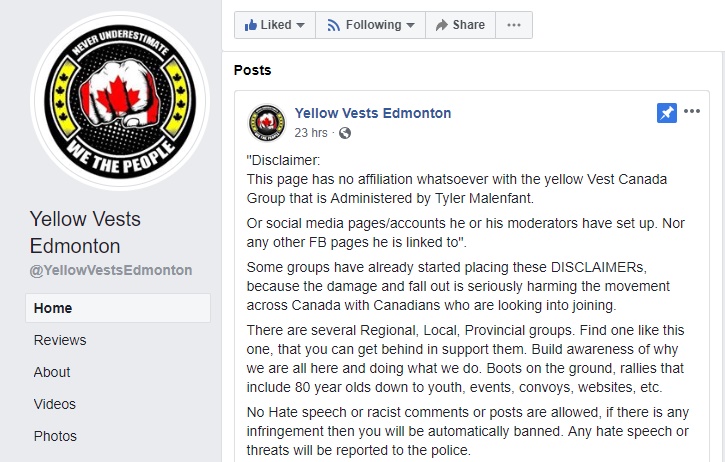 Of course, considering who participates in the Yellow Vest protests in Edmonton, I'm not sure that they have any claim to moral high ground.
Posted by Nosferatu200 at 00:06