Imagine that a political party has emerged which condemns secularism and the separation of church and state, promotes the recriminalization of homosexuality, strong censorship of what it deems to be blasphemous, adherence to strict gender rolls, and which advocates the for their religious views to become the law of the land. In Canada, that has been a reality since 1987 when the Christian Heritage Party emerged. 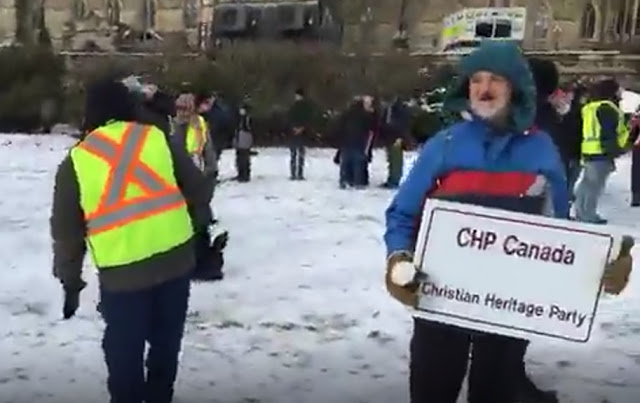 A year after it came into existence, the CHP won 102,533 votes in the 1988 federal election. Since that time support for the CHP has declined; after temporarily losing official part status they won 10,110 votes in the 2000 election while their lowest vote tally with party status was 15,284 in 2015. Still, the party remains and will likely run in the next federal election on this platform, choice portions of which I've included below: 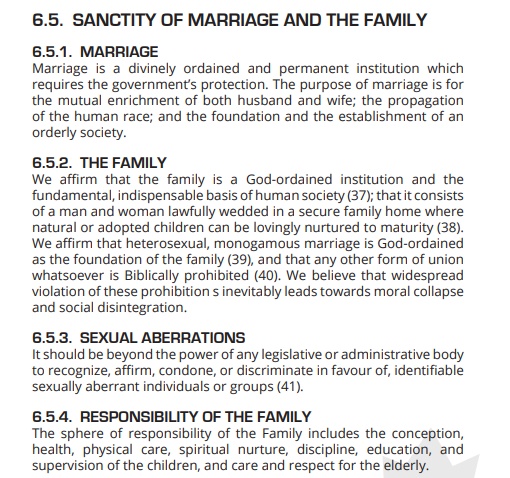 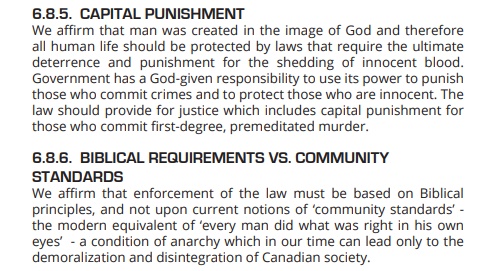 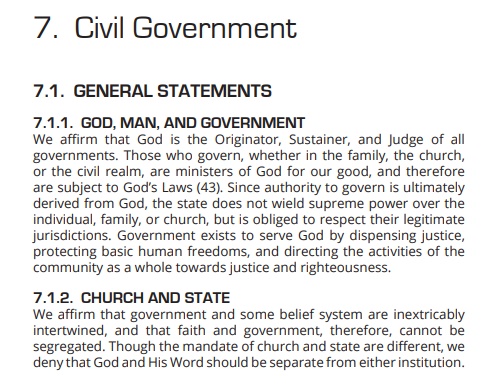 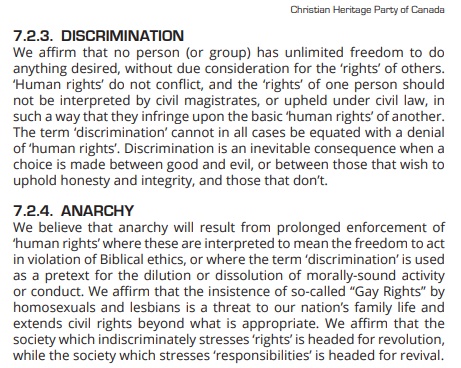 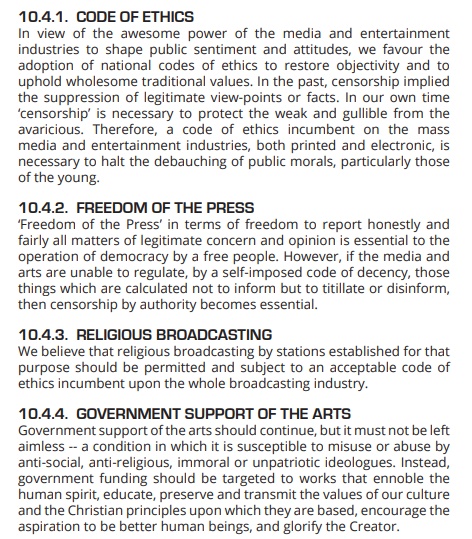 In general, most Canadians recognize the CHP and other similar religious based parties that have come and gone as being on the political fringes with no real chance of attaining power on their own. Of course this doesn't preclude other groups and individuals who hold similar views from influencing mainstream political parties:


Still, political parties such as the CHP are generally ignored as being rather irrelevant.

Such is also the case for the relatively new Islamic Party of Ontario, a group so fringe that it barely has an online presence: 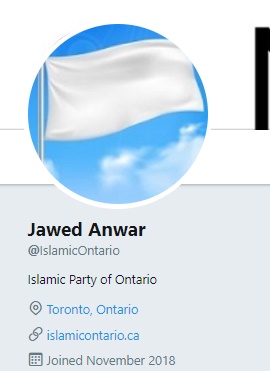 Not yet a political party, should they ever run candidates the Islamic Party of Ontario will have likely even less of an impact than the CHP has in Canada; I can't imagine the IPO breaking 1000 votes in all of the province. That said based on what little there is online their positions are as extreme as that of the CHP. One thing that is certain is that the current leadership (and perhaps only member) of the IPO is a fan of what Doug Ford has done in the province of Ontario already: 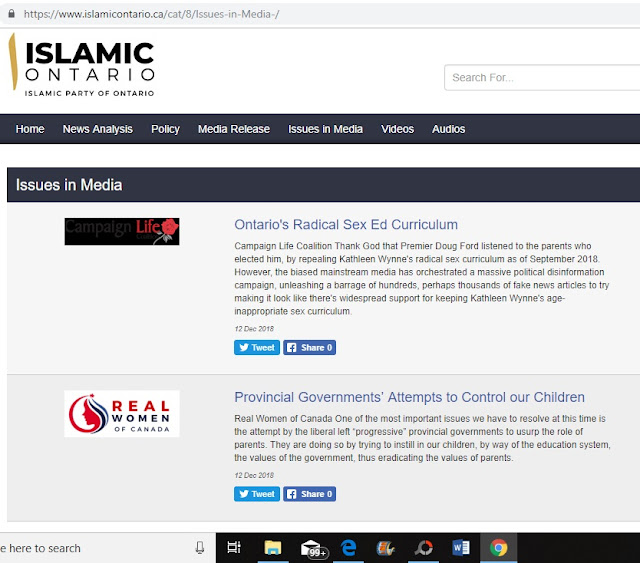 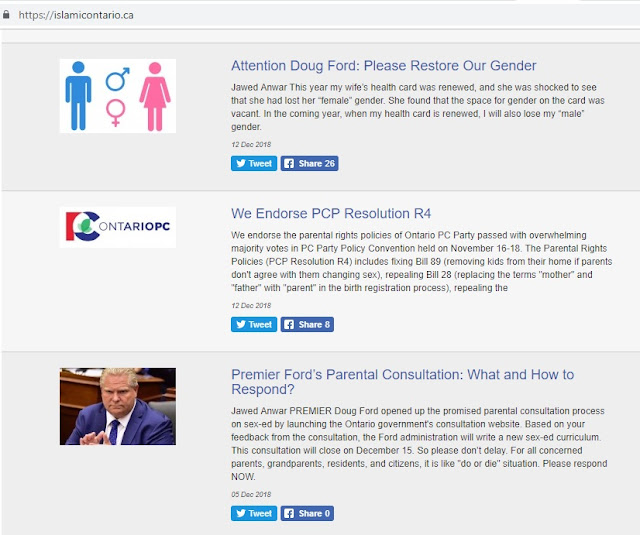 Basically, a social conservative party that is similar to that of the CHP. In fact if you were to replace "Bible" with "Quran" in the CHP platform and vice versa for the the limited amount of information on the IPO, they would be almost indistinguishable.

However this hasn't stopped the far-right Islamophobes from losing their shit: 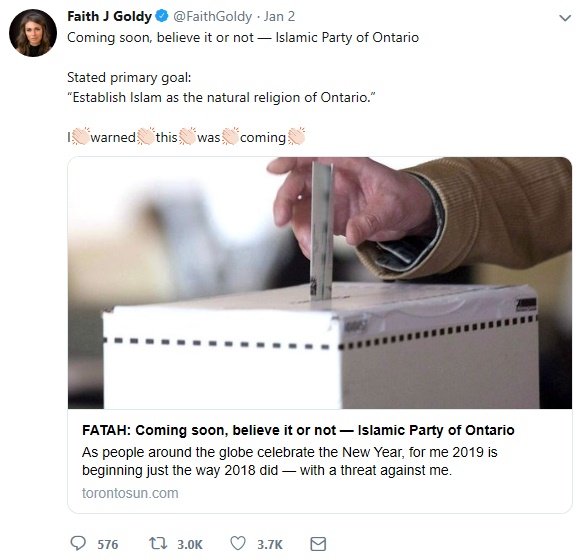 I might note here that of the 82 people who were following the Islamic Party of Ontario Twitter account, fully half of them appear to be conservatives and right-wing nationalists who oppose the fringe party including Goldy.... 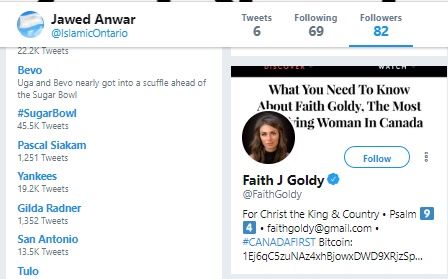 .... and Georgeanne Burke who has been featured twice on the blog: 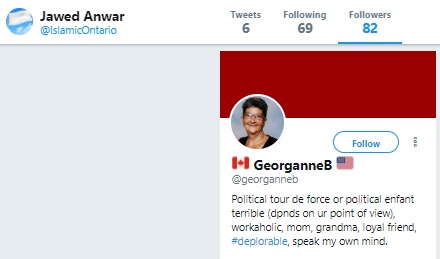 There is also this woman who has followed the account and who has posted and retweeted some rather incendiary comments: 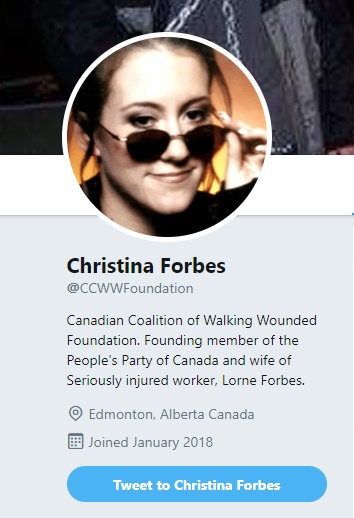 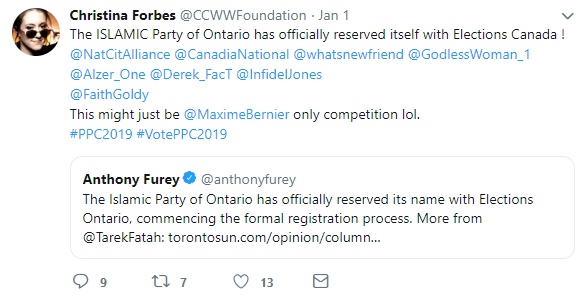 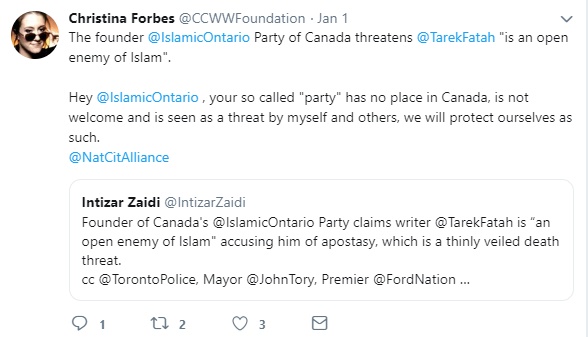 Two are of special concern. Islamophobe Eric Brazau has created a caricature of a Muslim extremists that he has been using spread his hatred; Ms. Forbes re-tweeted a video in which he makes incendiary comments without questioning the source: 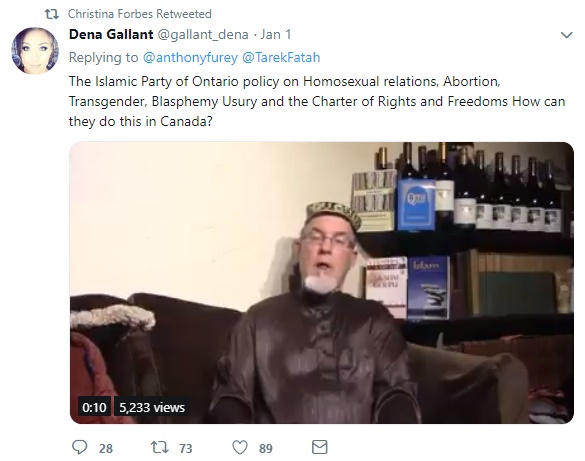 In another tweet she suggests that she is ready to use violence to oppose not just the political party but Islam in general and a desire to join the virulently Islamophobic III% militia: 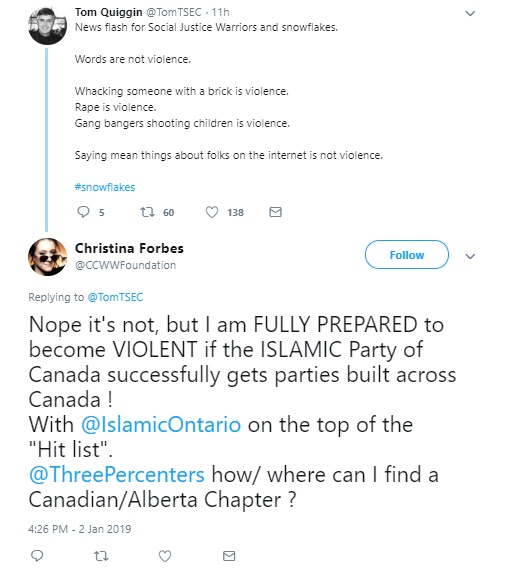 I might also mention that she's okay with Dara "Nazi Mom" Graham and her involvement with the reactionary Yellow Vests Canada protests:


Now all of this would be the reaction that one might expect from the equally fringe far-right. Unfortunately, enablers in both the media and politics have decided to magnify the issue for their own rather cynical purposes.

First Tarek Fatah who writes for the "Toronto Sun" wrote a hyperbolic article about the founding of the fringe party (not the one he linked to in the screen shot below). A man who appears to treat every Islamophobic conspiracy theory with credulity, Fatah also couldn't help injecting himself into the story:

And how did they threaten his life? 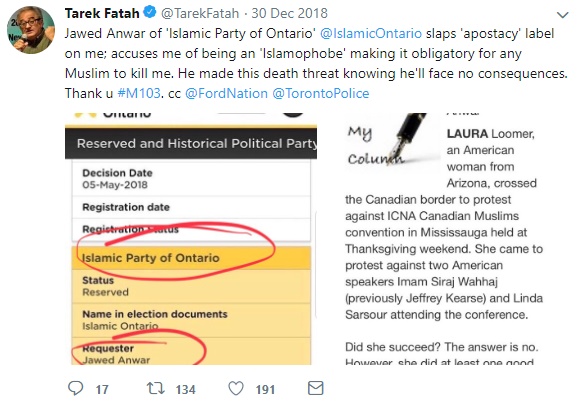 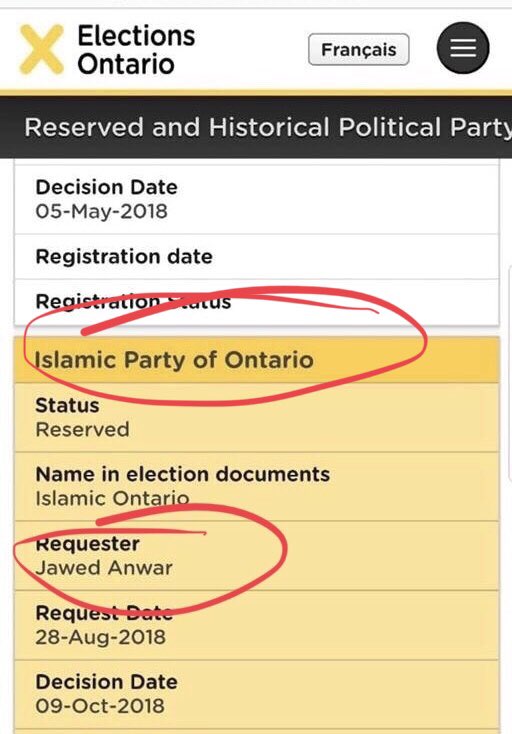 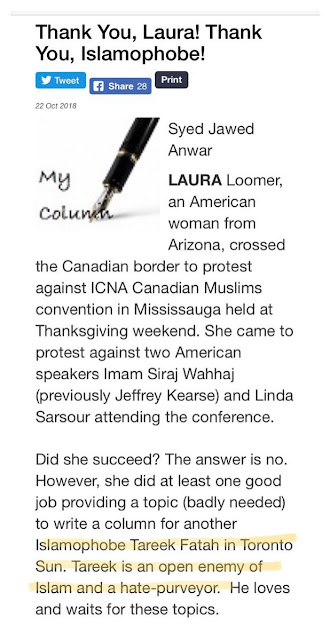 Uhm.... no. That's not a death threat. And as much as I can't say I'm especially fond of the IPO based on what little I've read, it would be accurate to describe Fatah as an Islamophobe: 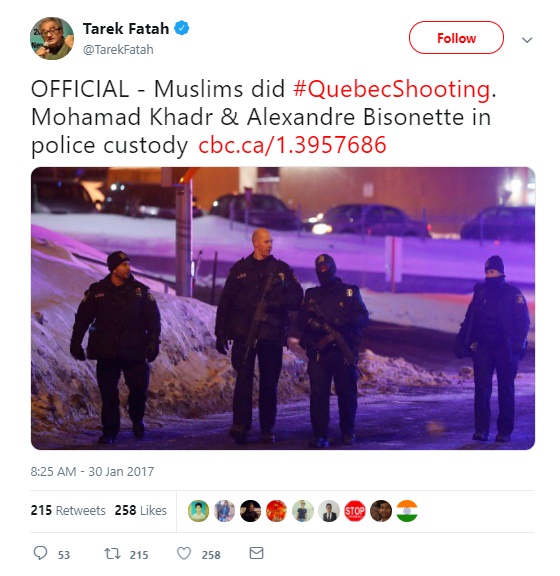 But Fatah knows his even more credulous supporters, many of whom couldn't tell a Muslim from a Sikh, from a Mexican, from a white guy with a dark tan, will rally around him since he is happy to tell them the lies that they have come to accept as truth: 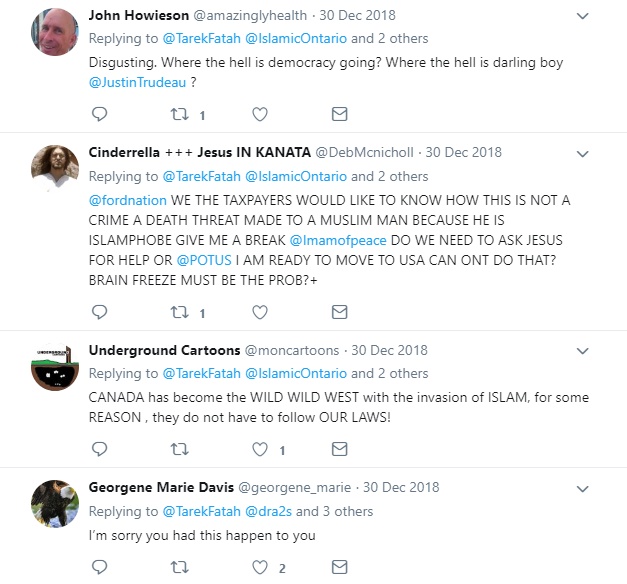 On the political side, if one thought that Kelly Leitch's absence from the world of politics would diminish the scapegoating of those who are not "Old Stock" Canadians, Maxime Bernier asks you to hold his beer: 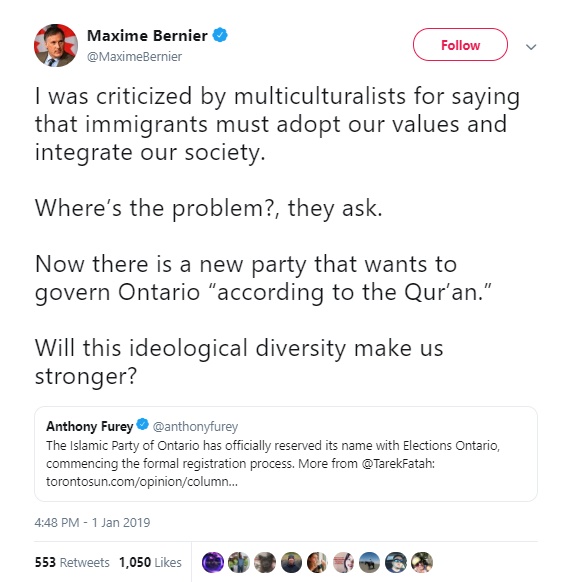 The comments are as cringe worthy as one might expect: 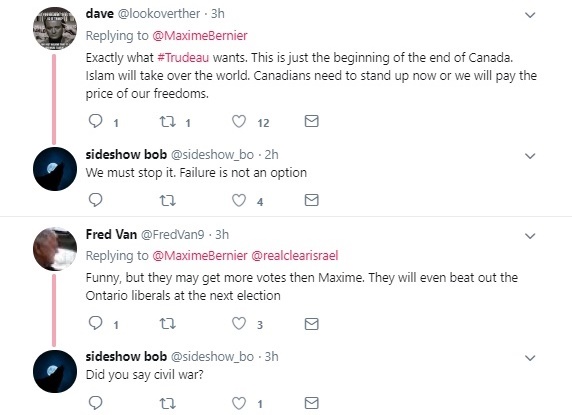 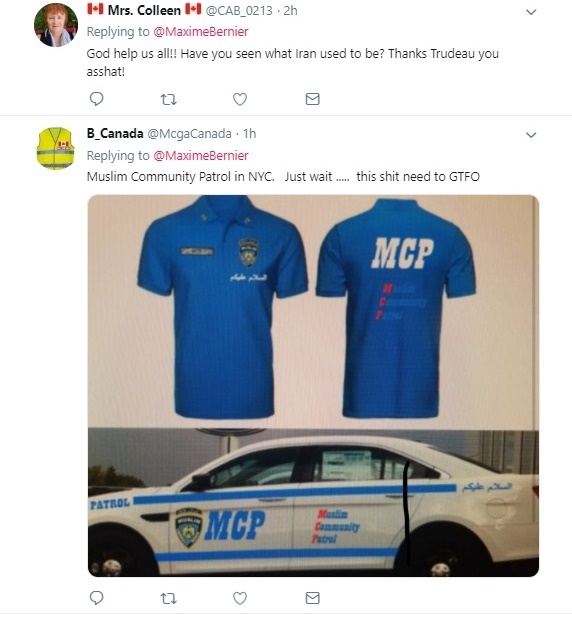 There are also those who think that the government has the power to arbitrarily dissolve political parties which is sort of telling:

In any case, ARC takes the same position on the Islamic Party of Ontario that the Canadian Anti-Hate Network has outlined:

Columnists at the Toronto Sun, far-right groups, Maxime Bernier, and others, have been agitating over the creation of the ‘Islamic Party of Ontario’. Its platform is anti-abortion and anti-LGBTQ+. 1/
— Canadian Anti-Hate Network (@antihateca) January 3, 2019

There are no indications that it has any support – and certainly not enough support to gather 1000 signatures and register as a political party in Ontario. Anwar's Facebook page has 41 likes and 141 Twitter followers, almost all of them critics, not supporters. 3/
— Canadian Anti-Hate Network (@antihateca) January 3, 2019

To make it out to be a significant threat at present time is fearmongering. We will continue to monitor Anwar's project, which we oppose on principle based on its stated goals. 4/4
— Canadian Anti-Hate Network (@antihateca) January 3, 2019

I will keep an eye on the Islamic Party of Ontario as I would the III% militia, WCAI, Northern Guard, Nationalist Party, and other fringe groups whose individual members may be dangerous to individuals but as a group aren't likely to storm the gates of power despite their claims. I'll also be keeping an eye on those groups who try to use the existence of the IPO as a rationale to justify their own bigotry.
Posted by Nosferatu200 at 16:56

Why isn't the lousy media doing their job pressing Scheer on his affilations with that Islamophobic grandma and the rest of his hate propaganda team?

The more they keep putting their head in the sand and drilling Trudeau over his trip to India and the pipeline file, while turning a blind eye to Scheer's connections to hate, the more they're normalizing this.