In following the reactionary Yellow Vests protests in Canada, there has already been a great deal of factionalism within that movement. 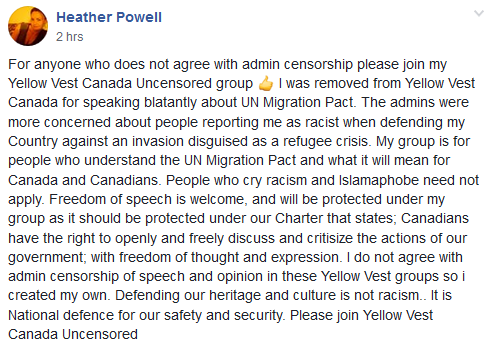 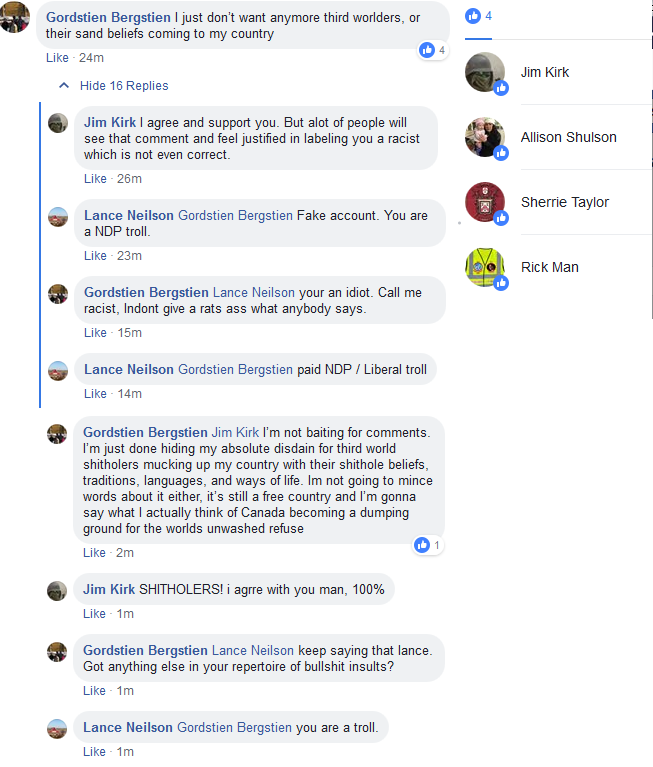 THREAD:
Does everyone want to see a convoy go to Ottawa? Do you really want it to be successful; to win hearts and minds to our cause? Because with my experience with these things, I want to share w/ y’all what will work and what won’t. #convoy #yellowvests #giletsjaunes /1
— Bernard Hancock (@ruffnecknation) January 3, 2019

Hey #ruffnecknation! It’s punks like these that will ruin the Ottawa convoy. I need your help; I need trolls. Start commenting on all their stuff, start subtweeting and mocking(preferable to RT’ing). Light these dorks up. Make sure your friends know they’re imposters. pic.twitter.com/mVV92QwaZs
— Bernard Hancock (@ruffnecknation) January 3, 2019

If anyone’s questioning why I have such disdain for the #yellowvest movement and their attempts to piggyback on the legit convoy to Ottawa, plz watch today’s rallies in #reddeer #edmonton, #calgary, #medicinehat and #fortmac and the resulting media coverage.#AbLeg #grandeprairie
— Bernard Hancock (@ruffnecknation) January 5, 2019

Now Bernard Hancock (who has blocked ARC's Twitter account even though I have never been in contact with him via that means) has a hate on for the reactionary Yellow Vesters even though he kind of, sort of, ran in the same crowd for some time; he was at an event organized by the Worldwide Coalition Against Islam in Calgary and an event hosted by Jeff Sharpe in Edmonton. That said I can't necessarily argue with him regarding the absolute embarrassment that the reactionary Yellow Vesters really are. However I wonder if he would even pay attention to them if not for the fact there is a Yellow Vests Canada convoy to Ottawa that is competing with the one that Hancock in involved with. Moreover, the Yellow Vests convoy Go Fund Me has already raised substantially more (in the $60,000 range) than the "official" convoy to Ottawa rally Hancock has raised (around $11,000 last time I checked). 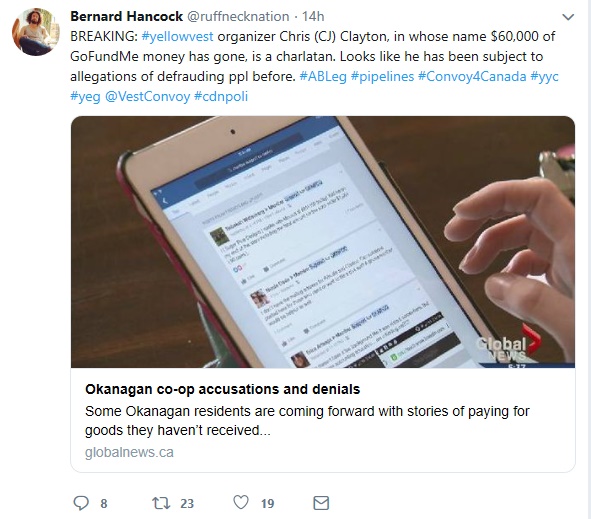 The link to the article Hancock posted can be found here.

More from this thread: 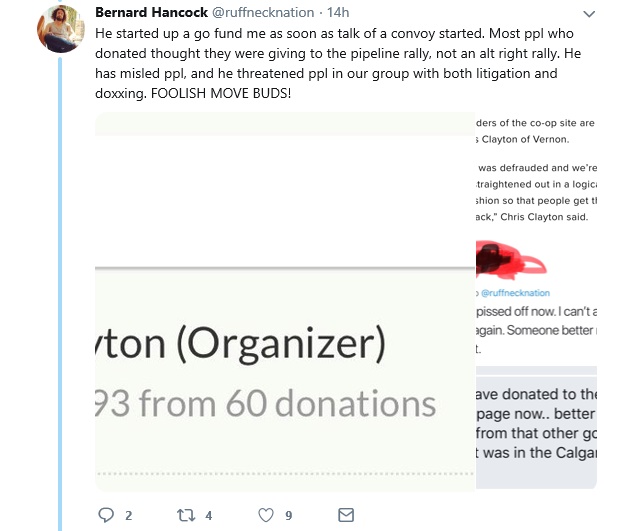 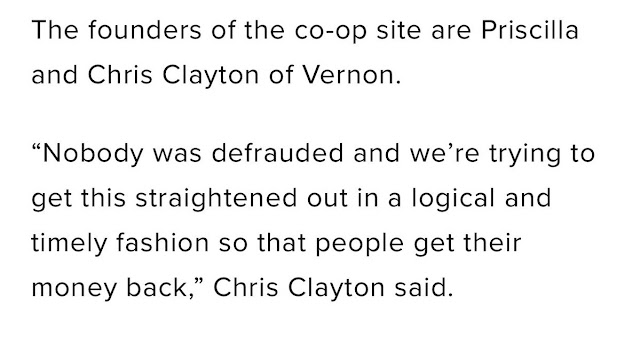 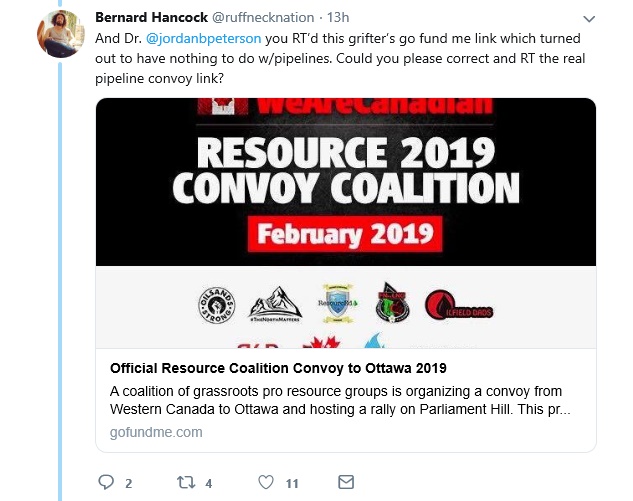 This has resulted in a rather robust discussion: 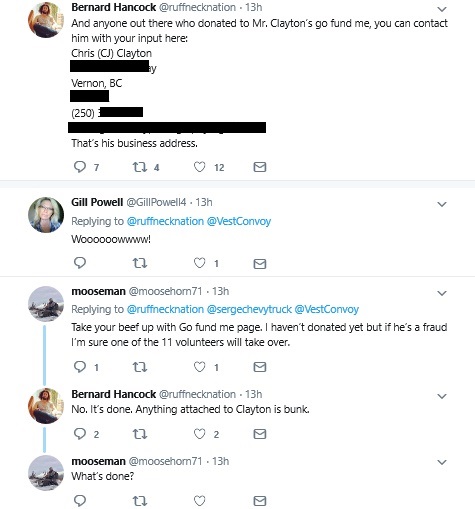 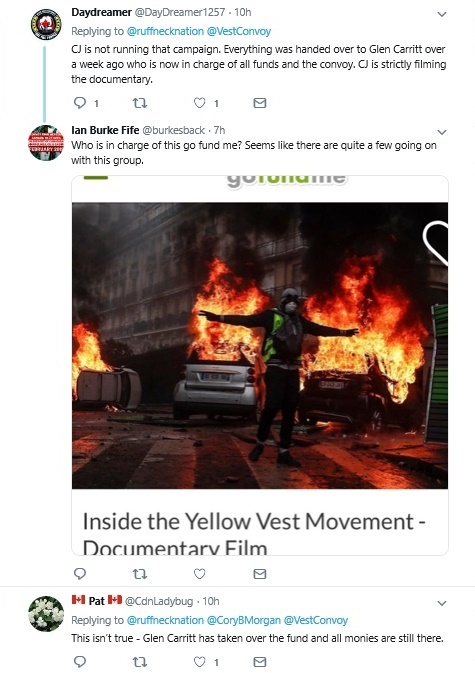 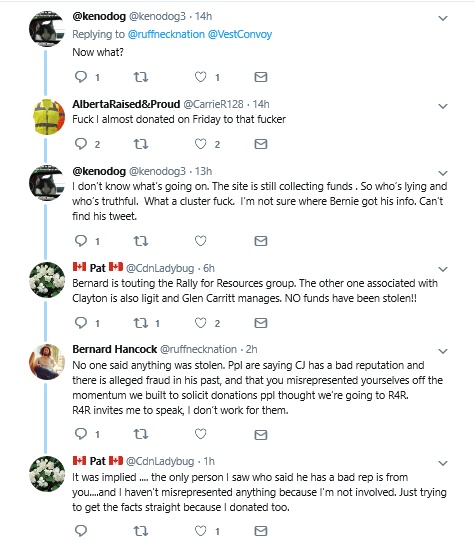 Now I can't say one way or another whether or not Hancock's suggestions are accurate, but it isn't as if this would be the first time someone involved in the reactionary Yellow Vests protest was proven to be dishonest. 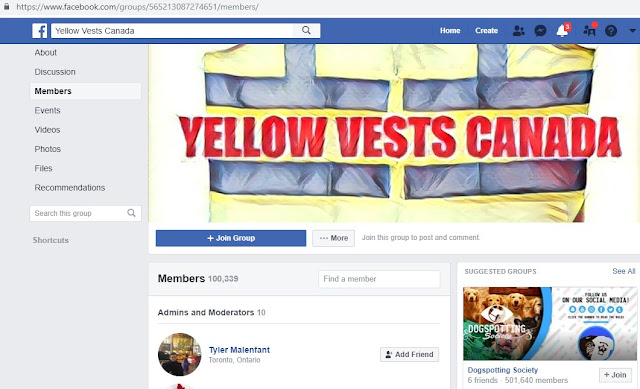 For example, Tyler Malenfant, the founder and administrator of the biggest reactionary Yellow Vests social media site, is once again claiming that the antisemitic and racist rhetoric he posted online in 2015 which ARC covered then wasn't him even though it was CLEARLY him. His lies are especially transparent in the "Edmonton Star" article published Friday that focused on extremism within the reactionary Yellow Vests movement:

The Yellow Vests Canada Facebook page lists a “Tyler Malenfant” as its administrator. The same Facebook profile was used to post comments on an Al Jazeera news article about a Jewish conspiracy to “destroy” Christianity and replace North America’s white majority through a concerted effort of mass migration.

When asked about his comments on the news article, the user of the profile deleted the comments and denied they ever existed. The user said the screenshots StarMetro took were fake.

I'll get back to this article in a moment, but recently I received a number of screen shots from the group Malenfant administers that I'd like to share: 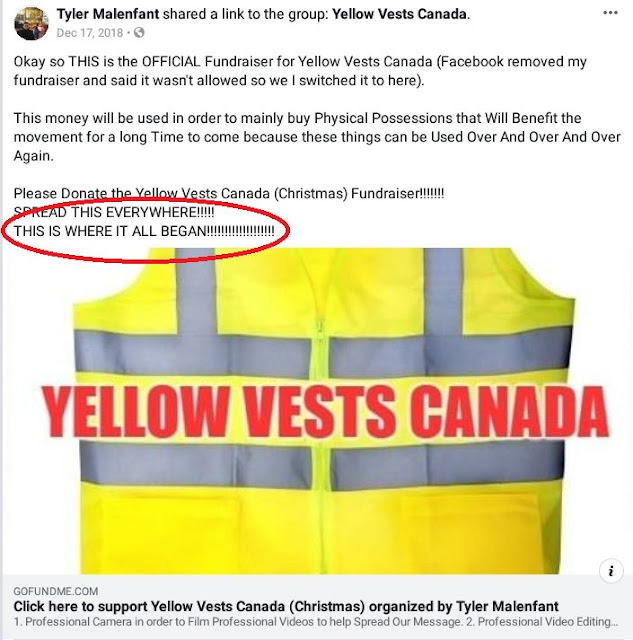 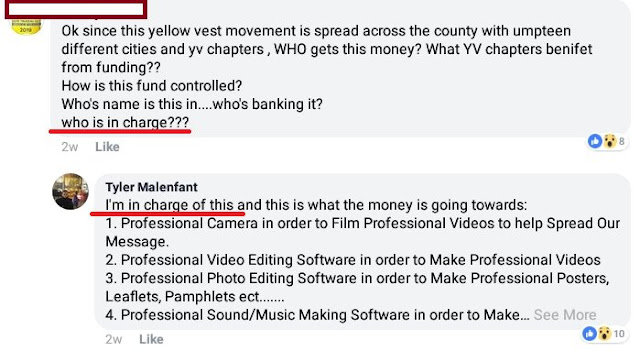 Now this is all sort of grist for the mill, but we also have evidence that Malenfant has just a bit of an autocratic streak: 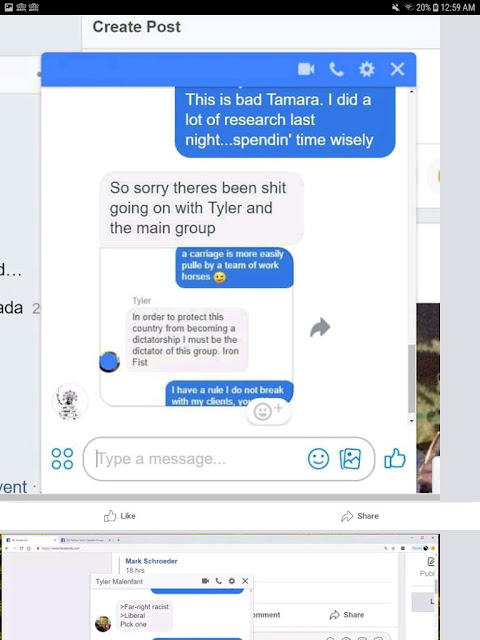 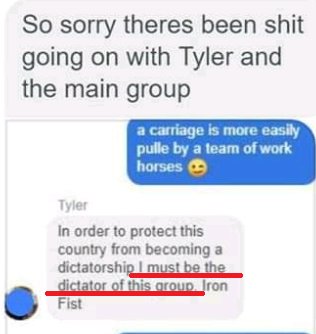 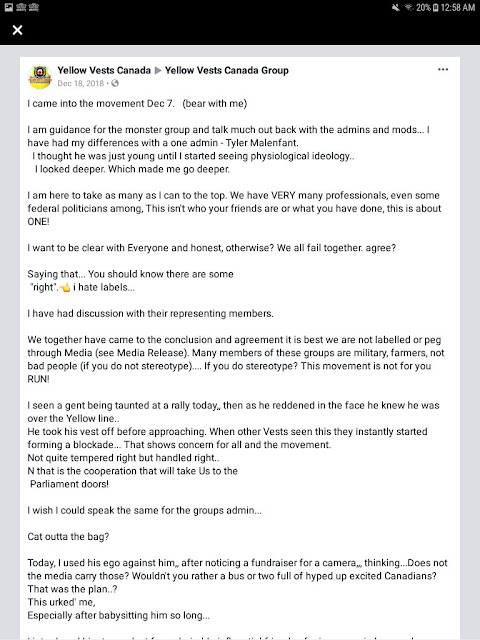 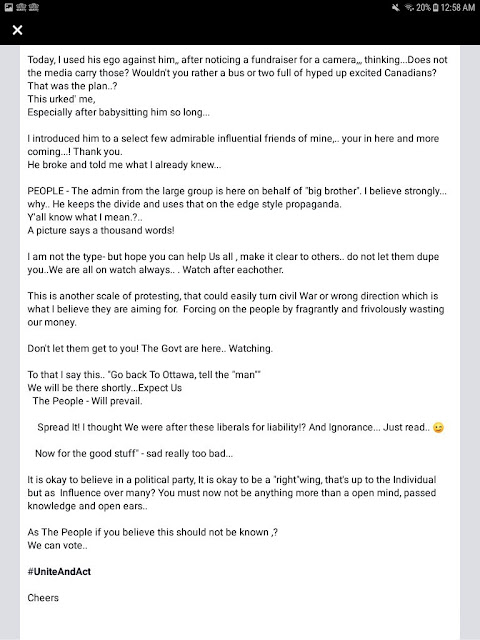 Getting back to the "Star" article, the primary focus is on the extremism -- racists, antisemitic, Islamophobic, and violent -- within the reactionary Yellow Vests protests:

Within five minutes of browsing the page, StarMetro found comments about Nostradamus predicting a race war, conspiracy theories about how the Rothschild family of bankers (who are Jewish) rule the world and one commentator saying they hope a plane carrying the prime minister would crash.

A profile under the name Jess Derouin posts about how sharia law, an Islamic form of governing, would be implemented in Canada in “5-10 years tops if we don’t act now.”

With this in mind, I would invite readers to visit "Yellow Vests Canada Exposed":

We did our best to document the #Islamophobia from the #yellowvestscanada admins. There are 10 admins and 3 are featured here and 1 more on @ARCCollective .
— Yellow Vests Canada Exposed (@VestsCanada) January 5, 2019

The folks behind this Twitter account have been doing fantastic work bringing to light the extremism within the reactionary Yellow Vests protests in Canada and have included numerous screen shots including the following:

There are folks like this in the YVC movement. They are not denounced. @JustinTrudeau @CBCNews @vicecanada #cdnpoli #YellowVestCanada pic.twitter.com/NskwtgGLr2
— Yellow Vests Canada Exposed (@VestsCanada) January 6, 2019

Here is one of the Colleen admins at #yellowvestscanada . She clearly has no problem with #Islamophobia . pic.twitter.com/wOvCN5LJIq
— Yellow Vests Canada Exposed (@VestsCanada) January 5, 2019

If you are on Twitter and would like to be informed about the extremism within these protests, I highly recommend you give "Yellow Vests Canada Exposed" a follow.
Posted by Nosferatu200 at 14:05