ARC readers are aware that Stormfront (as well as the even more disgusting Daily Stormer) was taken down in August not long after the events in Charlottesville that culminated in the murder of an anti-fascist activist by a suspect alleged to be a white supremacist. The website was down for over a month before it managed to find it's way back online again.

One of the companies that helped in that effort is the Toronto-bases Tucows Inc.: 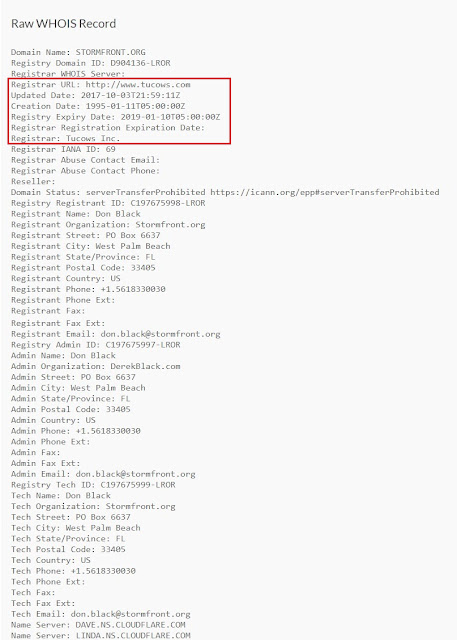 Stormfront isn't the only hate site hosted by Tucows.

Your Ward News, particularly since the involvement of sexual predator James Sears as editor, has become a vehicle for some of the worst racist, antisemitic, misogynistic, and anti LTGBQ hate propaganda in Toronto since the early 1990s when the Heritage Front was at their height in the city. In fact Gary Schipper, the Heritage Front propagandist, had been a writer for the rag until about a year ago.

Your Ward News had been disseminated mainly as a tabloid to homes in the Beaches area of Toronto for years. Canada Post had been contracted to carry the hate propaganda, however after the complaints of many of the carriers as well as the efforts of a lot of good people in Toronto, Minister Judy Foote issued a prohibitory order against the future delivery of the paper. And while both editor Sears and Your Ward News Founder Leroy St. Germaine are currently trying to have the order reversed, the two "men" are also facing criminal charges as a result of the efforts of Warren and Lisa Kinsella.

Now Sears has claimed that they have been able to continue to distribute the rag door to door using other vendors, but a primary means of distributing the hate propaganda has been the website. And like Stormfront, the Your Ward News hate site is also registered by Tucows: 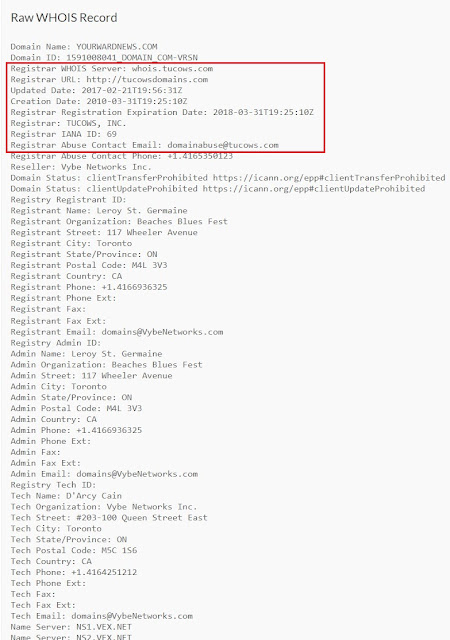 If our readers are interested in letting Tucows know how they feel about the decision to register these two sites, feel free to contact Tucows using the following:

Daily Stormer's getting support from a smaller Vancouver cybersecurity company called BitMitigate as well. Seems the owner is a "free speecher" though so public pressure can only do so much. http://www.columbian.com/news/2017/oct/02/firm-offers-cybersecurity-for-neo-nazi-site/

Tucows is the domain name registrar. They don't host the website.