There Really Is Life After Hate Part I

Back in November 2016 I was at a pretty low point for reasons both obvious and much more personal. I had been planning on winding down the blog and stepping away for good, but then Donald Trump was elected president and the racist right was electrified and emboldened by the result. I didn't feel right about leaving then; I'm under no illusion that my little spot on the Internet is of great importance, but I figured that if I could contribute anything in the upcoming struggle, I should so what I could.

I wasn't exactly thrilled by the prospect however.

Not long after making the decision to stick around, I received an email from a person who ARC had once been closely keeping an eye on due to her active involvement in the racist movement in Toronto. We (when ARC was a "we") continued to keep tabs on her even after her active involvement appeared to end, and over the years I noticed that she had begun cutting ties with her former friends. When this young woman contacted me, it was to let me know that she had gotten out four years prior and she wanted to tell her story and to let others know that they too could get out. Her message reminded me that in addition to informing people about the danger of the groups and individuals covered on the blog, ARC has also helped some people who were once active members of these groups to recognize the harm they have done to their communities and themselves and to find a way to change.

Recently she has contacted ARC again to let us know how her life has been after more than 5 years out of the movement. Not satisfied with simply walking away without attempting to right the wrongs she contributed to, she has since been involved with a number of initiatives that attempt to de-radicalize members of hate groups. She has also continued to tell her story to others in an effort to both provide an understanding of what attracts young people to hate groups as well as providing a way to escape and change while also recognizing that for real change to occur one also needs to work towards making amends for the harm that they have done.

The following was submitted by this young woman:

I made my exit from the far-right violent extremist movement over 5 years ago, and the physical removal was not the most difficult part, by any means. I do and always will hold the reasons why I chose to leave very close to me. Somewhere between another member being murdered, false narratives of the violent sub-culture it's self being exposed and the hypocrisy of being a female submerged in hate, I felt I had no choice but to leave. I chose the path of reforming in 2012 and hands down, it's the best decision I've ever made. I almost fear thinking where I would be now if I stayed buried in anger and hate; Most likely dead, in prison or extremely psychologically unwell.

Reflecting on all the times I would get into arguments with people over the ideology while I was still involved, I lost count of the number of times someone would tell me to "give it (the hate and racism) up and get over it". I'm here after enough time, effort and clarity to confidently say that it is very possible to let it go and change, but it does not happen over night. Realistically I know that reforming is a life long process. My perspective on this is that there will always be something new for me to learn.

Unfortunately I got racist ink on me shortly after I joined the movement. I started by searching for someone to do laser tattoo removal for the symbol I had on the side of my neck. I remember I was always so happy to go to each treatment and see it fade slightly more. During the time in between treatments while it was still visible and it was hard to walk out in public with people asking about it. I had no idea what to tell them; Part of me wanted to tell them to leave me alone, another part of me wanted to apologize profusely for the damage that hate can do and my deeper conscience told me that I was wrong to advocate for what I did once upon a time.

It took a total of 6 treatments over the span of a year and it was $600 well spent. I walked out of that last treatment smiling from ear to ear and thankful that I didn't need to carry that weight on my shoulders in public anymore. 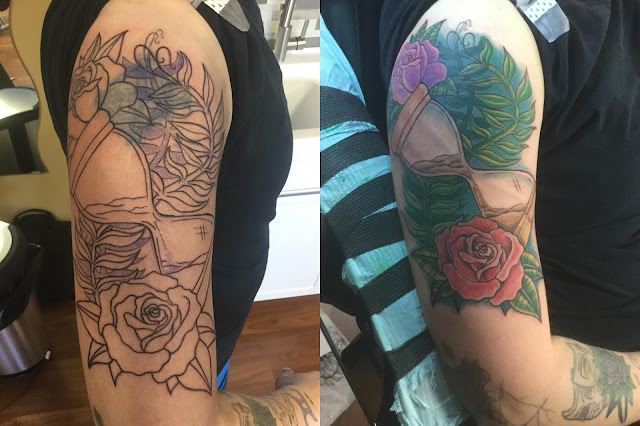 I had two other tattoos done which also symbolised hatred. I could easily wear cloths that would keep them covered and I have up until this point. Very soon though, I will be getting both of them covered with images that are a reflection of who I am today and who I want to be in future. No one else has to look at them, how ever I constantly wear them on me right now and whenever I look at them, it's an awful reminder of all my past mistakes; It's hard to have stuff on your body that you're ashamed of. I'm excited about these soon-to-be cover ups; the outside will finally match the inside.

It's unfortunate but when I left the extremism, I no longer agreed with their messages and propaganda, yet part of me still longed for my old friends and that perceived "brotherhood" they promised. Intellectually I knew there was never any sense of belonging for me within that group, but my emotional mind still wanted what was initially promised to me when I was first recruited. I remember so many times my head would be conflicted with a debate over whether I should go look for validation for leaving or whether I should look for reasons to go back. The only thing I can really comment on with this aspect is that I had to find myself.

I remembered back to some happy moments when I was a kid, most of them included my father. He passed away when I was young after a long battle with cancer and I know that part of my vulnerability for being recruited was because I was looking for a father figure in the guys I was being introduced to. The reality is that my father loved me and never wanted to leave; I think if he had his way he would have chosen to be around for ever, whether it was to watch me graduate college or to get more grey hair from teaching me how to drive. The guys in the movement belittled me on many occasions, which I know my father would have given me hell for even putting up with that and for advocating for hate.

Internally I also remembered that crazy tomboy I used to be as a kid who enjoyed climbing trees and building stuff out of Lego. I was able to retrieve some of those qualities again and incorporate them into my adult life. I think my favourite activity is treetop trekking (zip line and ropes course).

I really don't like admitting this to myself sometimes, but there will always be a small fear that I might run into someone from my past and they will recognise me. My experience tell me that if this were the case, it could go one of two ways:
Sadly if the former happens, there isn't much I can do aside from try to get away from the situation. If the latter happens, I truly hope that I've built up enough resilience to toxicity where I can see right through any of the emotional tactics they use. Of course there have been some places I have avoided going before, how ever I don't want to be constantly thinking about how many times I should look over my shoulder in one day. I use exposure therapy for this; as much as nobody wants to hear this, sometimes you just need to go out and do what you want your goal to be. I have to admit that on the rare occasions I still catch myself looking over my shoulder when I'm out in public. I suppose it's a force of habit that was hard to break and likes to rear it's head the odd time.

It became easier for me to make friends and repair ties with my family after I openly admitted I was wrong. My mom and brother were and still are strongly opposed to bigotry and the ideology which is fabricated by the white power movement. They are however very supportive of my recovery from those days. They have done more then enough, even though I probably didn't deserve their love and acceptance. I've talked about it with my mom before and she has said "that's part of loving your child. When they want to change, the door is open for them".

I made new friends at work, trying new activities and through generally getting out and socializing. I have friends of all different backgrounds and walks of life now and it's hard to believe sometimes that I would have thrown away these friendships over ideology and my own deep seated anger. I am open about my past and to my surprise, these people were very forgiving; all they seem to care about is who I am now.

From my own experience, hatred is based on fear and isolation. I can realistically say today that I never had to live in either one of those. There are people out there who I can have genuine friendships with.

This is fantastic to read. I look forward to reading more stories like this. There is a reason many of us leave the 'network' we attributed ourselves to be a part of. It can be hard, but people in our society are very forgiving, as long as we are not out to cause harm.

Thanks Daniel!
I'm the person who left the extremist movement in the GTA. I googled your name and found your story... It was great to read :)