Last weekend I wrote about the bigots who protest a conference discussing white privilege that too place at Ryerson University. I primarily used Ronny Cameron's video of the event interspersed with some of my own observations:


Not long after Shree Paradkar wrote about the protest in the context of the founding of the Canadian Anti-Hate Network (which a shout out directed at ARC) for the "Toronto Star":

The activities of these white supremacists — as evinced in the gathering outside Ryerson’s University’s White Privilege conference last week — often fly below the radar of mainstream media that are ill equipped to monitor and report on such obscure ideologies.

Because the extreme right-wing is not ideologically coherent and is dotted across Canada, tracking its growth is a task undertaken piecemeal by anti-fascists, anti-racism activists and a few academics. For years, the anti-racist Canada (ARC) collective fought bigotry one blog at a time, existing as a resource for journalists and law enforcement.

Earlier this month it got some company.

The Canadian Anti-Hate Network (CAN) was launched after a group of 16 Canadians — including an ARC operator — came together to close the data gap in researching and reporting on far-right violence.

The usual assortment of trolls attacked Ms. Paradkar using rhetoric that further confirmed the veracity of her article highlighting their bigotry, but I personally was most amused when Ronny Cameron, along with Devon Mannix and Andrew Zokvic (who is referred to here, here, and here in previous articles) learned about the article.

They are going to be SO happy that I'm using this!

Well ya'll got your wish, though if I may I would like to make two observations:
Cameron, Mannix, and Zokvic are correct that there is indeed a lot a material that they've provided ARC to work with and I will get to it eventually, but I would like to first focus on what Mannix is up to:

Yes, Devon Mannix has looked factionalization and fracturing of the far-right groups in Canada and has decided that the solution to their problem of disunity and backbiting is yet another group.

Genius I tells ya!

And it isn't just that he is starting a new group. He and his two friends are breaking off another and making sure they are burning bridges in the process: 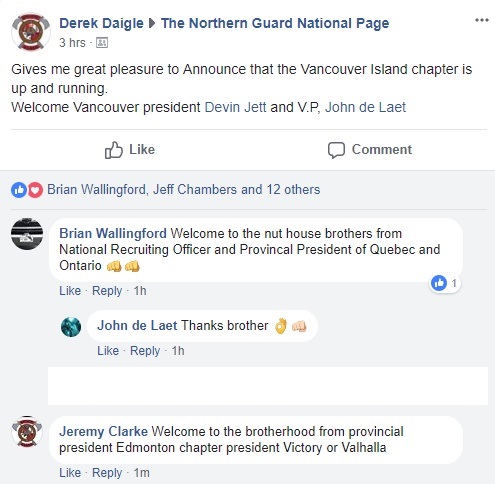 It hasn't even been a month since the Northern Guard announced the establishment of a chapter in British Columbia. Some of the members, including the leader, even headed over to Alberta to share bread and salt with that provinces Northern Guard chapter: 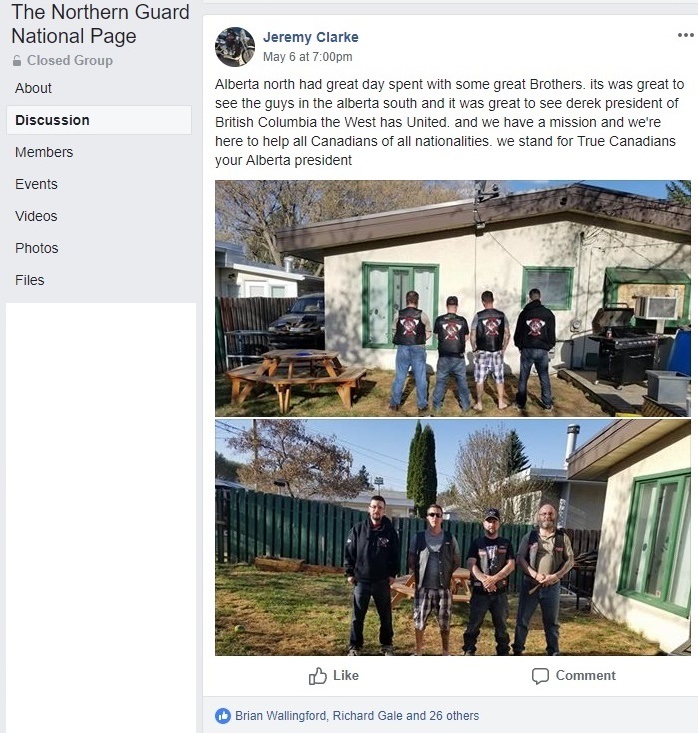 Devon Mannix had expressed his own strong approval of the Vancouver Island chapter, largely due to the unabashed antisemitism and white supremacist orientation of the tiny membership. Mannic also made nice with the Alberta Northern Guard chapter, including attending the Artur Pawlowski's protest outside City Hall in Calgary on April 14: 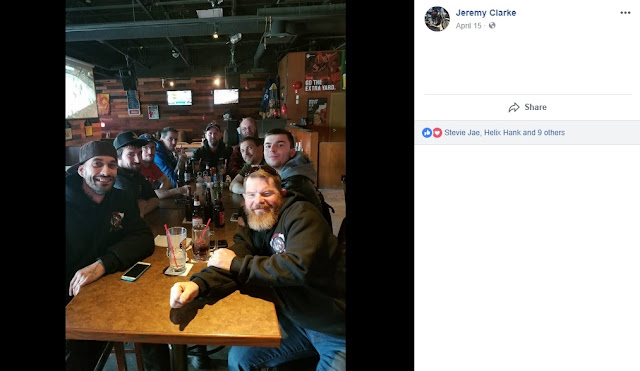 Oh, those were halcyon days of yore!

I do so enjoy the grandiose language at the end of this screen shot.

Devon Mannix isn't going to have any children.

Not many people commented (suggesting that they don't have much of a following.... quelle surprise), though one member of the national Northern Guard did impotently take a swipe: 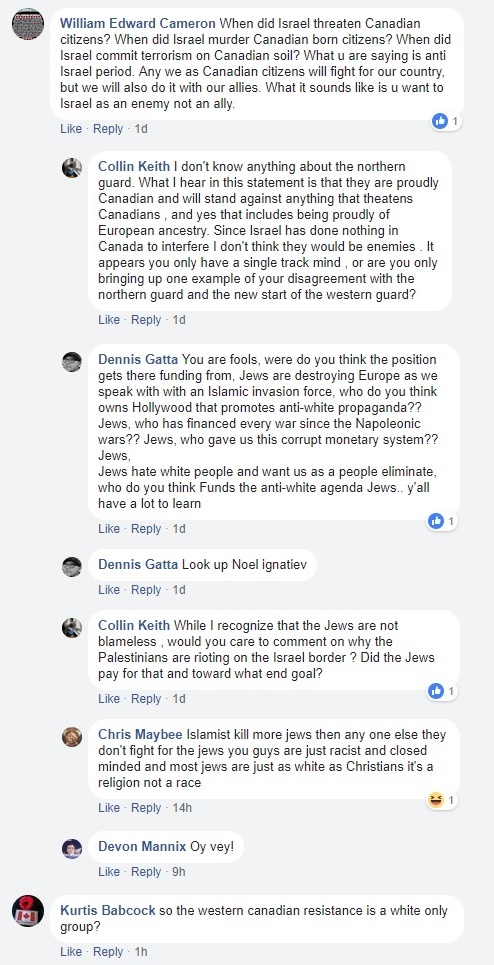 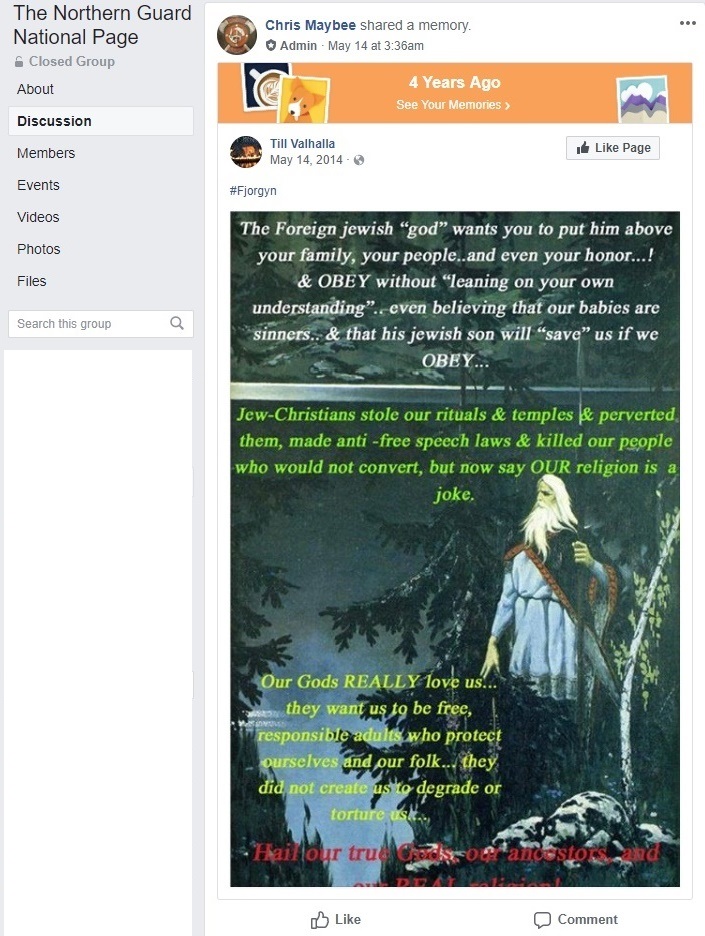 Just to be clear, the Northern Guard is a self-declared (by their founder and president) to be a "white nationalist club". I guess the problem is that they just don't hate Jews quite enough.

So far there isn't much of reaction to this break-away chapter from the Northern Guard's national.... er.... leadership. That makes sense since they are currently engaged in some critical endeavors such as making sure their patches are just right.... 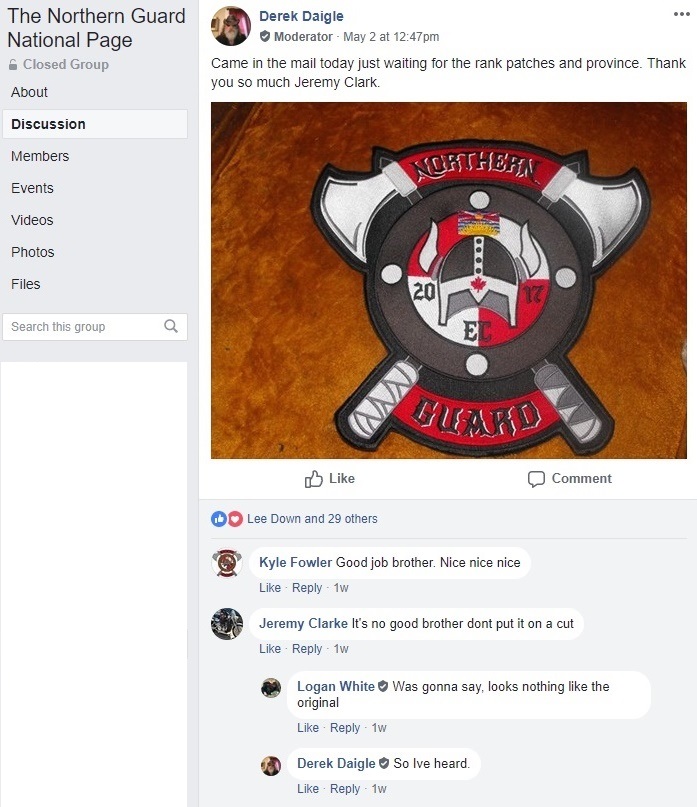 .... taking vacations in the very "shit hole" countries whose citizens they would prevent from visiting Canada.... 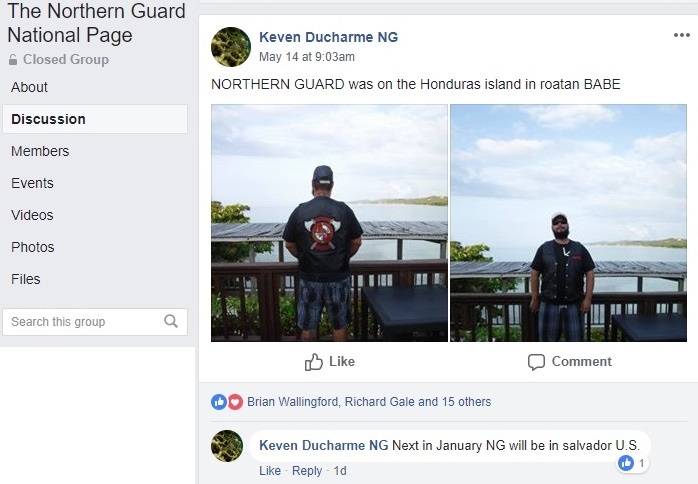 .... and trying to identify and get dirt on me:

But I can guarantee that the information you claim to have isn't about me.

Among the many reasons I know this is to be true is because my life is not interesting enough to provide you with a terabyte of information. And also.... 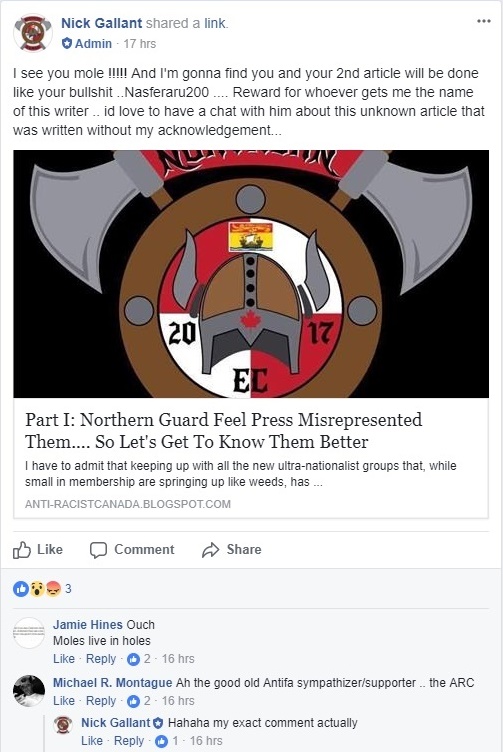 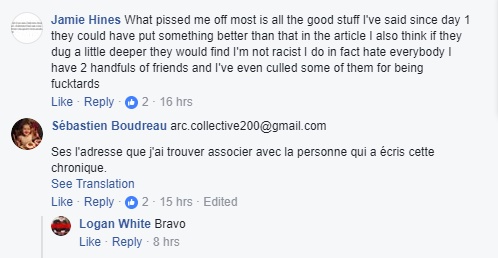 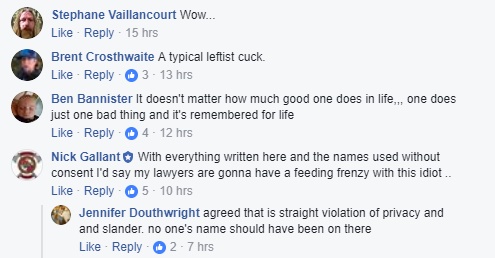 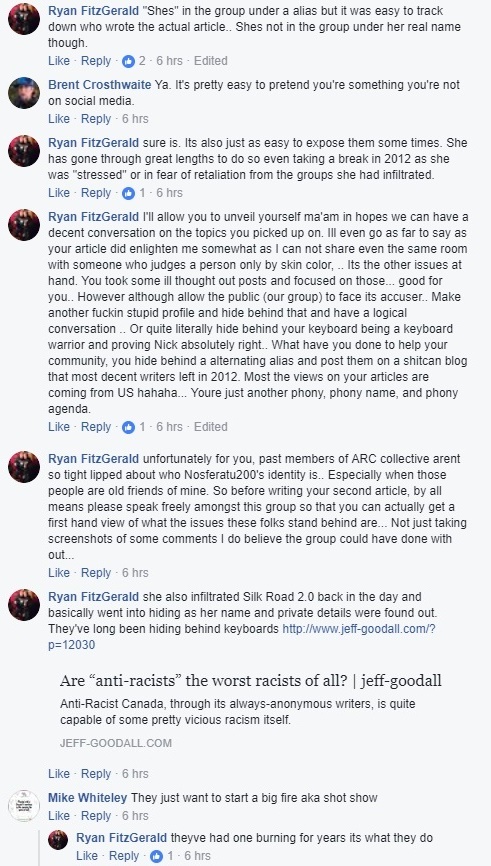 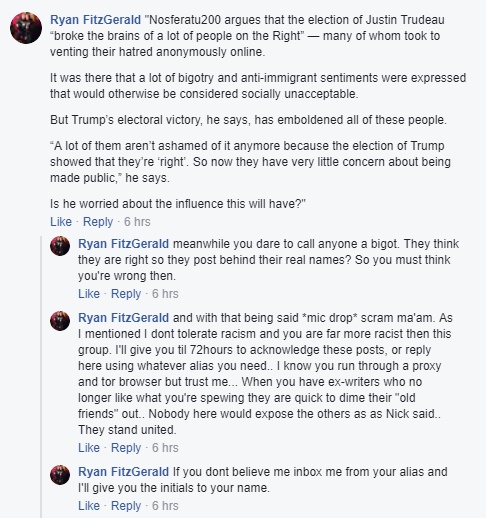 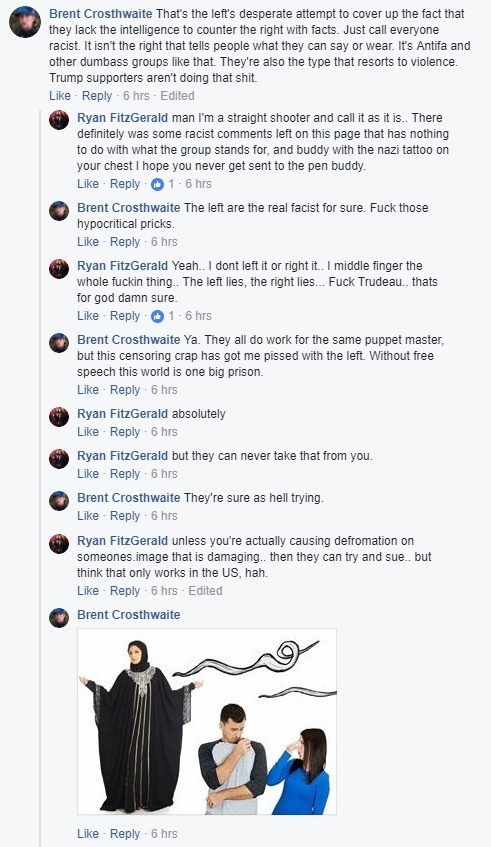 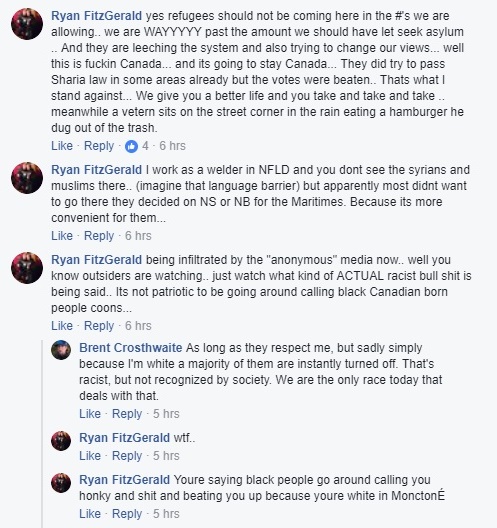 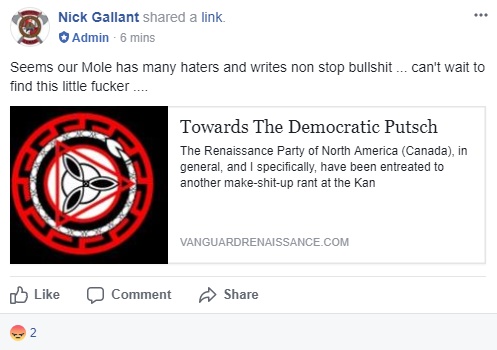 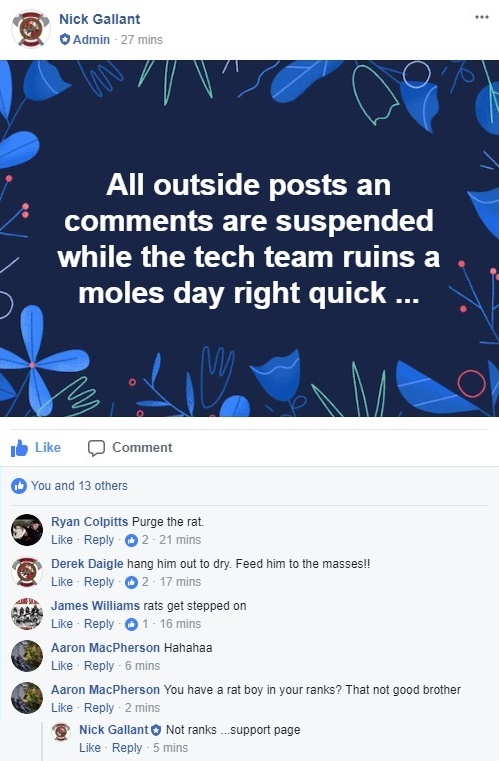 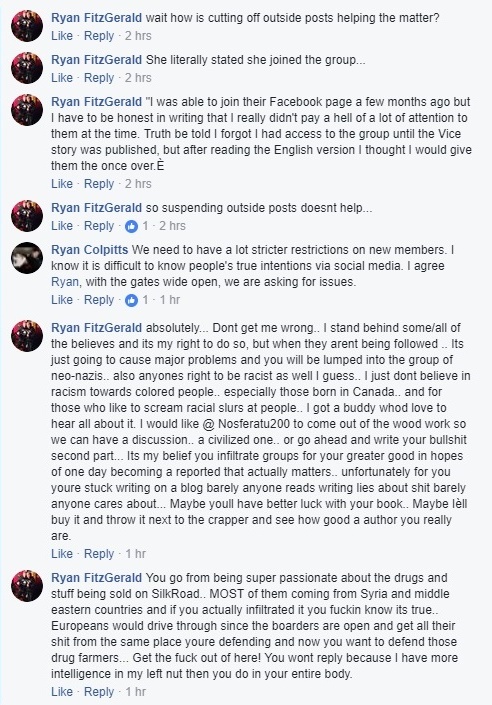 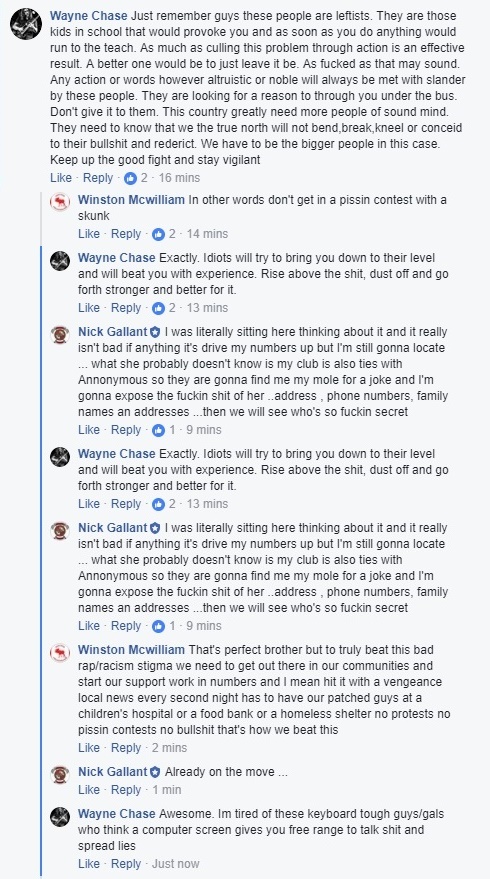 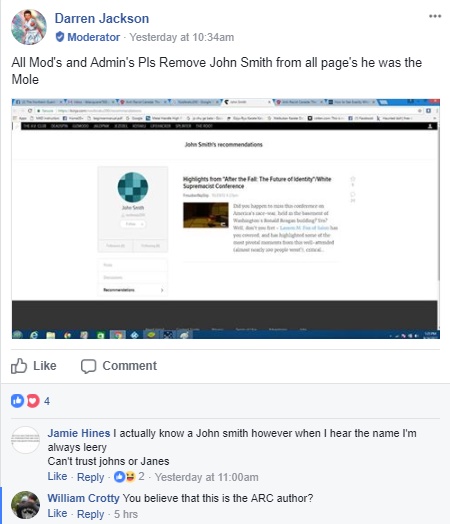 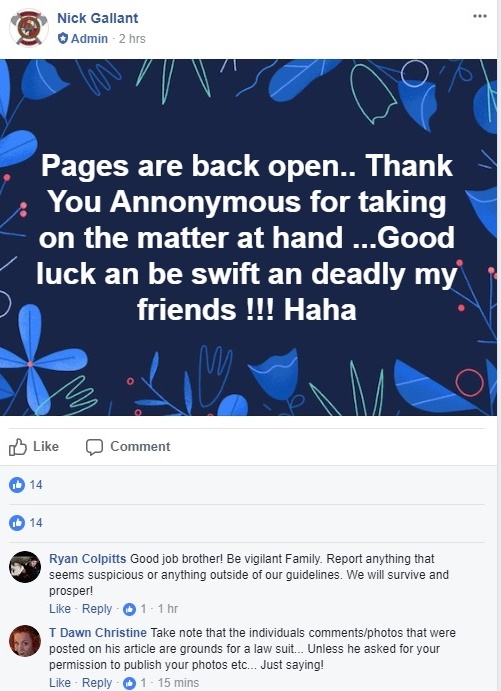 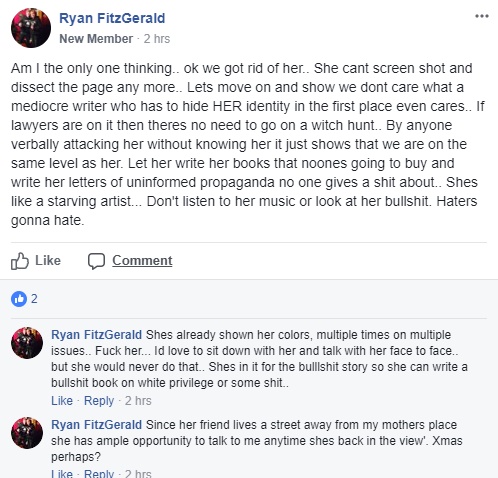 It shouldn't have to be mentioned that none of the above is correct either.

You know who I feel the worst for?

Sure, he's proven himself to be an incompetent bigot who couldn't lead a dog on a leash who is MIA more often than not allowing his group to fall apart, blames others for his own lack of foresight, and seems incredibly lazy.

Wait, what was my point?

Oh! Right! Why I feel bad for Nick Gallant!

I feel badly for him because he has supported Ronny Cameron so much. He's appeared on Cameron's live videos a few times and urged Northern Guard members to support Cameron's Facebook page intended to promote him: 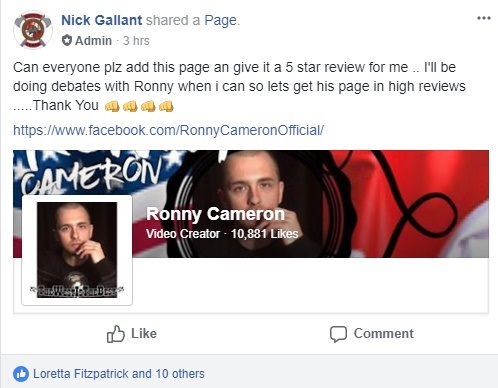 And now Cameron repays Gallant by hosting one of the people who contributed to a chapter breaking away citing Gallant's lack of leadership as one of the contributing factors.

"...it has been my experience over the past ten and a half years that the novelty does wear off and on inclusion on the ARC blog has a tendency to make one's life much more difficult over the long term."

Why the hell are you trying to ruin these people's lives then? Oooh Ronny said something controversial, let's crucify him! He's actually a very nice and reasonable person. Maybe you should extend an olive branch to a couple of these right wingers, they seem open to dialogue. Some of them are obviously too far gone but you should reach out to the younger ones and help them, not instigate mob violence against them.

You will have to check the loading of your videos to the page as I just get "invalid parameter" when I click on them.

I see Jeremy Clarke in that picture, just look for the shortest one. You can expect him to soon start wearing heels but in a very manly way of course.

Anon 1: I'm simply documenting what horrible people they are. If their own words "ruin their lives" then that is just the result of their own poor decisions. Freedom of expression does not mean freedom from consequences.

Anon 2: I'm hoping the videos work for you now. If they don't let me know and I'll try something else.

ROCKET7: Nope. No soup for you!