Steven Myatt, Like Most Authoritarian Personalities, Doesn't Think His Motives Should Be Questioned By Mere Plebs

A couple of days ago ARC came into possession of Steven Myatt's petition that outlines rationale (such that it is) for having Justin Trudeau charged with treason because, you know, that's how he thinks this works. In what will come as absolutely no surprise, it is for all intents and purposes, a cobbling together of far right memes, outright lies and xenophobic fear mongering pretending to be a serious legal challenge: 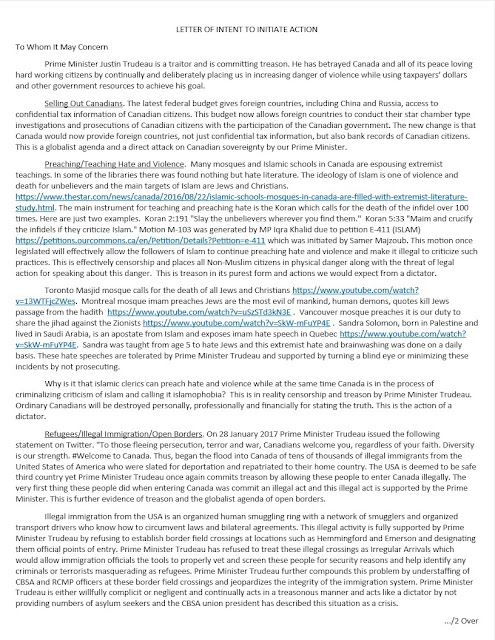 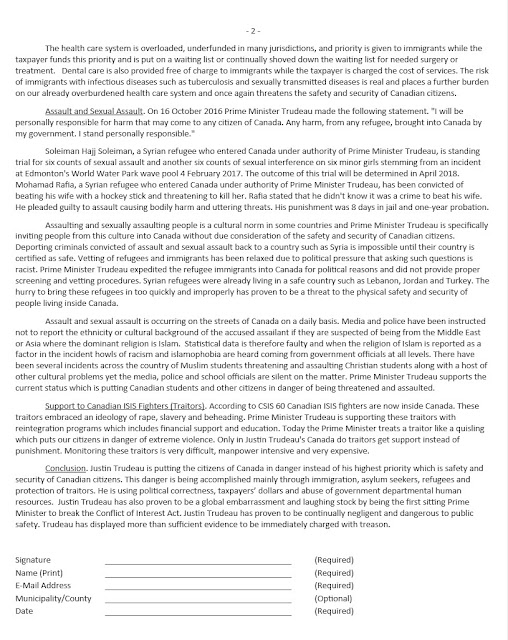 There's a lot here to pick on. For example, the claim that Trudeau said "[he] will be personally responsible for harm that may come to any citizen of Canada. Any harm, from any refugee, brought into Canada by my government, [he will] stand personally responsible" can be found on memes all over social media and is being shared by Islamophobic and xenophobic groups and individuals.... but it isn't actually something that Trudeau said. And of the now over 45,000 refugees, Myatt can find examples of only two assholes who were both arrested and tried as evidence for his claim that we are all in danger? Holy hell! If that's the case, the crime rate among refugees is so much lower than that of other Canadians that maybe we really should consider replacing Canadians with refugees?

Anyways, I'm not going to bother dissecting this any further because it is sort of low hanging fruit. Still, though he has been lionized by his increasingly cult-like followers, it appears that not everyone has consumed the Flavor Aid: 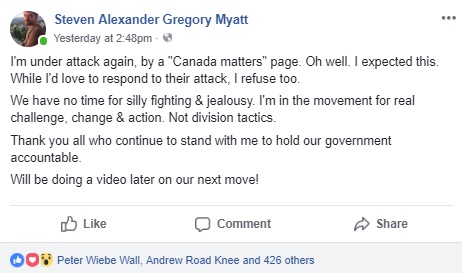 "Canada Matters" is another anti-government and Islamophobic Facebook group claiming the status of "patriots." In a word, they are just as ridiculous and xenophobic as Myatt and his followers. There are quite a few ego-stroking comments, but these two are the ones I thought to be the most interesting: 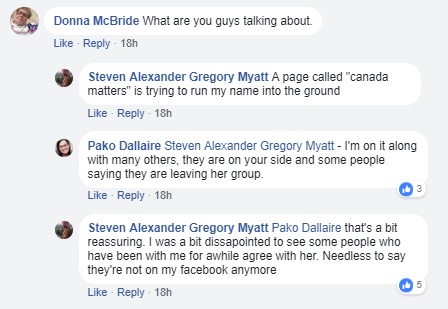 My goodness, these people are so bloody sensitive! And why is it that I can't help but thinking of this when I read both Myatt's pouting and Kelly Elizabeth's response to a reasonable question?

Myatt and his followers have themselves a little bit of an authoritarian streak going.

This is what resulted in Myatt getting all hot and bothered:

Now while there is still a whole heaping helping of buffoonery on the "Canada Matters" page, this actually represents at least a modicum of sanity (I mean, all things being relative when looking at these groups and individuals as a whole). Aside from the comment regarding Myatt's employment status -- and if it is true then maybe he might consider spending his time with more productive activities such as looking through want ads -- Dena Gallant has posed some questions one would think people getting behind Myatt's efforts might wish to consider and have him address. These observations and questions certainly can't really be characterized, as Myatt has, as an attack on his character. Surely no person could over react to this rather tepid criticism? 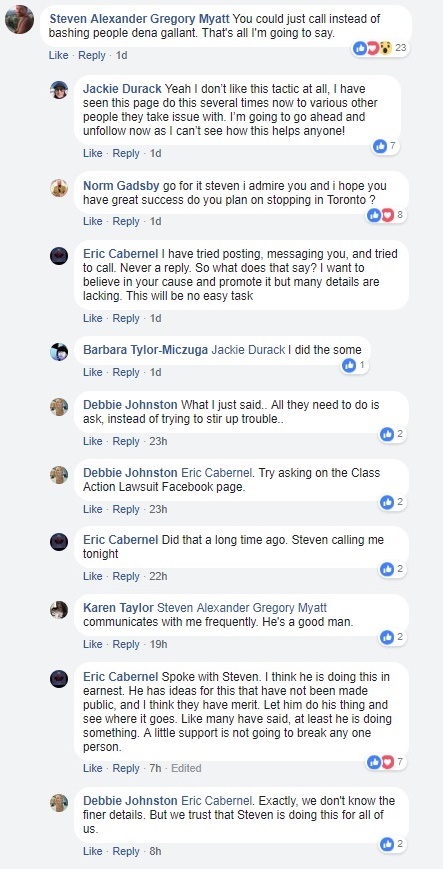 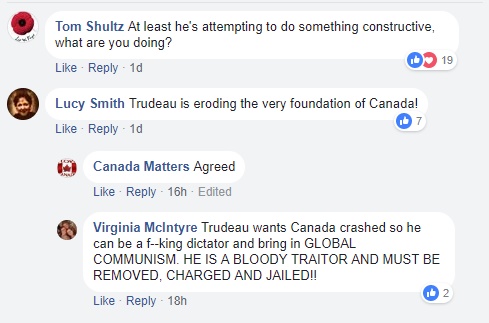 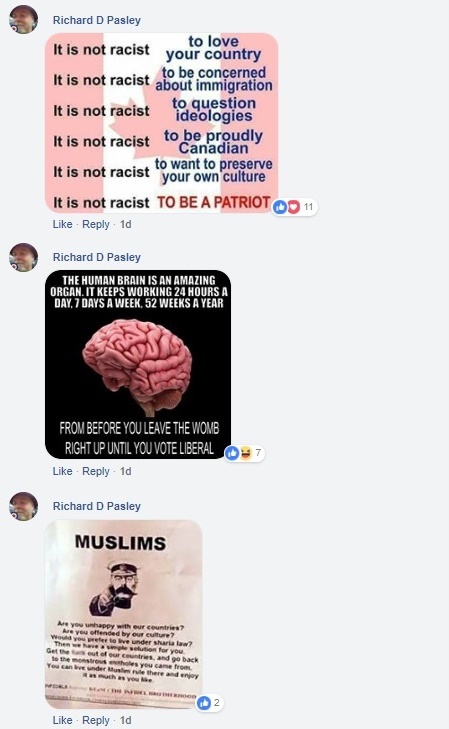 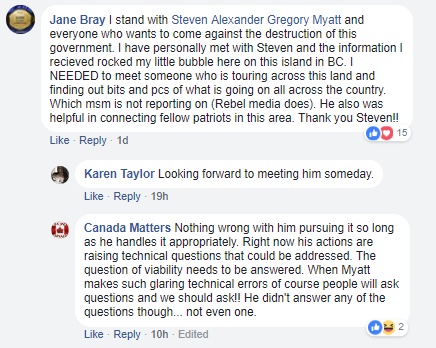 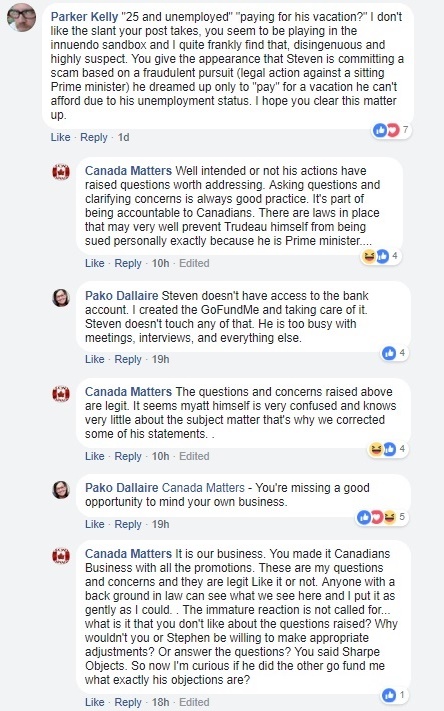 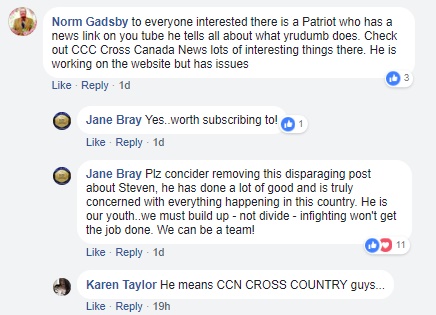 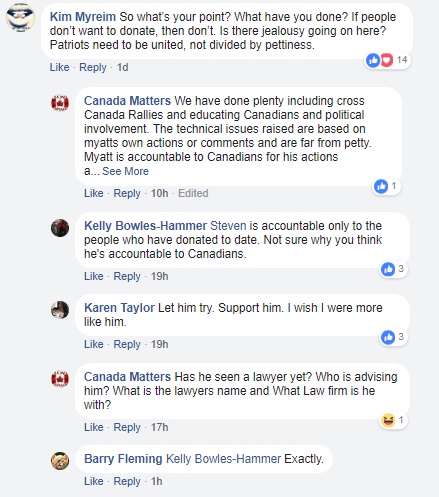 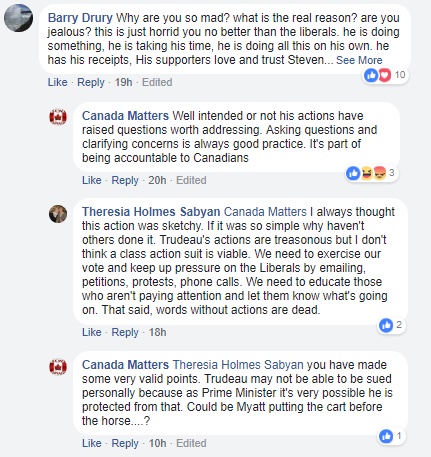 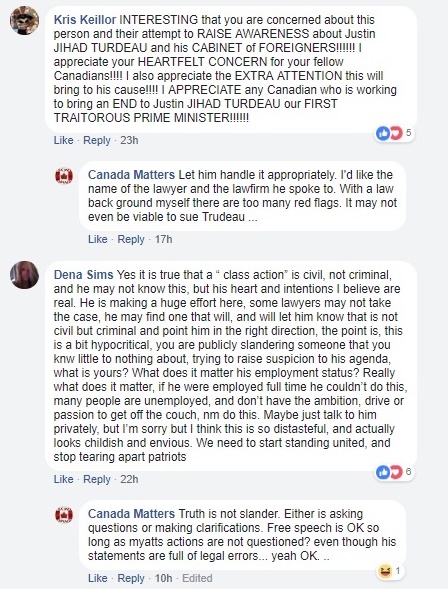 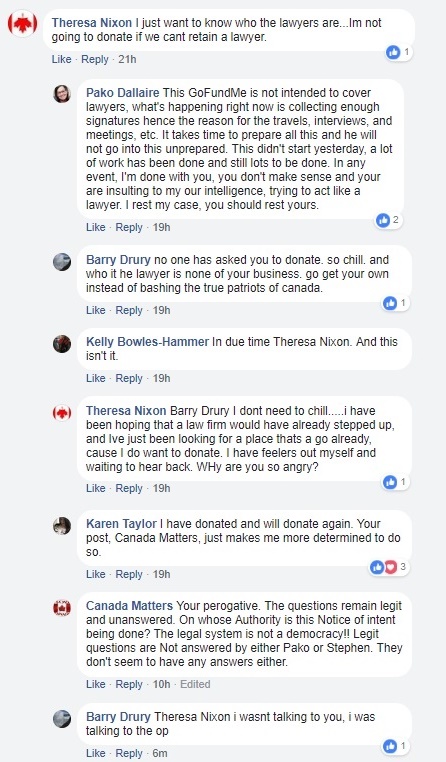 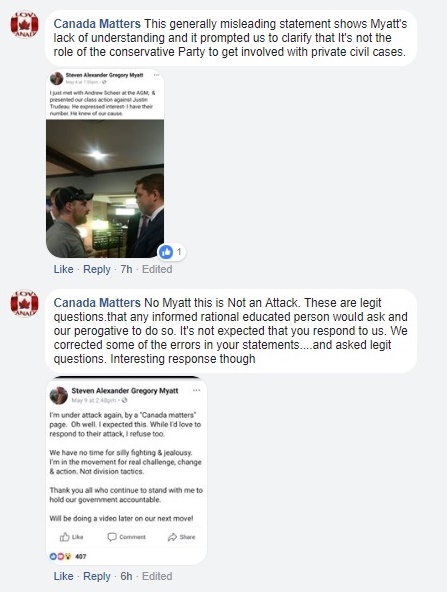 Email ThisBlogThis!Share to TwitterShare to FacebookShare to Pinterest
Labels: Myatt

Good Job to both the Right and Left for Seeing through this Crazy situation taking monetary advantage of Concerned Canadians. I hope Stephen's blind,uneducated, cult like sheep take the blinders off and find reality again. It was nice to see both right and left working together for reality. Just like the good ole days. Now Sheep get out of your daze! WAKEY WAKEY