Annyyyyways, it seems that the threepers are starting to catch on to the reality that they are being watched: 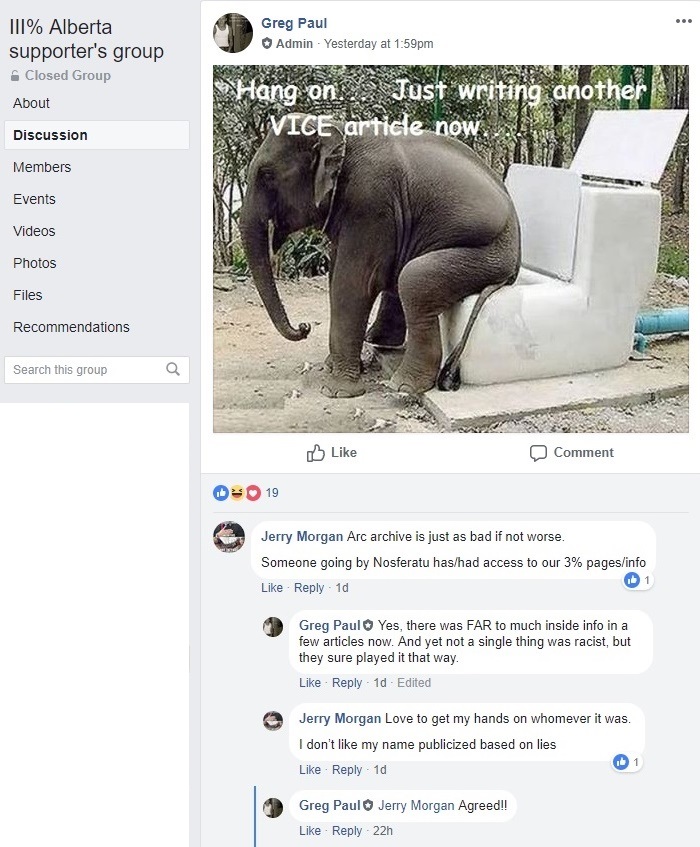 First, it would be accurate to write "has" access. Hi Jerry!

Second, I'm not quite sure what Jerry Morgan thinks he would do if were to get his hands on me, but I hope it involves an offer of a neat, though slightly chilled, Glencairn scotch.

Last week when news emerged that a woman had verbally attacked a group of men in a Lethbridge Denny's whom she assumed were Syrian, berating them for speaking a language other than English and telling them to, "go back where they came from" among other things, most Canadians were disgusted. However the people ARC covers celebrated and hoped to see more of the same. I didn't post an article on it because really it was what we've all come to expect. Bigots like Kevin Johnston devoted two videos to claiming the men were really the racists and that the woman was the victim. Others claimed that she said, "what everyone is thinking" or that she was set up or that they started it or George Soros other explanations to excuse and justify her behavior.

Oh, and they are certain that Justin Trudeau is ultimately to blame.

While I didn't talk about the story much here, I did post the comments by Alberta threepers in another article which really are representative of both their views and that of other paranoid racist Islamophobes in the country: 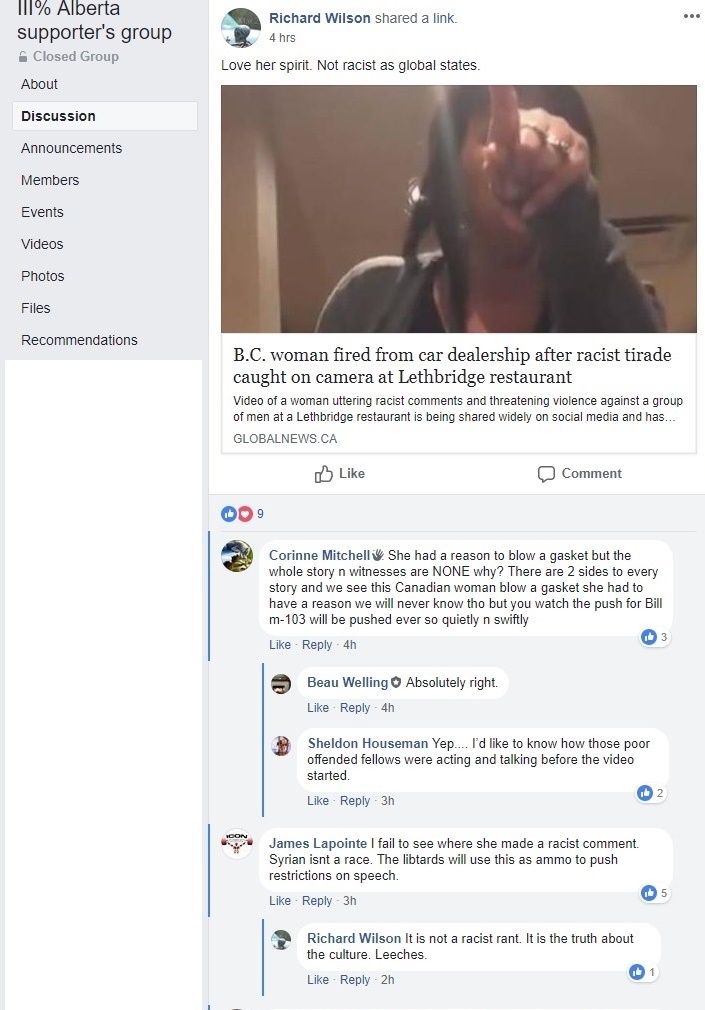 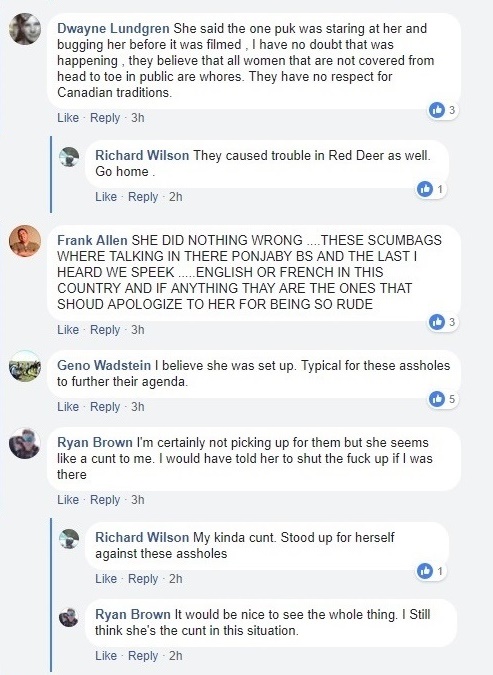 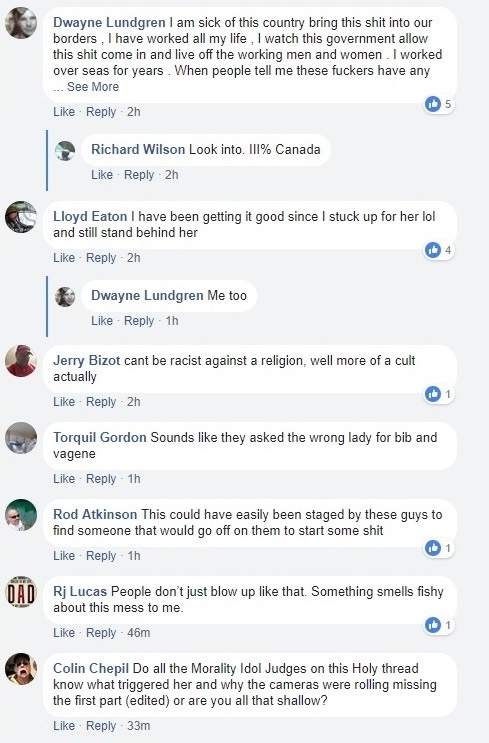 Pretty standard by this point.

Today threepers posted an article referring to the Lethbridge story from "Debate Post" which sometimes twists real news into something of a caricature of the original story or provides incredibly biased material as if it is legitimate: 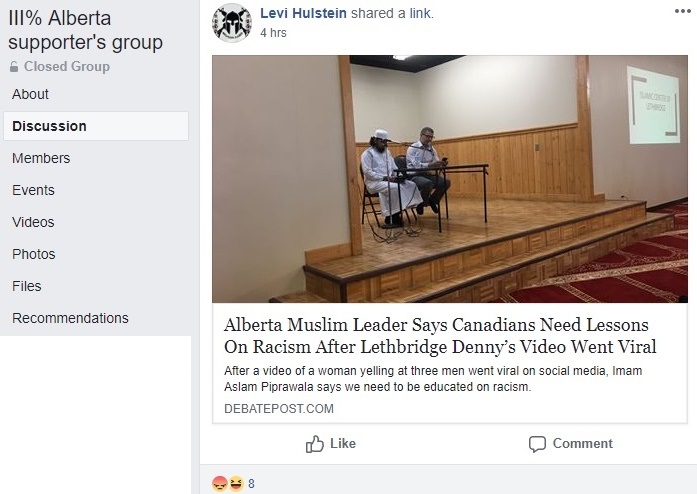 Truth be told, if this "Muslim leader" did say this, I would agree with him. In fact I believe that all schools should be open to discussing racism in Canada as a means of creating a more equal and equitable society. The article I found certainly wasn't at all controversial:


An Islamic leader in Southern Alberta is calling for education and dialogue following the video of a woman spouting racist remarks at a group of men at the Lethbridge Denny’s restaurant.

Imam Aslam Piprawala welcomed dozens as the Lethbridge Muslim Association opened the doors to its new mosque and Islamic centre on Saturday.

“We hope that through what we are teaching in this new centre, through our explanation of the religion … we will explain to people that we are human and we are nothing but human.

President of association (right) says they are hoping to make the centre an educational centre for young people - teaching them true teachings of Islam & pull them away from extremist views. Also a place to bridge the gap for non-Muslim people & teach them about the faith #YQL pic.twitter.com/kqnVFttQBD
— Kyle Benning (@KBBenning) May 12, 2018


But the threepers sort of take things personally and interpreted the story, which was likely an intention of the folks at "Debate Post", to paint all Canadians and themselves personally as racists.

They proceeded to engage in an histrionic fit about how they aren't racist.... by basically being the racists that we've seen them to consistently be throughout their existence as a group: 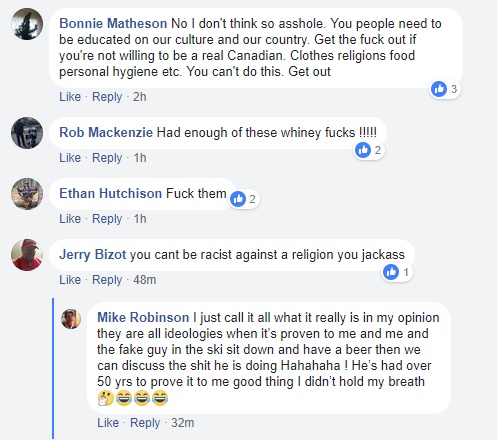 Now though all the comments are, shall we say problematic, one was called out not because it was horribly wrong but because it made the threepers look bad: 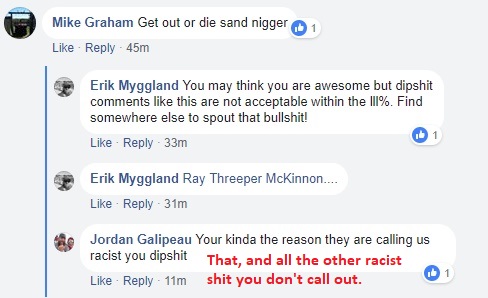