It has been a while since ARC last wrote about Mark and Connie Fournier of the (not so) dearly departed Free Dominion. While ARC certainly had a rather contentious relationship with the denizens of Free Dominion (they even inspired ARC's "History of Violence" article), their defamation of Mr. Richard Warman is what ultimately led to their precipitous downfall as the Fourniers and co-defendants lost a defamation suit to Mr. Warman.

The Fourniers decided to appeal the decision and attempted to crowdfund their effort which resulted in some rather interesting support:

Though the writing was on the wall as others who had defamed Mr. Warman settled and apologized, the Fourniers stubbornly soldiered on.

Since then it seems that Mr. Warman has spent at least some time trying to get Mark and Connie to pay the damage and costs, but they seem to be rather recalcitrant. 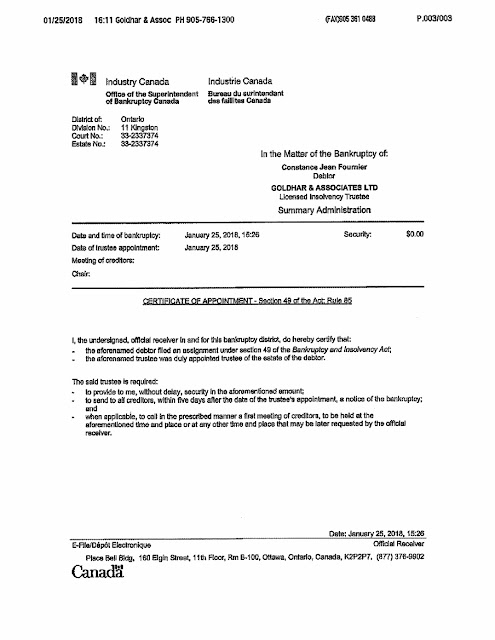 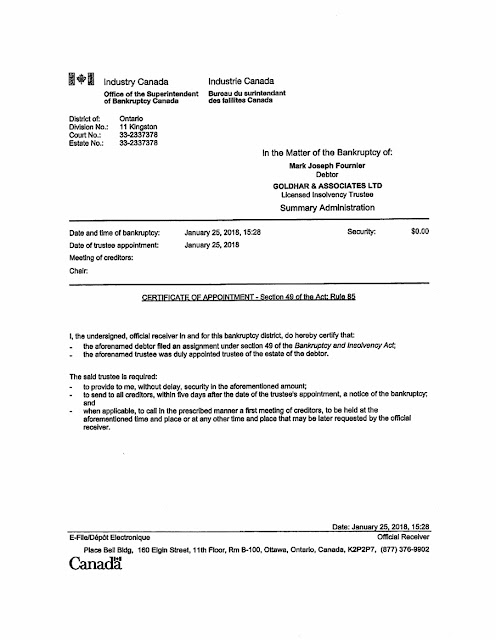 Mr. Warman posted the following regarding the declaration of bankruptcy:

I suppose that as between honouring the payment plan they agreed to or bankruptcy, it had to come to this.

As readers may recall, Connie Fournier and Mark Fournier published defamatory attacks against me through their website forum Freedominion (RIP). I asked them to remove the material and while they initially did so, they then refused to remove further defamatory material that was posted by their users or themselves.

I sued them for libel. The Fourniers demanded a jury trial and their day in court. After a three-week trial, the jury found the Fourniers and their fellow defendants had defamed me and awarded me $42,000 in general, aggravated, and punitive damages. The judge also ordered the defendants to pay me $85,000 in legal costs.

The Fourniers agreed to pay me the jury’s award of damages and costs at a rate of $500/month. They made 2 payments but then there were always reasons why they couldn’t pay the next month and then they just went silent. It wasn’t like they weren’t earning income – at the first judgment debtor exam, they estimated that Mark’s income from truck driving earned them $30,000-$50,000 per year. For her part, Connie had been voluntarily or otherwise unemployed or underemployed for years despite advertising herself as a computer programmer.

Tired of waiting for the Fourniers or Godot to show up with the money they said they’d pay me, I recently arranged for them to attend a new judgment debtor examination where my lawyer would ask them why they hadn’t honoured the payment plan they agreed to and they would produce all of their financial records showing their ability to pay the judgment.

Now if Mark and Connie thought that this would means to avoid any legal obligations, there is some very bad news for them:

Instead of attending the examination they agreed to they decided to go bankrupt instead. They have the legal ability to do that, but the Courts have said repeatedly that people who try to take advantage of bankruptcy protection to avoid paying civil judgments against them shouldn’t emerge from bankruptcy until they’ve paid at least 1/2 of their outstanding debts. Given they owe in excess of $100,000, Connie Fournier and Mark Fournier have likely condemned themselves to a lifetime status as bankrupts.

However, Mr. Warman does include a postscript that may, if the Fourniers take up the offer, might help them to get out of the hole they have dug for themselves:

NB – The Fourniers were always successful at crowdfunding money to support their defence. I’d be happy to endorse or run a similar campaign now in their hour of need to pay off their debt and would donate all the money raised to charities or non-profits. I would also deduct an equivalent amount from the 50% of their outstanding debt to me before I would no longer object to them emerging from bankruptcy. The Fourniers and charities/non-profits would benefit – sounds like a win-win. Ball is in their court.

So we'll see what happens.

What I do know is that I have better taste in music than Mr. Warman: