Back on June 3, 2017, a number of anti-Muslim protests occurred in Canadian cities across the country; most of them were dismal failures that attracted substantially more counter-protesters than Islamophobes. One of the events which really has to be considered to be a failure was "One Million Canadian March Against Trudeau" on Parliament Hill which, rather than featuring the million people advertised, may have had fewer than 130. In fact a group yoga session that occurred a few hours before attracted substantially more people.

Among those who did show up in Ottawa was a the shamelessly self-promoting anti-Muslim YouTuber, perennial Mississauga mayoral candidate, and provocateur currently up on hate crime charges Kevin "Poodle" Johnston. In fact he arrived in Ottawa a day before the rally, spending much of that time posting messages and photos on now suspended twitter account trying to antagonize anti-fascists: 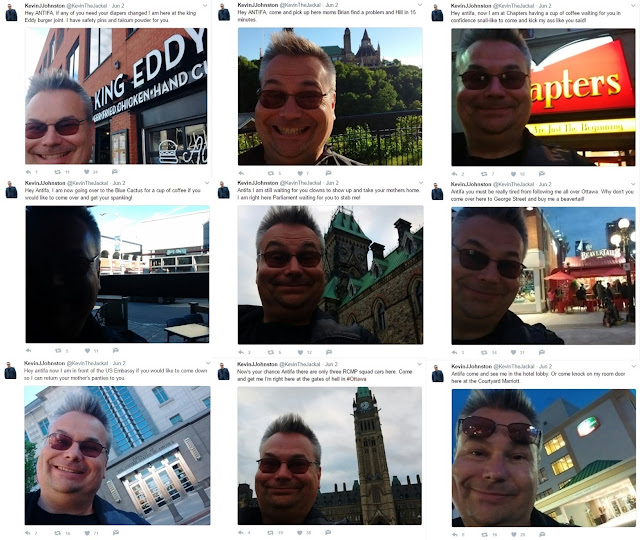 It seems that Johnston was determined to try and cause an incident. On the day of the protest, there was some sort of confrontation as Johnston appears to have actively sought out counter-protesters. He later posted the following which he claimed resulted from that encounter: 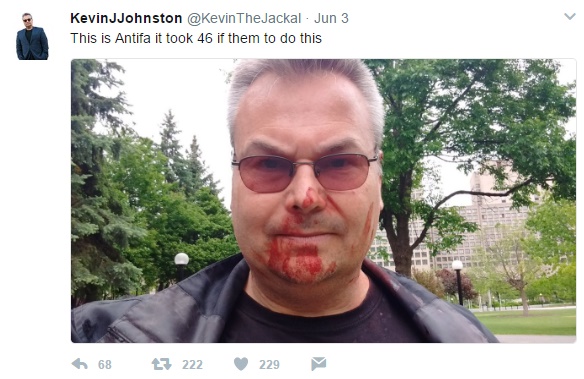 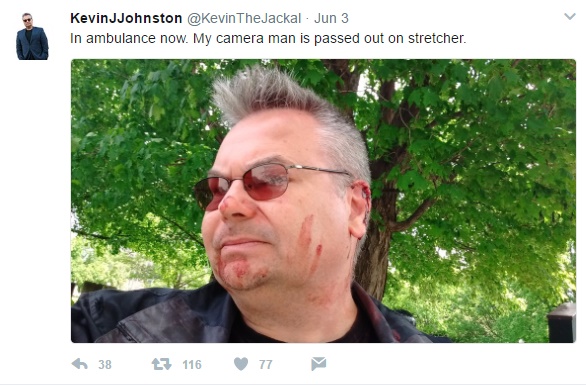 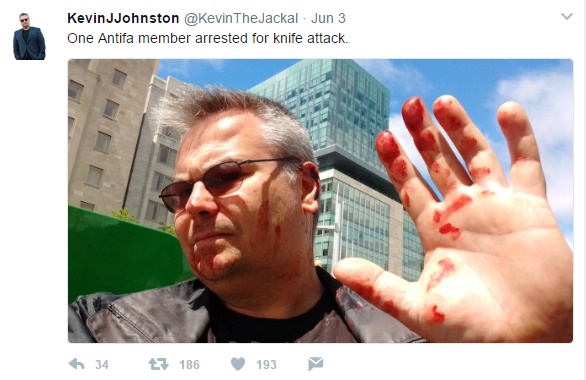 Johnston's claims, many of which were promptly disputed by the police, immediately failed the smell test. For example, Johnston claimed that one of the people who participated in the alleged assault against him was journalist Kevin Metcalf. Metcalf has become a bit of a bogeyman in Islamophobic circles and is fairly easily identifiable at this point. Johnston claimed that Metcalf had stood by taking video of the alleged assault against him and his partner: 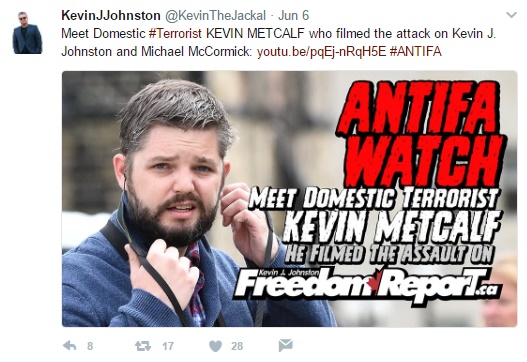 The problem is that this claim was verifiable false as Metcalf was conducting interview as well as being interviewed in a different, and distant, location with reliable witnesses conforming this to be the case:


One man Johnston targeted is Kevin Metcalf, a member of Canadian Journalists for Free Expression, who says he was at the Hill protest as an observer, shooting pictures and video of people at what was billed the “Million Canadian March.”

Johnston posted a video Tuesday showing Metcalf’s picture and called him “a coward, domestic terrorist and stalker of women.”

“If you see this man, you have to assume he is armed,” Johnston told his followers. “We have to get this guy behind bars, people. Get him behind bars now.”

Metcalf says he was on Parliament Hill conducting interviews around 11:30 a.m., the time it’s alleged Johnston was assaulted in Confederation Park. He says he’s considering legal action against Johnston over the online video.

Journalist Evan Balgord also noted in his article a number of other inconsistencies in Johnston's allegations, including the use of a knife: 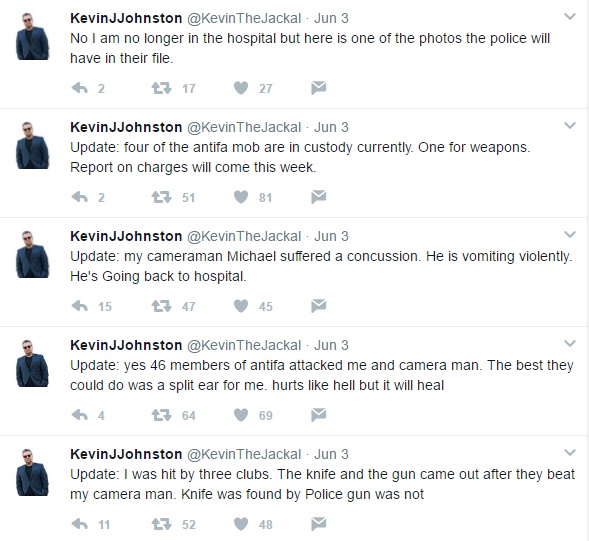 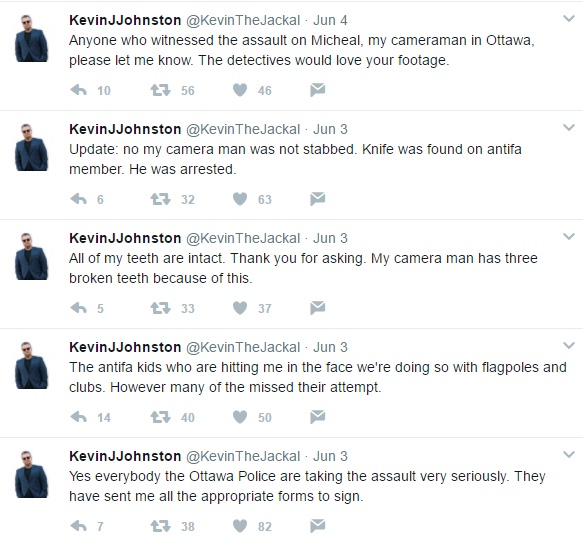 
Johnston originally reported on Twitter that he was the victim of a knife attack. But Sergeant Hrabchak of the Ottawa Police Service tells CANADALAND that there was no knife attack. “We don’t have any information of that,” says Hrabchak. “None whatsoever. We’ve got one victim, and he’s not even being cooperative with us now.”

None of these contradictions prevented the Islamophobes who support Johnston from rallying to his side in support and making threats towards those whom they claimed had targeted him: 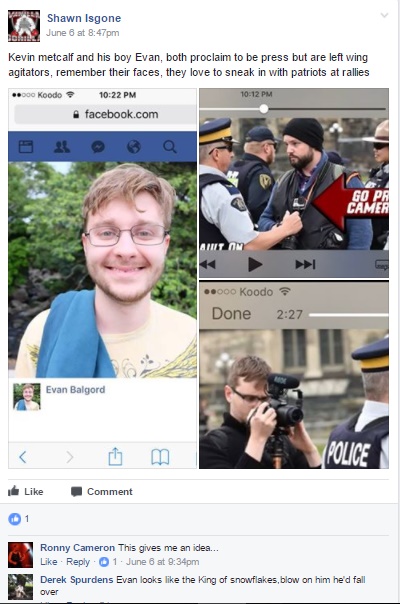 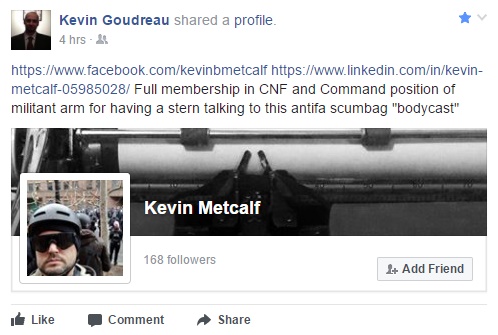 Well, a funny thing apparently happened yesterday as reported by a friend who has been following this case and reported on ARC's twitter account:

Interesting. Not entirely unexpected, but interesting.

Since reports that an 11 year old child had not been truthful about an alleged Islamophobic attack against her, the bigots that we've been covering have been apoplectic, some demanding charges filed against the child, her mother or both, the deportation of the girl and her entire family, an apology from the Prime Minister for having the audacity to suggest that attacking a child is wrong, and claiming that ALL attacks that have been committed against Muslims past and future have been lies.

Now, if they are to be logically and morally consistent, shouldn't that same anger be directed towards a middle-aged man who may very well have provided a false report to the police about being attacked by "antifa?"

Don't bother answering that question. It's sort of a rhetorical one.

As far as this writer knows Johnston has not yet responded to news about the Crown dropping assault charges. Currently he is on his way back to Canada after having spent about a week in Burma in the guise of a "journalist" and where he spent much of his time demonizing the Rohingya, a Muslim minority currently facing severe persecution and potential genocide at the hands of the Burmese state and military.

Actually, his presence in Burma is also interesting, but that is a story for a different time.
Posted by Nosferatu200 at 20:33