One of the bits of news that struck as interesting is how little boneheads are talking about McKee's release. Sure, Marleau posted a message on the Blood and Honour forum's "POW" section (as of this article's publication, the thread had no responses and had been viewed by 19 people) and the folks on Nexopia posted a link to our blog, knowing Natalie S. and Marleau would see it, but that was pretty much it. Very little was mentioned initially. In fact, McKee's release seemed so unimportant that they didn't even bother mentioning it on the Aryan Guard forum: 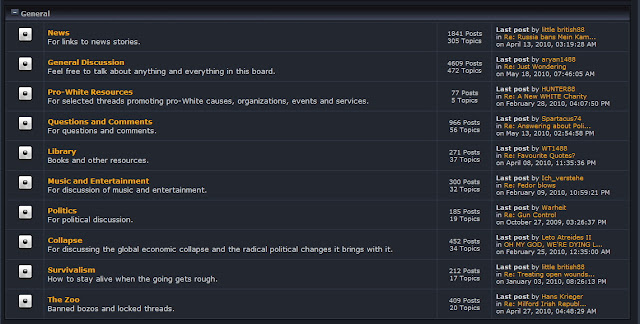 The most recent comment was posted yesterday, but it has nothing to do with McKee and his release. When we enter the subforum, we notice that the last thing said concerning McKee was almost a month ago: 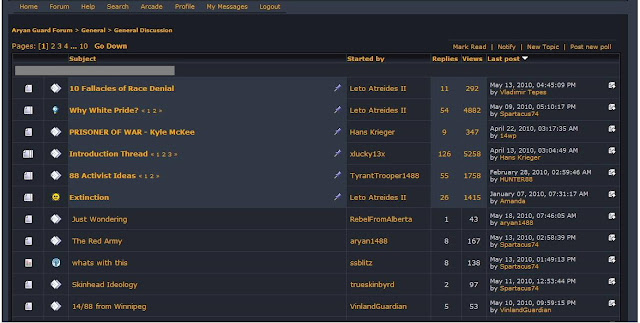 One might think if the leader of your gang was released from jail with murder charges being dropped, someone might mention something about it on the gang's forum. We guess this is yet a further indication that the Aryan Guard is all but dead (leading us to wonder what McKee will be doing now that he's out, though that's an issue for another day).

Even on Stormfront, the premier White Supremacist website, nothing was mentioned until this afternoon. However Paul Fromm decided to post the good news roughly 24 hours after it was made public:

Wait. Back up. Did Paulie just refer to McKee as a political leader?

Oh, this is going to be good:

We can't help but notice how Paulie sort of glosses over and ignores some relatively important parts of the McKee story here (much like he failed to mention some uncomfortable facts about Michelle Erstikaitis whom he tried to present as a persecuted White Nationalist). Let us take a bit of a closer look at what Paulie has written:


Last November 21 the story broke. Some sort of explosive devices had been left outside the residence of two former associates of the White Nationalist Aryan Guard in . One of the residents of the home, a woman seriously on the outs with the Aryan Guard, claimed to have seen (in the dark?) the individuals who had planted the devices and named then as a 17-year old and Kyle McKee, leader of the Aryan Guard.

Well, given the time that it occurred, we're not so sure it was as dark as Paulie seems to believe, but we can give him a pass here. We continue.


So, with press heavy breathing about attempted murder, bombing, White supremacy, etc., a manhunt began,. The 17-year old was arrested in on a bus heading home to . Kyle McKee, knowing police had been gunning for him for months, eluded capture for more than a month.

Let's see. We're willing to bet that had Paulie found two pipe bombs on his front step, he might be a bit concerned as well and would, no doubt, be blaming the ARA or SHARP or any other group with little or no proof to verify this accusation. And why exactly was there a manhunt? Oh, that's right. The Calgary Police were out to get poor little Kyle McKee. So Paulie thinks that "eluding capture" and at one point speeding away from the police officer in Saskatchewan who ran his plates is justifiable?


From the beginning, we had problems with this story and held our silence. Kyle McKee is a charismatic and talented young man. He forged one of the strongest WN groups seen in for years. Frequent marches put the group on the map.

What exactly is McKee talented at again? And charismatic? Well, if convincing teenagers to join your gang is your concept of charismatic, we suppose you might have something.


I've been around long enough not to discount an intelligence operation by police or others to disrupt or destroy the Aryan Guard -- it was done to the Edmund Burke Society in 1971-1972 and to the Heritage Front by CSIS, using super sleuth (or, considering his weight gain is it super sloth) agent provocateur Grant Bristow in the early 1990s.

Ah! It was all a police frame up! Those dirty rats! Trying to railroad the fine, upstanding youth involved with the Aryan Guard. Youth who have been repeatedly arrested for assault, vandalism, attempted murder (two counts now), weapons charges, and a host of other crimes.


There had been some internal problems within the Aryan Guard.

Sort of like the Titanic having a problem with buoyancy.


Certainly, not all problems are the result of the long arm of the state. And some suggest that, at times, some members did more drinking and partying than politics. Not everything is a conspiracy. Yet, ....

Should we provide the link to the sex tape fiasco? Oh, we just did. And of course there's also this picture: 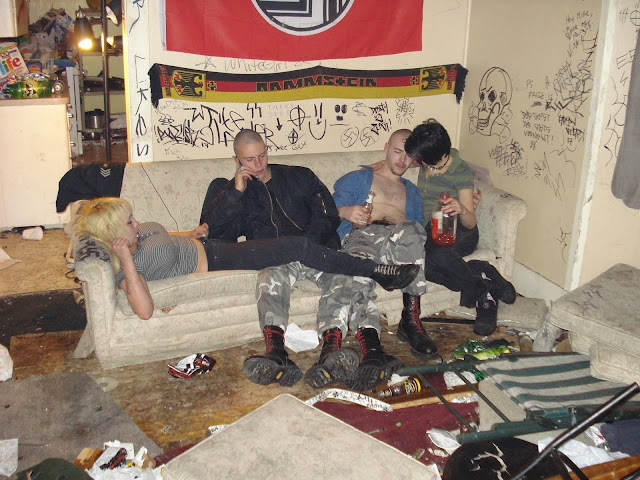 Ah, we never get tired of looking at this photo.


We had trouble believing as sensible and savvy a person as Kyle McKee would involve himself in some half baked amateur bombing attempt, knowing that the ensuing legal problems would keep him in jail or out of action for months or years.

Okay. Stop. You have trouble believe that, "sensible" and "savvy" Kyle McKee would be involved in an amateur bombing attempt?

And here we see how Paulie simply ignores a rather significant piece of information. Kyle McKee plead guilt to possessing materials used to make pipe bombs and apparently had some either made or at various stages of construction. Now, we can talk about whether or not this alone was enough to convict McKee of the crime of attempted murder, but one thing Paulie can't do, simply because McKee admitted his guilt, is ignore that McKee did commit a crime. He was sentenced to prison time but given double credit for his time spent in the Calgary Remand Centre. He is on probation for a year and is not permitted to associate with certain people.

Does this sound like someone who is sensible or savvy?


Accordingly, we interviewed knowledgeable people, urged people to write to the two prisoners and bided our time.

's sclerotic and politically biased system is loath to give dissidents, even letter writers like Brad Love, bail.

Keep in mind McKee and the then 17 year old youth were not in jail because of their political beliefs. They were in jail because another White Supremacist told the police that McKee and the 17 year old left two pipe bombs at the residence of his then girlfriend, one of which went off, which could have been lethal. Unless Paulie is going to claim that pipe bombs are a form of political speech, then it might be a hard case to make that McKee was a dissident being held due to his opinions.

And so Paul Fromm continues to present a distorted image of a group who's membership have been implicated in numerous crimes, now including the building of explosive devices. Others include:
And more.

Or does Paulie support whoever is footing the bill?
Posted by Nosferatu200 at 18:07

Yes. Paul supports whoever foots the bill. That is an fair and accurate statement.

I thought that Fromm WAS the one footing the bill. Certainly isn't the unemployed slobs that make up most of the "movement".

aww, i only just noticed now, being also never tired of that pic, that on the wall behind his head is written 'ARC Gay', how sweet.

Having read your articles for some time now, didn't you guys post some of the WN reactions to Kyle getting arrested, where Paul Fromm passed off as not really "knowing" Kyle? It is funny that he is all of a sudden so willing to stand in the kids corner now.

Most "public speakers" don't foot thier own bill for transportation or hotel stays.

And no, Paul Fromm doesn't cover his own expenses.

Fromm is an asshole.The only ones willing to listen to his babble bullshit are lost little kids that haven't figured their way in life yet.It's a shame really.I wonder what he's going to do now that his so called wife isn't going to help him financially anymore.Oops what was i thinking!!!!!!!LOL.I suppose there will always be some other poor lost soul he can latch on to.

The aryan guard is washed up.
Who is even aryan guard anymore.
Hard to respect a "leader" who complains to a newspaper about being cold LMAO
The aryan guard are the MOST embarrassing group in Canada.
Led by a short skinny runt who cant cut it in jail. PC just like that bitch bill noble.

"The aryan guard is washed up".

The Aryan Guard was washed up the moment they were conceived.