ARC previously reported that Soufi's, the downtown Toronto eatery whose owners, the Al-Soufi family, were facing an endless barrage of death threats, announced they were closing due to the harassment.

In a positive turn of events it was then reported that with the help of Toronto businessman and philanthropist Mohamad Fakih the restaurant would re-open, with Fakih and his team at Paramount Fine Foods taking over management while the family could take some time away.

Mohamed Fakih, the owner of Paramount Fine Foods says he will be supporting Soufi’s restaurant until the family feels comfortable to come back to work. All the profits and ownership will remain with the Al-Soufi family. @CityNews
— Adrian Ghobrial (@CityAdrian) October 110, 2019

Now, to truly understand the harassment campaign that caused Soufi's closure it needs to be understood that it didn't begin at the PPC Mohawk College event. It actually started almost 2 months prior.

The harassment started when Yellow Vests Rick Boswick and Lily filmed the Alsoufis son illegally in a courthouse a month ago and published it on YouTube, identifying the restaurant in the comments and other videos. https://t.co/nIUewHQysK
— Kevin Metcalf (@kbmetcalf) October 10, 2019

2) Lily made a video alleging that 'ISIS terrorists ran a restaurant' and that the food might be tainted. Boswick republished the original video she took.
— Kevin Metcalf (@kbmetcalf) October 10, 2019

3) the Alsoufis son was in court to monitor the progress of my existing criminal complaint against Boswick for uttering threats.
— Kevin Metcalf (@kbmetcalf) October 10, 2019

4) this started as a transparent attempt to intimidate a victims supporter. Filming in a courthouse is against the law, section 136 of the courts of justice act. Hello, Tommy Robinson?
— Kevin Metcalf (@kbmetcalf) October 10, 2019

In August, the eldest son of the Al-Soufis attended a court date of Rick Boswick's, where Lily and Boswick filmed him in the courthouse (which is illegal.) On August 22, Lily from Hamilton posted a video in which she states:

They’re fucking ISIS militants. Former militants . . . You come here. You have a plan. You don’t like Christianity. Okay. You want to wipe out Christianity. You want to turn this country into Sharia law . . . we know everything, where you located. And we want Canadian people to know if you order food from [address], you are supporting terrorists. Did you know that they send money back home and Canadian soldiers die in Syria, Afghanistan, Iraq. When you go to that restaurant [address] you’re supporting terrorists.

In addition to the above racist screed, Lily confirms that they filmed the man in the courthouse. While we won't share the entire video due to her stating the address of the restaurant multiple times, here is a clip:


Just prior to the launch, Lily posted a video where she accused the Al-Soufi family of being coached by the Muslim Brotherhood to lie and say were receiving threats:


Fast forward to this past Friday, when Boswick, Lily, and Ed Jamnisek (of Northern Guard) went to Soufi's on the day of their re-opening. Both Boswick and Lily posted videos of the exchange (Lily posted 2.)

The following are screenshots of Lily's uploads, to show their titles: 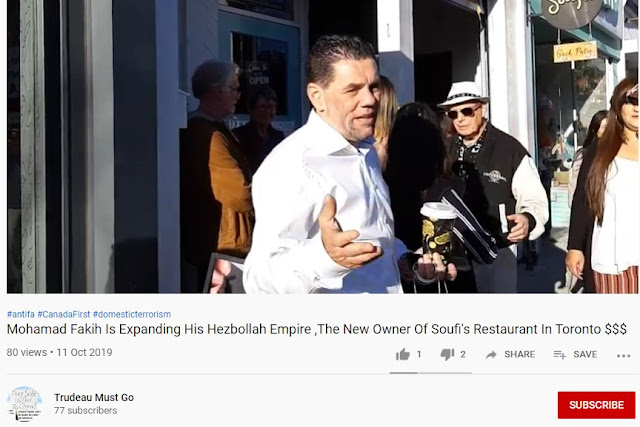 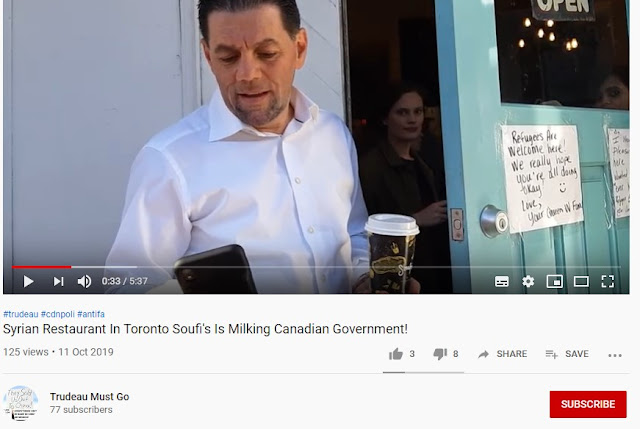 They didn't get very far, with Mohamad Fakih stopping them in their tracks and essentially walking out the door, forcing them out too.

If Fakih is a familiar name, that's because he won the $2.5 million settlement against Kevin Johnston earlier this year.

Fakih, cool as a cucumber, wasn't taking any shit, no matter how hard Dumb, Dumber, and Dumbest tried:
Rick Boswick uploaded his video to YouTube, where some very nice people said some very nice things, and once again, the Al-Soufis were subjected to threats and racism. This time, though, they also had Fakih in their sights.

They should ask Kevin Johnston how well that works. 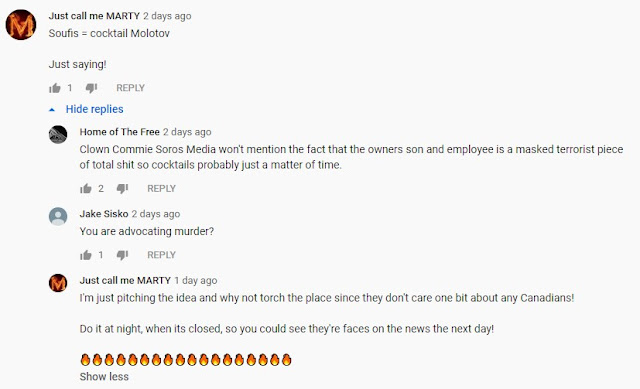 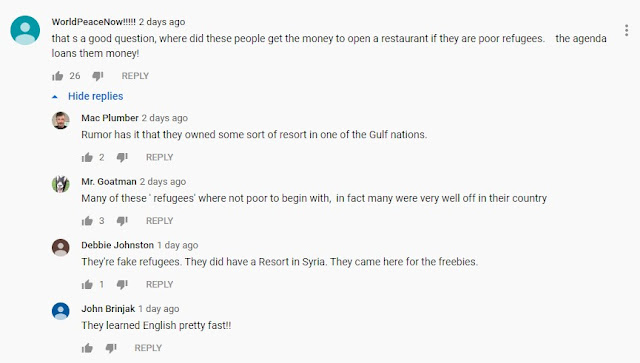 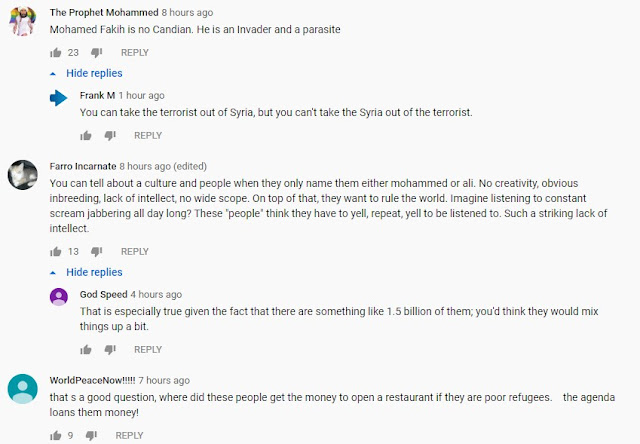 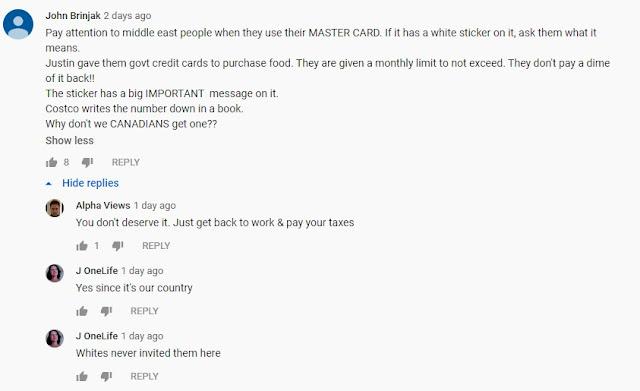 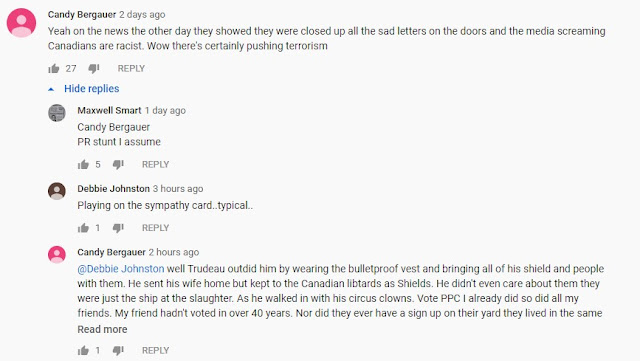 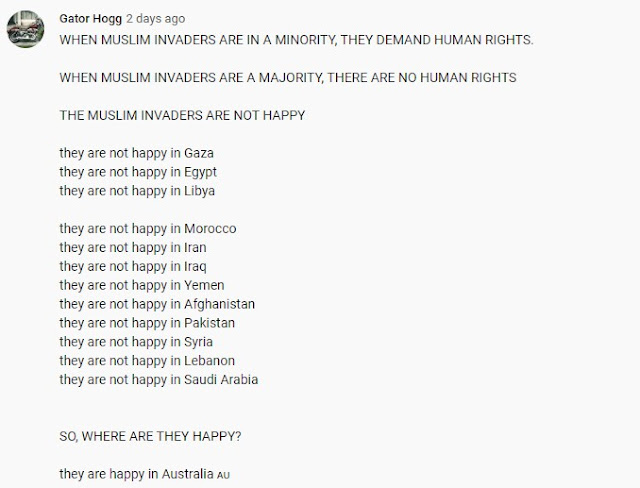 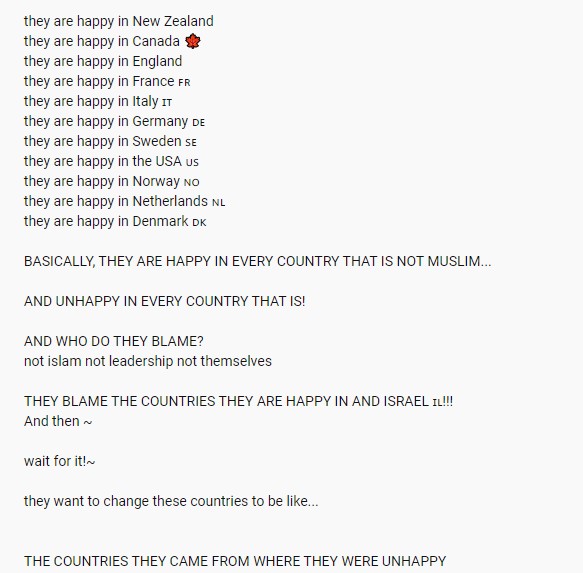 Now, Boswick, Lily, and Jamnisek are under investigation by the Toronto Police Service for their role in the harassment.

The Al-Soufi family is facing new threats as police investigate individuals responsible for the harassment campaign.

Not content with harassing people, they stuck around so Ed could grace us with this gem:

Here's Ed Jamnisek saying that Canada is lost to Islam. This video was taken shortly after he and others were harassing people at Soufi's restaurant. #YellowVestsCanadaIsAHateGroup pic.twitter.com/YKntFj6EcR
— Yellow Vests Canada Hex-posed ☠️ (@VestsCanada) October 14, 2019


And with that, we leave you with a (rather belated) Thanksgiving wish from our friend Lily:

What is going on? You had a thread with Greg Paul in it. I think it was from mid or early September. I had some info to add about him and when I looked for the post I cant find it. The search function doesn't bring up any info on him?? What is going on?