Over the past year, Cosmin Dzsurdzsa, the husband of alt-right campus activist Lindsay Shepherd, has received recent coverage for his previous work as an editor for Charles Bausman's Russia Insider. A central hub for the dissemination of pro-Russian disinformation during the 2016 US Presidential Campaign, Russia Insider was funded by Konstantin Malofeev, the oligarch sanctioned by Canada for his role in funding Russian militias involved in the country's invasion and occupation of Ukraine. Malofeev is also known for funding the activities of Russian political operatives Aleksandr Dugin and Alexy Komov, individuals involved in foreign influence operations targeting western countries. Ever since his public exposure, Cosmin has made pains to self-censor himself as a means to stay relevant though still enjoys signalling his extremism to his followers. He frequently claims to have not known about Bausman's ideological inclinations, that is not true. A VKonkate page Cosmin created during his stint at Russia Insider shows the only person that Dzsurdzsa followed was Holocaust denier Aleksandr Dugin. Past tweets include quotes of American Nazi sympathizers during World War II, including Ezra Pound and James Laughlin. Currently, Dzsurdzsa now works as an editor for the Post Millennial, an astroturfed website cofounded by Jeff Ballingall whose coverage revolves solely around producing partisan propaganda favouring the Conservative Party of Canada. 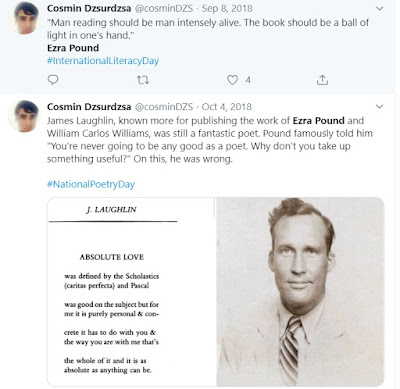 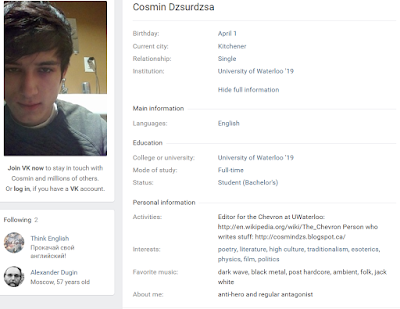 Dugin's sordid past can be found elsewhere. Our preoccupation with this character today lies in his role in Russian influence operations of varying severity, from the invasion of Ukraine, to the 2016 coup attempt in Montenegro, to his follower's orchestration of an arson at a Hungarian cultural centre in Ukraine - an act meant to inflame tensions between Hungary and Ukraine. Dugin's totalitarian ideological framework is a major inspiration on the alt-right. Richard Spencer's estranged wife Nina Kouprianova translates Dugin's works in English alongside her colleague Michael Millerman, of the University of Toronto.

As previously mentioned, Dzsurdzsa is married to Lindsay Shepherd, the infamous alt right campus organizer who has worked to give speaking opportunities to Faith Goldy and Ricardo Duchesne. Both are affiliates with ID Canada, the Canadian branch of Generation Identity. On March 20, 2018, Shepherd hosted a speaking event for Faith Goldy titled “Ethnocide: Multiculturalism and European-Canadian Identity,” a speech based on an earlier interview Goldy had with George Hutcheson, the leader of Students for Western Civilization (SWC). The speech was to be recorded and uploaded to Youtube until a fire alarm derailed the event. Goldy's audience was led outside by Shepherd, with SWC members acting as security for Goldy. In February this year, Hutcheson interviewed Millerman for the SWC Youtube channel. Among their topics were, of course, the ideology of Aleksandr Dugin and supplanting the post-WWII liberal-democratic order.

In September 2018, I passed on information received from one of my assets to ARC Collective indicating that Faith Goldy's mayoral campaign was run by members of Generation Identity Canada (rebranded as ID Canada). Other evidence began piling up, proving the campaign was principally a joint operation between ID Canada and its Toronto campus affiliate, SWC. Campaign expenditure disclosures revealed ID Canada founder Tyler Hover managed the campaign webstore. Hover is mostly known for being a literal cuckold among antifascists when he confided to fellow StormFront users that his Russian girlfriend slept with his close friend when she visited Canada. Three months prior to these revelations, MARTIN SELLNER, a leading figure in Generation Identity, travelled to Moscow, Russia alongside his wife Brittany Pettibone and Lauren Southern to interview Aleksandr Dugin. Generation Identity is heavily influenced by the National Bolshevik movement that spawned Dugin, and Sellner himself has been interviewed in 2015 by the Centre for Continental Cooperation, a think tank founded by Yuri Kofner, a student of the Moscow State University of International Relations. At the same time Southern was interviewing Dugin, Ezra Levant, Southern's former employer, was in Moscow filming pro-Kremlin propaganda. On February 2019, I pointed out and provided information on the various relationships Rebel Media staff had with Generation Identity. Rebel Media was cofounded by Ezra Levant, Brian Lilley, and Hamish Marshall. Marshall currently serves as the campaign chair for Andrew Scheer and also works for One Persuasion, a political strategy firm founded by former Tory staffers which utilizes psychographic information to microtarget voters, in the same vein as Cambridge Analytica. Rebel is known for promoting far fetched and malicious conspiracy theories, including suggesting the Ste Foy massacre was a false flag, Rebel staffer Jack Posobiec "just so happened" to come across emails from French President Emmanuel Macron's 2017 presidential campaign stolen by Russian security services, and having a man who worked for an online white supremacist military surplus retailer shouting Russian propaganda at MP Kent Hehr about Chrystia Freeland's grandfather being a Nazi collaborator. Rebel acts as an amplifier for pro-Russian narratives in Canada's information ecosystem, making it impossible to think of him as anything other than an asset to the Russian Federation.... 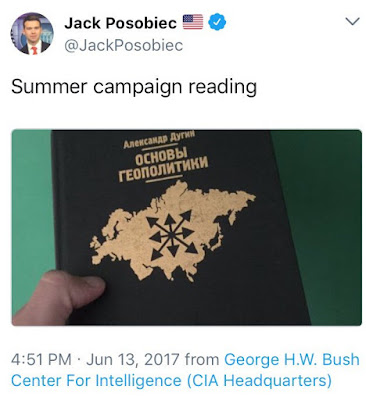 ...which brings us to the point of this article. For three years, I have spent much of my time conducting surveillance and research into the western far right's networking with Russian actors. I have kept a close eye on Dzsurdzsa since his start at Free Bird Media, along with others that worked on the site (ie Students in Support of Free Speech). On occasion, I would even heckle him and Alex van Hamme through Twitter. Dzsurdzsa wasn't the only person writing for Free Bird Media to move on to become an editor for Post Millennial, nor was he the only person involved in actively spreading pro-Russian disinformation. Meet Alexandra Hollenbeck, former student of Moscow State University School of International Relations, former American Section Editor for the Post Millennial, and an unquestionable Russian asset: 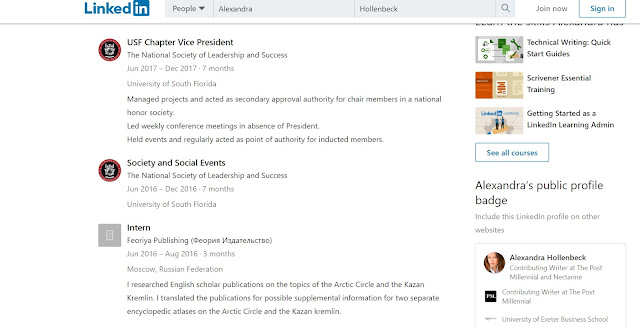 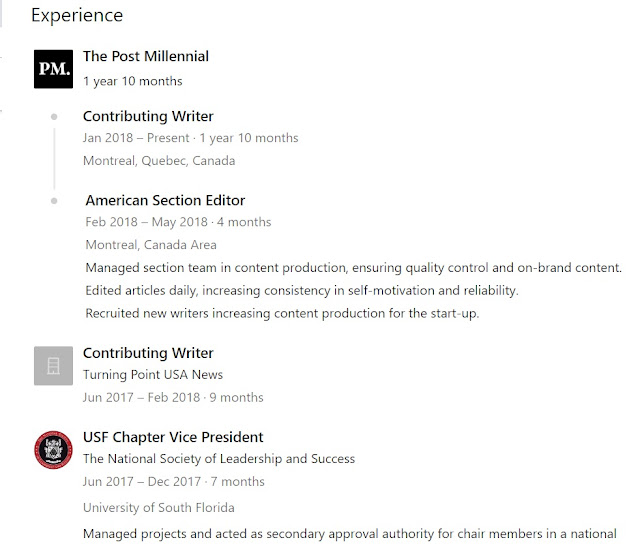 As already covered by Dahn Shaulis, Hollenbeck has been travelling between much of the Anglosphere and Russia. Older articles since scrubbed from Post Millennial by Hollenbeck were extremely inflammatory and included propaganda about white South Africans, claims Donald Trump has been exonerated over accusations of a criminal conspiracy with a hostile foreign power to defraud the government of the United States, and opinion pieces denying the use of bots in Twitter campaigns. In her short and volatile career, Hollenbeck has had documented meetings with foreign dignitaries to Russia, peculiar opportunities for a "student journalist." As Shaulis notes, "Images from March 2019 show Hollenbeck posing in two photos, stating that she was at Putin’s party office and the Russian Duma, celebrating the news that Donald Trump had been cleared of Russian collusion allegations. Her images were posted with the hashtag #russianspylife." Interestingly, there is also a photo of Hollenbeck and Post Millennial staffer Yaakov Pollack outside Mar-A-Lago, celebrating the presidential pardon of Sholom Rubashkin, a white collar criminal with ties to Berel Lazar, a Chabad rabbi and the Chief Rabbi of Russia.


The Port Washington Chabad, known for its patronage by the Kushner family and ties to Russian organized crime, including Tevfik Arif (who is Russian-Turkish by nationality), Tamir Sapir, Rotem Rosen, Michael Cohen, Felix Sater, and Daniel Ridloff. All men were involved in Bayrock, a company central to several Trump "projects," including Trump Tower Moscow. It should be considered peculiar for a student journalist to be travelling all over the world. meeting foreign dignitaries - especially after only attending Moscow State University of International Relations for a short period. 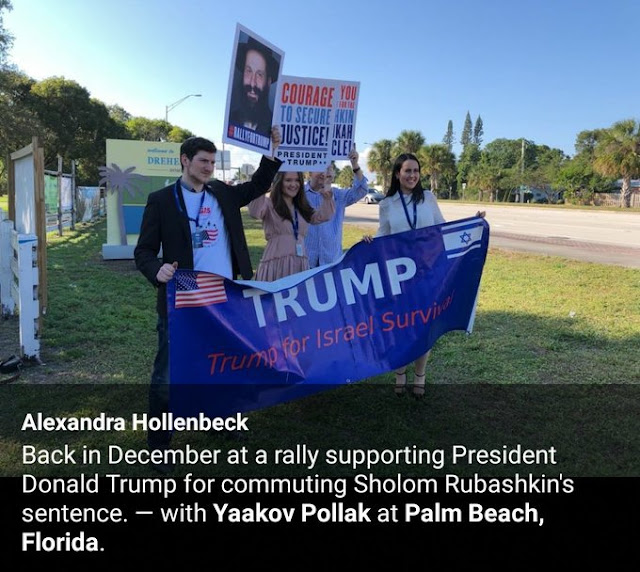 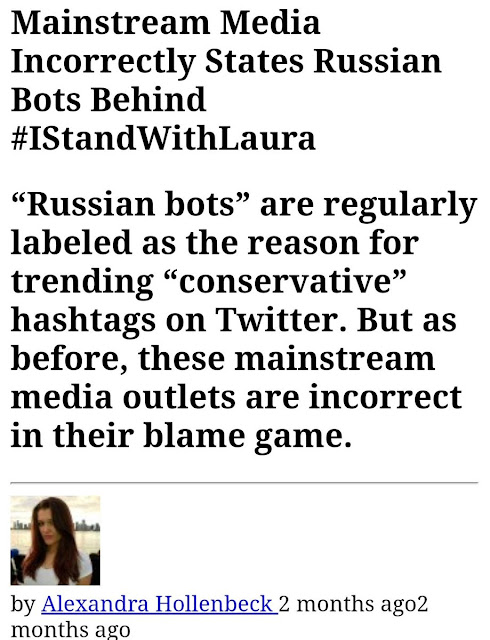 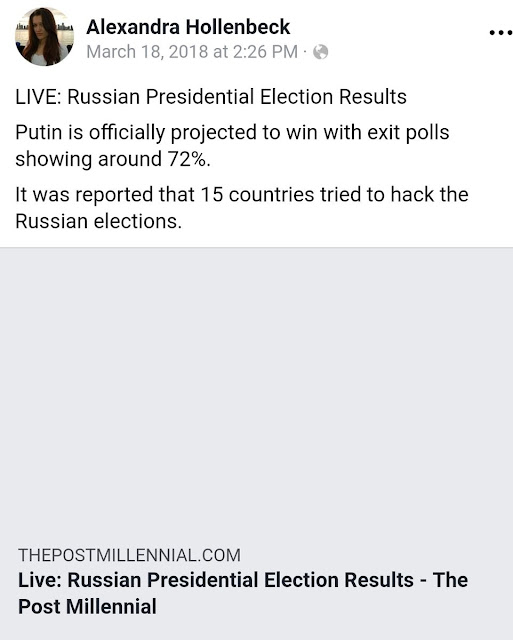 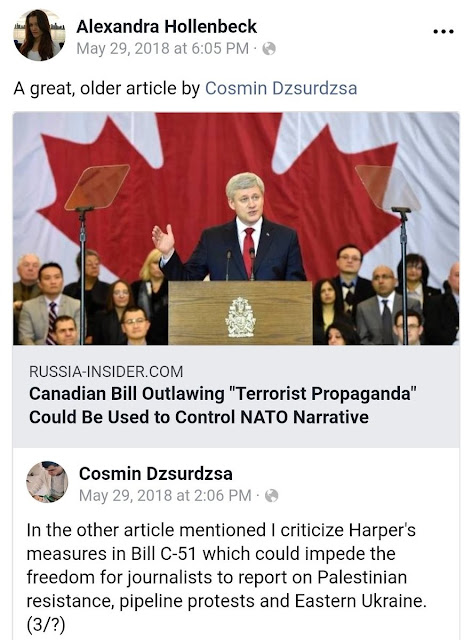 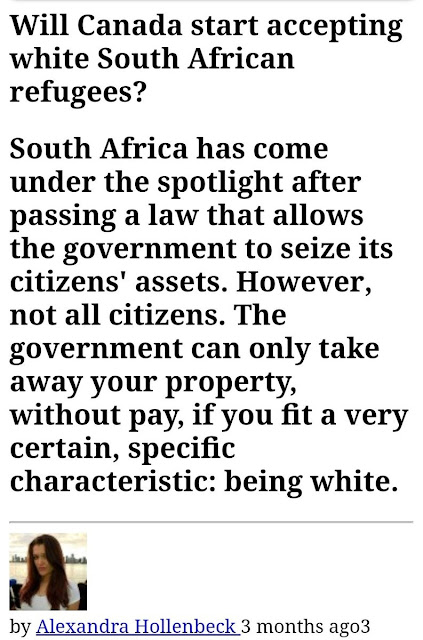 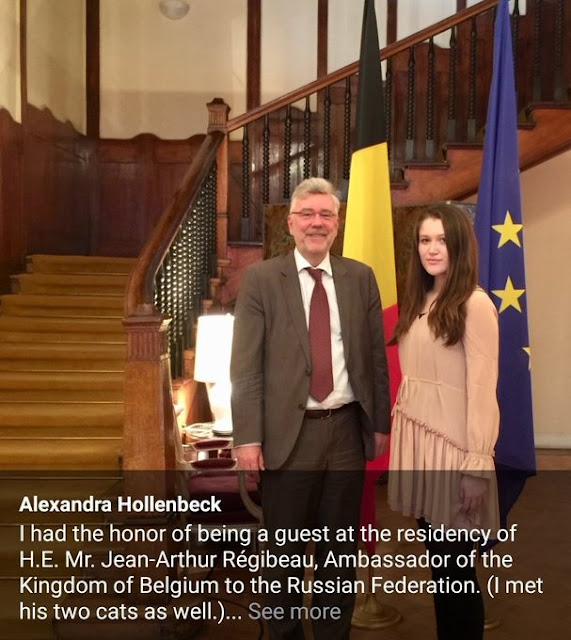 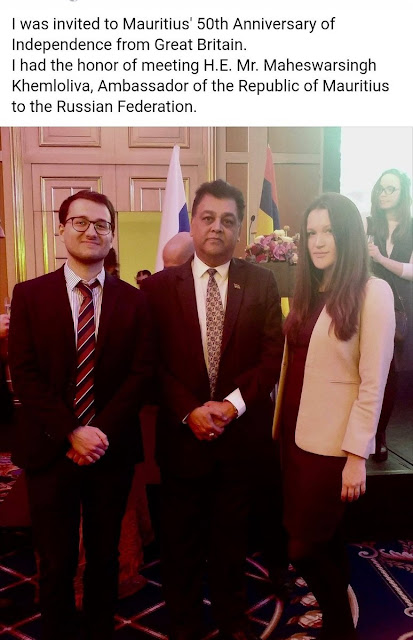 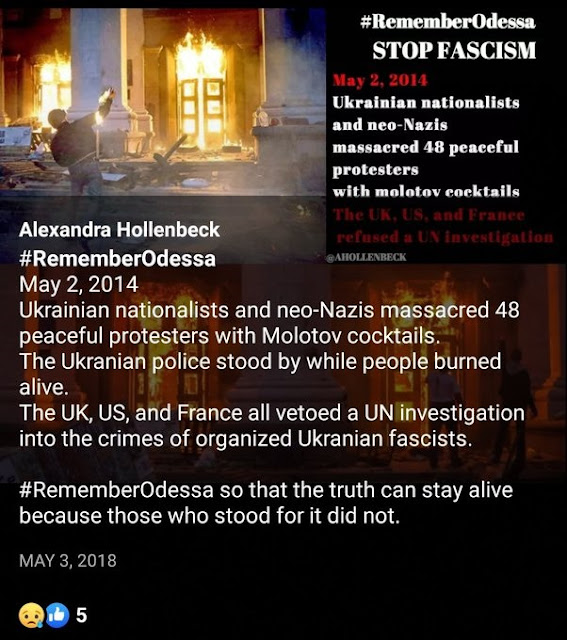 When Mr. Shaulis contacted Post Millennial and TPUSA, they played down any wrongdoing, but silently removed much of Hollenbeck's content from their websites. The content that was removed were blatant examples of disinformation known to be pushed by Russian active measures, including narratives of supposed "white genocide" in South Africa, dismissals of Russian-sourced social media operations, and suggestions of failed attempts of interference of foreign agents in Russia's own elections without evidence. In the past, Post-Millennial co-founder Jeff Ballingall has been dismissive of foreign interference in the Canadian election. Is it really any surprise that he would be, in spite of warnings by our allies and own in the intelligence community?
Posted by Nosferatu200 at 16:11