Paul Fromm protegee Kyle McKee did an interview with CTV concerning the assaults that took place in Vancouver and the arrest of the three Blood & Honour members suspected of having committed the deeds. 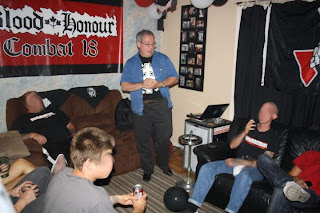 Well, at least McKee has dispensed with the pretext of being opposed to violence:


Kyle McKee told CTV News that he doesn't have "a stitch of remorse" for his own crimes, and expects that the two members of the Vancouver faction of the white nationalist group will continue intimidating minorities.
...
McKee is the Calgary group's central figure. He made a pipe bomb that went off in a Calgary neighbourhood and was charged with beating up a local activist earlier this year.
"You don't want certain people in your neighbourhood, you can ask them politely to leave or you can use violence. I think they're probably more inclined to leave with the use of violence," he said.

"I don't know if you're hoping for a stitch of remorse, but you won't find it with me," he said.

What a complete and total moron. Thank fuck someone else is raising his kid.

So, McKee does not have a stitch of remorse! Not surprising given how lenient the correction system is in Canada. This system was designed for common criminals, not Violent Racists like McKee who is nothing but a Terrorist, no different from Al Qaeda. McKee should be treated like Al Qaeda members and be denied the full Legal Rights and Protections which common criminals receive. Being remanded without trial, in isolation, without any books(??) or TV and no human contact, would deter many of his Nazi buddies from ""keep doing what they are doing"".

I don't think leniency in the Justice system has much to do with it (I actually think it's too lenient). I think laziness on the part of investigating officers had a lot more to do with it. If McKee has been convicted of the bombing rather than just building the bomb, he would've been away for a long time.

McKee is dangerous, yes, but if the Police would simply do their jobs, we don't need to take away anyone's charter rights.

What the hell is wrong with western canada. A lot of sick puppys put there. The governments tough on crime agenda should be renamed tough on western crime. What an ill group of people out there.

If it is considered prudent enough to take away Charter Rights from Brown-skinned Islamic Terrorist suspects, then it should be likewise for White Terrorists like many Neo-Nazi Skinheads. But I agree with you on the laziness of investigating officers. However, I just wonder how much more diligent and thorough they would have been if McKee was a Brown-skinned Muslim.

So the Vancouver chapter is now accepted by the Calgary guys because there outwardly violent. Glad to see what the movement really stands for. Disorganized disfuctional skinheads are never going to be the answer for true nationalism. There's so much more to life than being violent, building an ego for yourself through your own political ideologies.

What a schmuck! I'm sure this interview will serve as evidence in his (surely numerous) trials to come. Hopefully this idiot is declared a dangerous offender and rots away the rest of his useless life.

If he or any of his friends read this, could I please get a confirmation that he would not press charges if people remove him from their hood using physical violence?

As he publicly stated that this is the way he thinks issues should be dealt with, I am looking forward to see him in the Calgary Beltline again.

Kyle, if you should ever offend normal people with your racist presence in the 17th Ave/10St SW area, where I've seen you several times, I'll talk to you and then offer you both options you mentioned. Looking forward to it! Bring along some buddies if you feel safer, I don't mind sparring with up to three opponents.

Just like in American History X on the basketball court, I defeat you, you leave, no questions asked.
Deal?

hahahahahahahahahaha @ Anonymous#8. Kyle only jumps into the fray when the other is already on the way down because of his friends swarming. Have you ever witnessed him fighting? I have. Dude is seriously out of shape. Even a 2 minute round of sparring, he's still wheezing 3 hours later. One on one he's a pussy. Let me repeat that, a PUSSY.

Interesting reference to the "14 words" Mckee chose to use. By the way Kyle, how often do you see your child let alone support her? You are a godamn hypocrite.

(I wrote that slowly so you could read it, you illiterate fucktard.)

@poster 11- So guy with beer in your hand and tattoo on your wrist, what your trying to say is that you're kind of a big deal?