So, Who in B&H Have Been Arrested?

NOTE: We have updated our timeline of racist violence to reflect these recent arrests.

For those readers who might be new to our little home on the World Wide Web, here are a few photos of the two members of Blood & Honour BC accused by the RCMP of engaging in a series of violent assaults:

Shawn Macdonald (right) pictured with Jan, both of whom are with Blood & Honour BC. Shawn was once a member of Volksfront but he and a number of others left to form B&H. Engaged in a long running dispute (online primarily) with the Blood & Honour movement (formerly the Aryan Guard led by Kyle McKee) associated with Combat 18 in Calgary, in part as a result of a wider feud between B&H factions and because of a perception that the violence in Calgary was giving the movement, "a bad name." Macdonald posted on a number of webforums, including Stormfront as "Model" as well as the Hammerskin's and Blood & Honour forums as "Big Mac." He was also a participant in Highland games in Victoria 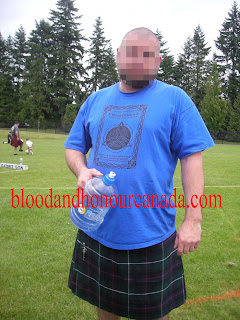