All Is Quiet In "White Nationalist" Land: Part I

So as we often do, we checked out the white supremacist forums to see what is being said about the arrest of the three Blood & Honour members in BC.

After all, we all know that if the accused were of non-European heritage, the denizens of Stormfront and VNN would be all over it and claiming the crime as further evidence that "Whites" can't coexist in a society with 'dem ethnics.

Would it surprise our readers that not much has been posted about the crimes that the three men are accused of? Of course you aren't!

That's not to say no one has commented. There are the usual tepid criticisms leveled at the three men who, interestingly, wrote similar criticisms about the Aryan Guard/Blood & Honour/Combat 18 faction led by McKee (meaning the criticism is more to do with being caught than committing terrible crimes, since Macdonald, posting as "Model" certainly has supported the use of violence against minorities). But the more common responses actually do express sympathy for the victims of these crimes.

Oh. Oh you don't think that the boneheads consider the people attacked to be the victims, do you? Naw! The real victims are the three accused:

We now await the inevitable POW label, because, you know, lighting a guy sleeping on a couch on fire and punching a First Nations woman are certainly acts of war.

Then again, they simple could deny everything and claim it is all a setup: 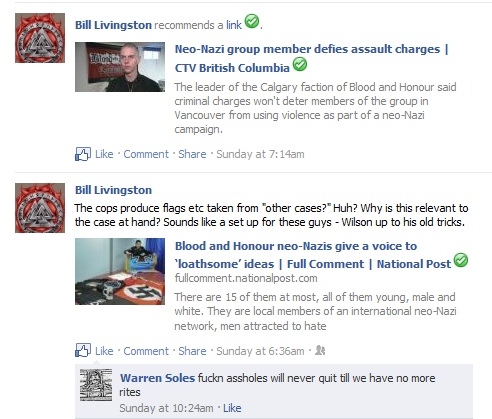 Hey, it's been a while since we've heard from Warren Soles. Looks like his language skills haven't improved much.

Our readers with more knowledge about the webforums these people use might ask if we have anything on from the Blood & Honour forum that Macdonald was a moderator on or the Hammerskin forum. Certainly there was something mentioned there. Right.

Actually, that is an interesting development and one we plan on sharing.

Really wish more people who are involved in the "movement" would start speaking up about the hypocrisy they KNOW exists. Doesn't it make your skin crawl to see this kind of shit and know that you condone it by not calling people out on it?

You want to talk censorship?