Free Speech For Me, But Not For Thee: Part II

Is there a bit of a trend going on here?

This past week a federal court heard arguments for and against Sec. 13 of the Canadian Human Rights Act. Although it's a bit of a simplistic dichotomy, we'll say that on one side was the CHRC and Richard Warman (and their allies) who spoke in favor of Sec. 13 while on the other side Marc Lemire (and his allies) spoke in favor of repealing Sec. 13.

Oh, and that reminds us:
Attending the hearing were a number of the Free Dominion crowd, including Mark and Connie Fournier who have argued, on principle they claim, that Sec. 13 is an violation of the freedom of speech and expression and that anything that would deny people their right to freedom of speech and expression are an affront to human dignity. The following quote is found on Mark's profile on Free Dominion:

As Mark and the rest of Free Dominion support the rights of virulent racists and Holocaust deniers the right to express their views, you gotta know that those views must be especially reprehensible of Mark feels that those who hold them and advocate for them must be severely punished. Right?

What are those terrible, horrible, evil points of view?

A belief in global climate change:

So, to sum up and to paraphrase what looks to be Mark's position:


Perspective 1: "I believe that Jews are the spawn of Satan who run the media."
Mark: "Well, I don't agree but I support your right to hold those views."
Perspective 2: "Blacks are subhumans who should be shipped back to where they came from."
Mark: "That might be offensive but we shouldn't do anything that would hinder this kind of speech."
Perspective 3: "The Holocaust is a lie."
Mark: "That's just an opinion and everyone is entitled to their opinions even if I don't agree myself."


Perspective 4: "I believe, based on rigorous scientific inquiry, that human activities have had an adverse influence on the global climate and we should do something to mitigate the harm we are doing."
Mark: "BURN HIM! BURN THE WITCH! HERESY! TOSS HIM IN PRISON AND LET HIM ROT THERE!"
Or, you know, something like that.

UPDATE: Oh, Maikeru... we thought that you who complained about the integrity of a post (we believe you referred to it as, "document tampering") about Marc Lemire would have a little more integrity yourself: 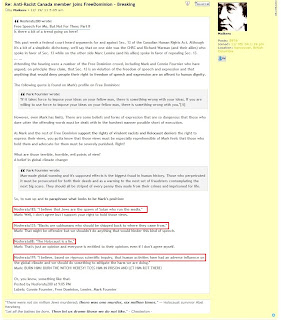 Changing the examples we used to make it appear that we agree with these vile beliefs? For shame! And then, if that wasn't enough, you decide to provide those statements without the context:

We aren't angry with you Maikeru. We're just very disappointed.

Our other helper monkey did provide the entire post in it's proper context though in another thread: 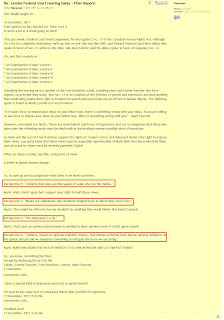 It's too bad you can't trust your fellow Free Dominion readers since you again provide those statements out of context almost immediately after Ogopogo's post:

As a result, you confuse the simpletons who don't have the ability (or willingness) to scroll up to Ogopogo's post:

Kennedy is concerned about bigotry?

Takes a special kind of delusional narcissist to quote himself.

I'm sure he has some sort of conspiracy theory that justifies his hypocrisy.