Racist Poster Campaigns Gaining Momentum Across Canada Thanks to Telegram

A recent article from Omar Mosleh detailed a number of racist poster campaigns across Canada, focusing on the latest shift from ID Canada towards ecofascism. From The Base to Proud Boys to ID Canada, to more generic (on the surface, anyway) posters and stickers, the issue has grown - and it proves that the international fascist movement is collaborating with each other.

Prior to the internet, flyering and postering was the norm. In 2020, with platforms like Gab, Telegram, streaming service DLive, and others, one would think a more effective method would be solely online, yet fascists around the world are opting for relatively low-tech recruitment and radicalization methods while organizing on, and driving people to, the fascist-friendly platforms that will have them. These campaigns serve as a calling card to others; at times a dog-whistle and other times overt. They are a way to signal to like-minded people and antifascists/anti-racists alike - "we're in your community."

White nationalist group ID Canada has posters up somewhere in central B.C. If anyone is in the area please safely take them down. pic.twitter.com/55RnS7NC4L
— YVCE 🧛‍♂️🧛‍♀️🧛‍♂️ (@VestsCanada) March 12, 2020

ID Canada posters have been spotted at 39th and Douglas in Red Deer.

Spotted in Saskatoon today. If any of our followers see any more please tear them down, only if you can do so safely. pic.twitter.com/ZYTyKjAoVl
— YVCE 🧛‍♂️🧛‍♀️🧛‍♂️ (@VestsCanada) August 31, 2019


Based in the UK, the Hundred Handers, have been around for some time, but have recently made the news for co-opting Extinction Rebellion branding as their own to promote ecofascist and hateful content. This is nothing new for them - since January 2020 they have been co-opting XR branding and putting up outrageous stickers and posters to reduce XR's credibility. Their latest archive has 11 XR fakes.

A Hundred Handers post from early January on Telegram 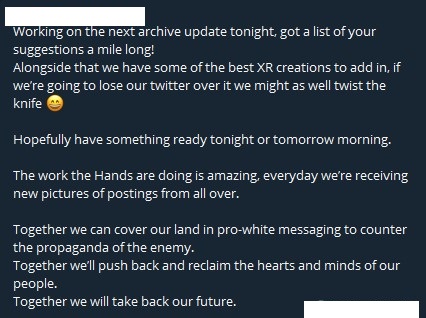 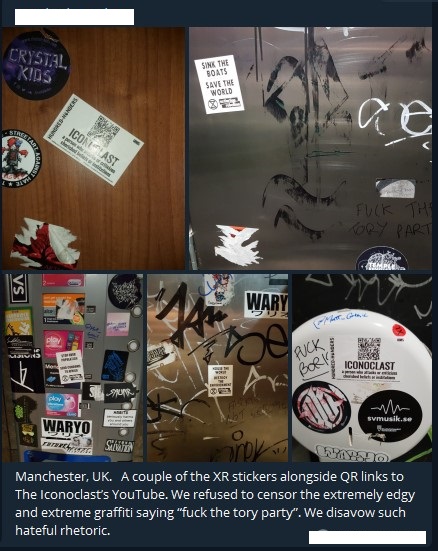 A Proud Boy-run Canadian Telegram channel has also promoted this tactic, within a post of this specific incident. The irony of "Prosemitic Groyper" referencing the "logical evil conclusions" of leftist efforts while ignoring the fact that calling for a "white" country means either mass deportation or genocide isn't lost on us. 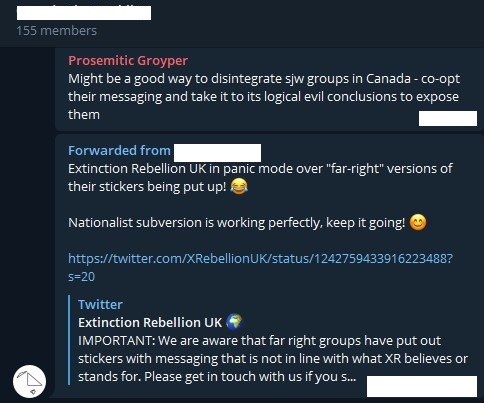 The Hundred Handers been kicked off Twitter, but claim they don't care - Telegram is much more effective.

Their MO is to release an "archive" of stickers every month. Included is regional/country specific stickers as well as "unaffiliated" stickers, such as "It's Ok To Be White," and others. It's unknown at this time how many IOTBW have been distributed by their following. They also target feminists, the LGBTQ+ community, run-of-the-mill conservatives, and others. Some of their stickers reference the JQ (Jewish Question) and "Blood and Soil." Others are rather benign, and include a QR code. Many are in other languages, such as German and Spanish.

They have produced Canada specific content - including the demographic poster recently found in both Whitby, ON in early February and Saskatoon, SK in early March. The poster is titled "The Great Replacement," and is found in a folder titled "Canadian Demographics" in their March archive - an indicator that there is enough support here to warrant country-specific content, along the lines of Italy, Germany, and Spain.

There are other examples, too. Recently stickers attributed to them were found in the Port Credit Go Station, which they erroneously attributed this to France on Telegram. We were able to confirm from the ad in the background that this is, in fact, in Port Credit. Also, the ad language and the train schedule is in English. 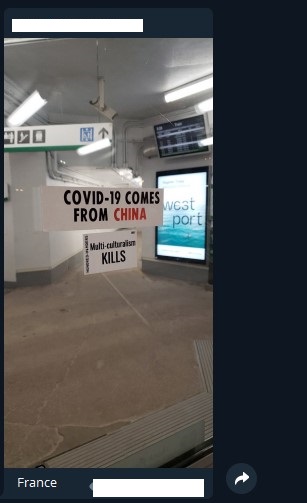 
Even more recently, stickers attributed to the Hundred Handers, and referencing The Noticer were found in Edmonton:

Over the last couple of days in Edmonton, people have been finding stickers from hate groups such as the Noticer and Hundred-Handers.

The Noticer is an antisemitic, white supremacist Telegram channel that exists to antagonize and harass Jews, and they appear to have officially collaborated with Hundred Handers. 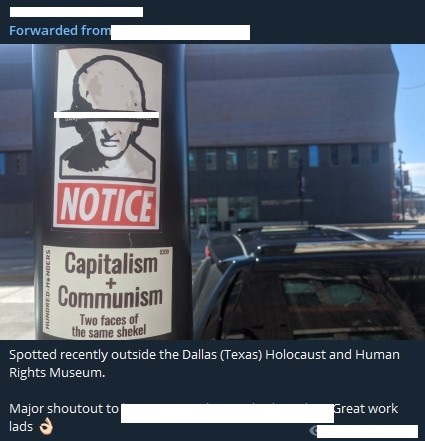 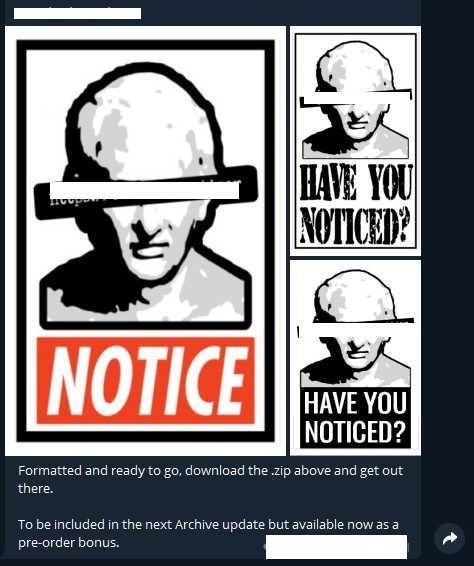 Hundred Handers often troll and mock people for calling them racist, and on a YouTube live stream have stated they give tips and make efforts to "stay on the right side of the law," and anything that goes beyond that are "bad actors" trying to impersonate them. This isn't surprising - fascists will always accuse their opposition of doing exactly what they do.

One major problem that often occurs with these postering and stickering campaigns is that in a blind attempt to portray "all sides," media will provide these groups a platform. As a result, groups like Hundred Handers have declared that media is doing promotion for them. 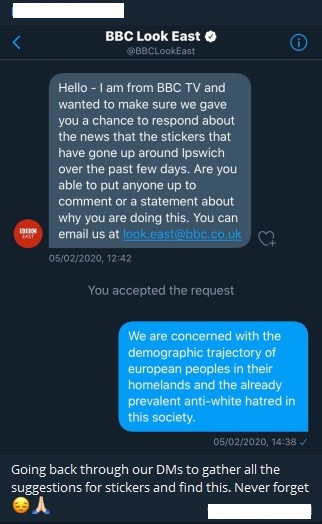 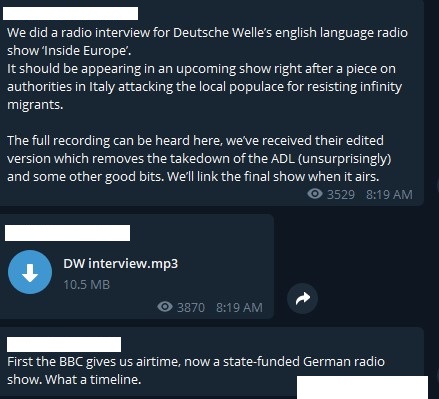 The Hundred Handers are one of many fascist groups happy with the attention they're provided by media. The Proud Boys were thrilled when CTV aired their full, offensive, and outrageously fallacious statement - unchallenged. 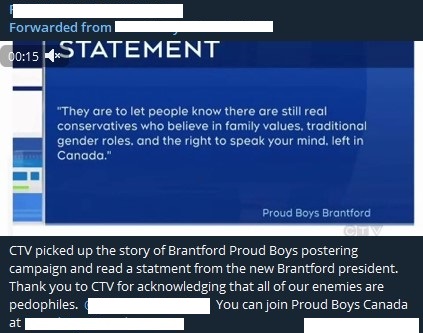 Proud Boys, pleased that CTV ran their statement during a story about their posters

This serves as a stark warning for media - by allowing a statement without challenge, you are providing them a platform.

On Telegram, the Canadian Proud Boys channel (likely run by Tim Kelly) regularly shares their postering and stickering campaigns - and boosts others, such as ID Canada. It seems ID Canada is quite reliant on the Proud Boys boosting their efforts, since their own Telegram channel is rather stagnant at a whopping 38 members. 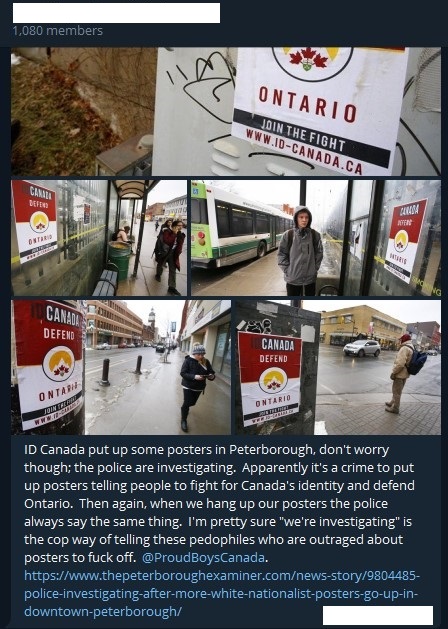 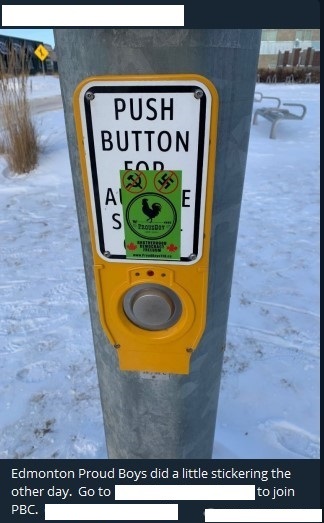 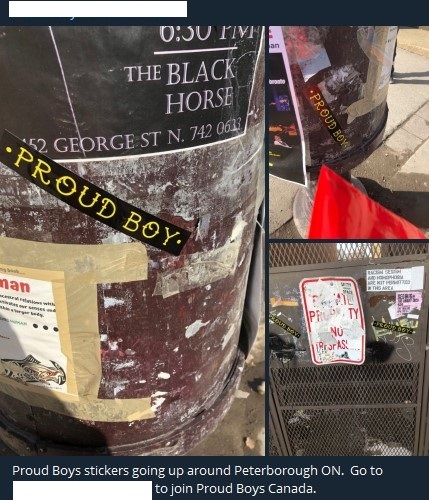 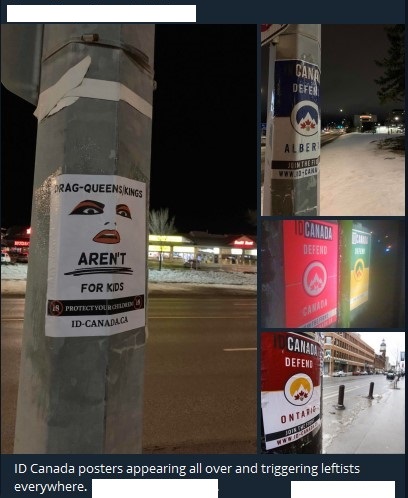 There is a secondary Proud Boy affiliated Telegram channel, run by Tim Kelly (aka "Rick the Man") and "Blayze," another Proud Boy, and whose members include Dean Clifford, Joey DeLuca, and Andre Chiasson. 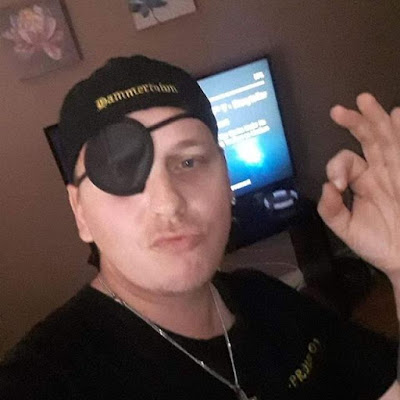 "Blayze," one of the admins of the offshoot Telegram group along with Tim Kelly


The group has also promoted the Hundred Handers, an international, loose collective of white supremacists that put up posters and stickers in various countries around the world. The first mention of Hundred Handers in the Proud Boy offshoot Telegram group was on March 23, 2020, however instances of Hundred Handers has been spotted around Canada in the months prior. 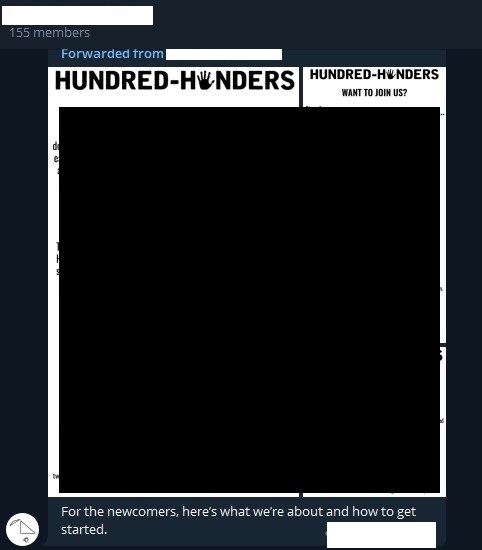 The offshoot Canadian Telegram group itself is a mish-mash of Canadians and some Brits, with a few of the most prolific users sharing antisemitic and racist content while complaining that people call them racist. 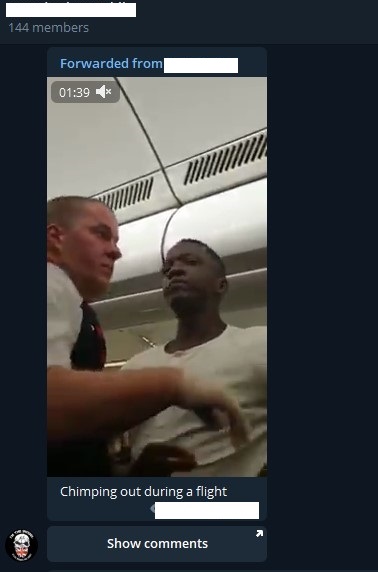 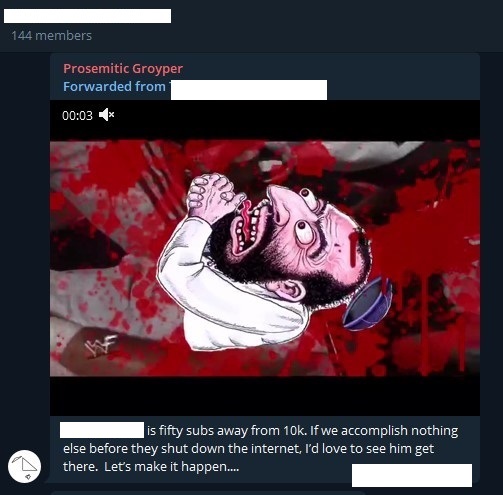 A post featuring The Noticer, an antisemitic channel that collaborates with Hundred Handers 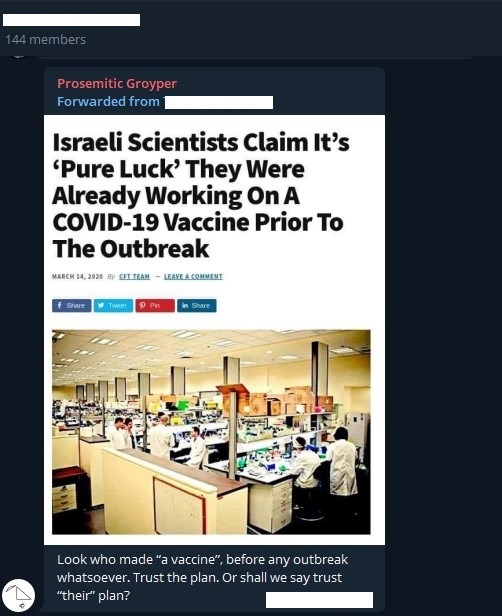 As always, if you come across posters or stickers, please cover them up or remove them, if it's safe to do so. Also, please keep in mind that efforts have been made to spread fakes targeting both other organizations and antifascists.
Posted by Yellow Vests Canada Exposed at 18:43