In a video uploaded to YouTube on March 22, Derek Harrison (Rants) of Plaid Army framed a new clip as a being about "personal responsibility," showing what Harrison claims to be examples of people who did not take personal responsibility and therefore are at fault for what happened next. Harrison, however, uses this narrative to spread transphobia and misogyny.

Before we get to the video itself, the comments are fairly standard:

As did Mike Kirkland 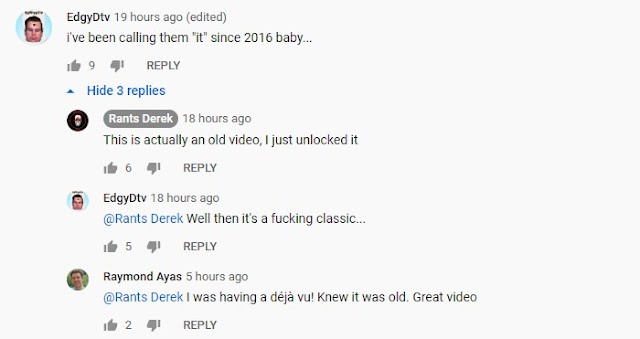 And London, Ontario amateur comedian Dan Sleno, aka EdgyD,
a newer member of Plaid Army, who we'll get to in a later article

That's true - it is an older video. Initially, it was posted to YouTube, which according to Harrison, deleted it. He then uploaded it to BitChute in February 2019.

Comments from the original BitChute upload: 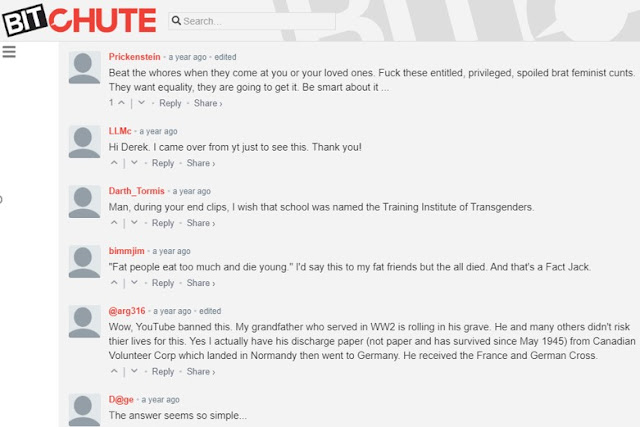 He uses this video to poke fun at people from previous viral videos, and introduces his "new pronoun," the clever and pithy "it," before showing a horrific attack in Australia by a trans woman in a gas station. The purpose isn't to highlight how the people in the gas station were to blame by not leaving when the woman with the axe enters, although he makes that claim too.

It's clear that the purpose is to incite hatred toward trans people, as if people who happen to be trans are expected to be exempt from the gamut of types of people across the human condition, including sometimes violent ones. This is nothing new. Examples of bad, outrageous, or violent behaviour are often used to paint trans people as a whole. Harrison just plays into that.

Harrison continues on, showing a video of an attack by a man on two women in LA (which he erroneously refers to as being in New York.)


Now most people right off the bat are saying 'that motherfucker shouldn't have been hitting girls and you shouldn't hit women.'

No. Girls? That's your fault.

If either one of these girls had ever been hit or struck before on their life they would not go after a man that size. Do you really think this guy just started laying bitches out at the hot dog stand or do you think there was something before that?

Watching these two little chihuahuas trying to attack this rottweiler reminds me of another clip I've seen. What do you think's gonna happen to it? Now you want to act surprised?


The woman, whom NBC4 is not naming to protect her identity, was out with her friend when they stopped for street hot dogs. She said they noticed a man being rude to a hot dog vendor over the $6 cost. She said another vendor offered the man a free hot dog, but when he did not stop, the woman and her friend spoke up.

"Me and my friend said something like, 'Just leave.'" The woman said he punched both of them at least once before additional blows were recorded by a bystander's cellphone camera...

Harrison thinks that speaking up and trying to get a rude customer to leave a hot dog vendor alone and take his free hot dog is deserving of being beaten up - if you're a woman.

The last part of the video is Harrison showing various websites - including the article cited above:


Harrison knew the context of the story - he just decided that the women are at fault because women shouldn't step up to a big man, even in situations where it is reasonable to do so, and if they get assaulted, that's on them.

It's a disturbing message from a man with a university-age daughter.
Posted by Yellow Vests Canada Exposed at 17:54