A Dalhousie University event featuring Romeo Dallaire and his organization Child Soldiers this week drew the ire of the Canadian far-right, due to the inclusion of Omar Khadr.

Despite the amount of online chatter, only a few people showed up to the event to protest in person. One of those people was Jeremy Mackenzie, a Nova Scotia-based former combat veteran with the Canadian Armed Forces.

His one-man protest was quickly lauded by those across the conservative spectrum, from run-of-the-mill pro-military folks to the names we recognize from far-right spaces. 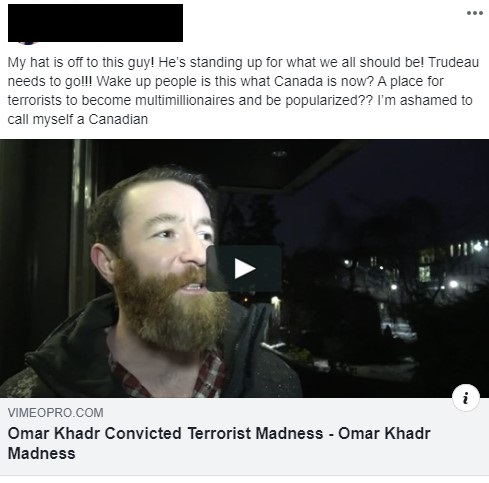 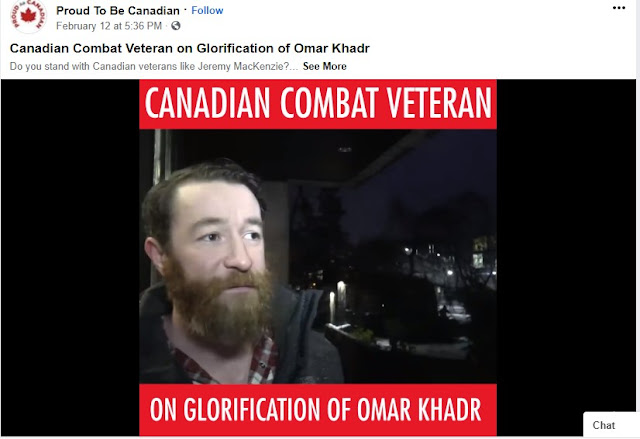 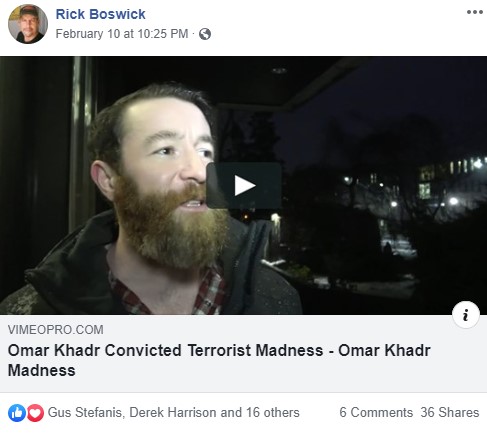 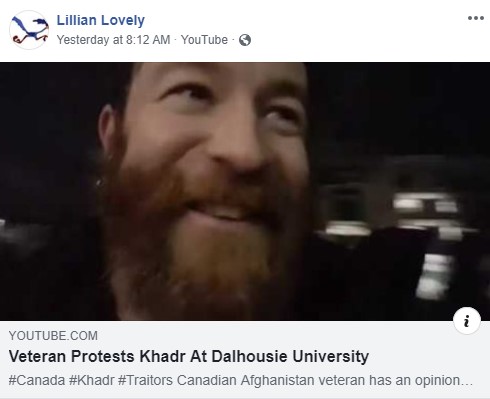 Digging deeper into Mackenzie, it's soon clear that his views are much more extreme. He regularly espouses antisemitic conspiracies, parrots Holocaust denial lines, and disparages Jews and Muslims, in addition to promoting hate literature. On Twitter, he has claimed "You can't vote your way out of this...the only viable solutions are illegal and I'd be jailed publicly for saying them" - a variation of "there is no political solution," a rallying cry of accelerationists, often tied to "the boogaloo."

Mackenzie and friends sometimes invite guests to share their streams, such as antisemites and Holocaust deniers Ryan Dawson - on International Holocaust Remembrance Day, no less - and E. Michael Jones, and white nationalists Henrik Palmgren and Lana Lokteff of Red Ice TV (which has been banned from YouTube twice for hate speech violations.)


* * *
Note: We've chosen to share audio clips of his live streams only.


On the same feed, Mackenzie told another vlogger that Schindler's List is fiction, promoted holocaust denier David Irving, and referenced the common antisemitic "they," and railed against the casting of the 2016 movie Denial, claiming he was unfairly cast as an unattractive man while the lead female was attractive.


Mackenzie "understands their thinking," referring to the Nazis, as well as a healthy dose of historical revision.


On a January stream with Harrison, Mackenzie promoted the book Day of the Rope, a favourite of ultra-violent neo-Nazi terrorists in organizations like Atomwaffen and The Base, and considered a modernized re-imagining of the The Turner Diaries by William Pierce. Named after a phrase in The Turner Diaries, the phrase "Day of the Rope" is often seen in memes and social media posts in accelerationist channels.

The Turner Diaries is classified as hate literature.

Timothy McVeigh used it as inspiration for his attack in Oklahoma City, which killed 168 people. The notorious white supremacist terrorist group The Order was heavily influenced by The Turner Diaries.

Mackenzie shows that he has a hard copy of Day of the Rope. 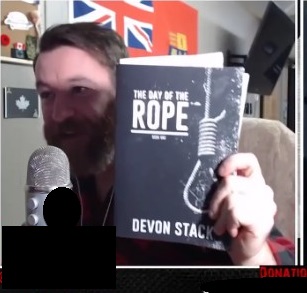 Mackenzie holding up his hard copy of the hate book, Day of the Rope, based on The Turner Diaries by William Pierce

Harrison claims a technical glitch is due to his "naming the Jews."

Mackenzie and Harrison often speak in code, as Mackenzie admits. They refer to Jews as "blueberries" and "left-handed eskimos," and Mackenzie refers to "Tusken Raiders," a Star Wars reference to "sand people."

"Blueberries" is likely a reference to the "Blue Men," and "Blue the Jew" often seen on 4Chan's /pol/.

On a second appearance with Red Ice TV, Mackenzie claims that hundreds of churches have been burnt across Canada and replaced with mosques, indicating this is a "replacement."

On the Ryan Dawson stream, Mackenzie agreed with Dawson's assertion of the ZOG (or "Zionist Occupied Government," a common white supremacist/neo-Nazi trope.)

And referred to "left-handed eskimos" and "blueberries."

Mackenzie and Dawson talk about "zionist bankers," "blueberries," and Dawson refers to "zem," a play on "zionist" and "them," with Mackenzie again promoting antisemitic conspiracy theorist Adam Green.

At the end of this stream, Mackenzie calls the Nuremberg Trials "a kangaroo court." He goes on to say that Goering made too much sense, and that's why they killed him, complaining that it's a trial by his enemies (Goering had said "This is a political trial by the victors and it will be a good thing when Germany realizes that.")

Speaking with antisemite E. Michael Jones, Harrison thanks Jones for "making the connection" between Jewish landlords and antisemitism in New York. Jones says "the cause of antisemitism is Jewish behaviour," and Mackenzie murmurs "yeah."

Harrison asks about The Protocols of the Elders of Zion, which is universally accepted as fraudulent hate literature. Mackenzie mocks those who consider it a hoax, and calls it a "playbook."

Mackenzie, Harrison, and others are just a few of the people promoting these ideas. Mackenzie's YouTube channel is monetized - he makes money off this. He's been promoted by Faith Goldy and Gavin McInness, and hosted banned channels.

It's time YouTube, and others social media platforms, are held accountable.