The October 21 "Trudeau Must Go" rally organized by Ronny Cameron in Nathan Phillips Square  started off very shaky, but as a result of groups such as the Northern Alliance showing up later to bolster their numbers and equaling those of the counter-protesters, Cameron, Myatt, and others involved came to view it as a massive success.

Unfortunately, and though I don't wish to prognosticate too much, it may possibly also have been the high point of their nascent movement based on events that have occurred afterwards.

For example, although Cameron had claimed that his rally did not include members of far-right, racist, groups, a number of reports and extensive evidence published on this blog and elsewhere indicates that his claim is simply not true. Also, Ronny himself hasn't been immune to pushing not so subtle white nationalist propaganda himself: 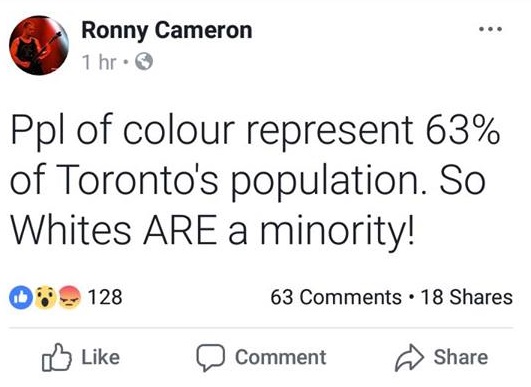 Recently Cameron has also gotten involved in the 4Chan campaign to push white nationalism with what on the face of it appears to be an innocuous message until one comes to learn the rationale and motivation behind the effort; some of those involved in the October 21 rally are active participants: 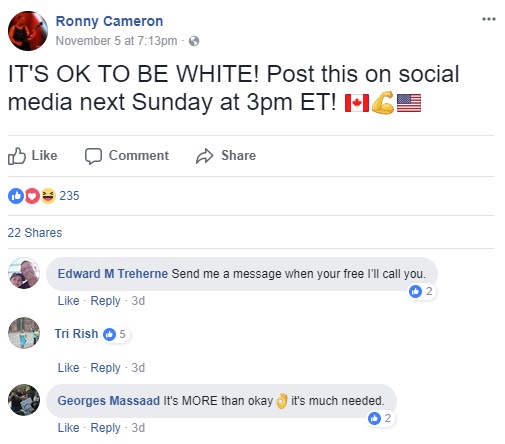 Today Cameron decided to be far less subtle and has started to promote a white nationalist trope that has become familiar to all of ARC's readers: 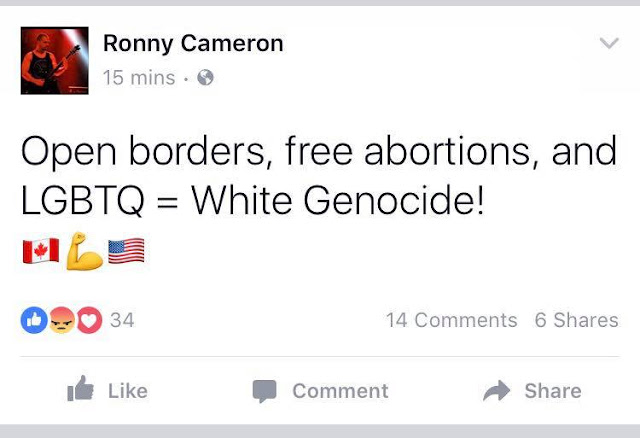 ARC dealt with this particular trope back in June 2011. It is a simple mantra for the simple minded, so well suited for someone of Ronny Cameron's pseudo-intellectual level. It is also supported by at least a few of his followers: 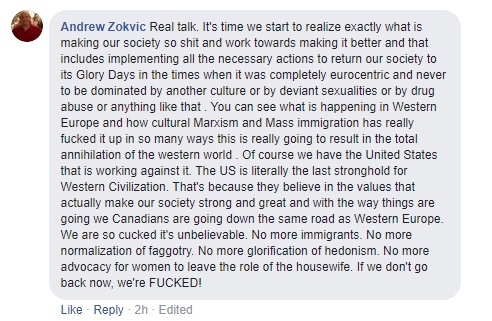 That all being said, Ronny remains magnanimous when it comes to "da gays": 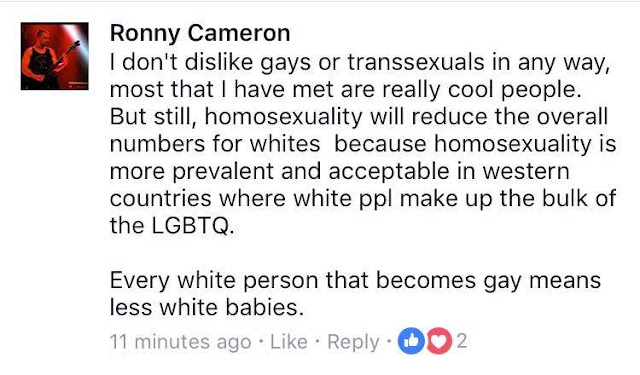 That's right. He likes the gay and transexual people he has met, but they should be aware that they are responsible for the downfall of western society. Other than that, some of those deviants are peachy keen.

Yeah.... I'm not even sure that qualifies as a backhanded compliment.

There is however a bit of a kink in Ronny's whole "white genocide" shtick. While he seem comfortable blaming immigrants and people of colour, the LGBTQ community, and feminists who loves them their abortions for the non-existent "white genocide," Cameron doesn't seem to realize that there's a part of this particular white nationalist trope that will soon prove to be rather awkward and inconvenient for him:

Just as a bit of background here, Eric is a member of the Northern Guard Facebook group....

.... and at least a tacit supporter of the Ku Klux Klan as evidenced by this photo: 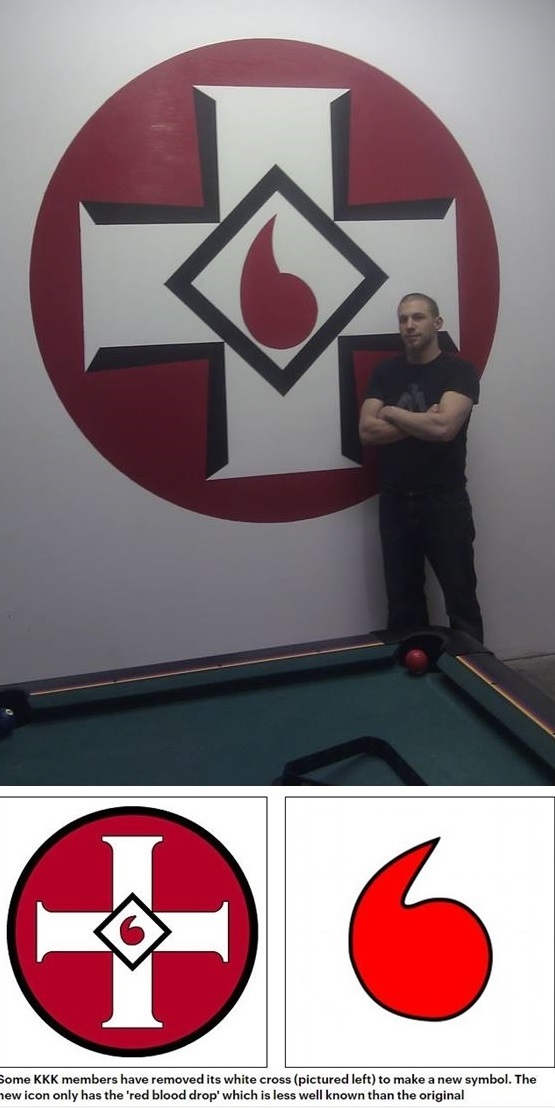 Hence, his comment regarding "race mixing" comes from a deep seated ideological opposition to miscegenation which sort of turns out to be a bit of a problem for Ronny Cameron.

ARC has never written about Ronny's partner and after this article I don't plan on doing so again. By all accounts based at least on what I know she has no involvement at all in Ronny's activities and may also be happy about any of it.

But just because ARC feels uncomfortable bringing her into these discussions, that doesn't mean that Ronny isn't willing to use her for his own political and ideological purposes.

You see, Ronny's partner (at least as of this article) is bi-racial. Ronny has used her existence in his life to attempt to deflect accusations that he holds racist views (you know, just because he happens to associate himself with racists, Islamophobes, antisemites, and bigots). How many times have people heard Ronny proclaim some variation of, "I'm dating a black girl so I can't be racist!" before.

When confronted by a KKK supporter, Ronny's argument shifts considerably:

So, he's suggesting the only reason he's with his partner is because he can't find someone of the "correct" ethnicity so he settled on a woman with whom any possible children resulting from the union will at least appear acceptably white?

Oh, but he did tack on that he loves her, so I suppose he thinks that's his saving grace.

It is somewhat difficult for me to put into words how much of a douchebag I think Cameron is at this point.

That said, neither St. Cyr nor Poulsen (another person who commented) buy his argument anyways: 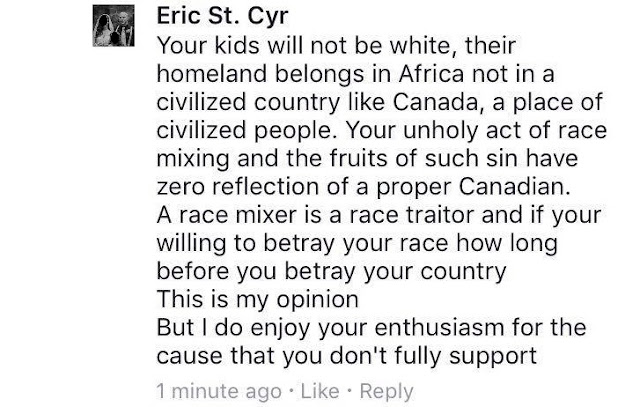 Ct. Cyr also notes Ronny's own shift in positions from as recently as August: 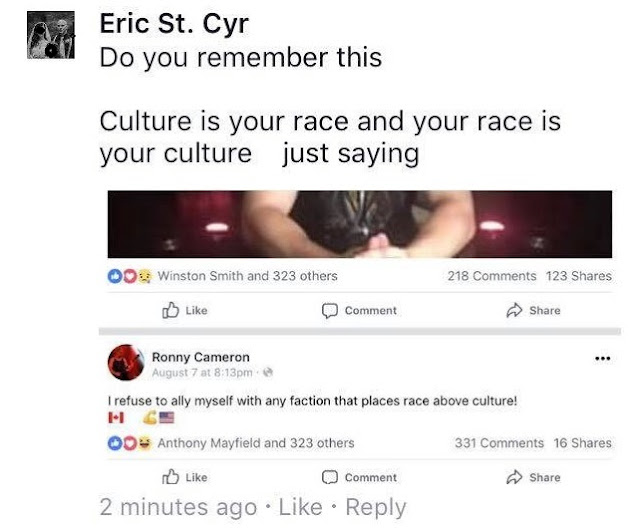 Now if you were to go to this thread on Ronny's Facebook page, you will notice that this exchange is no longer present. Ct. Cyr noticed as well:

Ronny bravely ignored him and continued to move the goal posts:

Just because you say it Ronny doesn't make it so.

It also doesn't make you look like less of an intellectually bankrupt and dishonest bigot.
Posted by Nosferatu200 at 00:07

Why are you so obsessed with us? Dayum

Because ya'll interest me.