In the meantime, news that has sent the boneheads into an apoplectic rage:

Neo-Nazis have been paying annual visits to the grave of Adolf Hitler's deputy in the Bavarian town of Wunsiedel
Siobhan Dowling in Berlin
guardian.co.uk, Thursday 21 July 2011 15.27 BST
For the past two decades, every 17 August has seen the small Bavarian town of Wunsiedel become overwhelmed by neo-Nazi pilgrims. The far-right gathers to commemorate the death of Rudolf Hess, the Nazi deputy to Adolf Hitler, who was buried in the town cemetery.

Now officials in Wunsiedel are hoping they have come up with a way of keeping the rightwing hordes away. In the early hours of Wednesday morning, Hess's remains were exhumed and the gravestone – which read "Ich hab's gewagt" or "I have dared" – has been destroyed.

With the agreement of his family members, his remains were then to be cremated and his ashes scattered at sea. The opportunity to remove the grave came when Hess's granddaughter applied for a 20-year extension of the grave's lease, which was due to expire in October.

"We decided not to extend the lease because of all the unrest and disturbances," said Peter Seisser, the chairman of the parish council.

Although some relatives initially objected to the exhumation, negotiations between the church's pastor and Hess's granddaughter resulted in the agreement to remove the remains from the town.

The far-right has long considered Hess to be a "martyr to the Fatherland" and they rallied in Wunsiedel for their first march in his honour in August 1988.

One of Hitler's closest aides, Hess was captured after flying to Scotland in 1941 in a failed attempt to convince Great Britain to negotiate a peace agreement with Nazi Germany.

He was convicted of war crimes at the Nuremberg trials and sentenced to life imprisonment. Hess was the sole inmate in Spandau prison in the British-occupied part of West Berlin when he killed himself on 17 August 1987 at the age of 93.

Wunsiedel's Protestant parish council reluctantly agreed at the time to honour his final wishes to be buried with his parents in the cemetery.

However, local people became increasingly annoyed with the town's status as a Nazi pilgrimage site. In 2004, the mayor, Karl-Will Beck, launched the "Wunsiedel is colourful and not brown" campaign and, together with town councillors, church officials and citizens, he tried to block the neo-Nazis from gathering at the grave.

The German parliament passed an amendment in 2005 to the existing legislation on incitement to hatred, specifically to prevent such gatherings. Otto Schily, Germany's interior minister at the time, said it was done "in solidarity with the democratic public of Wunsiedel".

However, this failed to solve the problem and the neo-Nazis kept coming. "The Hess marches may have been forbidden but groups like the far-right National Democratic party could still hold demonstrations on other issues," Seisser told the Guardian.

He hopes the removal of the remains will put an end to the annual invasion. "At least the pilgrimage site for the radical right has been removed," he said. "The grave no longer exists."
Suffice it to say, the boneheads aren't dealing well with this bit of news as indicated by this small sample of responses: 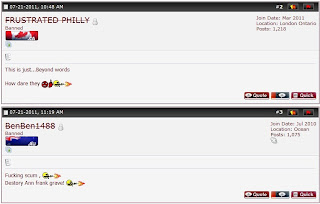 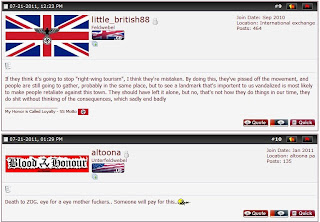 Look here you slimy cunts, you will never amount to anything worthwhile and you will NEVER 'take revenge' or 'make someone pay' for what has happened to the Hess grave site. You know it, we (misc anti - racists) know it, and the public as a whole knows it. All your gonna do is wet noodle & poodle routine and complain about it on the forums, around cheap booze, or whatever other dumb ass might have an open ear to hear.