Truth be told, you weren't all that newsworthy. The post by a former member of the military implying a desire to harm the POTUS (this guy) was really what caught our attention. By the way, here's his latest:

Even in this case, it isn't April's verbal diarrhea that caught our attention, it's this guy: 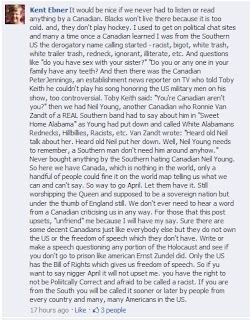 
"Blacks won't live there because it is too cold."
Is that a fact? We're afraid that objective evidence chooses to disagree with you:

"and, they don't play hockey."

Dude, did you think you might just want to check these things out BEFORE you write your thoughts down?

Alright, we admit that most of this was pretty silly, and the majority of Kent's post is an incoherent, rambling stream of consciousness. But this one had us laughing pretty hard:

"So here we have Canada, which is nothing in the world, only a handful of people could fine [sic] it on the world map telling us what we can and can't say."
Really. You really think that most people would have difficulty finding Canada, the world's second largest country, on a world map. Really.


Hey, we had heard the American school system was in trouble, but we had no idea. Or perhaps it's just the boneheads who struggle with geography?


But we're here to help. You want to find Canada, we'll provide you with some easy to follow steps:


1. Find world map. Do not eat, drool on, or shit on world map.
2. Get second world map because you couldn't follow direction #1.
3. Find the United States on the world map. No. That's Australia. No, no, that's Mongolia. And that's Brazil. Jesus, that's Djibouti! Hell no! Fuck, that's a coffee stain! Are you even trying anymore? Wait! Stop! We'll point to it for Christ's sake! Here! Here it is!
4. Okay, now that, "you've found" the United States on the map, look to the north of the United States and you'll find Canada. Fuck! Don't look at the damn ceiling! On the map! ON THE MAP!!!!


Wow. That was a lot harder than we had thought it would be. 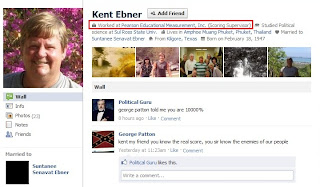 That was SO FUNNY, man!! LOVED it!! I always say that Neo-nazis and Racists are their own worst enemies. No body knows what morons they are, until they open their mouths or express themselves in any fashion. Then the rest of us just point at them and burst out LAUGHING.

Nothing like criticizing some stupid hicks to get them quoting Skynyrd LOL. Way to completely validate what Young was singing about.

Lol. WOW can i be involved in all the full, i hate racist bigots too and have one living three doors down i deal with from time to time....half white/half first nations here, i will also be blogging on racism today,

I hate to point this out, but it appears that your pal Kent lives in Thailand and is married to a Thai lady. Kind of odd to be racist scum and marry outside your race... or is it just black people he hates?

Ya.... before anyone starts talking about van Zant and Young a fair bit of researching should be done. Despite the content of 'Southern Man' and 'Sweet Home Alabama' both men recognized each others ability, talent, etc, and weren't some vindictive arch nemesis types people might believe them to be based on the assumption of their lyrics...

Live up to our low expections indeed. Why is it that racists can so rarely form a cohesive and grammatically correct sentence? Is it the lack of formal education they've been found collectively to have?